A first person dungeon crawling RPG by Kadowkawa games has set it's "gaze" (See what i did there) on the PS Vita. Published by NIS over here in europe it's time to see if this has what it takes to the be premier RPG on the Vita & just how it stacks up against it's rivals!.


As stated Demon Gaze is a first person dungeon crawler, the emphasis on these games is the grind & exploration as apposed to character & story development. Demon Gaze is set to change this by offering a substantial amount of story content & a fully fleshed out cast to help drive you back & forth with loot. 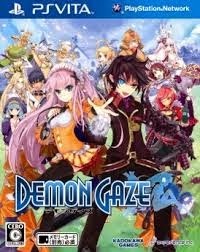 The story isn't exactly anything ground breaking or special, it's the typical, you are a chosen one, here is your tasks hop to it good sir. The difference is there is a little more depth into it than titles like Wizardry & Etrian Odyssey, rather than leaving you to your own devices the main story arc is often chugging alongside reminding you exactly what purpose you have!.
The cast of this game seem to be the stars of the show in regards to setting this game apart from it's peers, it's a mismatch cast of several fantasy anime stereotypes and if i'm honest for the most part it works!. You have the rough mysterious master, over zealous shop owners, eager to please maid & dumb-witted mercs looking out for an easy pay day. I haven't gone fully into the entire cast because half the fun is learning all the little quirks about each one and seeing just how well they were written.

My only issue with the writing is occasionally it has a tendency to just wander off into it's own little world and seem a little forced. What i mean by this is after you become familiar with the games residents they seem to drop inhibitions & you walk in & experience all sorts of "fan service" situations & naughty shenanigans. I need to point out I am not a fan of fan service but I have enjoyed several anime & games which have used it, i didn't expect this level coming into Demon Gaze & it caught me off guard with several awkward scenes.

When you first start the game you are thrown into an "Avatar" creation system when there are over 100+ Character Arts for you to choose for your Demon Gazer. This could of been brilliant had they not put a restriction on the gender for your avatar. What I mean by this is that you can infact be for example a female reptilian like creature but throughout the game you will always be referred to as a human male. Though not game breaking it kills immersion for those inclined to go outside of the guidelines. 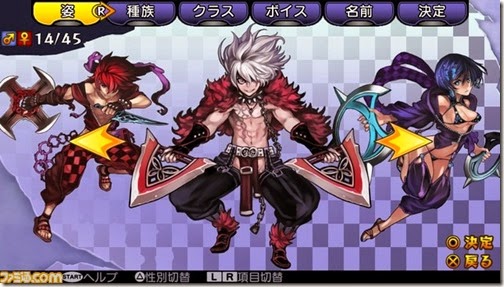 The art work for the characters is top notch for the most part, the usual mainstays of anime are there & the more fantasy like art work is also catered for. Some character designs are reused later on with a little palette swap which may annoy some but the work on some of them is that good you shouldn't really mind. It's very close to the quality that Vanilla Wear put on so think around that level and you can see what you'll be working with.

Graphics in the dungeon are fairly decent, 3D environments with a 2D backdrop. It's the usual for this genre and the dungeons are never truly stellar to look at but as long as you are aware of where you are & what the theme is you are golden. We have places like the City under siege, graveyard, Forest & other general dungeon like places. Nothing really groundbreaking but all perfectly acceptable.

The gameplay is your bog standard Dungeon Crawler, you tackle a dungeon in the first person perspective usually trying to accomplish various quests. Most of these are given to you at the bar in the form of side quests and can vary from the typical fetch quest to kill X amount of monsters. The overall main quest of the game is to tame the games main Demons, this is done by closing off "Circles" using gems until you can pin the demon down & take it on face to face.
Once you have taken a Demon down it'll join you in your quest to rid the world of this greater Demons, these can then be used in battle as an additional member to your Demon Slayer squad. You don't have direct control over these Demons and they must be used in moderation, if you use them too much the meter runs down and when it empties your Demon goes feral & is more than capable of giving you a bad day with a stray spell. 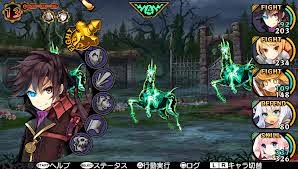 On top of all that the inn you are staying at requires you to pay rent after everytime you leave the premises, this goes up as you level up & have more members in your team. To get more members you have to rent more rooms which is quite a pricey thing to do!, It's a bigger focus on money management as the enemies don't tend to drop too much so it's down to you to make the tough decisions & make sure you come back with enough loot to cover the bills!.
This is where the circles come into play, once you have captured a circle you can then use various "Gems" on them which cause different loot drops. The idea is not only to equip your team but bring home some of it to sell to keep a roof over your head and the inn keeper happy.

Overall Demon Gaze is a curious little title, fundamentally it's a solid little title. It doesn't really do anything considerably wrong and it ticks all the boxes for it's genre. The issue with it is the claim that it's the next step in dungeon crawlers, it doesn't really do too much different rather than a few stray elements. The inclusion of a bigger story is nice but it's not really anything to write home about, the characters all have a certain charm but for me personally the "fan service" derailed that for me quite quickly.
The Demon aspect is a fair inclusion but i do feel it maybe could of been fleshed out a little more, there are just too many misses in terms of these including the amount of demons than can join you.

For such a "Game Changer" it doesn't really change that much, the story & characters could of been a little more polished and unfortunately falls flat in regards to it's biggest competitor (Etrian Odyssey)  also choosing to try the story route with it's new title. If you only have a Vita then you'll be hard pressed to find a finer example of Dungeon Crawling goodness, if you have access to a DS or 3DS though there are stronger titles out there. It's not going to convert too many to this genre and it may seem a little lacking for the more die hard players out there. 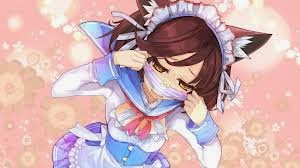 
Posted by Andi at 23:03
Email ThisBlogThis!Share to TwitterShare to FacebookShare to Pinterest