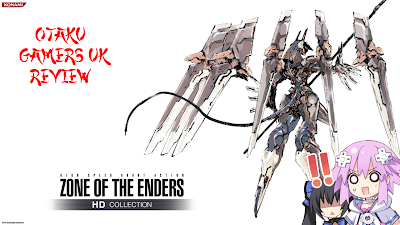 After hearing of a patch to fix this HD collections problems was released back in August (And finding it for a measly £7) I decided to bite the bullet and finally give the HD collection a try. Ive cleared both games previously on Ps2, but the stories of a botched remaster, especially with how ZOE 2 was butchered, kept me away. SO has it improved?
For those just seeking clarification on the v2.0 patch though, if you skip to the third paragraph that details graphics & sound you'll find what you seek. Lets begin the review for those still here. Throughout the Zone of the Enders series, The story usually focuses on 2 specific Orbital Frames; 'Jehuty' and 'Anubis', created as part of the Aumaan project as 'keys'. In the original game, BAHRAM forces attacks Jupiter's colony Antilia to secure the two Frames killing several civilians in the process. One of the few survivors, Leo Stenbuck, finds Jehuty and uses it to stop the BAHRAM soldiers. The sequel Zone of the Enders: The 2nd Runner is set 2 years after the original and follows a former BAHRAM named Dingo Egret who finds the hidden Jehuty on Callisto. Dingo is found by his former group whose leader Nohman requests that he rejoins them. Dingo's refusal to go back to BAHRAM results in Nohman shooting him. Interestingly, Nohman's underling Ken saves Dingo's by connecting his body to Jehuty and requests his help to defeat Nohman. To be honest, I really enjoy the story & world created for this series. For me its some of Kojima's best work. While both games feature the MGS style dialougue sequences, each portrays its story in a different way. The original game goes for CGI cinematics (which don't look to be remastered at all for this release) to tell its story while its sequel instead chooses to use anime sequences for cinematics. ZOE 2 tends to feature more cinematics and has a more fleshed out story than the original though and builds upon the themes present in the original release too. Which story you'd prefer is purely subjective. ZOE has a more slower paced, personal story while ZOE 2 is epic, full of twists & turns to keep you engrossed. The structure for each game is also different. ZOE has a more 'open' structure, offering a central hub that you can glide in before entering a level. ZOE 2 on the other hand doesn't have this. Instead it has a level structure which makes it seem linear as a consequence. The only consequence of the 'open' structure of the original is that it doesn't always notify you of where your next objective is, which means on your first playthrough you'll be revisiting areas in the hope it triggers the next event. Not a deal breaker by any means though. Its the story modes for the games itself that present probably their biggest issue - Length. Both games can be completed in about 4 hours each for those returning. Granted, if you immerse yourself in the story it will take longer than that as dialogue & cinematics add much story to the game. For some though, it could be an issue. For a first time playthrough for a newcomer your probably looking at about 12 hours altogether (as long as your not on easy) which isn't too bad by today's standards (eg a Call of Duty can be done in 5/6 hours on its first run) Its only when you have already done a run of the game and know how to tackle situations that the length starts to drop. There is much replay value for each game though as you will unlock more characters for the Versus mode. Versus is a 1 or 2 player arena battle against each other, or an AI, using whichever mechs you have unlocked. Unlocking these is done by completing the single player story modes. The ZOE 2 release here is also the European release so it features all the extra content that we had on our shores previously (extra Jehuty models to play as etc) While the games length will become shorter the more playthroughs you do, the additional content and setting/story for each game will keep you coming back for more (Zone of the Enders: The 2nd Runner also includes an unlockable 3D remake of the original Gradius arcade video game called Zoradius) I found ZOE 2 in particular to be incredibly engrossing with its story. Like the original, it builds to an epic conclusion but here it maintains a good pace on the story at all times too. The gameplay is also of a very high standard. 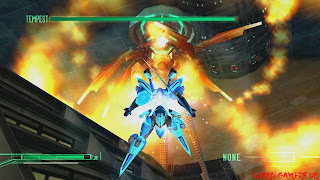 Both games feature the same gameplay mechanics. Gameplay is essentially of the Hack & Slash variety. In battle, you lock-on to a single enemy Frame and engage in combat. You are able to perform advanced manoeuvres such as grabbing and throwing enemies, which increases damage to the enemy when thrown into walls etc. When it comes to defence, deploying an energy shield or using booster jets to move quickly and dodge attacks become the norm. Using both of these is key in battle as your always facing more than a single enemy.Your main weapons are an energy sword an energy projectile weapon of sorts that allows you to lock onto multiple targets to unleash 'missiles' . There are also various sub-weapons to unlock through the game. These tend to be found on the original game (usually you have to find a 'key' to unlock its container) whereas the 2nd game usually gives them upon defeating boss characters or some helpful allies will give it to you. As you progress through the game and everytime you destroy an enemy you gains experience. Once you've managed to get a certain amount, Jehuty will level up which boosts your unseen stats. The games do try to mix things up on the odd occasion. In some stages, there is also the objective of minimising damage to nearby buildings and civilians. This has you fighting in a more strategic manner as not only do the enemies destroy buildings, but your attacks do too so you have to be careful in those areas. Your not forced to protect the civilians in order to progress in the game though but it does help towards your final score. Health & energy are replenished by collecting Metatron, a substance of energy constantly referred to during the story for its importance. Both titles play out exactly like this. The mechanics are pretty much the same across the board aside from the obvious refinements in the sequel, which is to be expected. ZOE 2 is a faster paced & more fluid game compared to the original but that's not necessarily a bad thing towards ZOE. It's still a fast paced paced game compared to its peers. There is one area the original seems to best its sequel, Boss fights. While the 2nd clearly has more in the form of eye-candy on show, the original game seemed to have more epic bosses. A boss in ZOE tended to be a Frame much different to your own. The first boss for example was as big as a a skyscraper! In ZOE 2 it tended to be like-for-like with regards to the boss characters & Jehutey. Instead the 2nd Runner tends to offer set pieces ie attacking a moving train as it passes through a tunnel or laying siege to enemy ships. A bit of a missed opportunity to go even more epic with boss character designs, but in no way does it effect your enjoyment of the gameplay. Whichever title you choose to start with, you'll be more than satisfied with your choice as the gameplay on both titles is superb, with the sequel nudging ahead due to its more fluid combat & faster pace 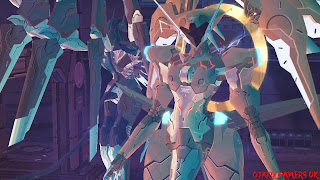 In this section I'm going to be focusing on what the v2.0 patch brings to the table. Unfortunately for the original ZOE, the patch doesn't touch that title at all. To be honest though there isn't much wrong with the port. Graphics are relatively smooth and the art style of the game still looks fantastic at 1280x720. The main issue is with the framerate. For the most part its a solid 60FPS but on occasion, usually when theres a lot of alpha effects (fire seems to be the main culprit) a drop is noticeable. And I mean noticeable. Its not something that happens too much though thankfully so the game is still very playable. Its ZOE 2 where the v2.0 patch is entirely focused. The horror stories pre-patch painted a picture of a game that, even though it was running at 1280x720, looked WORSE than the original Ps2 release. The patch fixes that. By delegating the Emotion Engines Vector unit tasks on Ps2 to the Ps3's Cell SPU's, HexaDrive (the studio tasked with producing the patch) was able to remove a sizable amount of workload off the GPU enabling a raft of improvements. Most notably, The game runs almost constantly at 60FPS now, with V-Sync engaged at all times. Resolution is bumped up to 1280x1080 too with FXAA Anti-Aliasing thrown in for good measure. Full resolution alpha effects, Depth of field (with Bokeh) and motion blur all have been returned to bring the remaster in line with the original release. How much the patch improves the port of ZOE 2 cannot be understated. To be honest, it now looks like the game belongs on Ps3. The games style ensures it hasn't aged at all while the effects work, which are a staple of the Ps2's immense particle pushing prowess back in the day, still look phenomenal. While the sequel will no doubt amaze with its visuals, the original still benefits from the upgrade too but it obviously doesn't pack the same visual treat as The 2nd Runner. In the original reviews, voice acting was always mentioned as a weak point. While I don't necessarily share that same opinion, although I will admit that portraying Leo as a whiny kid in the original seemed odd, its something to mention as a possible issue for less tolerant folks. BGM is perfectly suited to the game too, Kojima's techno-pop choice fitting perfectly with the games theme. 5.1 audio has now been thrown in for those looking for a solid surround sound experience. All in All, A worthy series to remaster that thankfully was given the respect it deserves with the release of the v2.0 patch. 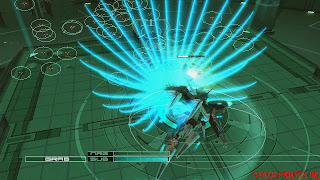 Conclusion
With each game being a classic in there own way, having them bundled together in the same package is a joy to behold. While the length of the titles are questionable & may raise some concern, It shouldn't deter most people away from what is a superbly engrossing series that will reward re-playability. Kojima produces some of his best work here that still continues to impress, even today, in that this HD Collection doesn't seem at all out of place when compared to its modern peers.

Footnote: As you've probably guessed Im more fond of 2, but I have spoken to people who prefer the original so its purely subjective which is best which is why Ive looked at this review more as a complete package. If you intend to play the game without a patch, or are looking at the Xbox360 version (the patch was Ps3 exclusive), take a point off the score for the issues that will be apparent on ZOE 2 otherwise.
Posted by Unknown at 16:34
Email ThisBlogThis!Share to TwitterShare to FacebookShare to Pinterest