No blog post over the weekend. I know, I should have done one yesterday but there was some other things that I had to contend with so I didn't get around to it. Today though I'm going to be doing something a little different. For the past few days Ive been downloading all manner of games from Google Play that are Japanese and have been released on our store in the UK. Why? Simple. I wanted to see what games are played by our eastern comrades on their mobiles. The unfortunate aspect is that most feature no translation. I'm not fluent enough in Japanese to be able to play a non-localised Jrpg or novel-based game so Ive had to play games that seem easy to pick up or have some translation. I use an Android phone myself, but I'm guessing most of these may be available on the iStore for you iPhone users out there. In truth Ive no idea really as I'm not an Apple guy myself, sorry. I think Andi uses an iPhone though so he should be able to check if Japanese apps/games are available. Anyway lets crack on with a few Otaku mobile games!

アニぱん！～アニメでぱんチラ！(Anipan: Panties in the anime) [Free]
Go on and have a guess what this games about. Go on. Don't be ashamed to say it. Yeah? Fine I'll let everyone know then. As you've probably guessed, this game involves swiping upwards on your screen to lift the girls skirt to get a peek at her panties. I'm not kidding. That's the entirety of the game. You get 30 seconds to try and get a peek when shes in her 4 different poses and there's also a few different types (Shimapan!) to mix things up each try. Getting a peek in each of the 4 poses apparently unlocks some extra stuff too. I say apparently as I gave the game half a dozen tries and only succeeding in getting a peek a few times. I'm not sure if its dodgy responsiveness or if theres a certain way of doing it, but it seems oddly difficult for such a simple game. Is it worth trying yourself? Probably not. Unless your the kind of Otaku that loves fan-service, this will bore you after a few tries as theres really not much to it.

Moe Can change! -Myroid 4 Life- (Android / iPhone) [Free]
OK I'm just gonna come out n say it. I love this game. It reminds me of those Tamagotchi's that we used to have as kids so I got a little nostalgic as soon as I fired this game up. Basically your given an android, that just so happens to be a Moe styled girl, that you have to care for and mould as you see fit. Having her complete some activities changes her stats, which in turn changes how your droid reacts to you in certain situations and having her work earns you money. During these your droid can be distracted by other players (this is an online game) but a quick waggle of the finger gets her refocused! This does boost her motivation but if you don't notice it then it does have a negative effect on her motivation, netting you less bonus's. There are other ways of boosting motivation too with items or by interacting with your droid eg stroking her hair while she sleeps. Each activity you do gets you XP points. Levelling up unlocks new ways to customise your droid and opens up new things to do. There's quite a bit to this game and its surprising that its free.Worth playing? definitely. Ive been playing now for 3 days and I doubt I'm going to stop playing anytime soon. Its nostalgic cyber-pet styled gameplay coupled with its anime styling makes it a must try for Otaku's. The game has also been fully translated into english! There's also an anime based upon this game which Ill have to look in to I reckon but I wouldn't be surprised if its a bit pish... 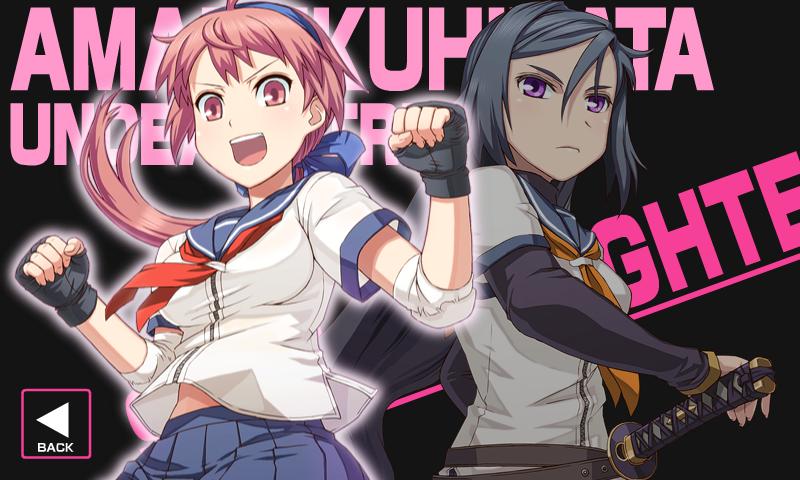 Ama-Hina (Android / iPhone) [£1.82/$1.99]
This one ain't too bad either. Its a side-scroller that see's you kicking zombie ass. The controls are so simple its immediately easy to pick up & play. One half of the screen is for attacking, the other half is for jumping and a swipe across the screen activates your special move. Movement is automatic. Your only focus is on beating down zombies and jumping over obstacles with the occasional boss to defeat. New levels are unlocked once you hit a certain distance in each level so ensuring you survive as long as possible is key. For £1.82 its not too bad. Theres a few levels to unlock & a second character that wields a sword instead of punching their way through the zombies. Surprisingly the game also has online leaderboards, but Ive never really been bothered by them much. Is it worth the money? I dunno. Its enjoyable, in a High School of the Dead kinda way, but with there being a bug at the moment making the 3rd character unusable it makes sense to wait it out if your interested for the release of a patch to fix it. A decent old-school styled game nonetheless with some nice sprite based visuals.

Dentaku Girl (Android / iPhone) [Free]
Not a game, but a calculator. It features a full voice bank, so its a great little tool for learning the numerical aspect of the Japanese language. Your also able to customise the character and background for the calculator. Like I said though its not a game so there isn't much to say. With me learning Japanese Ive found it to be a useful tool for learning the numbers which is why Its received a mention. Plus its a hell of a lot better than the vanilla calculator we get stuck with and its Free.

While there's more games I'm trying at the moment, I'm gonna leave the post at these few for now and would recommend that you at least try Moe Can Change! While most of the games end up being free, its time consuming sifting through the crap. There's far worse games than Anipan, trust me. They just wouldn't be Japanese games without quirky ones. How about paying £1.99 for a game that is literally just you spanking your maid? Im not jesting. Interestingly there is a developer/publisher called Kecmo that seems to have a lot of Jrpg's listed on the app store with some of them even being free, complete with english text. I may have a look into these for a later post in case you guys are interested. Mobile gaming in Japan is pretty big these days so I guess I'll cover the occasional mobile game that makes its way onto our shores. Ill try and keep it to games on both Android & iPhone to ensure maximum compatibility (I know theres also Windows, but...yeah..) and keep it to Jrpg's & Niche (wouldn't they all be lol) titles on our app stores. Andi also mentioned to me earlier that its pretty much now been confirmed that Yakuza 5 will NOT be getting localised due to the Yakuza team not being large enough and they are currently hard at work on Ishin. erm, outsource it then, maybe? SEGA? Hello!? aah. Not interested.
Nagoshi has recently stated that he's interested in bringing Ishin to other territories if the Yakuza team have the money & resources to do so. A glimmer of hope for Ps4 then? Hell no! No doubt if its down to SEGA they ain't gonna want to bother with localising that if we aren't even going to be getting Yakuza 5. I could rant about this, but instead I'm gonna have a minutes silence because my lifelong love for SEGA is dyeing fast...
......
......
......
......
Posted by Unknown at 16:50
Email ThisBlogThis!Share to TwitterShare to FacebookShare to Pinterest