With Rune Factory 4 being released today in the US I was considering writing a piece on it. Then I seen the EU release date being Spring 2014 and I thought Id leave it. I dunno about anyone else but that's quite a long gap, At most it could be 6 months! 6 Months! I guess there'll be a lot of information on the game floating around so a preview would be easy to write up and I could do one at a later date. To be honest I don't blame the publishers here, the blame falls squarely at Nintendo's feet for shafting their userbase and region locking the 3DS. With us being based in the UK, we have to share the pain of our EU readers and suck it & wait. At least on the PlayStation side of things we are able to import, Its just a shame about the 3DS. So whats today? Its another retrospective. I know you guys are probably getting fed up with these and want some info on new releases but I'm currently compiling a list of games to research so hopefully all next week should be upcoming releases of interesting games. Today's game is going to be the hugely ignored sequel to one of Sega's Dreamcast gems - Jet Set Radio Future

Story (Wikipedia)
In futuristic Tokyo, a group of teenage skaters (Groups collectively referred to as Rudies) called the GG's vie for control of the many districts of Tokyo against many rival groups. A mega corporate enterprise (the Rokkaku Group) has taken over the many districts of the city and their leader is now the mayor of Tokyo. It is oppressing the people, taking away freedom of speech and expression, and is forcing other gang members to give up their territory using the corrupt police force of Tokyo.


The game begins with the player in control of a character called Yoyo, who has to complete a set of basic training exercise to prove himself worthy of joining the GG's After these challenges are completed, the game is interrupted by a pirate radio broadcast by 'DJ Professor K' who fills the player in on the turmoil within Tokyo. After this cutscene, the player is released into Tokyo itself, where they pursue their mission to 'bury Tokyo in graffiti' and fight the authoritarian Rokkaku Group, and their own police force, the Rokkaku Police.

Wait! Why are you doing this one!? Why not the original!?? Simple really. This is possibly one of the most ignored games of all time. It sold less than JSR on Dreamcast no doubt. There's probably a high chance that YOU haven't played it either. Nobody ever mentions Future, not even JSR fans (which some didn't even play this sequel..pffft..call yourselves fans) So stop whining and read on as this is most definitely worth playing..

Gameplay is nigh on identical to the original. You play as the GG's tasked with taking on rival skating gangs and ridding their graffiti tags from your turf. Your able to skate & Boost still using graffiti cans, grind along rails/wires etc, wallride and perform a few tricks. All this comes together to form a kind of 'platforming' aspect to the gameplay as you have to work out possible routes to get to troublesome hidden graffiti's. Once all tags are done you end up with a boss type situation and occasionally you'll be cordoned off in an area by the police, tagging the lieutenant who's out to get you to escape. Sounds similar to the original? That's because it is. IT differs though in a few areas. With it being on more powerful hardware it has allowed for Smilebit to create larger, more open areas for you to skate in, with the levels also now being interconnected to each other. this leads to the omission of the time limit, which is understandable as the game has a more 'open world' feel to it due to its new level structure and multiple objectives within each section. Future also seems to be played a slightly more pacier speed than the original. There are more objects that are usable for grinding which keeps you zipping through the levels at a fast pace. You'll get so used to grinding among the rooftops scoping tags that it'll feel like you've failed the whole game when your skates touch the ground again due to a mis-timed jump. Each area has hidden items to collect, including Graffiti Souls, which unlock new graffiti designs, and Hidden Tapes which unlock additional missions where more Graffiti Souls can be earned. The game also features multiplayer! including 4-player split screen modes and the option to design one's own tags for using within the game. All of this adds to a game that, while it does feel like its predecessor, plays somewhat differently. 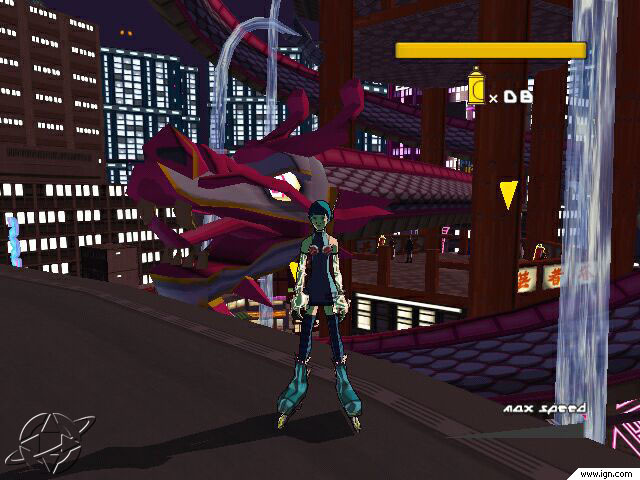 Graphically its one of those games that never seems to age. While cel-shading was all the rage after the release of JSR, JSRF ensured that Smilebit stayed ahead of the pack for a good while. JSRF is still one of the best implementations of the tech in the industry. The game oozes style from every facet of its design. While it does look similar to the original, the added power of the Xbox led to some noticeable improvements. Even with its style, JSRF still managed to pack in more detailed textures and long draw distances to go with the larger play areas. Character models didn't seem to be modelled much better but there definitely was a more refined implementation of their shading technique in play to give the game that extra sheen. And how could I forget that Boost effect! It was surreal at the time. The soundtrack, like with the original, completes the experience with some unforgettable tracks like Cibo Matto's Birthday Cake & Guitar Vader's I Love Love You. To be honest it came across as being a more varied OST on JSRF, probably due to the added space afforded by DVD-Rom allowing them to implement a larger soundtrack. Altogether its still one of the most stylish games you'll find on ANY piece of gaming equipment  and probably has the best soundtrack in all of gaming still!

Sequel!? - In the end of Jet Set Radio Future, there is a short cutscene that gives a hint to the player that there may be a sequel coming soon. The "hint" is that DJ Professor K says "There's trouble on the streets again?, Who's gonna rise to the call, huh?, Remember, the streets don't wait for no one!"  With how the game ended you'd think so? Its been over 10 years and with Smilebit now a part of Sega Sports Japan, stuck making Mario&Sonic Olympic games for the past several years, its probably never going to come.

I'm gonna push the boat out a little here. I probably prefer JSRF to the original. Whoa! Whoa! Hold off on the guillotine for a moment guys! Let me explain. Please!? My main gripe with the original was its camera system due to the Dreamcast controllers singular analogue, which seemed to faff around at the most annoying of moments. With JSRF being on a console with a 2 analogue controller, it was fixed! Plus I came to prefer the lack of a time limit as it allowed me the extra time to appreciate the developers work. Its quite an immersive game. In no way am I saying anything bad about the original so you can wind your neck in now! Should we get another Jet Set Radio? I would love another Jet Set Radio but its been way too long and I doubt SEGA would be interested. Plus if they did it would probably be a mobile game. So pull out your original Xbox and dust off your copy of JSRF! Shame on you if you don't have it or haven't played it as its possibly the last outing in this stylish series we'll see.
Posted by Unknown at 15:51
Email ThisBlogThis!Share to TwitterShare to FacebookShare to Pinterest