I was considering not doing a post after spending most of the night awake with a fever so I feel like death today. Still, with such awesome news last night, provided by Remy Dalmulder (Should give the guy a job keep digging up juicy tidbits like this), of Project Diva F making its way to the west on Vita I can't help but do a post today. Any opportunity to talk about Hatsune Miku & Kagamine Rin should be pounced on!! Is it just me or does the Vita's niche announcements just keep coming lately? Hyperdimension Neptunia PP had me cartwheeling around the office, so this is golden for the Vita. Anyway, lets have a look at this on Vita.. 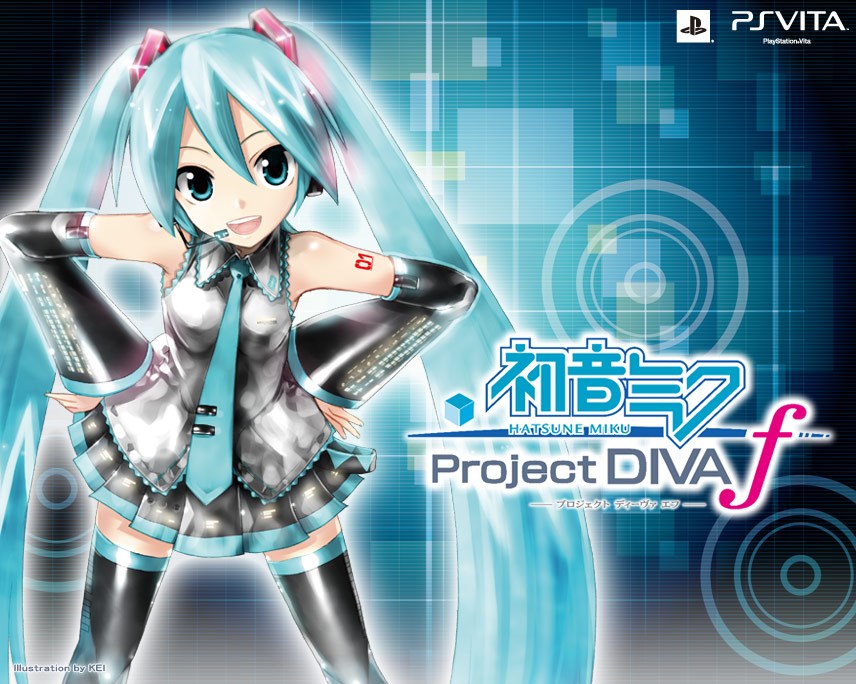 The game retains many of the staples of its gameplay from the previous PsP iterations. Anyone coming from those releases will feel right at home. For everyone else, You'll be dropping into a superbly refined rhythm game that's easy to pick up but devilish when the difficulty its ramped up. Basically, as with all rhythm games, the face buttons are pressed in time with the music to yield points. On Easy only the Circle button is used (also the analogue, more on that later) which is a perfect starting point for anyone new to the game. Up the difficulty and this is where Project Diva really comes into its own. On Normal not only is another face button added but another symbol is then used in-game, an arrow coloured the same way as the face button. With this you have to press the face button and the corresponding D-pad direction - ie Square+Left for an arrow the same colour as the square button facing left. The jump up to Normal takes a little getting used to, especially if you have just finished Easy, but the Jump to Hard isn't too bad once you've cleared Normal. Its the same but just uses all the buttons (except LI,R1,L2,R2) I have yet to try Extreme but if the PsP versions are any indication, Ill be sobbing in the corner after 30 seconds. With this being a new release there are a few changes to the old formula. The most notable is the 'Star' symbol which requires a flick of the analogue although these tend to usually only show during the new 'Technical Zone' portion of a song. The Technical Zone is another new addition whereby you have to maintain an uninterrupted combo within a time limit for bonus points. Another change comes with the 'Chance Time'. While bonus points are still awarded during this segment like in previous releases, A star in the corner will also fill up ( 'Cool' will fill the star quicker than 'good') which when filled will enable a singular rainbow star to appear at a later interval in the song. Hit this Star and not only will you get a nice boost to your points but also a bonus event will happen during the song. - Anyone who's been following my stuff will notice this segment as being from my Ps3 Project Diva F review.  That's because the game plays practically identical aside from obvious differences in regards to touchscreen controls instead of analog (although the analog control was a minor gripe in my review so that's an improvement!)

There is one minor concern so far with regards to content. Will it feature the full set of 44 songs (including DLC) from the console version or will it be cut back to its eastern brethren? No one knows at the moment but with the game being 5+GB on Ps3 and Vita cartridges only holding up to 4GB, somethings gonna have to give. With the game not having to push 1080p on a handheld with a 960x544 screen, hopefully the obvious reduction in asset file sizes from dealing with a lower resolution will yield the space for those extra songs. Its not a deal breaker for me by any means. Graphically it should hold up to its big brother fairly well. From what Ive seen in screenshots it looks to be the same, just a tad less detail and a bit more aliasing. Everything else appears to have made it, so hopefully it'll have all the content of the Ps3 version chucked in too to make it a tasty deal.

One gripe though. Its digital only in both the EU & the US. I was hoping for physical for those AR cards, but if they keep that in and allow the printing of the cards I guess Ill be happy enough. No release date penned by SEGA either, Just an 'early 2014' statement. The main concern I had with the Ps3 version was that Id always played via PsP before so playing on a console seemed a bit jarring. Ill be double-dipping for this but I'm not sure about doing a review for what is the same game. The main gripes (inaccurate analog & non-handheld version) are both being rectified, so does that mean the Vita version would be a 10/10!? Maybe. It is a perfect handheld game after all, but the Ps3 review would still stand for the Vita version too so I doubt I'm going to review twice. You'll have to decide for yourself whether it gets that extra point or not on the Vita. If your interested, here's the Project Diva F Ps3 review
Posted by Unknown at 14:30
Email ThisBlogThis!Share to TwitterShare to FacebookShare to Pinterest