Recently I spoke with Ryu Ga Gotoku fan ThePatrick known for his legendary Kenzan translation guide, it seemed that this went down well so I approached KHH Subs for an interview aswell. 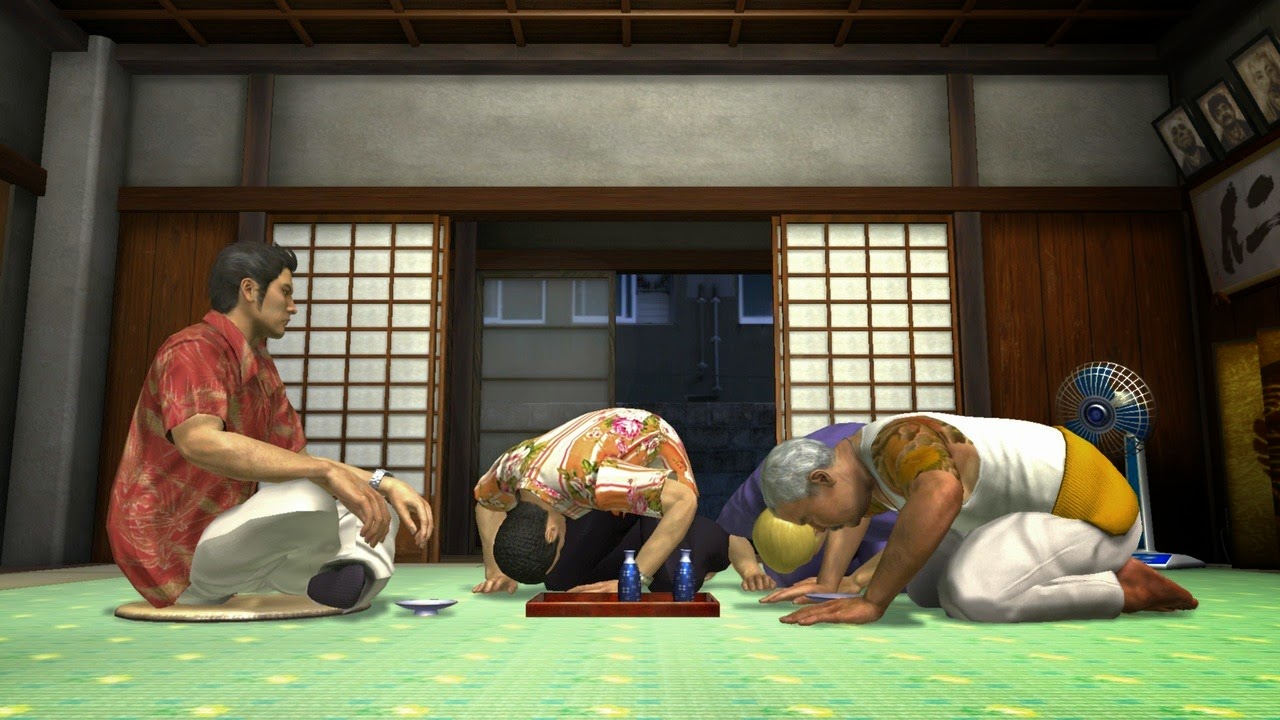 Rather than have me tell you what they are all about, here is the review that should answer any and all questions.

- Hello & welcome to this interview with KHH Subs, First off for people who aren't aware of what it is you do, could you please just give us the
low down on KHH Subs.


KHHsubs initially translated idol related things (mainly songs) when there was 3 of us, but now that it's just me (Captain Epic), KHHsubs is dedicated to Ryu ga Gotoku translations. As long as there are Ryu ga Gotoku games that don't get an English release, I will be there to translate them!


-Personally I have used the Kenzan! Cutscenes and your ISHIN guide and both have served me well. How time consuming was both of these
projects, why did you decide to do them & did you come across any issues?


Glad you're finding them useful! I can't even remember how long the Kenzan cutscenes took me, but I know the full story translation took me roughly a year to complete (Most of that time was spent video editing. I spent an insane amount of time editing all the videos - countless hours). The Ishin guide took me a few months and I put many, many hours into it. I think the effort shows in the guide though - I have a very detailed story summary and lots of maps, item pictures and such to help.
As for why - I started on the Kenzan cutscenes for a couple of reasons:


1- To help people who don't know any Japanese understand the story
2- For practice. To improve my translation skills.


I did Ishin and Ryu ga Gotoku 5 for the same reasons.


I guess the only issues I came across in Kenzan was trying to convey certain things in English. If possible, I wanted to convey things in a way that didn't require any added info, but there were many occasions when I had to just put notes in the video description to explain terms. For Ishin, I didn't really have any issues. Since it's all text based I could explain all I wanted about various things, so I didn't have to worry about how to convey things in English so much.


-Recently it's been announced you are helping work on a translation for Kurhiyo, How did this come about?


Someone who goes by the username "Aegehn" contacted me a week ago. He's a computer science engineer and a fan of the RGG games and he wanted to hack Kurohyou to make a fan translation patch, so he asked me to work on the translation because of all my work with RGG (Kenzan, Ishin, 5). I've always wanted to do the Kurohyou games, but I ended up always putting it aside to do the other games. Since I don't have to worry about video editing (just translation), I can afford to put time into working on this Kurohyou translation and it won't have any impact on my work on RGG5.


-How will this differ to your previous projects & how much input would you say you have on this project?

The big difference is that all I have to worry about it the translation itself. I don't have to spent countless hours editing videos or anything. Well, I am also doing some graphics work as well, but it's still a lot less work than video editing. My role in this is basically a "chief translator", so the main bulk of the translation will be done by me (main story and substories, for example). Thankfully, a guy who goes by the username "FShadow" is also helping us out with this and he's doing some translations for various things such as item/food/drink names, character edit parts, etc, as well as helping out with the graphics.


-Do you have any time frame of when it's looking to be complete?


We have absolutely no idea when this will be finished. We only started working on it a week ago!


-Final question on this matter, I'v played it myself and really enjoyed it despite having no idea what was going on, is this title one you have also enjoyed yourself
and do you feel that there may be chance that the follow up will be translated to?


I do like the Kurohyou games, but I don't like them anywhere near as much as the other games in the series (probably why I kept putting it aside to focus on the other games). As for whether or not we'll translate Kurohyou 2 after doing the first one, that's all down to Aegehn - if he's happy to hack it, I'll be happy to translate it.


-With Ryu Ga Gotoku 0 being announced recently is this a title you would be interested in translating should Sega decide not to bring it over & why?.

Of course. I'm still a long way off worrying about Zero though. I need to finish up RGG5 cutscenes, then do the main story like I did with Kenzan. Due to how huge the game is, it's going to take many hours of video editing to put it all together, so I don't think I'll be finished with that until late next year. After that, I'll be doing Ishin - from the start I'll just do the full translation rather than cutscenes first. RGG5 is the last time I'll be doing that. I could get away with doing it in Kenzan, because most of the key moments of the story are told through cutscenes, but I've noticed in 5 that too much is missing. This is especially true in Shinada's section - so much of his story is told between cutscenes that I honestly don't think anyone will have any idea what's going on by watching just the cutscenes for his section. So, yeah, for Ishin I'll just do the full story from the start. After Ishin is finished, I'll look into doing Zero.

-Personally how would you rank each title in the series from best to worst?


A very difficult one to answer! I always rated Kenzan as my favourite, but I played it again recently and, to be honest, it hasn't aged well. It's probably where I'm used to Ishin's gameplay now, so going back to Kenzan felt weird. Anyway, at this present moment in time (my opinion on this keeps changing over time), this is how I'd rate the games:


1- Ryu ga Gotoku 5
While some elements of the story are a bit... "questionable"... overall, it's a fantastic game. Gameplay is great and there is so much to do! The story on the whole is great, with the exception of a few things. I couldn't help but feel Shinada was added in just for the sake of having an extra playable character and to pad out the game more. He just wasn't relevant to the main plot at all. At all! The game tries to force him into the main plot by giving him ties with Dojima (they went to the same school... seriously? that's literally his only connection), but it's just awkward. The other problem with this game is the fact it doesn't run very well - so much lag and loading.


2- Ryu ga Gotoku 3
Love this game. A lot of people complained about looking after the kids too much, but I think it adds an awesome dynamic to the story - Kiryu is constantly torn between the Yakuza world and doing what he really wants to do: running the orphanage.


3- Ryu ga Gotoku Ishin
Great story, though I don't think it's as strong overall as Kenzan's story. Loads of things to do. Gameplay is great fun and you can choose between 4 different fighting styles.


4- Ryu ga Gotoku Kenzan
I really enjoy the story and there are some cool mini-games and lots of substories.


5- Ryu ga Gotoku 2
Story is amazing, though there are some weird bits (the castle appearing out of nowhere?). Gameplay is still great, though feels a bit dated now (compared to Ryu ga Gotoku 5). Not as much to do in this game as later games though.


6- Ryu ga Gotoku 1
Has the strongest story of the whole series, in my opinion. Gameplay definitely hasn't aged well, bit it's still fun to play. Limited in terms of what you can do outside the main story, but it's the first game in the series so it's not surprising.


7- Ryu ga Gotoku 4
For some reason, I didn't enjoy the story of this very much. There was just something about it that didn't do it for me... However, the gameplay is great and there's a lot of stuff to get up to outside the main story.


8- Ryu ga Gotoku Of the End
Weakest story in the series (well, it's a zombie game so you can't expect much), but it's still decent enough. Gameplay is actually good fun, although the controls are a bit awkward. Also, the AI partners are complete idiots.


9- Kurohyou 2
This game is a huge improvement over the first game in pretty much every way.


10- Kurohyou 1
Story is pretty good. The ability to choose different fighting styles is an awesome feature!

-Finally it's been amazing to have this chance to speak to you, is there any way fans can help what you do either via input or donation?


It's been a pleasure! Always happy to talk about Ryu ga Gotoku :)


I have a paypal donation button on my site for anyone who feels like donating.

Many thanks to KHH Subs for taking the time to speak to us!, expect more coverage of the Kurohyou translation and any other news in the future.

If you want to check out what we have been talking about head on over to KHH Subs now!.
Posted by Andi at 11:25
Email ThisBlogThis!Share to TwitterShare to FacebookShare to Pinterest