Tearaway is one of those games you will have to play to understand the hype. This is the first game that really made my girlfriend giggle. For the first time she enjoyed a game as much as I did. She enjoyed it that much that she wanted to borrow my vita. Just to play Tear Away. That ladies and gentlemen means this game is enjoyable for all people. Gamer or no gamer this game is something really special. In this review i choose to be Iota , but you can also choose to be Atio ( pronounced as ah-twa).

Story
The game starts with an introduction. The one who is being introduced is YOU! You are the godly being who is looking down on a world of paper. You are the one who is holding this magnificent paper world in the palm of your hands. From the paper world you will get an invitation to tell a new story. Before I even realised a hole ripped open before me, spewing shredded strips of paper, and then I fell in the wonderful papery world of tear away.
The story starts with you and Iota. You as I mentioned before is the godly being who is looking down on a world of paper. Your task is to guide Iota through the papery world  and help him with the  dangers that are ahead. Iota is a messenger and he has a message for You. The message is inside his ( or her) envelope shaped head. This all has to be done in hope for you and Iota to be reunited and the message to be delivered to the you. 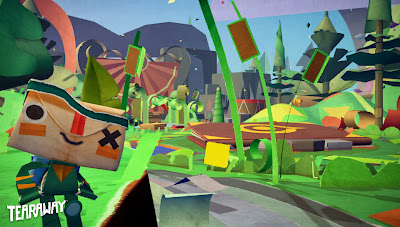 Graphics and feel
The world of Tear Away is made all out of paper. Every plant, rock or animal is constructed in a magnificent way. The environments you encounter range from grassy woodlands areas to rain-battered harbours to scrubbed laboratories and far beyond. Each is made completely with papercraft: colourful paper that is folded like only you have seen in the art of Origami. Your presence in the world is directly noticeable because the sun is your face. When I saw this I giggled because it reminded me of my childhood memories watching the Telletubies ( the creepy baby sun god). This doesn't feel weird because your world and the world of Tear Away feel so connected.

Sound
The sound design is superb. Every area in the game has a different song. Furthermore, the sound effects are something you wouldn't expect on a handheld device. This game is in the same league as Killzone Mercenary.

Gameplay
The gameplay is a simple 3D platformer. You move with the left stick and you can change the camera with the right stick and gradually you will learn new skills that can help you in your quest. These include the ability to jump, to roll and to play accordion that sucks in air and forces it out with tremendous power . Sometimes the camera feels a little bit floaty and this resulted in me dying a couple of times ( I'm also terrible at platformers but boy i love them). However, the checkpoints are forgiving so it never came to the point it felt cheap. Some people were concerned the controls had the floaty feel that is common to the Little Big Planet games. Let me tell you all, this time Media molecule did everything right. Iota is responsive in every way. If you press X Iota immediately jumps, if you push O Iota rolls himself up in a fluent animation. 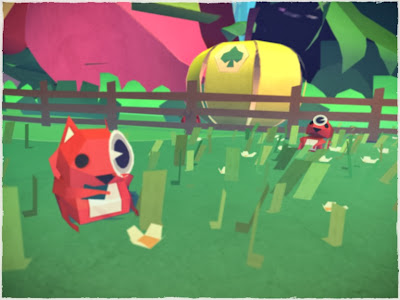 Media molecule did something special with this one. It's not just a simple 3D platformer but one that is crafted with love and creativity. Every level is full of detail. Squirrels jumping on a trampoline to elks eating paper grass to inhabitants of the world sitting at a campsite. This game feels alive and you feel like you are visiting a vibrant living world. The moment the you interact with this world is the moment this game turns from great to a system seller. With the back touch something magical happens, your finger appears in the world of Iota. With your finger you can help Iota to defeat his enemies and clear the obstacles that are between Iota and his goal to deliver his message to the you. The camera is used is an innovative way. At some point in the game an elk told me his skin was stolen by scraps (Nasty little things and the main enemy of this world). He ask me if i would redecorate his skin. I took a picture of a flower in my living room and at that moment the red crimson colour covered the elk. He loved it, in fact , he started at trend. Other elk in the area started wearing it, too. This camera function is used far beyond this example. Everything you take a picture of in the world of tear way can be uploaded to the Tear away website. Some objects like squirrels, elks and wendigo's can be created in the real world. You do this by going to tearaway.me. My favourite godly action was to use the front touch which is used for simple and frivolous tasks like drawing a crown on a sheet of paper so that you can cut around it and place it on a creature. This can be a squirrel king who has lost his crown thanks to the scraps or a pig who is considered ugly by his owner. At some point at the base of the mountain you're asked to make a snowflake. I felt like a child because i envisioned something that you wouldn't see every day. I giggled and drew some magnificent breasts ( Yellow ones with pink spots on them). Rendered in the game, the alpine scene looked stunning and my special snowflakes looked like something you only see in cartoons (gigidy).

This game manages, even when you imagine things that aren't appropriate, to make things look cute. Media Molecule has achieved something that should have been delivered at launch of the PlayStation Vita though. This game is a system seller in every way. What elevates this game above any other game on the vita for me is the ending. The ending was heartbreaking. When Iota delivered it's message the game has ended. The ending  was so sad because the bond you and  Iota had was something special. The story I and Iota had is something I will always remember. Everyone has a different story and that people is something special. The only negative is that this game is too short. I wished there was more Tear Away. This reaction is normal because the game has delivered in every way. 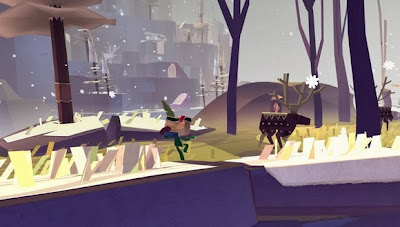 Conclusion:
Tear Away is something you will have to play to believe the hype. Tear Away is about delivering the story of Iota and the you. It achieves its ambition to be something more than a 3D platformer. The moment that you interact with the papery world of Tear Away, this game becomes a system seller. This game is worth buying a PlayStation Vita for because you cannot experience this game on any platformer.

Posted by Unknown at 14:13
Email ThisBlogThis!Share to TwitterShare to FacebookShare to Pinterest