The first review to be posted straight to blog is also, probably, the biggest game we'll look at for a while. While your no doubt wondering why Ive done a review for this, its simple. While Beyond may sell a million copies (or not) only a niche part of its audience will truly understand what's trying to be accomplished. Its fairly unique in an industry of tried & true mechanics. So how does it fare? 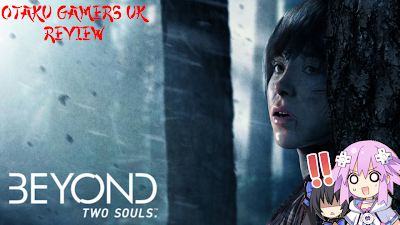 When it comes to Quantic Dreams games, you cant start with anything other than its narrative. Beyond plays out like an interactive movie so it lives or dies by how compelling its storyline can be & how well its portrayed. Ill try to discuss this aspect of the game without spoilers! So lets get the obvious stuff out of the way. Yes, Ellen Page & Willem Dafoe do actually act out their parts using state-of-the-art motion capture techniques. In truth, Ellen Page's performance as Jodie is possible the greatest aspect of the game. Its a breath of fresh air to have a lead protagonist in a game being as believable as this. Kudos to Ellen page for her stirring performance (Willem Dafoe does a great job too and Kadeem Hardison as Cole Freeman is worthy of a mention) When it comes to the story, game is told in a nonlinear narrative, skipping back and forth between three points in Jodie's life (Child/Teen/Adult) The narrative structure has been a contentious issue in other reviews, but not here. Upon starting the game Jodie talks of her fragmented memory and this is further reinforced at the end. A non-linear narrative fits the premise perfectly as you are playing through Jodie's memories to piece together her life. I guess I should call out some of the other reviewers on this as they'd understand all this if they'd played the game in its entirety. So how is the narrative? Engrossing. There is the odd occasion when it seems a little clunky, but for the most part you'll be completely immersed. There'll be moments of tears, smiles, frustration & chuckles as you go through the emotional rollercoaster of Jodie's life. While David Cage's writing & directing isn't the best here, I'm not calling for his head like other reviewers though as I enjoyed the story that was provided. The game will set you back between 10-15 hours of your time, which is better than I thought when I played through it (I expected to be done at about 8 hours) The game is also reputed to contain at least 20 endings, so depending on your choices you may end up with a different journey to you friends. With so many endings, Beyond's freedom comes from the choices you make rather than how you play the game. A 2 player co-op mode is thrown into the mix too. One will play as Jodie, while the other plays as Aiden. With the touch app, co-op can be done with a single Ds3 or you can forgo the touch app and use 2 Ds3. Move support has been omitted this time though (more on that later) Whether you like the narrative will be purely subjective. I personally loved it, but to remain objective - its not without its flaws, so be mindful! 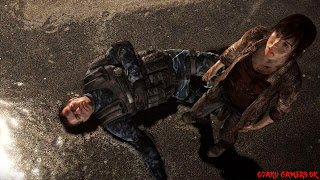 Now its gameplay is one area of the game that seems to have received the most flak from the mainstream gaming press and has pretty much divided the industry. As you may no doubt have gleaned from my opinion piece pre-launch, I do regard Beyond as a game. Albeit a basic game. Ill concede that notion. So how does it play? If your coming in from Heavy Rain you'll have a rough idea on how it pans out. Where beyond differs from its predecessor is in its streamlining of the QTE based gameplay. Buttons are shown during certain scenes that need to be pressed to have you character perform actions on screen being the only noticeable aspect that has been carried over. During the fast paced moments, prompts are replaced by a deft flick of the analog in the direction Jodie is moving on screen with the game entering a form of bullet time for a couple of seconds to allow you to judge the direction a little easier (although I still managed to get it wrong on the odd occasion -derp-) This seems more fluid to me and removes some of the clunkiness from the previous title that reared its head during similar moments. There are times when you are given some freedom and the game controls just like every other 3rd Person game, with a white dot being placed on the screen to highlight areas of interaction which are accessed by flick of the analog in that direction. When it comes to controlling Aiden, the game is probably at its most free. Although you cant go too far from Jodie, Your able to move within a full 3D space and even go through walls/floors/ceilings (although not all the time unfortunately) and some of the moments when you have to protect Jodie are extremely intense. Seen as I was doing this review for you guys, I also gave a section of the game a play through using the Beyond touch app instead of a DS3. To be honest I quite liked it. Although you lose some of the freedom of Aiden, almost everything else just works perfectly on your phone/tablet touchscreen with most actions being replaced by intuitive swipes and taps. Id recommend a try if your feeling adventurous! Move support has been omitted this time around. In a way its understandable with most of the context sensitive movements we loved with the Move being streamlined into a simpler system. You could say Move support has been replaced with the Touch app, but the lack of Move support will no doubt disappoint some. I suppose the question now is- is there enough gameplay? Yes Id say so. The streamlined system & Touch app create a more intuitive method of interaction, but I do also feel it has been streamlined a notch more than it needed to be. The interaction is still enough though to ensure your immersed in the game. The gameplay on the other hand, is purely a matter of taste. It does play different to pretty much everything else on the consoles at the moment and feels unique in that way, and even though Ive raised it as an issue somewhat in case it'd bother you, I found its simple gameplay to be superb. 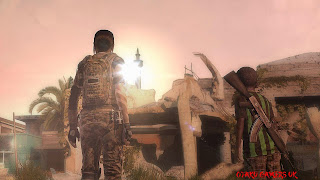 This game is a technical showpiece. At times you'll get up, open up your Ps3 and stare in disbelief at the fact a Ps4 hasn't been snuck inside the casing instead. Theres such a high level of fidelity on show, even more than Uncharted surprisingly, that you'll wonder how other linear games look so drab in comparison. Quantic dreams really have every scene dripping with detail by adding all manner of little details. Textures are crisp with a huge amount of variety and only a handful of instances where there seems to be any noticeable texture pop-in. As you'd expect the characters are superbly detailed with the motion capture animations ensuring movement and actions are as believable as you'd expect for a title like this. Lighting is a huge plus point for the game and almost gives it a next-gen sheen, David Cage himself stating some aspects of the lighting in Beyond ie Physically based shading was directly influenced by what they've been working on with Ps4. Even the SFX are superbly realised. Weather effects are stunning (rain in particular) with other aspects like depth of field and lens flares looking scarily realistic. The one aspect in all this that doesn't quite hold up is the fire effects sometimes looks a little off. Still, I can begrudge that with how incredible the rest of the game engine is. Framerate is also rock solid for the most part even with all this eye candy on show, although a few momentary judders are apparent on a handful of occasions and the resolution appears to be native due to the clarity of the image that's shows. No doubt your sat there thinking 'well its linear so its just corridors and confined areas' which is true for the most part. But the Navajo chapter in particular eschews this with featuring a fairly open area AND maintaining the high fidelity of the rest of the game. The soundtrack, like with Heavy rain, fits superbly with the content. The music kicks in just when you expect it too and resonates with each moment within the scene while high quality sound effects fill out the soundscape with atmosphere. Voice acting is also stellar, but then that is to be expected for a game of this type. Sounds perfect, any gripes!? Just one, although personally It didn't bother me but it might for some readers. The game is presented in a 21:9 aspect ratio. Yes, that means black bars similar to how a movie is. Like I said though, It didn't bother me and once I became engrossed in the game I didn't even notice them at all. Still worth mentioning just in case. 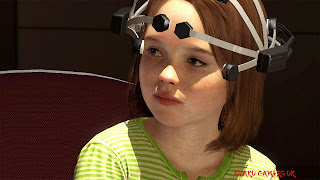 Conclusion
As a swansong for the Ps3 before the next generation starts, Its a superb technical showpiece for the Ps3 while also giving us a glimpse at what to expect from the next generation with regards to fidelity & cinematic aspects. The odd moment of clunky writing and direction slightly mar an otherwise superbly compelling narrative though, but even then it never falters. The streamlining of gameplay also comes across as a little too simplified at times, but in an industry of complexity - Beyond's simplicity could be regarded as a breath of fresh air by some. If you can live with these minor issues though, you'll find yourself immersed within an emotional rollercoaster of a journey that is one of the best, if not the best, cinematic & unique experiences you'll find in gaming.

Posted by Unknown at 15:28
Email ThisBlogThis!Share to TwitterShare to FacebookShare to Pinterest