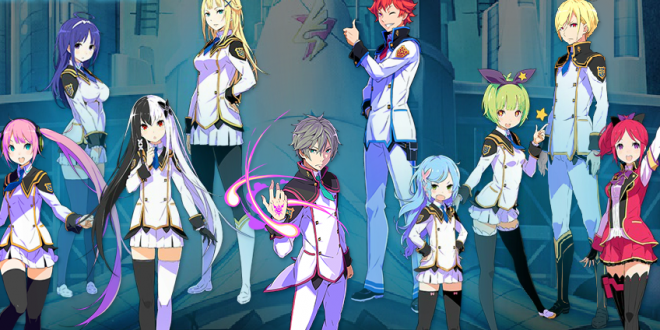 Conception 2, a game set in a world where teenagers, who have the mark of the Star God and are tasked with the job of defeating monsters that have emerged from Dusk Circle throughout the world. To achieve this, you must "classmate" and create Star Children to aid you and your chosen heroine in battle! From the outset this sounds like a silly premise for a game and believe me at times it is. Even the game itself, I believe, realises this and mocks itself. Never the less though, behind this raunchy story is a fairly satisfying dungeon crawler which has the potential to take up many hours of your life.


From the start it is very hard to understand what genre Conception is trying to achieve and this is where it starts to fall over itself. Is it a dating simulator? A RPG? Or even a Micro-Managing Simulator? It is confused and I found it tough to get involved with story and characters from the go due to this. This unfortunately does not get any better as the game progresses. For a game which has eight main characters (yourself and the choice of seven heroines), it really does not do a great job to help you connect to them. In all honesty it does the opposite - they are just plain annoying. When you find yourself in the position to choose who you take into the Dusk Circles, it feels like the game wants you to choose by personality and that is not a bad thing if the characters were interesting. Each heroine has their own personality but every response you give to their "problems" results in you trying to get into their pants! That is the one big issue I had with conception, it knows what it is about. It is, let's say, a sensitive subject to create a game about, but the game, like I have said, is self-aware. It knows what it is doing and some of the scripting feels so cheesy. It feels like the lines are probably taken straight from a terrible 80’s B movie. I am not sure if things have been lost in translation but some lines are just make you cringe. Let us move on to the main part of Conception 2, the gameplay. It is a dungeon crawler so expect to be spending many hours trawling around endless corridors of enemies. From the start, the gameplay is very clunky and has no real flow to it. This is due to you only having one team of children. You can have up to three teams of three children to aid you in your battles. Once you have the maximum amount of companions, the gameplay begins to flow more fluidly.

The battle system is an interesting one. It combines the use of enemy’s weakness, positions and elements.
Position based combat is a great feature in the heat of battle. An enemy’s weakness is based upon which angle you attack them from. Each enemy has their own position in which they are weak from. On the flip side of this, each enemy has a caution point. This is a riskier move but when you pull it off you fill your Overchain gauge, which in turn allows you to chain attacks across multiple enemies. If used right you can clear a tough battle rather quickly. 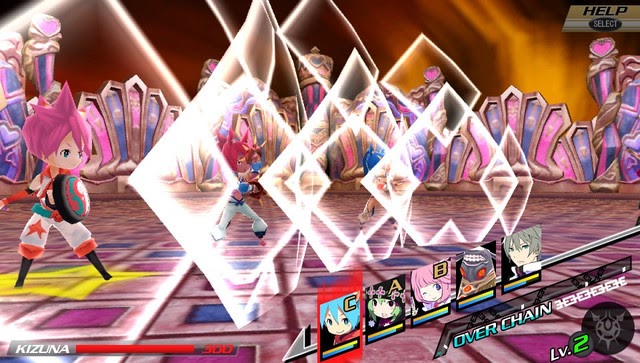 Also if you are behind an enemy and it cannot turn or move, they will miss their attack upon you. It is a lot like chess - you find yourself tactically attacking enemies not to kill them straight away but by keeping them at bay until you know you can beat them within one move.

The element system is also brilliant, if you use it correctly. There are chances where you can one shot dungeon bosses due to tactical thinking. I know in RPGs you always have to be thinking ahead but some are really a case button bashing until the enemy is dead. At first Conception 2 is like this but as you progress through, you face tougher, smarter enemies which need a bit more to defeat. Saying this though, it does have a flaw. The battle system has been thought through very well, it has a lot of potential but the gameplay itself is very boring. There is no push in the game to help you along when you are level grinding. In fact, I would say after a short it gets quite boring. I found myself going into battles and trying to get it over as quickly as possible. Meaning that I put not tactical thinking in my attacks, thus taking away the best element of the game. If the story was strong it could be forgive but it is not. It is hard to believe that such a tactical battle system can be boring but Conception 2 manages to do that. It is a shame as it could have been a solid dungeon crawler with an engaging experience but it falls short and fails to impress.

Then there is auto play. I had it stuck on because I couldn't press the button quick enough to turn it off. You can set your teams up to carry out certain tactics and let them fight it out for you. I can see this being useful when you are grinding levels but this takes the fun away from the game. I understand the need of grinding in dungeon crawlers and RPGs but this function is silly and does not help the fact that the gameplay can get boring. In all honesty it adds to it. I turned it on for a few turns to see what it did and it really does auto play your battles. All you need to do is set up your tactics and walk up to enemies. 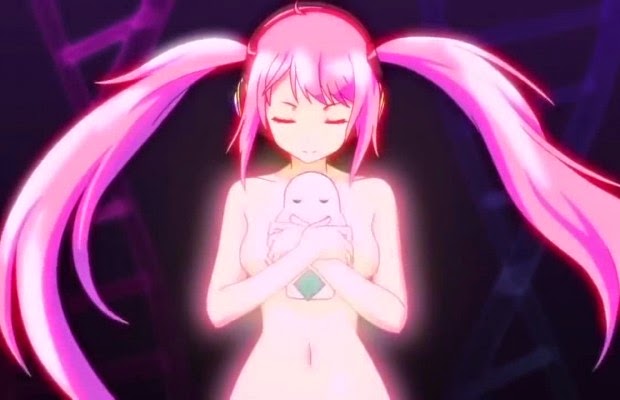 The art style of the game is beautiful and what you expect from the style of game. Cut scenes are all animated and the conversation scenes are very well presented. You even get treated to a lot of voice over scenes and not just generic responses. The menus are neatly presented, easy to use and everything makes sense. You have your dorm to sort your team out, the shop to upgrade, the lab to except quests and the training centre to carry out the all-important grinding! Then there is the Church.

Ok, on that point let's address the elephant in the room now and that is class mating. The ritual where you mate with females to create star children to help you on your quest. It is what it is and once you get over it you will find a deep creation system which allows you to create the perfect team. Depending on which heroine you choose and your current level effects what children you can create. There are thirty different children to create and like the heroines they all have weaknesses and strengths. The best thing is that if you combine the correct classes in teams they can work together to be even better! They can even combine to create a super child with an overpowered move!

Conception 2 is not a game which you can play once in a while. It requires a lot of time an effort. If you cannot dedicate this amount of effort into it, then it might be advised to give this one a miss.

Yes, Conception is a good example of fan servicing. It contains teenagers, panty shots, jiggling breast and sometime due to this, it gets caught up in its self. Buried beneath all this though is a good battle system but suffers from dull repetitive gameplay. It is flawed in a few areas but the ideas are there. If you are into hard core grinding RPGs with added fan service, then this is your cup of tea. Even if you just like the RPG element of this dating simulator, I believe you will have a good time (once you get over the initial shock factor) but if you dislike the fan service then you will find it very hard to like.

Either way, if you do play it you will have a lot of funny stories to talk to your friends about.

· Love to grind and not too bothered about repetitive gameplay? – Right up your street

· Crawling slowly though countless levels of dungeons is like a Holiday for you? Pack you towel and sun cream, you will love it!


Who Shouldn’t Play This?

· Need a solid story and deep characters? Sorry you won't find it here

· Cannot stand cheesy lines which belong in a b movie? Stay well away. It will make you cringe every step of the way

Posted by Unknown at 10:04
Email ThisBlogThis!Share to TwitterShare to FacebookShare to Pinterest