Death makes sad stories of us all.

For a younger gamer who only had access to a basic PC, point and click adventure games were a key foundation in my younger life of gaming. I have fond memories of trying to solve to most tedious of puzzles in Escape from Monkey Island but there was one title that a missed. This was Grim Fandango. I have no idea why i misses it but it has been on my to do list for some time now. Grim Fandango remastered is a perfect for clearing it off my list but does this critically acclaimed 90s title live up to this day? Well, lets go on a 4 year journey together through the land of the dead! 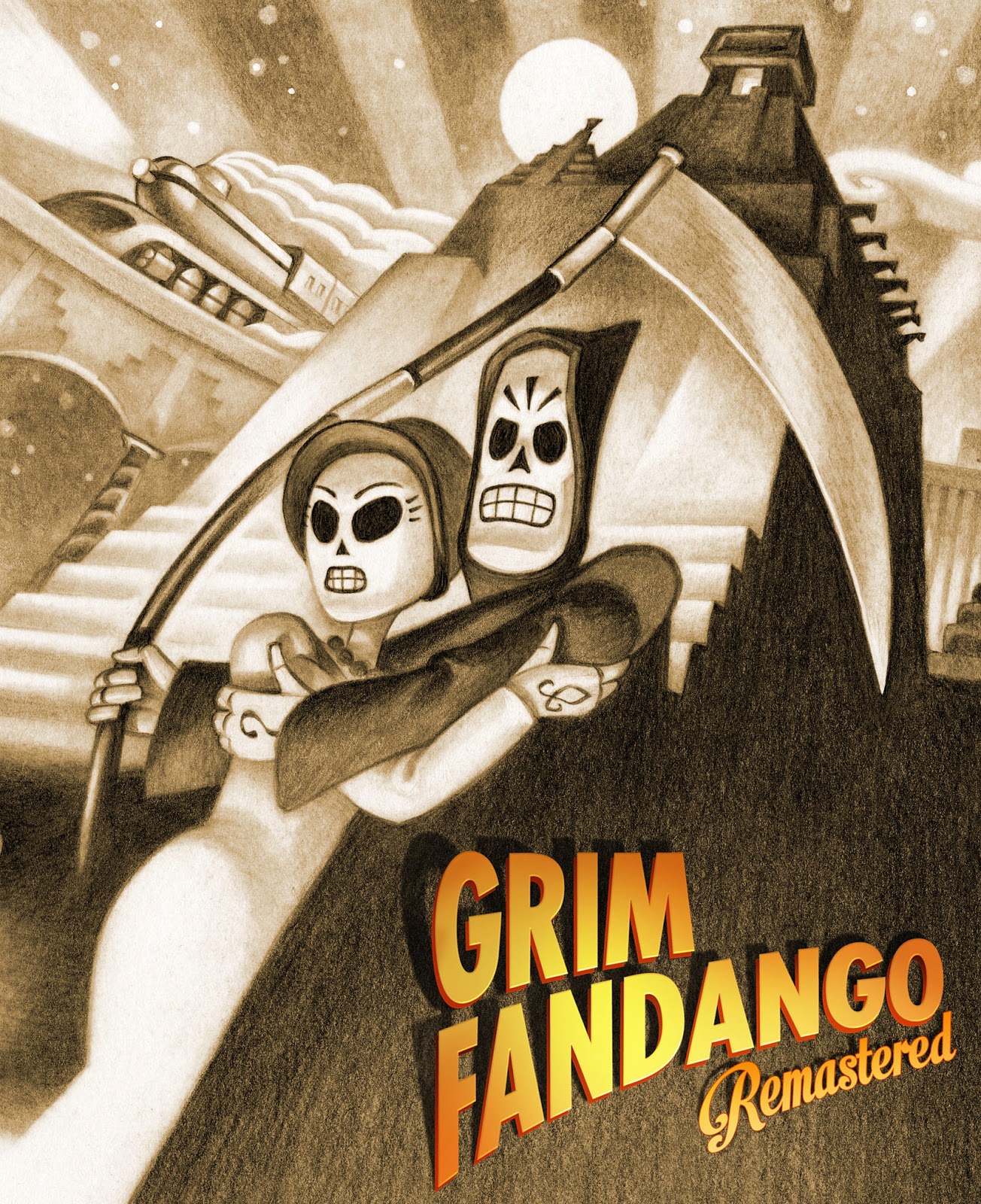 You play as Manny, who is a salesman at the DOD. He is there to guide those who have just left the Land of the Living. You see it is not a simple road to the Ninth Underworld. Oh no, it is a four year journey but do not worry though, Manny is here to sell you an easier way - how about a ticket on the Number Nine train which gets you to the end in just 4 minutes. Sounds all great but thats if you qualify of course. Think of it like an accounting office - your clients will vary from great ones to downright terrible ones. Unfortunately Manny always seems to be getting the bad ones and this is an issue. The 'dead' who work at the DOD (such as Manny) are there because they have sinned in their previous life and have to work the debt off by earning commissions from their clients. So, poor clients equal no commission and Manny is on the verge of being fired. Meaning he will be stuck in this limbo for eternity! But after securing what seemed to be a perfect client he finds out that the management at the DOD is not what it seems. This is where you begin your true quest. 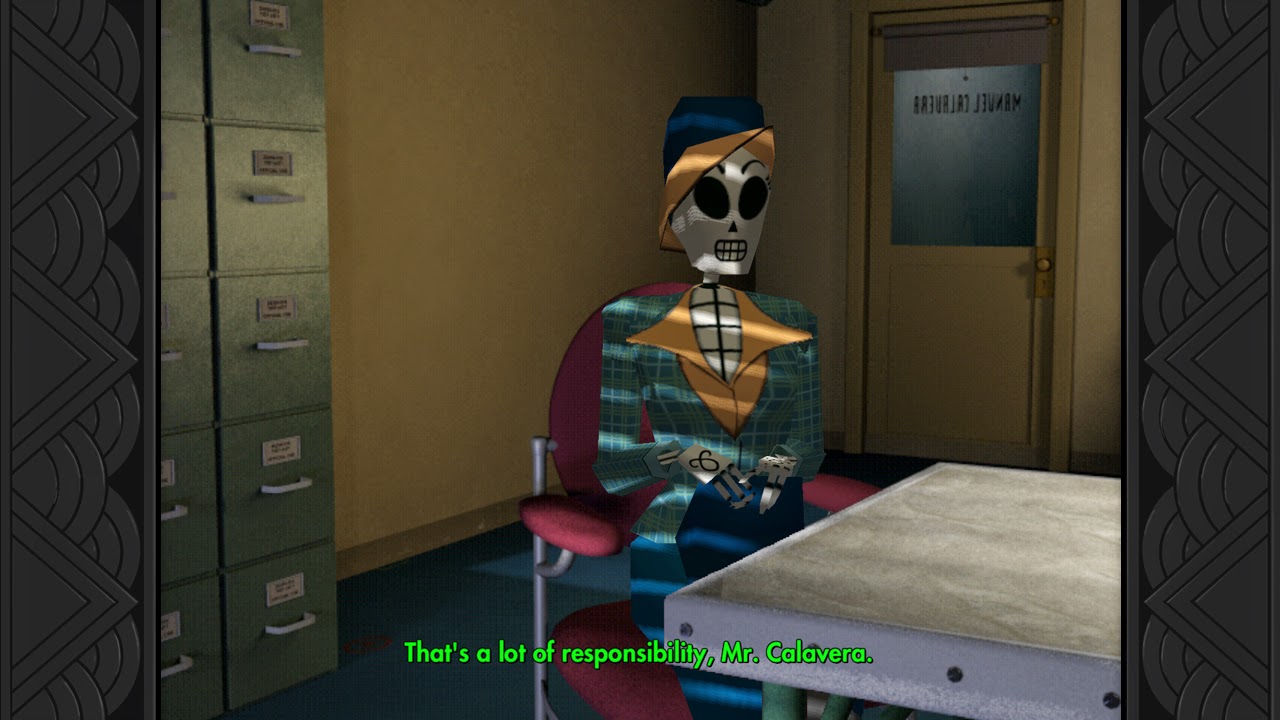 As this is an adventure game I will not bog you down with too many details of the story as I do not want to ruin the experience for you. All I will say it is full of great twists and turns all the way to the end.
The story is told through puzzles. Everything you need to progress can be found in this glorious world but it is knowing when to use them that is key. You will find yourself aimlessly moving around each scene trying your best to work out what to do next. Grim Fandango is a lot harder than previous Lucas Arts games I played and i know my 10 year old self would have been screaming at the computer screen. But this is the brilliance of Grim Fandango; not matter how difficult is become you will keep trying until you find a solution. It may not be straight away but you get there in the end and that is all that matters! I managed to get through the majority of the game without any assistant but there were some puzzles that I had to look up. What does not help is that Grim Fandango has no hint system whatsoever, so if you are trying to get through it on your own without any outside assistance, you may find yourself staring at the same scene for a long time. Yes, when this originally came out there was very few ways of finding out solutions other than word of mouth but in these modern times, where time is very precious, there is no shame in looking for help. Even with a guide though, some puzzles require some actual skill to complete. Overall the game will take about 12 hours to complete but this is all down to how you manage with the puzzles. If you manage to get through them with ease then you will hit that time but if you struggle then expect that playtime to increase slightly. All in all, the game can be brutal with the puzzles but in the end it is a lot of fun. 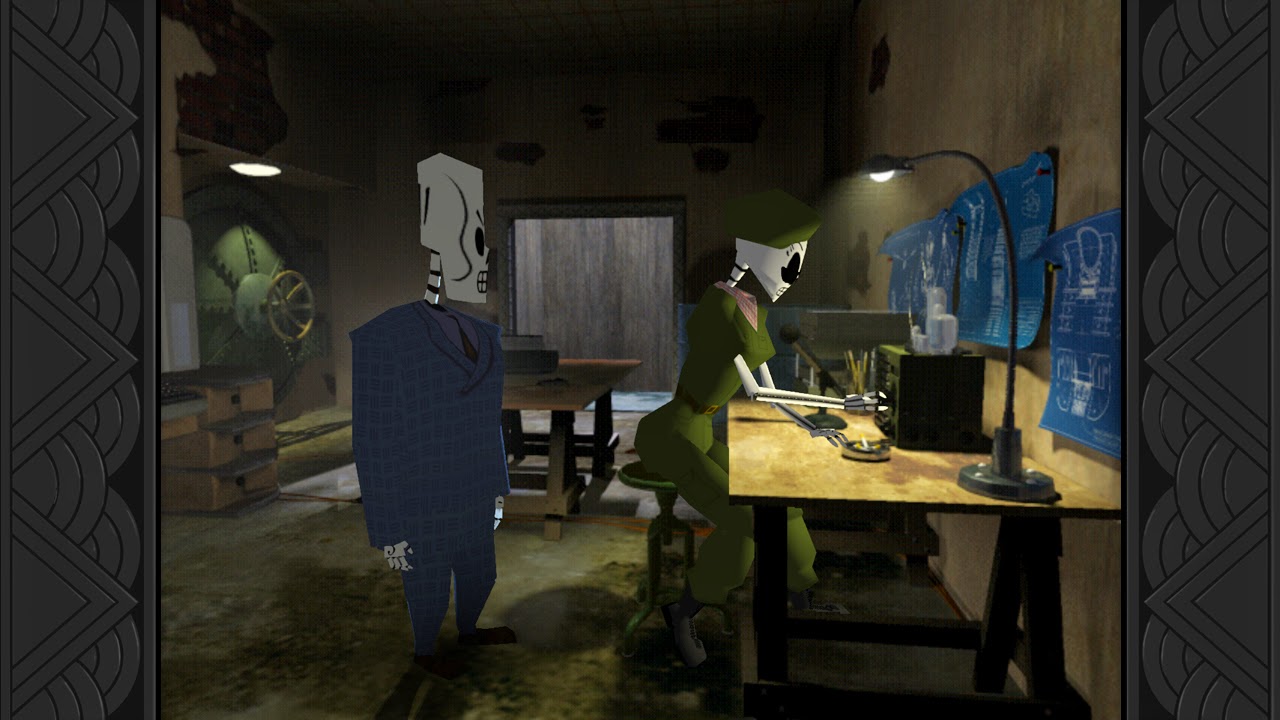 Graphically, Grim Fandango is what you expect from a full remaster. The textures have been smoothed over for our HD pleasure, advance shadows are now used and the entire score has been re-recorded. Even though it has seen many improvements to art style is still present. The only way in which I could describe it is how i would imagine 1930s New York would be but mixed with Mexican Folk Lore. The soundtrack is just amazing; it adds a lot more atmosphere to the already rich world and the backing of a full orchestra boosts it. One addition to the remaster has had a few players rejoicing and that is the way in which you control Manny. Originally the only option you had was tank controls which are just a nightmare. Some gamers love them but for me I am glad I do not have to play using that method. 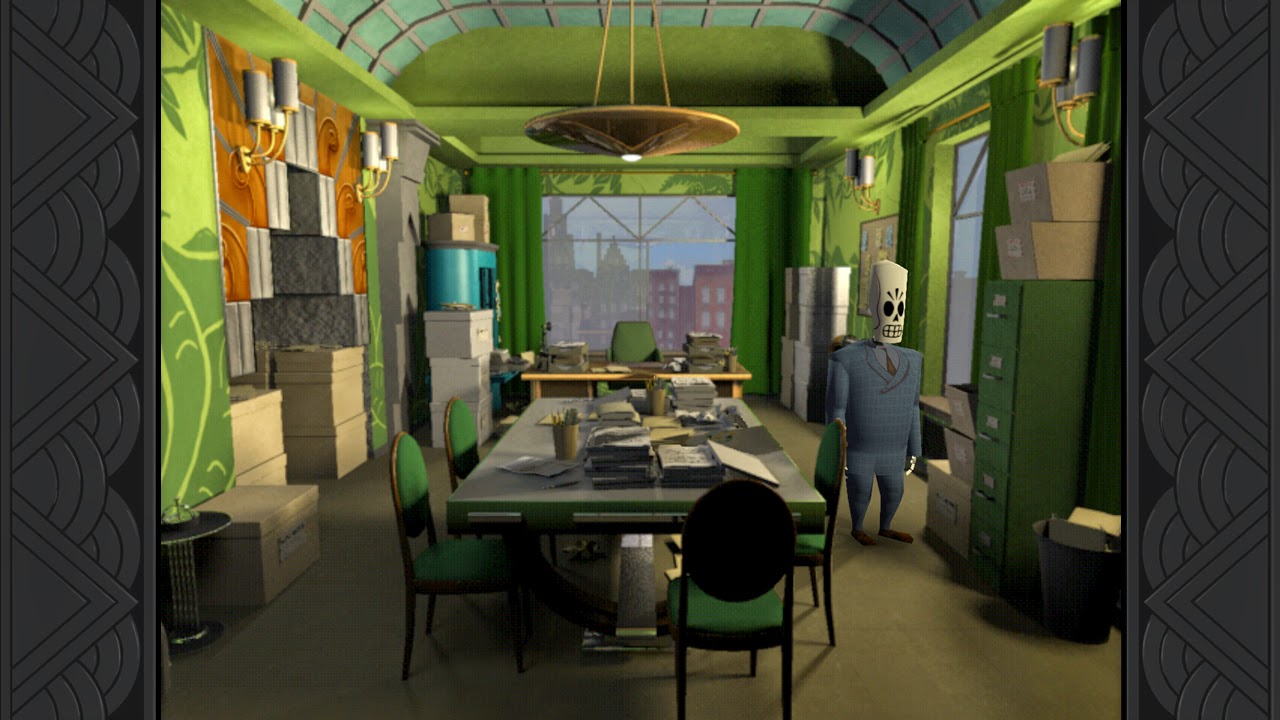 Grim Fandango is a dream come true for myself and many other gamers out there. It captures what was great about the old Point and Click Adventure games. Modern games (such as those from Tell Tale) do not hold a candle to these older ones but you can see where they got their inspiration from. Even though I did not play when it originally came out I can appreciate the impact it had 17 years ago and I believe that nothing has been lost in the remaster.

Grim Fandango Remaster is short of a master piece.  It has a few flaws that have not aged well but all in all it is a great game.  It does justice to the original game plus it allows fans of the game to experience it all over again and new players to experience it for the first time. It is a true adventure game with great characters, a dark humorous story and above all fantastic puzzles. It is a shame that there is no guidance system added to the remaster but I feel that the development team wanted to keep as true to the original release as possible. Yes, it can be very hard at times but who really knows how tough it is to get to the Ninth Underworld anyway?

Who Should Not Play This

Posted by Unknown at 19:52
Email ThisBlogThis!Share to TwitterShare to FacebookShare to Pinterest