Atelier Shallie: Alchemists of the Dusk Sea is the latest and final game in the Dusk Trilogy developed by Gust and published by Koei Tecmo,released on March 13th 2015 in Europe for PS3.

Water is drying up without a reason and the Dusk Sea is growing. A pair of young women, who are both alchemists leave their homes to uncover the mystery. What kind of adventure will unfold ? 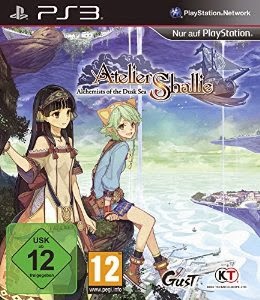 As already mentioned, Atelier Shallie: Alchemist of the Dusk Sea is the last title in the Dusk Trilogy. It´s your classic Atelier RPG from Gust. Commanding your party you will be tasked with figuring out why the water is disappearing, causing all forms of life to die from thirst and hunger. The main protagonists Shallotte and Shallistera will meet and reach for their dreams, will they be able to solve the problem or are they doomed to fail?

At the start you discover the issue and the fact that Stellrad is one few places that still has water. Central deployed Solle to work together with the people of Stellrad to investigate what´s going on and to stop the water from disappearing. You are presented with the choice to follow Shallotte or Shallistera who both go by Shallie as they get involved with the investigations. They start off surveying the areas around Stellrad but thing are never going to be that easy. Along the way during your journey you will meet familiar faces and some new ones.

Visuals of this title are very beautiful, smooth the colours are bright and vibrant but never feeling over done. The game draws you in with its high-fantasy landscapes that you might recognise from the previous Atelier games. When you are on top of a bone ramp however it does appear to look like you're floating just a little but not enough to really bother most. Sound effect´s and music go together well, assisting this is the fact that the sound effects and voicing don´t overlap. The soundtrack is top notch as is to be expected from this developer. Voice acting is done to a very high standard, being nice, clear and with an excellent, and as such all the character´s voices fit very well.

As you step in to the shoes of either character the controls will be somewhat similar with the exception of their weapon of choice and as such their attacking style. Controls are easy to learn you will pick the up in first 5 minutes of play which is very nice. The tutorials for everything are easy to understand and so are very helpful meaning most will quickly come to understand how things work and the flow of it all makes learning really fast.

The world map is pretty basic, there areas on the map that you can travel to,and to do so you simply  pick one and go. More areas will unlock as the story progresses and the areas you explore you be completed by defeating all monster or collecting all gather spots in the area. No time passes when you are on the world map, in fact no time passes at all. The only way time truly passes is through the narrative. There is no real Day/Night cycle which seems like an odd omission considering it is a feature in most other Atelier games. Once you enter a place on the map you will see an open area to explore where monsters are running around, entering battle is as simple as hitting the square button to swing your weapon to get the first hit giving you the advantage or if the enemy runs into you allowing it to strike first.

Battles are an entirely turn based affair. Some enemies will have a noticeable purple aura around them and a text will appear on the screen saying there acting strangely, be careful in these battles as the enemy will cause more damage to you as well as gain other randomised bonuses. Available commands are standard RPG styling with Attack, Block, Item and Skill/Magic plus you have support from back row/stand by party members but you are limited to three party members active on the battle field at any time.

Gathering in the field is very simple, you run up to a sparkling spot and press action causing you to gather the items. If you see a barrel try swinging at it because if you are lucky it will be one of the breakable ones which is an alternative way to get items. The gage at the top of the screen will fill up from battles, this can be help to fight stronger monsters but also to find rarer items or to gather more items faster while you are on the field.

Syncing items at your Atelier is important since you will always want better gear and items to use in battle or for healing. You can go shopping in Stellrad and the stores will supply you with ingredients, gear and new recipe Books. Crafting the gear is normally the best since the items you create have better stat bonuses. Imbuing is a fancy way to craft items, it works in much the same way in my experience with the exception of also being able to disassemble items.


Atelier Shallie:Alchemist of Dusk Sea its another Atelier that should not be missed if you love this style of game. It has beautiful art and music with a nice, if somewhat shallow story to go along with it. Leading the Dusk Trilogy out on a high note, Gust have once again outdone themselves.

Posted by Unknown at 12:21
Email ThisBlogThis!Share to TwitterShare to FacebookShare to Pinterest