Original released in 2014 on PC, Shovel Knight was met with a great reception. It is a game that is talked about a lot within gaming community's and is recommended by many. With this in mind I still find it strange that I have not played it yet or even seen extensive gameplay footage. Thanks to the increase of indie PC titles hitting consoles I finally get a chance to finally see what all the fuss is about. The only thing I know for sure is that the number one feature that draws players to Shovel Knight is that it feeds from one of the strongest forces in gaming, nostalgia. 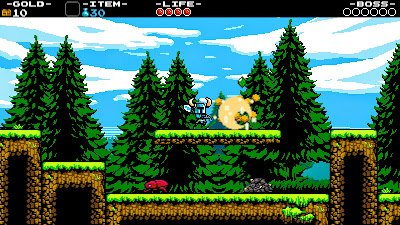 The story is told through 8bit art and text - the same ones you say during the NES era of gaming. It is a simple tale of two Knights bringing peace to the world until one disappears forcing the other into a life of isolation. During this time, evil has risen again and it is up to Shovel Knight to save to world again. You progress by playing levels spread out in the world map and once defeating bosses of each area a new path is unlocked for you to explore. 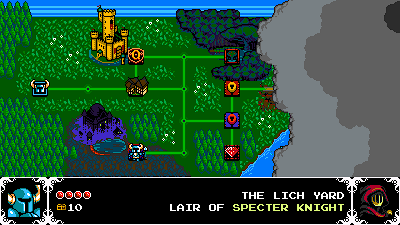 The gameplay reflects that of what you would expect from the 8bit era. Easy to pick up but will take skill (and a lot of patience) to master. At its core, Shovel Knight is a simple 2D platformer but as you venture deeper into this title you find that you will require a good amount of skill to complete the game. You may stumble your way through the levels but I can guarantee you will not have fun doing it. There is no one holding your hand in this one - this is old school Dark Souls. Seriously, the game can be brutal some times and it is not even the enemies causing issues, even though the Bosses can be tough. No, it is the platforming - they require great skill and timing to achieve. Trust me, you will be very close to destroying your consoles whilst attempting to complete it.  All I can say is if you have played Simon's Quest and hated being pushed backwards when hit, you are in for one heck of a fun time here. 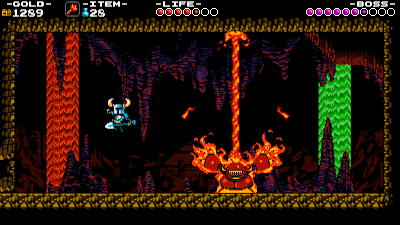 What Shovel Knight does well is mix up some of the greatest features from legendary franchises to create one hell of an experience. On paper it would sound like a crazy idea which would never work and even if you explain it out loud it still sounds bonkers but some how it works. It is a credit to the developers as they knew what they wanted to create from the start and never deviated from that plan.

For me I cannot fully understand the love of newer games using 8 bit graphics. I know it is all about the gameplay but I am slowly starting to get bored of it all. I know that this is one of the features that make this game appealing and I understand that but it is not for me anymore.  It does look good but I have to side with the gamers wanting a little more power from their console of choice.  But hey, they say variety is the spice of life. 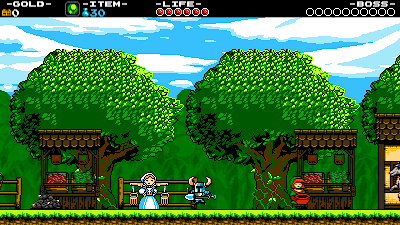 The sounds track is very good and well composed but in true likeness of games gone by, it loops and it never stops. When you are repeating sections over and over listening to the same track looping, you may start to go slightly insane. 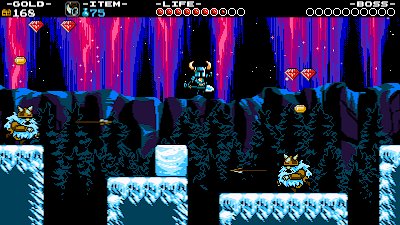 Shovel Knight is a great celebration of a golden era of gaming. It plays well and looks just as great. I know this is another indie game going for the retro look and I do understand the frustration some gamers may have due to this but it is a look a lot of gamers still love. Yes, at times it does seem a little chaotic and disorganised but it always pushes through. Shovel Knight for me sits in the category of games that I enjoy playing every now and again. It does a lot right but I feel that is is enjoyed more in short bursts. This way you will not be over saturated with nostalgia or be tempted to destroy a controller or two.

Posted by Unknown at 15:10
Email ThisBlogThis!Share to TwitterShare to FacebookShare to Pinterest