Thanks to anyone coming back today who read the post yesterday! At least now if anyone starts throwing slurs around about the JRPG's you play, you'll be able to put em in their place with some simple logic. So whats in store today? I'm going to do a retrospective on Onechanbara: Bikini Samurai Squad. With OneChanbara Z: Kagura still not looking like its going to be localised (although the Ps3 version is a viable import with the Ps3 not being region-locked) I thought it might be good to look at its previous entry in the west.

Story (Wikipedia)
After the defeat of Reiko, Saki regains control of herself, and the two sisters return to a somewhat more normal life. However, this newfound peace isn't set to last, as once again Tokyo is infested with zombies, and the cursed bloodline of the two (Aya & Saki) sisters is set to clash once again with their own fates.

Wait! Isn't this clearly a perverted game? Look at the screenshots!!?? I suppose it could be so. I wouldn't quite put it on the same level as something like Dead or Alive: Extreme Beach Volleyball though and it does depend on how you want to dress your character. Whereas that DoA release was blatant perverted fan-service, this has more of an Exploitation/Grindhouse feel & look to it. The story and overall setting of the game is as trashy n camp as it gets. Never watched any of that trashy cinema from the late 60's to the early 80's in the states? Man you mustn't get out much. I can see why your gushing about it apparently being perverted. 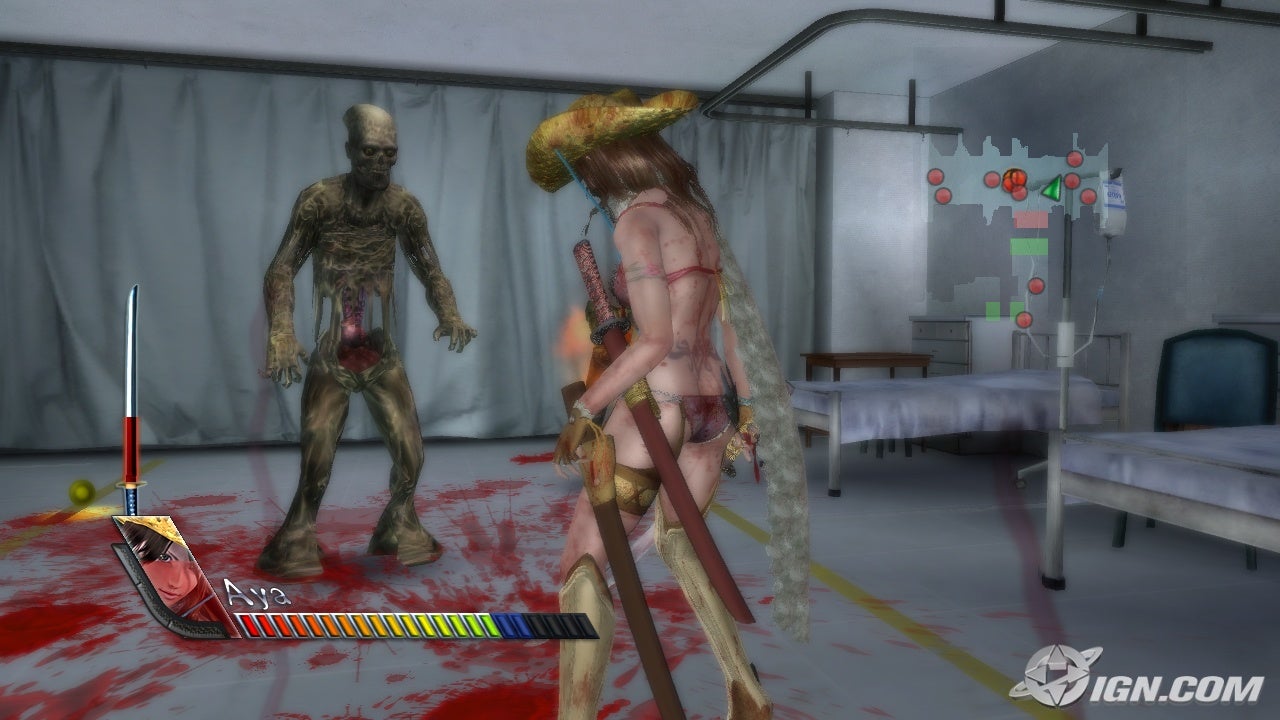 So how does it play? As you'd expect its a hack & slash adventure. Its your typical button mashing affair with a couple of quirks. You'll spend most of your time cutting through waves & waves of lumbering zombies that you can dice up at will. The game features 2 bars that fill during combat, the first shows the current character's splatter gauge, which increases as the character is covered in blood. Once filled, you enter rampage mode, dealing more damage but also taking more damage from enemies while gradually losing health. The second shows how much gore is on your weapon, uncleaned swords become blunt for example, dealing less damage. If the meter is filled, the character's weapon will begin to lodge in enemies forcing you to remove to continue fighting. These two aspects mix the gameplay up a little bit. Boss battles appear during the game too and these range from easy to frustrating. In total there are 20 missions to play through, although there is some re-treading during some of these.  There are 3 characters to control. Aya is probably the most balanced and she can wield 2 swords, Saki only wields one sword but moves & attacks quicker and finally Anna wields guns instead of swords & has basic melee attacks. Also a few other game modes are thrown into the mix like free play, quest and survival. The 3 characters combine to give the game a different play style depending on the character you choose, plus each character has their own unlockable costumes etc. There is a dress-up mode to the game that allows you to tweak costumes, allowing your character to be as dressed, or undressed, as you like. Split-screen co-op is also thrown into the mix to liven things up a little.

Graphically its nothing to write home about. As you'd expect from a budget niche title, it looks a bit rough around the edges. Textures are lacking the refined detail of the bigger budget releases out there and would probably be regarded as last gen if it wasn't for the current generations better filtering techniques. Your character is fairly well detailed, as you would expect, but the animations at times look a little too stiff. Enemies are average in the detail stakes but they do dismember quite nicely. Blood goes everywhere, covering your character and splattering on the screen. the game does have a stable frame-rate but be warned, loading times can be a tad long on the odd occasion. An install would rectify that I suppose. The 2 player co-op can cause the occasional drop in framerate but its never too bad to actually ruin the gameplay for the 2 of you. Anyone expecting sumptuous visuals or a gorgeous art style will be most disappointed.

Personally Id recommend you watch the film instead. While the game does have its moments, the film is more enjoyable to watch and still contains all the same content & characters pretty much as the game. Eri Otoguro is quite delicious as Aya too. Back when I first played the game I was watching a lot of Grindhouse cinema so it appealed to me a lot then. Now when I look back on it, it was an alright game but maybe not as good as I thought it was. I do enjoy trashy games though (Recently completed Captain America on Ps3 lol) and this is one of the better ones, but If you had the choice in the shop, Pick the film up instead. If you find the game cheap enough, its worth a punt! It does have that B-movie charm that so many of D3's published games tend to have. Its just a shame its gameplay isn't as well developed as the likes of EDF. It does come recommended if the price is right as there's easily 15+ hours of mindless action here if you wanna go for all those collectibles n the like.
Posted by Unknown at 15:57
Email ThisBlogThis!Share to TwitterShare to FacebookShare to Pinterest