Last night I had me some Ps4 hands-on. The night didn't start too well with the event being delayed so I was stood out in the cold for half an hour while staff constantly bigged up the Xbox One at every opportunity to me until they realised I was on the verge of throwing punches if I had to say no to an Xbox One preorder again. There was also the disappointment of no Killzone: Shadow Fall. Yes, I love me some Killzone every now again. Still, Once Id clasped that Dualshock 4, all was forgiven. So how did it go?

Console/UI/Controller
I'm going to deal with the controller first. Ive had my reservations with the redesign mainly focused around the analogs. They looked to be similar to how the 360 has them, I use a 360 controller on PC, and Ive always found the movement to be a little restrictive on the 360 compared to a DS3. Thankfully the freedom of movement is still there with the redesigned Dualshock! I stand by my tweet last night when describing the DS4 too - "What do I think of the DS4? Awesome. Its like holding the firmest breasts of the best hunni. probably better..." It just seems to sit so comfortably in your hands and the textured grips on the underside of the controller ensure the slippery aspect of the glossy Ds3 is a thing of the past. The size is also odd. From images its always looked bigger, more bulky, but last nights hands-on painted a different picture. Its actually not that much bigger than a Ds3 with most of the extra size coming from the widening of the centre to accommodate the touchpad. I was left very much surprised as Ive always considered the Dualshock to be a superb all-rounder with its design, but this new design takes it a step further yet still feels natural for those with a long history of Playstation gaming.
How about the Console? Well they were locked away inside a booth, but I have had the privilege of holding one a while back. Its very similar in size & weight to a slim Ps3 (not a super slim) with its slanted design giving it a sleek look & those grills on the back adding a little menace. The Ps4 really does light up like it does in the gif too! With the consoles locked away I wasn't able to test how loud the system is with its cooling or disk access, all demo's appeared to be loading straight from the HDD too. The UI was also sleek. Ive never had any issues with the XMB, Ive always considered its functionality to be superior to most UI's, but the redesign for the Ps4 is to be expected. While not as functional, its definitely more sleek & stylish with the added benefit of a multicore CPU ensuring everything is snappy.

Knack was probably the big game of the hands on session, although some would say FIFA14 but meh, and it didn't disappoint. The game has always intrigued me due to it being the only action platformer of both consoles to launch (actually does the Xbox One even have one? I dunno.) that's had any spotlight put onto it. I came away surprisingly impressed. While the gameplay is basic, its intended for younger audiences afterall, there were still times of difficulty for the more seasoned gamer. The ice caves in particular when trying to land blows on enemies while dodging arrows and fighting the slippery ice being a source of frustration I remember. The gameplay also switched out to a stealthy puzzle segment too for a short while so theres some variety to be had. Graphically it was nice too. 1080p crispness is confirmed, although a little bit of extra AA could do to smooth things off a little. IF that was done, we'd be looking at Pixar movie quality graphics. Its that good! Framerate was also butter smooth and particle effects n the like were suitably impressive. While its not going to be everyones cup o' tea, those that give it a try will be surprised if the hands-on session I had is anything to go by.

Contrast - This was probably my favourite of the bunch I played. It was just , I dunno. Its hard to put into words my feelings on the game from what I played. Definitely impressed though. It has a nice 1920's Tim Burton style going on which makes it look different to most games out there. Plus, 1080p again and some nice lighting effects keep the graphical side ticking over. The gameplay though was pure puzzle platforming. Basically you can 'shift' onto any wall that has strong light shining onto it and you become a shadow on the wall. In this you can then run along shadows that are projected onto the walls to access other areas your not able to usually. Its a simple mechanic that works flawlessly. Later in the demo you are also able to manipulate spotlights to generate your own shadows and create a pathway for yourself once you shift. There was also a cutscene of shadows talking on a wall as you eavesdrop, so does that mean theres some kind of time displacement with regards to shadows? or maybe somethings happened and everyone has become a shadow? None of that is explained in the demo, it was just pure gameplay. It was absolutely fascinating though and hopefully is a sign of things to come with regards to unique experiences from Sony's indie push. One to keep an eye on for sure.


I only managed to Solid Snake a few pictures as when I enquired with the reps to record some Knack footage I was told that No pictures or Footage was to be taken. Dem connections only go so far it seems! I suppose I should get some 'Otaku Gamers UK' shirst made up so people know who's in the house at these events. Still stealthily snapped a few pictures anyway!  Got a couple of the controller, one with my average sized hand holding it to give you an idea of its size, plus a booth pic of the Ps4 and a pic of the menu on Knack to show the clarity on offer with 1080p. I was a little disappointed about this aspect of the hands-on, but it can't be helped I supposed. Sorry guys. Overall I came away impressed. While I'm still waiting for some eastern games to be announced before I decide to grab a Ps4, Probably stump up the cash in the new year I think, Its still an impressive console. Its not surprising Sony have been riding a goodwill wave since February. Tonight though is Hands on with the Xbox One, although I doubt its going to be as enlightening as the Ps4 due to its heavy focus on its own American demographic. Still, it could surprise me! Ill let you know tomorrow how it goes. 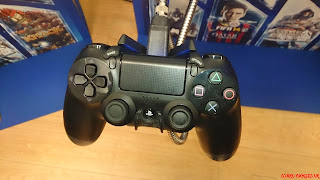 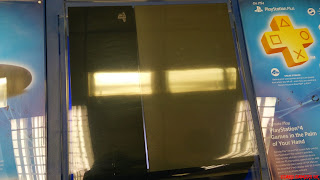 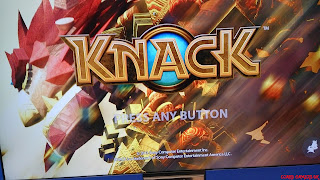 Posted by Unknown at 15:55
Email ThisBlogThis!Share to TwitterShare to FacebookShare to Pinterest