"Just because something is dumb, that doesn't mean it can't be brilliant." 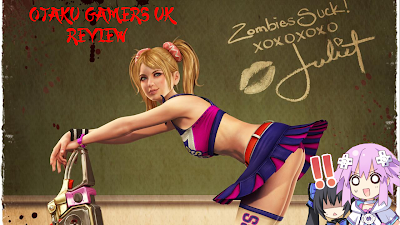 OK. First things first. If your the kind of person who just hates this kind of content and writes fervent blog posts about how wrong it is to base a piece of entertainment on a concept like this, Leave. Now. Move your mouse pointer to the top of the page and close the window. I'm not going to mark this game down due to its content. I refuse to pander to you types of people. Personally I like American Grindhouse movies & Japanese exploitation flicks so the fact this game has the audacity to style itself like them is great. They gone? good. On to the review!
For those still here, yes this game is just like those cheap, sleazy movies you tell everyone you hate but love to watch. The game features enough gore, swearing & panty shots to have any exploitation fan smitten. With Suda51 corroborating on the game, the story premise is just as wacky as you'd expect. The story opens with Juliet making her way to meet her boyfriend who ends up getting bitten by a zombie and Juliet has to perform a magic ritual on his decapitated head to save him. I'm not making this up! It later turns out the zombie apocalypse was brought on by some goth kid in your school opening a portal to rotten world, so off you go to destroy the zombie souls and close the portal. With it being Juliets birthday you'll occasionally meet the other members of her wacky family which adds more humour & unlocks more weapons for you to use. What entails with the story is an hilarious romp through 6 levels. Indeed, there is only 6 levels. While there are only 6 levels, once completed multiple ranking mode options are unlocked (Time, Medal, Score) to boost your medals and move up those online leaderboards. Still, Its only 6 levels and altogether it can take 5-6 hours to make your way through them. The game manages to pack a lot of content into those levels though, featuring a fairly robust selection of unlocks and collectibles. When not finding collectibles in the levels, they can be purchased from Chop2Shop.zom which appears as a stand within levels. Here you spend your hard earned medals on extra moves, stat upgrades, costumes, Mp3's and concept art. Lollipops, as well as being your source of replenishing health, also have collectible ones to seek out. With the game also having a good & a bad ending depending on how many classmates you rescue, completionists will have more than enough content to chew on. Throughout your journey, Juliet is accompanied by her boyfriend, Nick, who is a disembodied head hanging from her waist (seriously) and accounts for at least 80% of the games comedy with his witty quips.  At certain points in the game, Nick's head can be attached to a blue decapitated zombie's body, which then begins a mini-game of rhythmically pressing buttons while Juliet partakes in cheerleading to help clear the way and progress. Each level also features its own mini-game segment ie Zombie Basketball which requires you to decapitate heads and send them to the basket to score 2 or 3 points and progress further. The best of these is probably the 8-bit gaming style segments on your way to taking down the Funky zombie. Extra weapons are also unlocked as your progress like the Chainsaw Blaster, further boosting your armoury and giving you more options for dealing with the Zombies. Acquiring Nick Tickets also nets you special moves that use Nick as the weapon. A lot of content then. While the lack of levels is probably the main gripe, the game is also relatively easy on Normal. I managed to complete a review playthrough & collect about 50% of the collectibles (without going out of my way), all while only dieing twice. A bump up to Hard is recommended then! Even then, to fully 100% the game and score that platinum, Id say your looking at about 12-15 hours of gameplay which isn't too bad. 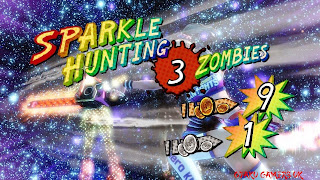 Lollipop Chainsaw is a hack & slash game through and through. Each level requires you to fight your way through to the end and fight a boss. The boss characters are actually quite interesting though featuring  a Punk zombie that spits obscenities at you all the way to a Hippy zombie. There's more than enough variation to keep you playing. First things first though to get this out of the way. The combat system is rock solid, but not at first. For say, the first hour, you'll no doubt think its clunky. Its not until you start unlocking special moves and combos with the medals you earn that the combat system really comes into its own. Once you've got a feel for the game it all falls into place. Your usual combinations for a Hack 7 Slash title work just the same, Square for light attack and triangle for Heavy attack. Circle gets plumped with dodging. Your light attacks involve the use of your pom poms so obviously not much damage is done, but they can leave zombies groggy which makes them vulnerable to a single chainsaw swipe to lop off their head. Heavy attacks can kill zombies in a few hits but are a LOT slower than light attacks as they involve exclusive use of the chainsaw. During levels you'll occasionally fight zombies that are tougher than the usual fodder and take more skill to dispatch (some of these even have names, another collectible aspect to seek out!) and the game does mix things up every now and again too. Wanna mow down zombies in a combine harvester while Dead or Alive's You Spin Me Right Round (Like A Record) plays in the background? You can in this game! You also have a star meter at the bottom of the screen. By filling up your star meter by defeating zombies, Juliet can activate a special state which powers up her chainsaw for a limited period, allowing her to easily defeat zombies and obtain Sparkle Hunting more easily all whilst 'Hey Mickey' plays away in the background. Sparkle hunting not only looks awesome, but it serves to give you bonuses for managing to decapitate 3+ zombies in a single chainsaw swipe. When a level is done, you'll be graded on multiple aspects of how you did in the levels so if you want to climb the online leaderboards, you gotta be as quick & stylish as possible. Aside from the one minor gripe Ive mentioned with regards to the combat system when you first start, there's nothing else really wrong with the gameplay. Its rock solid and plays fine so it never feels like the games fault if you screw up. 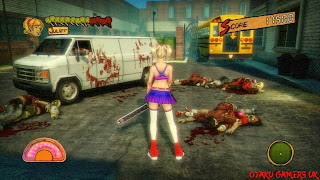 As you'd expect from a game basing itself on a Grindhouse/Exploitation theme, Its both quirky & lo-fi. While not everyone will like the lo-fi look, especially those in love with sharp & clean graphics, It nails its theme perfectly. The grainy filter & slight cel-shading keep things looking B-Movie cheap, while the punchy bright colours ensure things don't look at all dull. Lollipop does feature some fairly simplistic assets in its texture work and level design to add to its effect. Juliet is superbly animated as you'd expect with all of her special attacks getting most of the SFX work, the quirky rainbow effects of her weapons look ridiculous and cool. For the most part everything looks good enough. Yes there is the odd up-skirt camera angle & the like so you may want to cover your eyes if that stuff leaves you appalled or flustered. The framerate though never seems to falter (I wouldn't be able to explain why if it did) and everything ticks along smoothly. Aside from the quirky, colourful effects though, Visuals are a tad lacking. But that slack is picked up by the superb soundtrack. I'm going to say it again because it needs saying. Superb soundtrack! Everything from punk, viking metal, rock & roll to quirky 80's pop makes an appearance on the soundtrack. It never lets up and never grates either its so good. To be honest Ive not been on the game for 4 days now and Ive still got some of the music bopping around my head from time to time. Once you've got enough medals you can even purchase the songs to create your own soundtrack for when your playing. While its Grindhouse style wont be for everyone, it nails it completely with its lo-fi visuals & punchy soundtrack. The only issue is the odd occasion when the camera has a quirky moment, but its a minor issue and wont effect how you enjoy the game. 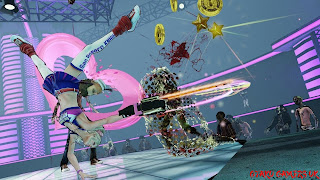 Conclusion
Lollipop Chainsaw features the spirit of those arcade games of yesteryear, with its Hack & Slash combat married to a gameplay system that's all about getting that high score. While a few issues like its lack of levels & lack of a challenge on standard difficulties may breed a little caution, Its a game that's worth at least a playthrough. The Grindhouse/Exploitation theme is absolutely superb and while those that find it vulgar will skip over this, everyone else will find a game that's hilarious from start to finish. While it lasts about as long as it takes to get to the soggy paper stick your lollipop was clung to, its just as sugary sweet an experience.