What a title eh? Fresh under the radar release from my favourite niche studio NIS famous for such titles as Disgaea, Soul Nomad, Phantom Brave & successful spin off series PRINNY!. Released on 25/10/2013 TGFP (as it shall now be known) is a Roguelike game for the Playstation 3, for those that aren't familiar with Roguelike I shall try explain what I mean by this.

Roguelike is a sub genre of Role-Playing games, usually they tend to consist of randomly generated dungeons (thousands of them!) with the bare minimum in with regards to visual distractions. The main focus is exploring the dungeon floor you are on till you find the stairs down to the next floor, wash & rinse till dungeon ends. Usually tile based with a fast version of turn based combat & usually tougher than your standard RPG in terms of battles & traps. Another feature Roguelike uses a lot is Perma-death, if you die you lose your save which adds to the tense atmosphere these games set (fortunately a lot of them tend to ignore this feature nowadays!). 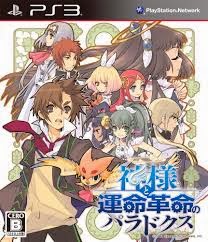 Renya Kagurazaka is a normal high school loser with no luck to his name what so ever, never won a thing in his life and never will.....until today. Passing a cosplay maid Renya's life is transformed as he enters a raffle and wins the first and biggest prize of his life!.
What is this you wonder? Transported to the heavenly Celestia you are told that you have won the grand daddy of all prizes, you have been made God. No that's not a typo you are now the Almighty himself!.

Turns out the Cosplay maid was an Angel! She isn't the only one too! Another 3 dressed as maids the tomboy, a sweet sounding, large breasted (this is pointed out during the game using the term Old Testament style tits!) older sister type, obviously angry evil angel. With them are 2 male angels which look and act like butlers and a shut in who communicates via messages.

So what is it exactly you will be doing as God? Glad you asked! You'll be using the Fate Paradox machine to answer prayers and wishes!. This is where the dungeon crawling comes into play but more on that in the gameplay section!.
Celestia is a bright and vibrant setting full of character with the angels and monsters hanging around to talk to.

Inside the Paradox machine this is where the setting takes a hit, you are presented with level upon level of generic backgrounds e.g Castle setting. This is a common theme for Roguelike so while expected from it people looking for a little more detail in the dungeons will be let down.
The prayers you answer are brilliant aswell, not wanting to spoil them I'll only tell you that the tutorial one you do was made by Cinderella!.
There is a deeper story behind this but I will not go into it as part of the driving force for this game is the story.

So far the characters have been pretty standard fair for an NIS title if not a little disappointing. Coming off the back of the fantastic Disgaea D2 these characters just aren't as likeable or as funny as previous games by this company have made (another fantastic example is Z.H.P).
Also I have to point out that the sprite work doesn't seem as good with this title. Unlike the sharp & crisp HD sprites of D2 in Paradox they seem at points quite pixelated and don't look quite as good. 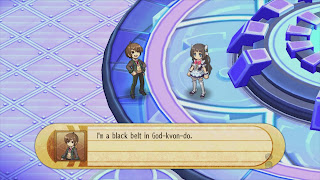 Here we have the meat of TGFP while the story is important to the game in typical NIS fashion there is buckets of gameplay!.
The meat of it is entering a dungeon, killing monsters and reaching the bottom floor. All this while making sure you have enough energy to last you, you get this back by eating meat either bought or found on the floor naturally!.

In typical Roguelike fashion every time you enter a dungeon you are reset to level 1 BUT every time you leave a dungeon the level you had achieved upgrades your base stats. Though you may be a level 1 you will be significantly more powerful than you were originally!.
Equips work in a different way too, they still enhance stats but unlike some Roguelikes they don't effect how you attack e.g having a gun doesn't shoot in front but just act like a punch. Instead anything you equip gives you a special power which consumes SP. Attack with these equipped for long enough and they "burst", these means when you return to Celestia you can use them to strengthen your base build but more on that later.
Another major difference is moving around the map or holding X & O revive your HP & SP at the cost of your energy so it's all about managing levels (you can use items aswell to keep them up).

As previously mentioned you can modify your base build in Celestia using "body modification". When an item has "Burst" you are given panels in relation to the item for example goggles give you HIT panels and weapons ATK. What you do then is place panels along a chessboard which make your base as level 1 a little stronger with every piece.
All of the above are things you have to take into account before you delve into a dungeon. Should you fall in a dungeon you arrive back at Celestia but missing all your equipment making mistakes brutal. 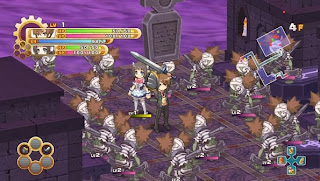 This creates a near perfect a Roguelike game for fans of the series. A game where it has a huge amount of grind and risk versus reward in abundance.
As mentioned previously I came into this off the back of the amazing Z.H.P, i should mention that I am not a fan of this genre to be fair. I have enjoyed titles from it mainly Izuna and mostly Z.H.P which was helped by a fantastic cast and NIS's signature comedy. Unfortunately as mentioned earlier not a single character made an impression on me to the point iv had to reference the game in remembering each characters name!. 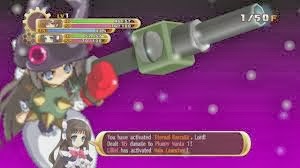 This is such a let down for me considering iv always found the Disgaea series having memorable casts and even some of the side characters in Z.H.P are etched in my memory (Chiti Wok anyone?!).
I feel for me personally with it lacking that element I felt no drive with TGFP on top of what seemed like a cutscene hitting after every floor of the dungeon which also seemed to last longer than the time I spent on that floor!.

7/七 - Yoi (Good)
Posted by Andi at 15:08
Email ThisBlogThis!Share to TwitterShare to FacebookShare to Pinterest