Are you tired of SEGA week yet? Tough. Its still going. I think Tuesday is the last day for it, but Im not sure. If anything, doing this has allowed me to relax and enjoy my gaming for a change. I'm usually ploughing through games and delegating my time for games I'm looking in to or reviewing. This week has been a joy and so the articles continue! My new AV cable came for my Saturn yesterday so I duly replaced my Dreamcast with it. I don't know why, but I dusted off my copy of SEGA Rally. Last time I had my Saturn set up it wouldn't work. The disk doesn't have much in the way of damage or anything so it left me baffled at the time. Popped it in last night and it worked. Tears of Joy! Today then I'm going to do a short post on the a few console releases of the series

SEGA Rally Championship (Saturn)
The player can enter a "World Championship" mode consisting of three stages: Desert (which resembles African savanna), Forest (which resembles South American forests) and Mountain (which partly resembles Monaco and Corsica), where their finishing position at the end of one course is carried through to the starting position of the next course. In this mode, it is impossible to reach first place position by the end of the first track; thus, the player must try to overtake as many opponent cars as possible on each track (while staying within the time limit), and gain the lead over several tracks. If, at the end of the third round, the player is in first place, they are able to play a fourth secret circuit called "Lakeside" (on the Saturn version, this course may then be played in time attack and split-screen multiplayer modes).Three cars are featured in the game; Didier Auriol's sixth generation Toyota Celica and Juha Kankkunen's Lancia Delta HF Integrale which are both available from the start, and Sandro Munari's Lancia Stratos HF which can be unlocked.
Considering its an arcade port, I found it to be almost the same on console with barely anything cut. Its graphics are still fairly smooth and the courses are still just as superbly designed as you remember. I quite enjoyed firing it up yesterday. The unforgettable "Game Over Yeeeaaaah" was just the icing on the cake. No doubt Ill be playing through it again sometime soon. 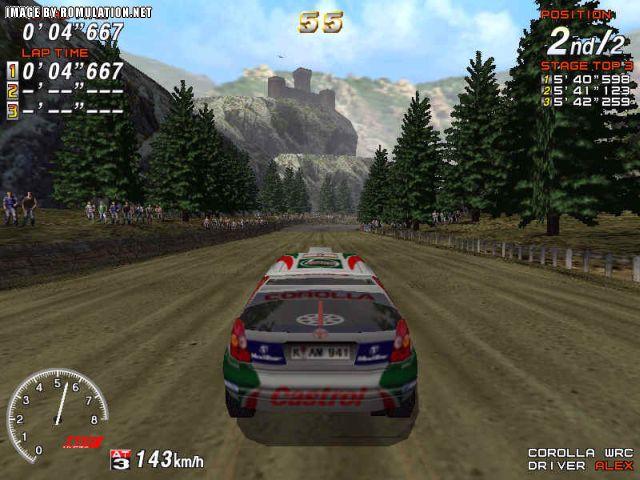 SEGA Rally 2 (Dreamcast)
As with the predecessor, Sega Rally Championship, the object of the game is to successfully drive along a track while reaching checkpoints and thus be rewarded with more time to enable the player to reach the goal. Sega Rally 2 added new vehicles, new environment settings for the circuits (including snowy tracks and a course set on an island), as well as including multiple circuits in each environment type. An updated version of the original game's Desert track was also included. The Dreamcast and PC versions of the game also included a "10-year championship" mode. The Toyota Celica GT-Four ST-205, Lancia Delta HF Integrale and the unlockable Lancia Stratos HF returned from the original game as selectable cars, along with newer Toyota and Lancia cars, as well as cars from Mitsubishi, Subaru, Fiat, Peugeot, Renault, and Ford (which is not available in the European and North American copies of the Dreamcast game).
In truth, Theres something about the SEGA Rally on Dreamcast that Ive never quite taken to. Theres something about it that rubs me up the wrong way that Ive yet to pin-point. Its been gathering dust for a while now as Ive taken to Vrally 2 and its superb port for my rally fun on Dreamcast, plus Shox on Ps2 is a damn fine arcade racer to rival it. I may have to fire up Sega Rally 2 and see if I can nail whats wrong with it 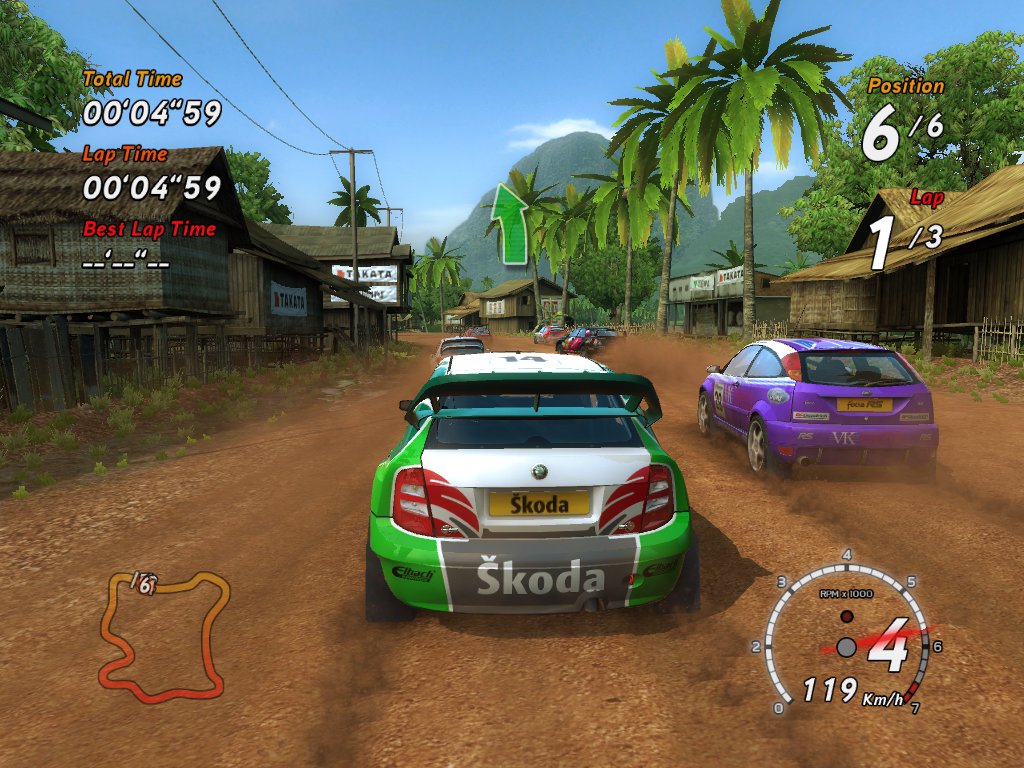 SEGA Rally (Ps3/PC/Xbox360/PsP)
There are 34 vehicles in total, which are divided into 3 groups: Premier Class (4WD cars), Modified Class (2WD & Super 2000 cars) and Master Class (mostly classic rally cars). There are also several bonus cars - such as Dakar rally types, hill climbers, buggies, etc. - in every class, which can be unlocked with points one as you progress through Championship Mode, plus an overall bonus car for getting 100% in championship mode. The (non-bonus) cars each have 3 different liveries and all have 2 setups. The setup is either off road, with better grip on loose surfaces, or tarmac, with higher top speed and more grip on hard surfaces. The different environments all feature three tracks (of which some can also be raced in reverse direction - at a different time of day) except for the bonus environment Lakeside that only has a single race track, and again are unlocked as you progress through Championship Mode
To be honest, I loved this release. Some would say the handling is a little loose, but its an arcade racer so what do you expect? Compared to previous releases it was packed with content and graphically still nice to this day. Its just a shame the AI was so brutally punishing on the game but then you could always play online instead. I'm currently keeping an eye out for it again so I can finish off my collection. There was also a Sega Rally Online Arcade released in 2011 which was basically a stripped down version of this game. Might be worth a look.

I think its safe to say that SEGA Rally is one of my favourite franchises by SEGA. There hasn't really been a release, console version of SEGA Rally 2 aside, that's let me down. The games obviously fare better in the arcades, but thankfully the experience at home wasn't diluted and rid the games of their arcade charm. Even the latest release sticks to the same philosophy of its arcade brethren. Its unfortunate that no one has any idea what is to happen to the series. Ive heard nothing concerning SEGA Rally from its parent company recently which is always a worry. My body is Reggie so Id even take an obscure arcade release right now that I had to mission for to get a playthrough. Come on SEGA, Lets see what you got.

*Used Wikipedia to add content to the post (Italic text) due to time contraints. Follow the Wikipedia link for more info on the series!
Posted by Unknown at 16:18
Email ThisBlogThis!Share to TwitterShare to FacebookShare to Pinterest