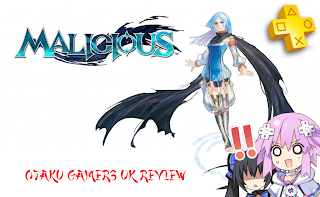 While this is a game that's not exactly new, with the 'Rebirth' version being released about a month ago on Vita I thought Id take a look at the original the remastered version is based on. With the game currently priced at £6.49 (£9.99 for the Vita remaster) a Short & sweet experience is to be anticipated. So how does it fare?
You can choose to be "male" as the gender, the vessel will assume the name Valeria, or Erica if player chooses "female". The main character of the game is a "Spirit Vessel" who is sent by the great prophets to subdue the Malicious. The meat of the story though seems to be packed into about 40 pages worth of text for you to seek out and read. All optional, of course. There's barely a cinematic on show though. I don't mind reading for a games story, I play a lot of Jrpg's that have a visual novel aspect, but in truth the story still came across a little convoluted even from this. Not one for the faint of heart. A few cutscenes explaining the story here & there would have been better for all I believe. The Malicious though is an entity that is intent on destroying the world and you have to defeat Its 5 underlings before getting a shot at the head honcho itself. As You defeat each boss you acquire more abilities which all build to give you the tools to defeat the Malicious. Its here where the first problem lies. The game has no clear indication of progression. While the idea of being able to tackle the levels in any order that the game has for its structure is a novel one, without any explanation of the boss within that level being offered makes it feel like your stepping into a dark room. The great prophet that inhabits the central hub with you offers some tips, but nothing that will help with your understanding of how to attack each boss character. While the new abilities you unlock can help with other battles, if you don't choose wisely it could cost you. For example I defeated my first boss in under 10 minutes, but then the second I took on took nearly the full 30 minute allotted time to complete as my new abilities didn't help whatsoever causing the battle to degrade into a monotonous slog fest. It must also be mentioned that upon defeating a boss, all other bosses become more powerful which again negates any indication of progress. As you've no doubt guessed, the games structure is both a blessing & a curse at the same time. Being a downloadable title means the game will not last too long, a 30 minute time limit is placed on each boss encounter, and can be finished within 2 hours by those skilled enough. A challenging trophy list and a Free Play Mode will unlock when you defeat all of the bosses, and further unlockables, like Time Attack and Score Attack modes, and even an online leaderboard are there for you once the dust has settled on your battles. The insane trophy list & unlocked content do make for a good reward. 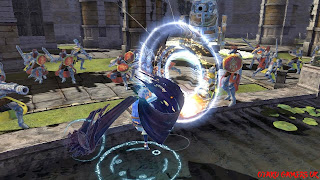 The game aims to offer a simple, focused experience. Gameplay is primarily Hack & Slash based with all levels set within a small arena fighting a boss character. The player makes use of a special black mantle that hangs from the main character's neck like a scarf called the Mantle of Cinders. The mantle, created by the great prophets, changes into a variety of forms which corresponds to a different attack type IE, the mantle can become fists for close-range melee attacks. Another attack you start with is a projectile weapon, making use of "demon bullets" to target multiple enemies with a lock on or firing a round at a time to a singular target. The mantle can also form a shield to guard against incoming attacks. As you takes damage during the battle, your characters arms and legs will disappear one by one. This acts as a health indicator of sorts as losing all limbs will result in the characters death. You can heal yourself at the cost of using "aura". By defeating the lesser enemies that serve to distract you from the goal of defeating the boss, you will gain "aura". Aura can be spent during battle to empower your attacks (A wise course of action when attacking the boss) or to restore health. Using your Aura powered attacks on the lesser enemies will help you build a combo meter which gives you bonus Aura the higher you can get it. You'll no doubt want to spend a minute or two building up a nice bank of Aura before tackling the boss to ensure healing & empowering are always at the ready. At the end of each level you are graded on your performance, defeating the boss quickly while using up no continues usually ends up being the best way to go. To be honest the mechanics for the game are solid in regards to its Hack & Slash gameplay. Its a shame then that almost every other facet of the games design does its utmost to remove as much fun as possible from the gameplay. 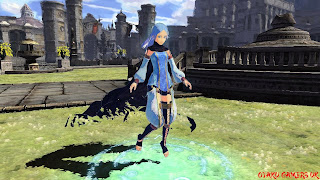 Before I begin to mention the games, at times, nice graphics I'm going to need to deal with one thing first. The games absolutely TERRIBLE camera. Malicious has a borderline broken camera, one that constantly gets stuck during combat and acts completely wonky everytime you use the lock-on feature, sapping the fun from the fight. For a Hack & Slash, there can be no greater detriment to gameplay like a camera system as bad as malicious has. The game is more tolerable if you don't use the lock-on, but then your demon bullets fly here, there and everywhere so is it a worthy trade-off? When your not struggling with the camera, the game does have a nice art style and presentation to look at. The game doesn't have any razor sharp assets, but its styled that way for a reason as it seems to give off an 'oil-painting' vibe. The stylised world it portrays is beautiful on occasion and the bright colours used on enemies & characters ensures you never lose sight of them. The boss characters, as you would expect, feature some nice design work and the SFX used for their attacks does impress. Destructible environments also suprise with how well it portrays the strength of a boss as it smashes its way through walls and structures to attack you. While for the most part the graphics impress, the framerate can on occasion suffer noticeably, dropping as low as 20 or less by my estimate. Jagged edges also make an appearance, noticeable in the levels backdrops. Its overall quite pleasing on the eye and its sound design with regards to music especially is quite good for a downloadable title. While its design may end up being a matter of taste, it intrigues enough for you to search out other tidbits of the games back story. 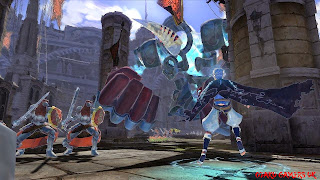 Conclusion
While the gameplays foundations are solid and the world beautifully stylised, every other facet of the games design works at making sure none of the potential is realised. The camera in particular ensures cheap deaths & frustration sap the enjoyment from what is a solid Hack & Slash title, while the lack of indicated progression and convoluted story do little to keep you engaged. Whether you stick around at the end to make the most of your plentiful rewards depends entirely upon how tolerable you are. A promising title that no doubt fails to deliver.

Footnote: I played this using the latest v1.01 patch. There is a remastered Vita version available but with how the original here has turned out, Im not sure about risking a purchase to see if any improvements have been done for a follow up review.
Posted by Unknown at 16:25
Email ThisBlogThis!Share to TwitterShare to FacebookShare to Pinterest