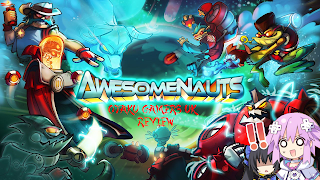 Another PSN game review comes to the fore! With talk of a Ps4 port in the works, this review could be of some relevance to my fellow Europeans who are lucky enough to be acquiring a Ps4 today. While I was going to wait it out for a bit with regards to the Ps4 Ive decided to get one ASAP as it will need covering and Im not sure if any of the other staff will be acquiring one soon. Enough about next-gen plans anyway, time to continue with today's review!
It's the year 3587, conflict spans the stars. Huge robot armies are locked in an enduring stalemate. In their bid for galactic conquest they call upon the most powerful group of mercenaries in the universe: the Awesomenauts! and with this during the intro the game kicks into a theme song that's reminiscent of Saturday morning cartoons during the 80's/90's, a theme which it never truly lets go of either. The story though, never really builds up what is mentioned. The only cinematic Ive seen for the game is at the start of the Tutorial. Still, for a game so heavily focused on its multiplayer gameplay I guess its to be expected that there isn't too much of a narrative. Once you start playing though you'll also get hit by one of the games minor annoyances, The Grind. EVERYTHING is locked away behind a level system, and while that is by no means a bad thing, when new characters and levels are also locked away in can make for a little bit of repetition when starting out. For example, Only one level is available to play (except when joining a game online) until you reach lv12. So if your planning to do a bit of offline levelling (the ranking system carries over between modes) before risking an online bout your best being prepared for the grind, it must also be said that there are only 3 maps too! Characters are unlocked more quickly though, there are 8 in total (originally 6 with Coco & Derpl being added in the v1.1 patch) and it wont take long for you to settle into a rhythm with a few of your choosing. Each character has their own abilities & attacks and can be thoroughly customised via a loadout system. Not only does levelling up unlock characters & levels, but also perks for characters too. There is a loadout slot for each of characters 3 weapons, plus an extra one for the character itself, with a possible 6 to choose from (When fully unlocked) Only 3 of these can be selected for each section at a time, so choosing wisely to suit your play style is key. Once your ready to play, its either offline practice or online bouts. Only a singular game mode is available unfortunately, but its one that will take a while to tire of. When it comes to the game feature set, without a doubt the jewel in its crown is the Couch Co-op. With the online fare being 3 vs 3, the game allows you to have your 3 man team made up of people on your console. You & two friends playing split screen can go online to fight other players, maybe even other teams doing the same as you! It really is a good feature that we don't see much of these days. Online leaderboards also make an appearance. While the ranking system is always unlocking content and a prestige system awaits those that reach the top, the lack of a decent amount of levels to battle in is a little awry. A decent variety in the roster helps keep things interesting though and the gameplay does pick up on some of the slack here. Still, Its entirely dependant on yourself how much time you'll put into this one 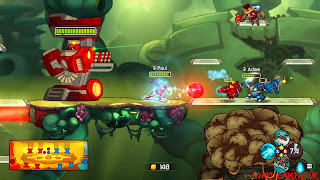 If there's one thing about Awesomenauts that is awesome, its no doubt the gameplay. It will surely keep you coming back for more as time goes on. Awesomenauts plays like a MOBA and an accessible 3-on-3 2D platformer all rolled into one. The key to victory in each level is the destruction of the other teams Solar Collector, Solar being the currency you use to purchase upgrades too. To get to the enemies collector you first have to make you way past 2 or more automated turrets. These turrets have a high amount of health and attacking a turret alone can result in heavy damage, likely death. Each team is assisted by automated droids that help keep you protected near these turrets but also can attack the players, enemy droids or collector on the other team. There are three types of droids: Buzz Droids are the cannon-fodder you'll be seeing a lot of and are automatically generated (usually in pairs) at regular intervals. Once a team destroys an enemy turret, a Super Droid will spawn at your collector that has higher health and carries a ranged, high-damage bazooka. A reward of sorts for taking down the enemies turrets. As you starting to guess no doubt, the game is more of a tactical affair than first believed. A neat teleporting feature ends up being a life saver at times, teleporting you back to your collector for healing & upgrades. Purchasing upgrades does have a noticeable impact on your character. The Solar earned for completing practically every task (and can be collected as you drop into the level in a drop pod upon spawning) is key and buying the right upgrade at the right time can turn a game on its head. Its this simple MOBA+2D Platformer gameplay married to a basic RTS style resource system (Solar can also be harvested within the levels) and an RPG style in-game ability & levelling that really keeps the player engaged. Luckily, with the v1.1 patch, most of the balancing issues that plagued the games launch have been fixed which gives the game a rounded aspect with regards to class choice. It all sounds confusing but in practice it all melds together perfectly to create a deep & fun game that is able to supersede the limitations of its content offering. 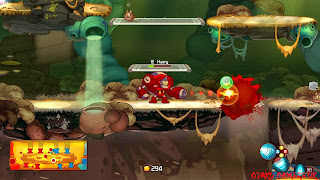 Another high point of the game comes with its style. Ive already touched upon the games Saturday morning cartoon style of yesteryear in the opening paragraph, but its here with its presentation where you'll feel that nostalgia the most. The colourful clean artwork and the charm of the heroes, each with their own theme song that ramps up when you score a killing streak, who are all clearly inspired by '80s-era cartoons give the game a unique look among similar games. The sprite work is razor sharp and each one is superbly animated ensuring the variety on show is clearly visible. The SFX are also superbly drawn in a similar fashion and the levels feature all manner of detail to draw your eye away from the action for just a moment. The game tends to move along at a steady pace, even online there doesn't appear to be much latency on show (on PSN at least) to put a dampener on things. As alluded to earlier, the soundtrack fits the rest of the game perfectly. Each character also has their own voice bank with some superb quotes that are worth a chuckle.  If theres a negative anywhere with regards to presentation, its with it’s splitscreen play, where the frame rate chugs a little when the screen gets chaotic and the screen fills with droids, laser blasts and characters. Understandable, but worth making note of all the same. Overall its very pleasing on both the eyes & ears while feeding your childhood nostalgia for cartoons. 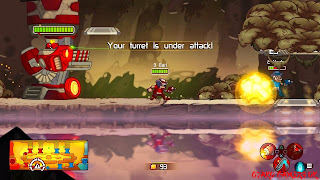 Conclusion
A superb 80's cartoon style ensures nostalgia while a rich & diverse gameplay ensures the game stays interesting for as long as possible. The lacklustre amount of content with regards to maps & repetition of the grind to unlock the content may turn off some people, those that stick around though will find enough to guarantee many hours of enjoyment can be had, online or off.

Footnote: While this review is based upon the console version, on Steam things are a little different. On PC the game is at v1.25 and features a further 7 characters with multiple skins added for all with extra levels too. While the console version doesn't have the extra content, its still very much playable

Posted by Unknown at 16:50
Email ThisBlogThis!Share to TwitterShare to FacebookShare to Pinterest