They both show the characters from Persona 3 & 4 interacting in various scenes. The battle system is shown in more detail and as I previously guessed it's a fusion between Etrian Odysessy's and Persona's. It uses the first person perspective of EO's with the All Out System and Extra Turn Weakness from Persona.

In other news Atlus released a Christmas image. Inside the A is an image of the new original character from Devil Survivor 2:Break Record. Could this be Atlus's hint at a US release of the game? Hopefully it's picked up and released over in the EU in a more timely and less broken state! 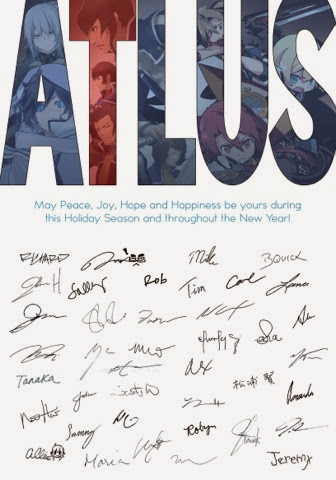 More news to come in the coming months

Andi/Nintendo Editor
Posted by Andi at 13:33
Email ThisBlogThis!Share to TwitterShare to FacebookShare to Pinterest