Today's review is a little special in a way with it being the first request for a game to be reviewed. While I had been looking into getting the game myself at some point, the request provided the added impetus to give the game a chance. My only run-in with Black Rock Shooter previously has been the anime, which I enjoyed & found to be visually striking. Let's see if the anime's sparkle has transferred to the game, or maybe the developers decided to take their own path.... 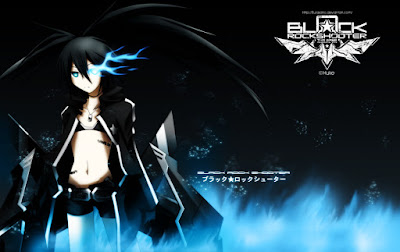 In the year 2032, Earth suddenly comes under attack from a group of aliens, turning the planet into a warzone. Nineteen years later in 2051, the last twelve humans alive awaken Black Rock Shooter to help battle against the aliens. However, there is more to BRS' existence than being a mere weapon. What follows is a fairly interesting story, acting as an origin story of sorts from what Ive been able to glean from the game, with a few twists along the way while visiting enough locations (San Francisco, New York, Moscow, Fuji Jukai, Tokyo, The MOON!) to keep things intriguing. Each location is classed as a stage and within each stage is a set of missions, usually 5 in total (6 if you include Free Run) There is some some disparity between length though. One level may only take about 10 minutes while another can take over half an hour, within the same stage too. With the game being regarded as an action-RPG, this structure isn't too surprising. It does allow for a more focused, action orientated, experience as most cinematics will also play out at the start/end of a mission. Of course it is also a double-edged sword as it means that most of the missions have a linear nature which some may not look kindly on. Straying from the usual path will often net you some loot when you come across chests. The only oddity in the games structure is the motorcycle segments during the New York stage. Its not that the section plays bad or anything, but it only happens during that stage and doesn't seem to feature again (hence why its an oddity) BRS has a novel way of unlocking stat boots & new skills. 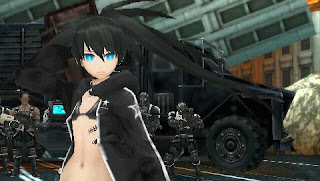 Instead of the usual 'levelling-up' that most games have, although that still happens and your health & stats improve accordingly, here a challenge system is in place. What this means is that during a stage you'll unlock challenges (kill a certain amount of enemies/reach a specific area quickly etc) that once completed gifts you with unlocks. Not all challenges are shown and most will only begin once you've met a criteria for the challenge, so finding all challenges is a must to ensure your as stocked up with Skill boost & abilities. Once a stage is completed, a 6th mission is unlocked in the form of a 'Free Run'. With this you fight from the beginning of the stage to the end, fighting the end boss to complete it. The Free Run has its own set of challenges to complete with equipment & gallery items providing the main focus of the unlocks. Some abilities can only be unlocked here too so its worth going back to the Free Run, especially to do a spot of grinding. You probably wont find yourself being forced into grinding much, if at all. The games difficulty seems finely balanced, with the usual Jrpg difficulty spikes only rearing its head once  or twice through the game. There isn't a huge variety of enemies, but colour does tend to show how powerful they are. Altogether your looking at about 15-20 hours if you do a bit of grinding too, so it doesn't become repetitive or outstay it's welcome in this regard. Completionists could be playing even longer than that. While the lack of the usual Jrpg offerings like side-quests & crafting system may put some off, the streamlined nature of the game ensures you spend most you time with the thing that the game does best - Its battle system. 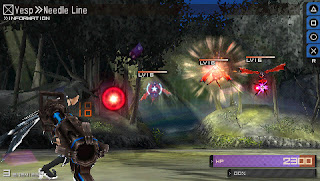 Each mission usually involves making your way from a to b, with the final mission of each stage containing a boss battle (aside from stage 6 [Moon] which has more than one boss) which would come as no surprise for those reading through the review. What may surprise you is the superb combat system. It seems to be some form of a hybrid between real-time & turn based aspects of RPG battle mechanics. Lets see if I can explain this. Battle begins when you come into contact with an enemy. During battle, Your given free reign with regards to which enemy to focus on as you direct a crosshair in the general direction of a foe before it locks on. Its when the fighting starts that you notice what makes it so good. Your attacks & the enemies appear to happen in stages/turns usually lasting a couple of seconds in real time. So for example your fighting a few hornets. They buzz around while you get a couple of volleys off (the amount of shots depends on your weapon & heat gauge) before instigating their own attacks while some enemies will move towards you or will charge up an attack within that time window. You seem to be able to defend in real time, either dodging or blocking with only whether your already attacking or not preventing you from defending. Your primary defence is your choice. Either block (reduces damage) or dodge (takes no damage but uses some heat gauge) Activating skill moves also appears to function much the same as defending (holding R opens a 4 skill menu with each assigned to a face button) so you can, if your fast enough, fire up all 4 within 1 phase of the battle. You'll need to wait for them to cool down before using again though. You've no doubt noticed Ive mentioned something called a 'Heat Gauge' a few times. This provides a little tactical flair. Firing your weapon or dodging increases the gauge. Once it passes about 40%, you fire fewer shots with even less being fired at about 80% before becoming completely immobile if you max the gauge. Obviously it cools down when your not doing anything, but blocking will freeze the cool down whilst doing so. Proper management of the gauge will often leave you victorious, failing to do so will turn most battles into a slog - using up valuable items in the process. I'm hoping this description isn't making the system sound convoluted, as it isn't. After 1 or 2 battles it will click and the multiple attack patterns of enemies (even those of the same model) keeps everything interesting. Its set up in such a way that it always feels like your own fault if you lose. 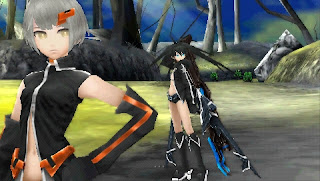 Graphically, well we are looking at a PsP game after all so Ive got to keep that in mind, It actually doesn't look too bad. While the first 2 stages based in New York & San Francisco may start to gnaw with repetitiveness, its later levels show some nice design and detailed graphics. The 'God rays' during the forest parts of Fuji Jukai & reflective ice of Moscow do much to impress for what is weak hardware these days. A solid framerate is maintained at all times and the sharp image (on my PsPgo at least) ensures aliasing is kept as low as possible. Its not all good though unfortunately. Character models could have been a little more detailed and even though there is some nice texturing, theres also some garish parts too. In truth, the game appears to improve, or even mature, as the game goes on with regards to its graphical design. Yes, its the end of the world so things are broken and drab but once you start entering the alien domain its design gets more interesting. I'm glad NISa saw the need to just provide us with subtitles and keep the Japanese voice track intact. It always helps for me to enjoy a game like this when the native language remains (although some more effort into the lip-syncing would've been nice) The rest of the sound design seems about serviceable, Nothing really stands out aside from the weapon sounds which makes BRS weapons sound like the cannons they look like. The game isn't going to win any awards, but then the technical side of it doesn't hamper the game in any way either. 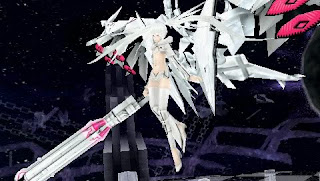 With the game lacking some of the features found in most RPG games these days, while also going for a streamlined and action orientated structure, No doubt some people will be turned away before even trying the game. For those that do try, You'll be rewarded with a superb battle system & a novel challenge based unlock system while the story & graphics will keep improving to ensure you stick around. While its not going to set the PsP RPG scene alight, Its a true dark horse in every sense of the expression.