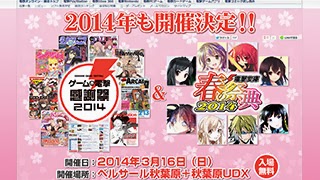 Gust’s latest release in its alchemist RPG series, Atelier Escha & Logy: Alchemists of the Dusk Sky, has been available in the EU for the past week and has just seen a release today in the US. From the rumblings & teasing over at Dengeki though, it seems like a new game in the 'Dusk' series will be announced soon.

An event, named Dengeki Game Festival 2014, will be taking place on March 16th in Akihabara, Tokyo and its here where new information on this teased entry in the series may be making an appearence.
Posted by Unknown at 15:56
Email ThisBlogThis!Share to TwitterShare to FacebookShare to Pinterest