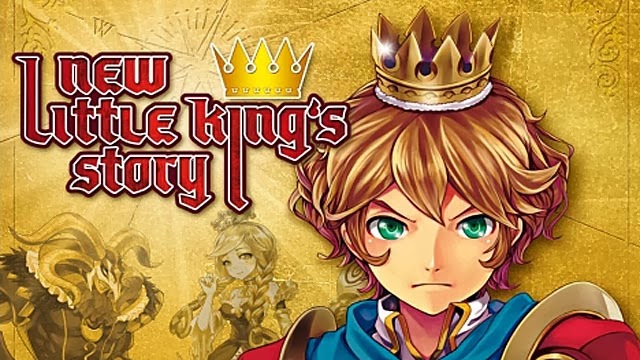 
New Little King Story is a re-imagining of the Wii title Little King Story.  The game just did not improve graphics and game play but introduced an entire new story.  You take the role of King Corobo, who task is to reclaim his kingdom from the Devil King, “The Nightmare”.  Not only has the Devil King taken your kingdom from you, he has also stolen seven princess and placed them in seven different kingdoms.  To make it even more challenging, the princesses are guarded by dark lords whom you have to defeat to grant their freedom.

As King, you have full control over your subjects and you can use their various skills to build yourself a strong, efficient Royal Guard.  With this Guard you can battle enemies, build structures, clear obstacles and farm for resources.   This is achieved through the games simple job system.  Each citizen starts out as a carefree adult and then you can assign them to a specific job.  Early in the game you only have access to limited job types (there are many jobs by the end), which can be a little frustrating as you can have access to pretty much the entire map but there will be obstacles which only a certain job type can get past.  An example of this is early in the game the first main obstacle are large logs which can only be removed by Carpenters – which require a large amount of cash to purchase. 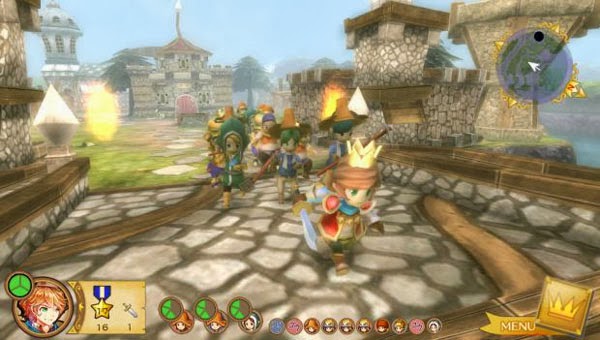 The style of game play is similar to that if Pikmin. You create a Royal Guard, who is built up of different citizens who have different skills, and then you "throw" them at the task. If they can carry out the task, they will. If not they will return to you. It is a micro-management game and this can easily put many players off.  You have to control your Guard efficiently and the only way of doing this is by knowing what all the jobs strengths and weaknesses are. Very simple formula but due to this tight management the pacing of the game in the early hours is rather slow. This is due to only having a small capacity for your Royal Guard. You will find yourself a distance from your home kingdom only to find an obstacle in which you need job type which your either don't currently have in your guard or have no access to in the first place. There was many times during play this happened and it can be very off putting. You may find yourself putting the game down all together and forgetting about it for a few months. And when you do come back to it, forgetting why you stopped playing it, it all comes flooding back why you stopped originally.  But, this does improve during the game as the capacity increases to a very generous number.
What doesn't help is the story, or the lack of it. You get introduced to the main plot at the start and reminded of your quest each time you save a princess/kingdom. So you could go for hours without any plot points, maybe thinking to yourself what is it all for?

But, let's put that to the side because once you start unlocking more job types and your capacity increases, you will find yourself submerged into a very enjoyable micro management style game. You will find yourself setting daily goals, which are perfect due to it being on a portable system. Building an efficient guard will become second nature, you will except that you are not undefeatable and that will need to return to your home kingdom each day to rebuild strength. Remember, Rome was not built in a day. 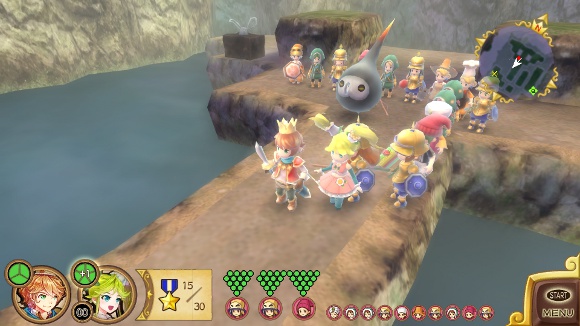 For such a simple idea for a game, the controls are a major flaw with this game.  For the majority of the game you are running around an open world assigning your Guard to complete tasks for you.  To carry this out, you aim at the target and “throw” your Guard.  The flaw is the aiming.  You will find yourself throwing the guard at the completely wrong thing. Touch screen serves the same purpose as the aiming and it is OK but can get in the way with bigger fights as you find yourself crossing yourself to switch between the face buttons & the screen.

Organising of the guard is frustrating at time especially when you have many job types in there.  By pressing Triangle you can change the order of your Guard.  Doing this you can move your required job to the front of your Guard and then set them upon their task.  When you are casually moving across the kingdoms this is a very easy process, but during the heat of a battle it can become frustrating and you may find yourself losing some of your Guard due to this.

This epic quest of conquest and heroism will see you fight epic battles against various enemies spread over cast lands. The main story line alone will set you back about 20 hours but to get the most out of it expect at least 50 hours. After completing the some what weak story line, you will either decide to put it down and never return to it or continue on, thus getting the most out of this game. This is where all you skills learnt come into play fully.
There are encyclopedia which need filling with all enemy encounters (some which are very tough and require some tactical thinking), items and even animal abducted by UFOs!  Yes this is true. You can spend time with each Princess to raise their affection level so you can live happily ever happy with then. This is completed by spending a lot time with them. This can be done with all rescued princesses but you can only have one around you at a one and if you leave them alone too long, the affection drops. Many tedious hours await ahead of you!

New Little King Story may leave the player feeling lost early on but if they are persistence they will find a game with brilliant gameplay with a sophisticated job system.
A great improvement on the original Wii title that is perfect for the PS Vita, but sufferers from some strange control choices and an unimaginative story.

Posted by Unknown at 14:04
Email ThisBlogThis!Share to TwitterShare to FacebookShare to Pinterest