Want to shoot up some Psycho's on the go?  Well now you can!  Borderlands 2 is now available on the PS Vita. With over 80 hours of gameplay, your Vita won't catch a break.
Squeezing such a massive game onto a 4gb cartridge on a handheld system is no easy feat, and Iron Galaxy did just that.  Though there are glitches and performance issues that do arise, the Borderlands 2 Vita port is a very solid port.  I'll get more into depth on those issues in the review.
The Vita port also comes packed with most of the DLC, though the DLC is not on the cartridge, it is available for download for free in the PSN store.  Now onto the review minion! 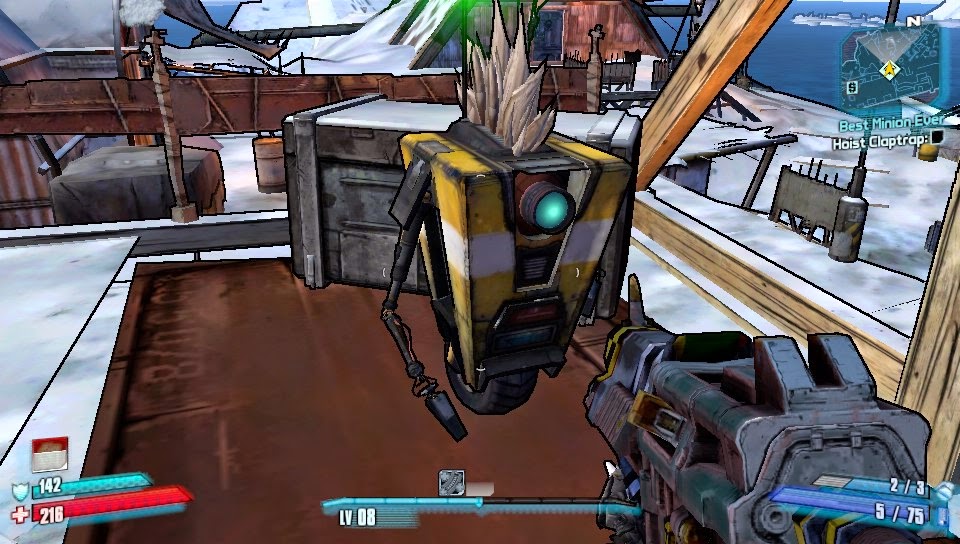 Borderlands 2 takes place 5 years after the events of the first Borderlands game, since then a invaluable rare element called Eridium has started to appear around the wasteland of Pandora. This rare element is secured and exploited by the antagonist of the game, Handsome Jack.  Jack controls Pandora and claims to be there to bring order and peace upon Pandora but he really is in search of a vault that is bigger than the vault from the first Borderlands game.  As news started to spread about the possibility of another vault, Vault Hunters started to appear to try to get to the riches before Jack and his army does.  Our four new playable Vault Hunters are Salvador, Mayra, Zero and Axton.  Gaige and Kreig are DLC characters that are already included with the Vita version of the game.

The intro starts off with our new Vault Hunters on a train ride to the heart of Pandora, their transport gets assaulted by Jack's men and robots.  The train blows up and whichever Vault Hunter you chose ends up on a glacier, and on that glacier you meet Claptrap once again! You're then tasked with finding a way off the glacier and shooting your way off back to Pandora's mainland.
I also cannot stress enough that Borderlands 2 is very fun in the sense that it does not take itself very seriously.  Character voiceover lines are hilarious and the character designs are just as hilarious.  Some dialogue can be very stupid but that adds to the atmosphere in Borderlands 2, crazy.  Very few games can get away with these levels of insanity in it's dialogue and character design, which is a huge plus for anyone looking for a game that drifts away from the typical serious gritty military shooter games. 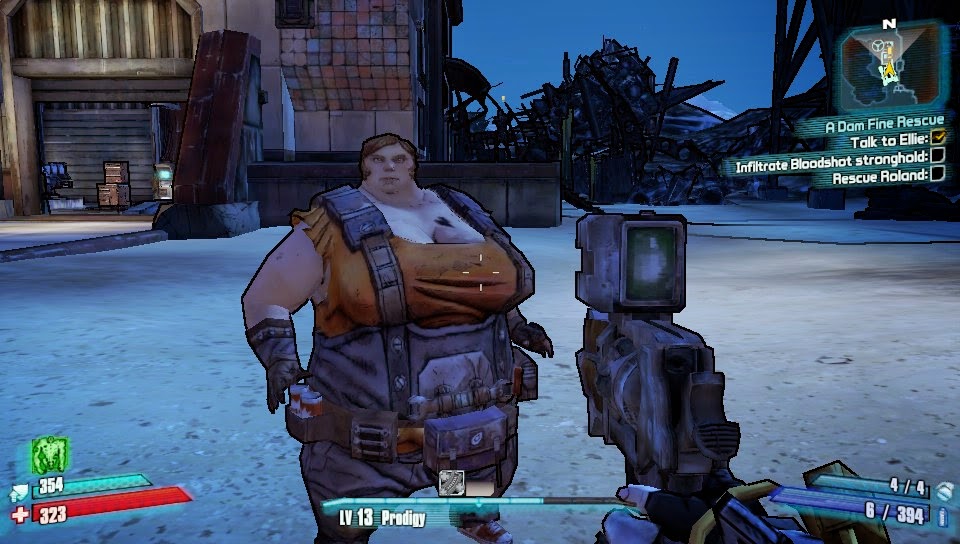 The game play mechanics are basically the same as the first Borderlands game.  There are hundreds of different guns that can be found and each have different effects.  Each weapon has a unique manufacturer, and every manufacturers weapons have different effects. Some weapons have elemental effects such as shock and another weapon might be thrown when reloading for an explosive effect.  Different effects cater to a players style of playing, a fast paced player might prefer pistols with burst effects than a pistol with sniping elements.  Borderlands 2 really takes care of all players with different play styles. 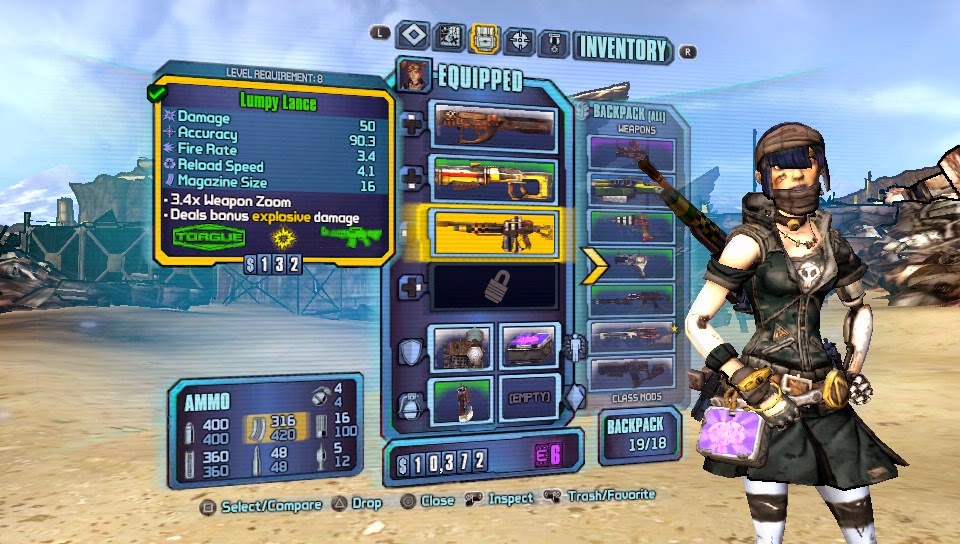 There are six different classes that each have their play style.  The classes offered are the Commando, Siren, Assassin, Gunzerker, Mechromancer, and Psycho. Each also have their own special ability that can be activated. The Mechromancer for example can summon a robot called the Deathtrap the brings destruction to the players enemies, the Deathtrap is easily the best skill in the game.  The Gunzerker on the other has a skill called Gunzerking, once this skill is activated the players health is instantly regenerated by half of their max health.  For Strategic players I would recommend the Siren, Assassin and Mechromancer classes, the Mechromancer being my personal favorite. For players that like to go out with a bang, I recommend using the Commando, Gunzerker and Psycho classes.  Let's move on to explain a skill tree that is introduced in Borderlands 2.
Gaining exp to expand your skill tree is still the standard but now there is a second optional skill tree that can be toggled off and on. This is called the Badass Rank skill tree, as the players badass rank is increased you are given tokens that the player can spend. Your badass rank increases when you finish challenges that are available for completion such as, 'Kill 10 Psycho Midgets with an explosive shotgun'. The tokens are available to spend on perks that increase the players overall stats in game, this however, as I said before can be toggled off.  Some hardcore players will be turned off by the fact that having the badass perks turned can make the game easer as the perks are stacked.  This is a very nice feature for casual and hardcore gamers. 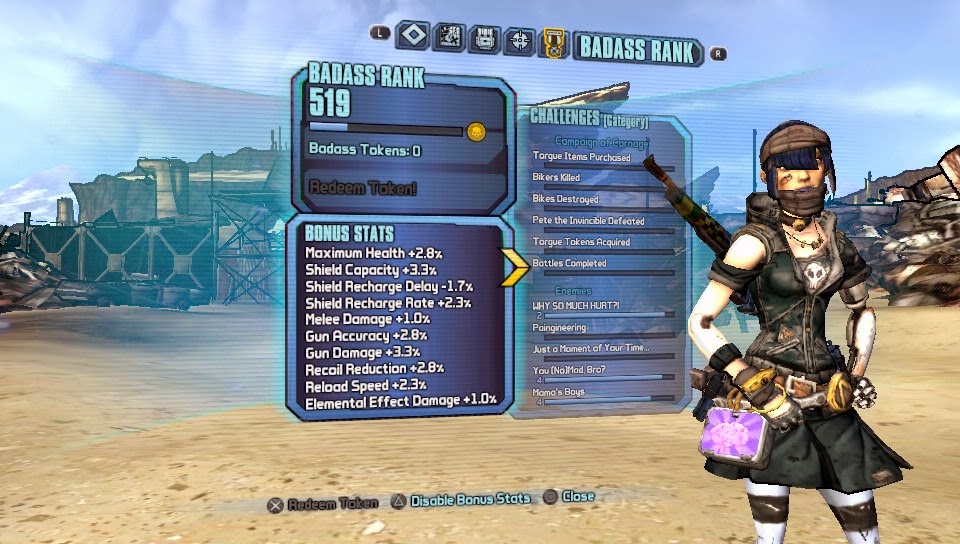 The controls that have been shaken up to accommodate the Vita's lack of buttons have been setup very nicely. The touch controls feel very natural and are positioned on the screen and back touch pad so that you don't unintentionally tap on any unwanted action.  Here is the control scheme,
You can also aim using the gyro scope that is built in on the Vita just in case you find the Vita's sticks to be uncomfortable  in any way.  The gyro scope works really well and I recommend it to anyone who really likes using weapons with scopes as it helps a ton when trying to go for precision kills. 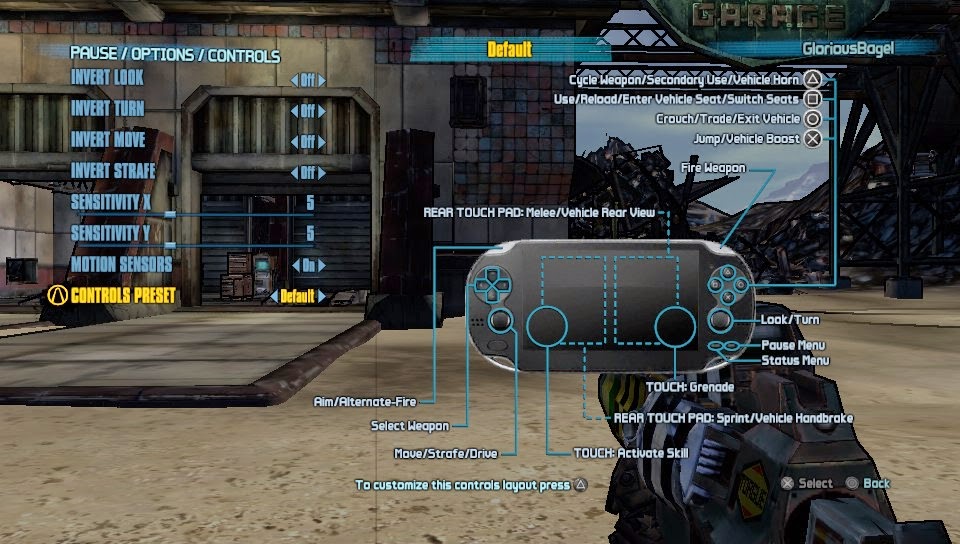 Overall Iron Galaxy did an amazing job of fitting such a huge game onto a handheld and for that the really deserve kudos.  Visually the game is astonishing for a handheld game.   My gripe is that the Borderlands 2 feels like a rushed port, there are times where the frame rate jumps around the 50fps range then it will suddenly drop to around 10-20fps which really is an annoyance even if there is no action going on.  I also ran into a couple or graphical glitches that made the game crash, I lost any progress I had made during that play session and that really stings.  The good news is that Sony and Iron Galaxy are working on a patch to improve the games performance. Source : Sony Employee tweet.


Who should buy this?

Who should avoid this?

Borderlands 2 on Vita is overall a great port that should be on anyone's to play list.  Borderlands 2 also flexes the Vita's muscle and shows off what the handheld is capable of.  If you're looking for a game that will give you dozens of hours of gameplay and mindless shooting fun, then Borderlands 2 is right for you.  I give Borderlands 2 a score of..

Posted by Unknown at 20:01
Email ThisBlogThis!Share to TwitterShare to FacebookShare to Pinterest