Last year Acquire released the second game in the Akiba's Trip series and the first to be localised outside of Japan, naturally it's nature caused a little controversy but people who ignored that & took a chance on the game were greeted with one of the better titles of last year. It's 2015 now and the game has been released and re"vamped" (not even sorry) for the Playstation 4, How does it compare and are the improvements worth it?, Read on. 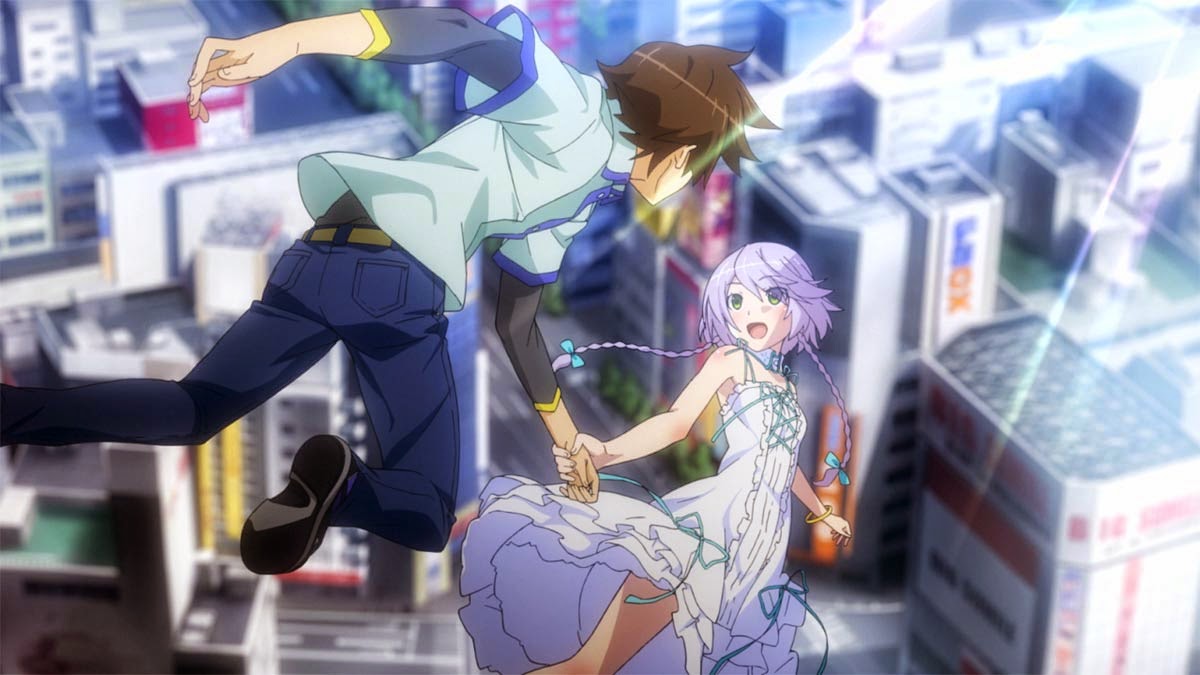 First off I have to point out my original review was based on the PsVita version of the game so this is a bigger jump than someone coming from the Ps3 version of the game. Visually it's had a decent upgrade, everything is more defined and has better lighting, this really shows off Akiba's visual style which has it's unique quirks that i'm sad to say weren't as apparent on the previous version.

The overall frame rate is alot more solid than that of the Vita version, infact during my playthrough I don't think I ever came across any frame rate drops. Animations aswell have seen an upgrade and seem more fluid, this for me was a massive improvement because throughout my time with the original the animations really bugged me.

I do have to point out the amount of loading hasn't changed for this upgrade, it's 10 times faster than it was on the Vita making the game flow quicker but it can be annoying when the game seems to load every 10 steps when you want to go into a new area.

The game comes with all of the DLC so there is a tonne of new clothes for you to play dress up with, also included is a PS4 exclusive "Toy Box" mode. This is for people who have completed the game and just want to mess around with the setting and game to tweak it to how you want it. It's a brilliant addition and you can sink hours just into this mode alone! permitting you don't bother with Trophies that is!.

Overall this is the best version of Akiba's Trip, I wouldn't say it's fully with the price tag if you are upgrading though, bar the DLC & Toybox there isn't many new features so i'd recommend this for newcomers or people who only have a Ps4 now. My general feelings about the game haven't changed so below is my original review.


Set in the colourful and modern area of Japan Akihabara known around the world for it's shopping you take control of Nanashi in the fight against daylight vampires!.
Given the name Synthisters they are currently populating Akihabara's streets and praying on lone Otaku to drain them of life force, a chance encounter changes you into a Synthister but with the drive and passion to stop them!, how do you stop them I hear you ask? direct sunlight.
Following so far? here is where it goes a little strange, direct sunlight kills Synthisters but only if it hits the skin directly, best way to do this? strip them to their underwear!. That's right your touring the streets fighting "Vampires" to get their clothes off and burn them alive! 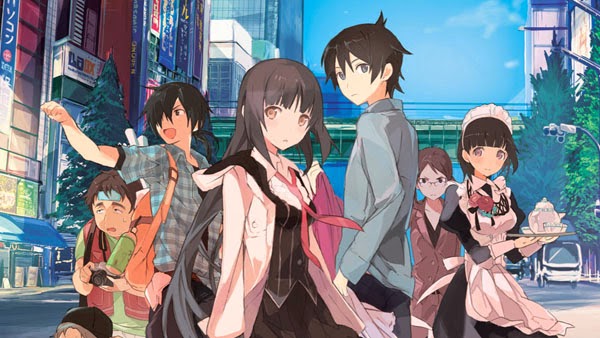 The story is your standard anime, teen, vampire affair, it's well written enough to keep you interested with the standout character being your sisters and the affectionate ways she calls you bro, my personal favourites have been Brotagonist and Brotato!. It's not the strongest story but I honestly wouldn't say the main arc is the focus, the characters you meet from an aspiring #1 maid, self proclaimed ladies man, Pops the old man who runs your local haunt and infact all the Freedom Fighters have nice quirks which really create some memorable scenes.

I'm going to tackle this stripping aspect now, as you can imagine the media has had a field day with this title! i'v seen it described as a rape simulator and variants on that & if i'm perfectly honest it's far from it. Yes you strip people but they run off once it's happened, you get less EXP & money for attacking "Norms" unless it's story, it's rarely sexualized & when it is it's with whoever you choose to go for romantically. Throughout my gameplay it's not a far cry to say i'v also stripped more Males than Females for those saying you just go around stripping females, this isn't a choice it just seems to have landed that way.
I'm not huge on "fan service" and to be honest I was very apprehensive when this title arrived, since playing it I can say it's one of the lightest games in terms of fan service I have played in a good while and haven't once found it to be an issue. 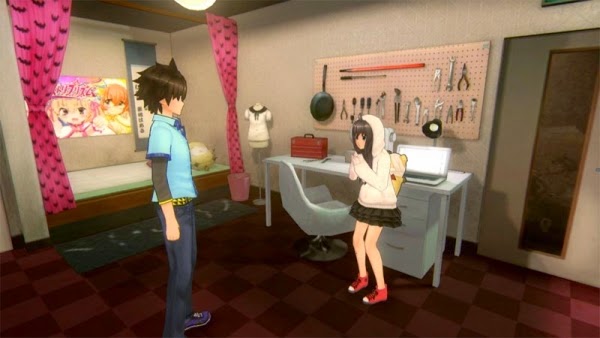 Nice features also include amusing and sometimes questionable e-mails that you get throughout the game and my personal favoruite Pitter. Think Akiba Twitter where you'll find out the latest goings on & sometimes even hear about your exploits in a comical and embarrassing manor!

The setting of the game is the real star here, a fully recreated explorable Japanese shopping district not that dissimilar from The World Ends With You. Depending on how much you enjoy Japanese culture will affect your mileage with this, myself I love it and it's very reminiscent of Ryu Ga Gotoku & Kenka Bancho in terms of aesthetics.

The city is broken up into several areas either accessible by foot or via world map Fast Travel. All are incredibly detailed but could stand to be expanded a little more. Also the backgrounds bar the FMVs playing on the screens seem a little stagnant and could of done with a little more interactivity to immerse you further.

Graphically it uses Cel Shading which works brilliantly for this type of game, with a lot of anime/video game references it all just seems to fit in with the vibe of the city and the characters you are interacting with.
A nice little touch I liked was every loading screen was an advert for anime/shopping/games and all were real, I came across a Disagea 4 advert playing in a bar, Mind Zero being advertised all over the place & even Conception II was advertised to me on the loading screen, a nice little touch. 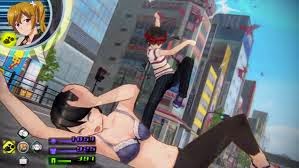 In this version I have noticed minor framerate issues & at one point the game was freezing for a second before & after fights, I tried again before this review and it seemed to have stopped the freezing but I feel I have to make that point anyway for any potential buyers.

Gameplay now! this is the reason my Vita has been without charge for over a week!. The best way to  describe this game is like a 3D action adventure beat em up, think Yakuza/Ryu Ga Gotoku, Urban Reign, Beatdown, Kenka Bancho those kind of games.
Before you strip your opponent you need to make sure the item of clothes you are attacking are weak enough, you do this by the old fashioned way, physical violence.
You'll be spending your time prowling the streets fighting Vampires with countless weapons such as Baseball Bats, Boxing Gloves, Laptops or your bare fists.
The fighting system at times seems a little off but you'll soon figure it out, it's based on timing rather than knowing the insta-win combos, the lock on is a little strange and could be addressed but it never gave me any major problems and often helped in larger fights.
There are stores to visit to buy new stronger clothing, weapons, meals or items, a plethora of side quests to attempt to help bring the dosh and EXP, even a battle arena you can visit to polish your skills.

The MC is incredibly customizeable from this head down to his very fighting style you can change it all, be it through items you have bought, won in battle or been awarded, you'll spend a lot of time tweaking your character to suit and reflect your needs (Mine is dressed and acts like a Yakuza).
You can also change certain aspects of your partners once you have got enough affection from them so that means you'll be customizing them aswell! You can even customize your phone wall paper with key points from the story (& yes the fan service), 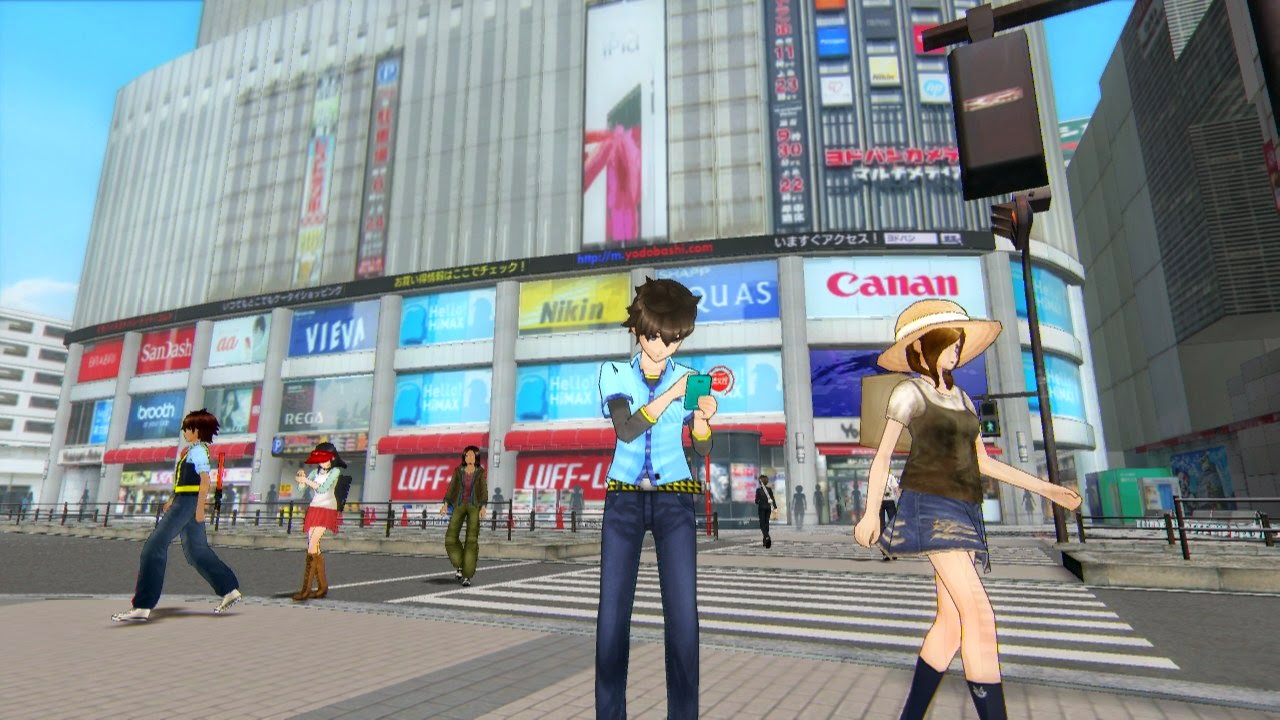 Anyone who has been visiting this blog for sometime will know I'm a sucker for the above mentioned titles and it was a pleasent surprise to find out that this played alot like Kenka Bancho/Ryu Ga Gotoku, with an anime/fan service twist.  These games always give bang for your buck and Akiba is no exception, with a fun twist on the genre and well written characters it is one title I can 100% say exceeded my expectations.
I have laughed with this game and become so addicted to owning everything and being the best fighter I can, with multiple endings this game can easily last you 50 plus hours and even then you'll stumble on things to find and do!. The questionable material will be off putting for some people which is a shame and the issues I had with the Vita version do knock it down somewhat but it's a brilliant debut for the series in the west & I look forward to word on the PS4 version and hopefully a sequel further down the road. 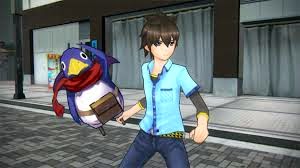 Posted by Andi at 10:26
Email ThisBlogThis!Share to TwitterShare to FacebookShare to Pinterest