The latest release from ACE Team, Published by Atlus, seems to be their most ambitious. Mixing in elements of numerous genres - rougelike, brawler, RPG & platforming, to create something that should entice fans of those game types. So does Abyss Odyssey succeed where many games have failed? Or does it trip & stumble is way to the bottom of the abyss? Lets take a look. 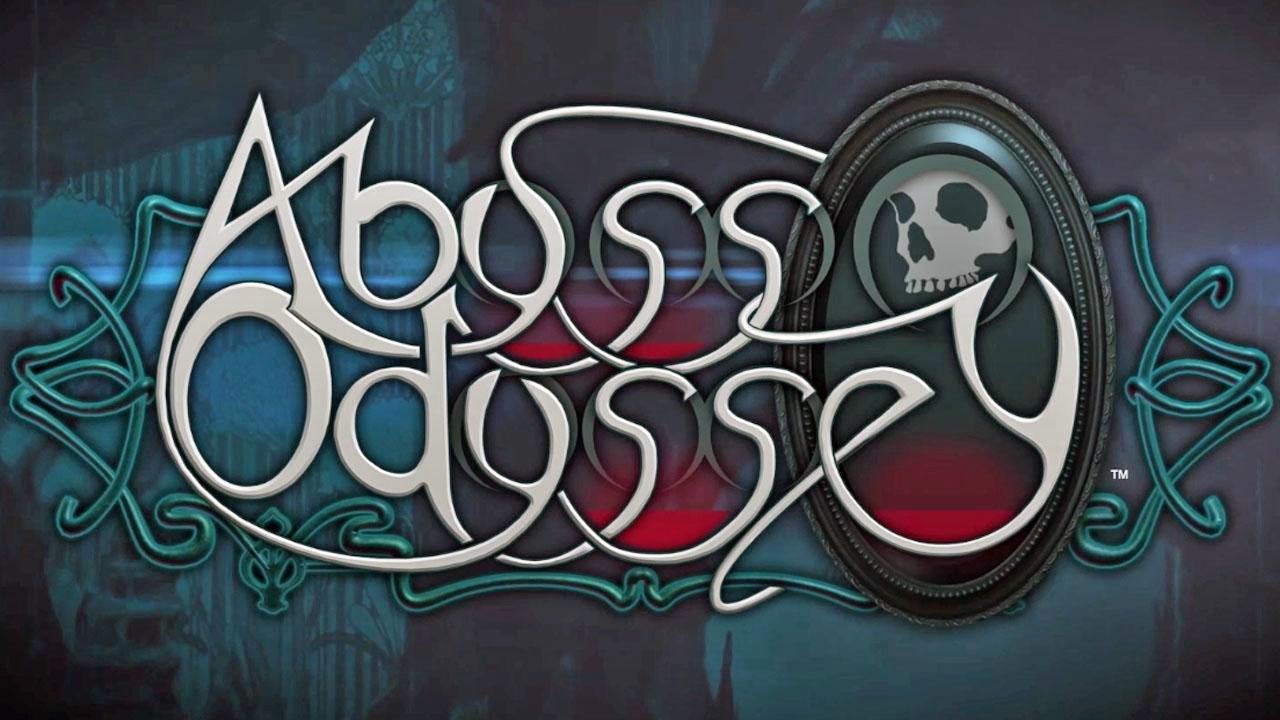 The games story focuses on a Warlock that's sleeping at the bottom of an abyss, and his dreams seem to effect reality outside of the abyss. Soldiers stationed outside of the hole routinely venture inside, but never return. Enter our heroes, who all seem to be part of the Warlock's dream so are better equipped to tackle the Abyss and put an end to the crisis. That's about it. The game doesn't really explain much more beyond that, leaving you to piece together the rest by collecting journal pages from fallen foes. This lack of explanation also extends to the game, so its best to treat your first run through the Abyss as your 'tutorial' as the difficulty curve can seem steep. Thankfully the games mechanics are simple enough, as the game is a little simpler than expected (the term 'roguelike platforming brawler makes things sound more complex than they are) The games rouguelike elements come into play as you enter the Abyss. Levelling up your character allows you to unlock skill points every few levels to boost stats as well as unlocking more moves the further you progress. The abyss is also home to crates & treasure chests, the chests usually require keys that can be obtained from foes, that will lavish you with gold. These carry over to your next run if you die. If you do fall, your given the chance to revive yourself as your switched to a normal soldier and have to fight your way to an altar. 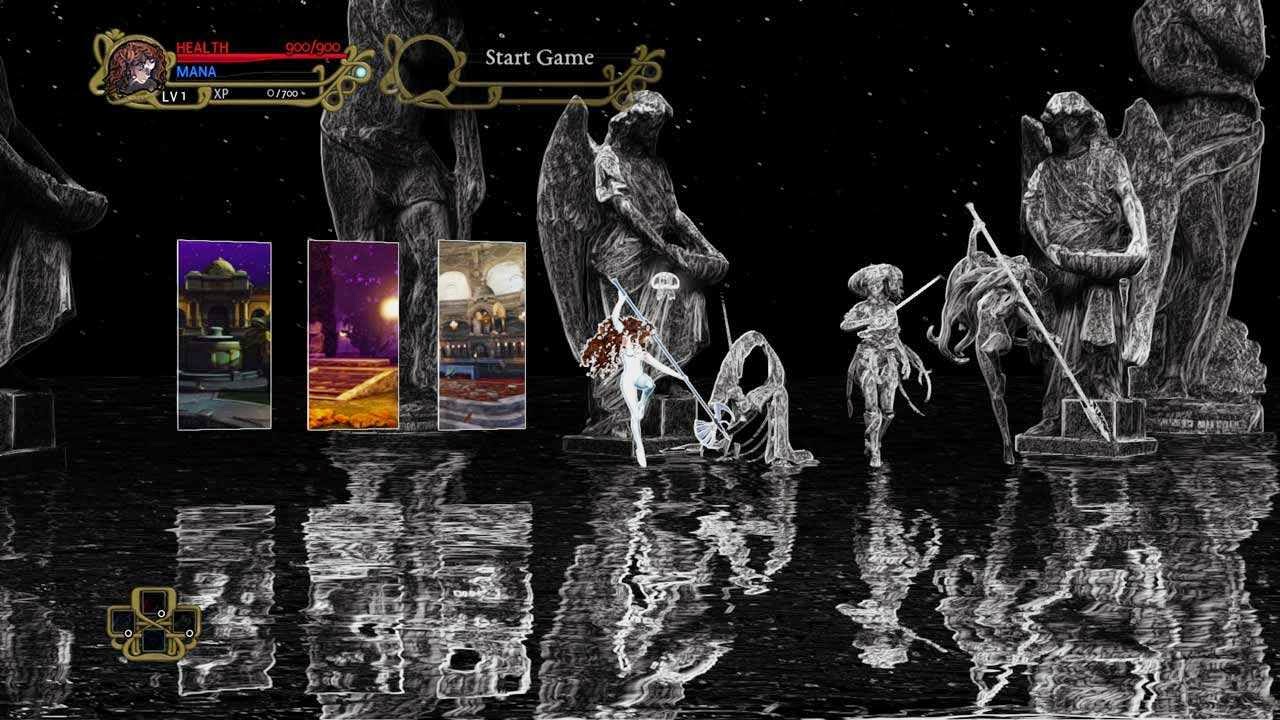 The altar's are also a place where you can usually buy weapons, or find one there sometimes, whilst buying a checkpoint token will allow you to respawn there if your soldier falls before reviving you. The weapons and items sold by the shopkeeper here can usually be expensive for the best ones requiring multiple runs to get the funds, luckily less expensive ones can carry an effect (Poison, Fire, Charm, Ice etc) which can be obtained at a decent price that will do a good job. Memorising altar, shop, weapon etc placements wont be of use on this game as the Abyss is Procedurally generated each time you start a run. You'll never play the same run twice, although the backgrounds don't change which can me things feel a little samey within the same area. There are also 3 different  entrances to the abyss to be unlocked that offers you the chance to start further down, but at higher difficulties due to each floor carrying a difficulty. The constantly shifting dungeon & roguelike elements will keep you returning for a while, as your first few runs may end in failure anyway due to the games numerous mini-bosses that appear as you progress further down. These bouts can be tough until you hit a decent level & are carrying a weapon that carries a little clout. You may also find that once you've unlocked the other characters that their fighting style more suits your own. The Ghost Monk has a 2-handed sword & their combat is focused around slow attacks that deal a lot of damage, whilst Pincoya carries a spear that offers up the bonus of extended reach. Theres enough content with the game to keep you coming back, even when your powerful enough to be tackling & defeating the warlock within an hour, as long as its gameplay quirks aren't enough to make you give up beforehand.. 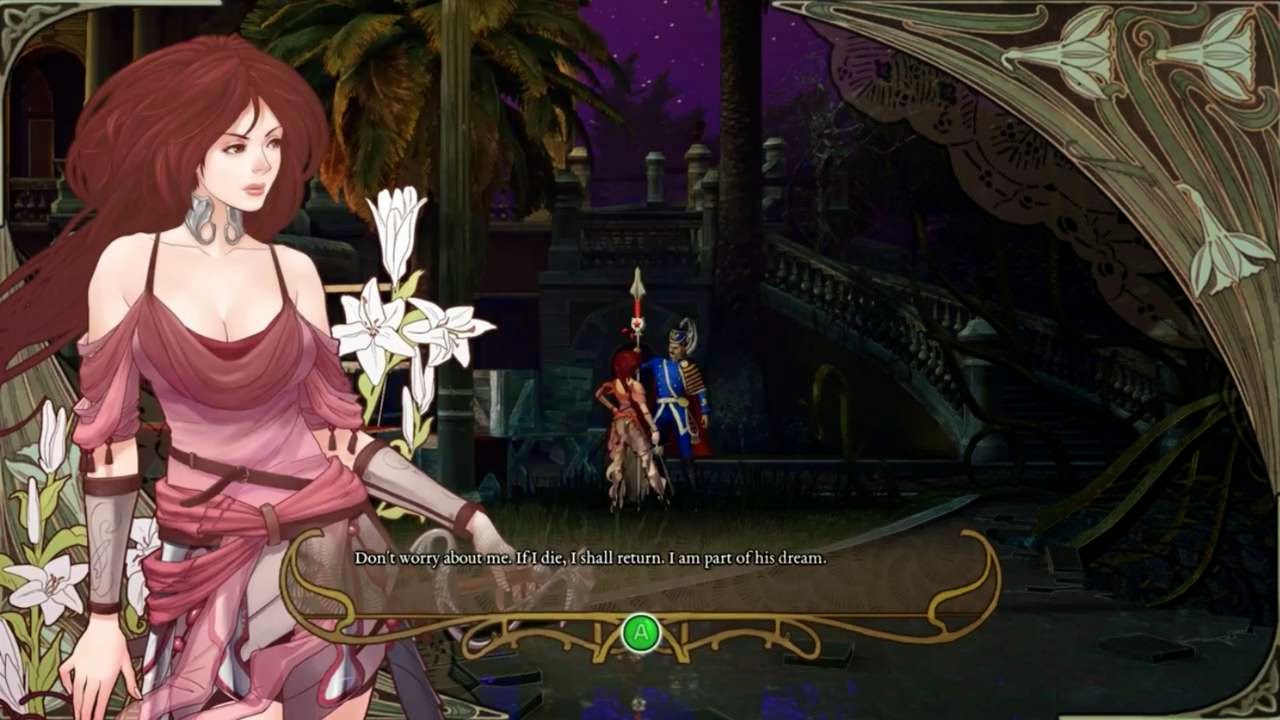 Now lets talk gameplay. As you may already be aware, the game is of the side scrolling variety. The aim of the game is to make it to the bottom of the Aybyss by defeating foes & finding the entrance down to the next floor of the procedurally generated dungeons. Combat is of the slow-paced, tactical variety, which is all the more apparent when you reach an entrance to the next floor that's guarded by a boss type character. You can hack & slash away if you want to, but you want get very far as the enemies toughen up. The combat system as whole though, is a mixed bag. At its best it can be fairly engaging as you dodge & counter blows while pressing attacks, but at its worse it can be downright frustrating. Most of the issues seem to stem from the games hit-detection. At times, enough to be of notice, the hit detection will go AWOL as your swings seemingly pass through foes without dealing any damage. There are also moments when an enemies weapon will amazingly strike you from beyond its form or just completely bypass your block altogether to land a blow. Its most noticeable when playing as Katrien, as her short sword and fast attack style means there's more of a chance it'll happen. The other two characters, one a Ghost monk & the other an ethereal warrioress named Pincoya, don't seem as privy to these issues as they offer up different combat sets that make it harder to spot. Enemy AI is also irritating at times too as they've clearly been programmed to play on exactly what it is you are doing, usually rolling behind you to get cheap shots in your back as you wrestle the cumbersome controls to turn around, being a regular occurrence. The games platforming aspect isn't safe from issues either as it comes across a little clunky. On the rare occasion I have fallen through a platform, but that has only happened a few times so its not too bad compared to the hit detection. Instead its the falling back through platforms when trying to jump onto them & the wall slides when your character should be grasping ledges that makes things less slick than they should be. Thats the main problem with the game. In trying to meld a few styles together, its meant each area has an aspect of it that seems underdeveloped. There are good aspects & ideas of course, collecting the souls of foes and changing to their form to offer up fresh ways to play, but when the base gameplay is as cumbersome and lacking polish as it is - its hard to gloss over. 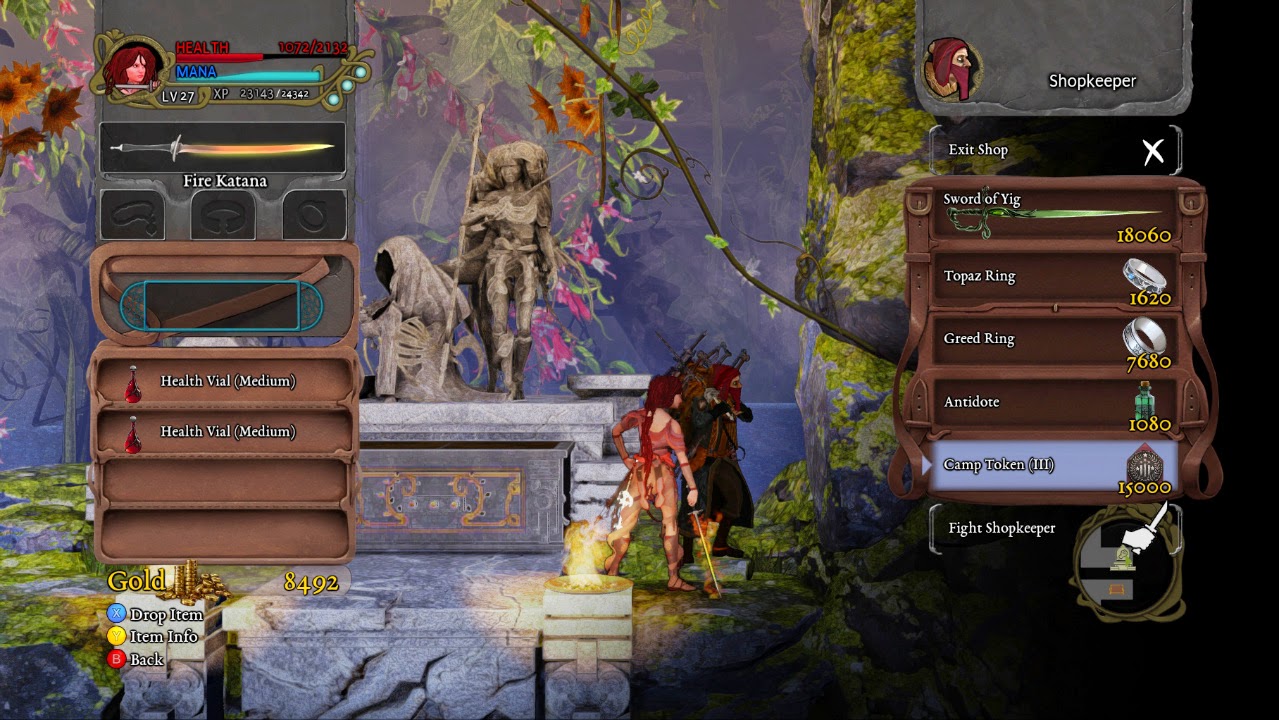 Graphically, the game is pleasing though - As you would expect from a studio with an artistic floursish. The games 2D sprites that pop up during conversations are wonderfully styled, packed with detail and colour. They are not animated at all though, but its not too much of an issue as the game doesn't focus on storytelling much. The games areas are well detailed, and the change in areas brings with it a change of scenery as the games texture quality seems to improve the further into the abyss you get too. Moving to the floral section after the opening is a real eye-opener as its lush detail is at odds with the intro that seems a little bland. Characters & enemies are also well modelled, with unique stylings & animation sets meaning encounters don't suffer from repetition quickly. Unfortunately, the games lack of polish also extends to its technical aspects regarding framerate. Sure theres the odd drop here & there, but that's not too bad, as its the judder that will effect your enjoyment the most. After a few minutes of entering the Abyss, the game will start to judder. every. few. seconds. on. the. dot. till. the. end. of. your. run. When you consider it takes up to an hour to reach the bottom, it doesn't take long to become a nuisance. Whether a patch will come to fix this glaring issue is anyone's guess, but if your sensitive to framerate issues - this one comes with a warning. Luckily the games audio doesn't seem to suffer from a lack of polish like other areas of the game. Characters are voiced well and the sound effects are well defined in the soundscape. Notable tracks within the games music department also help to ease some of the games technical woes, but in no way does it do away with the games framerate issues as that judder will be ingrained in your memory for the days to come. 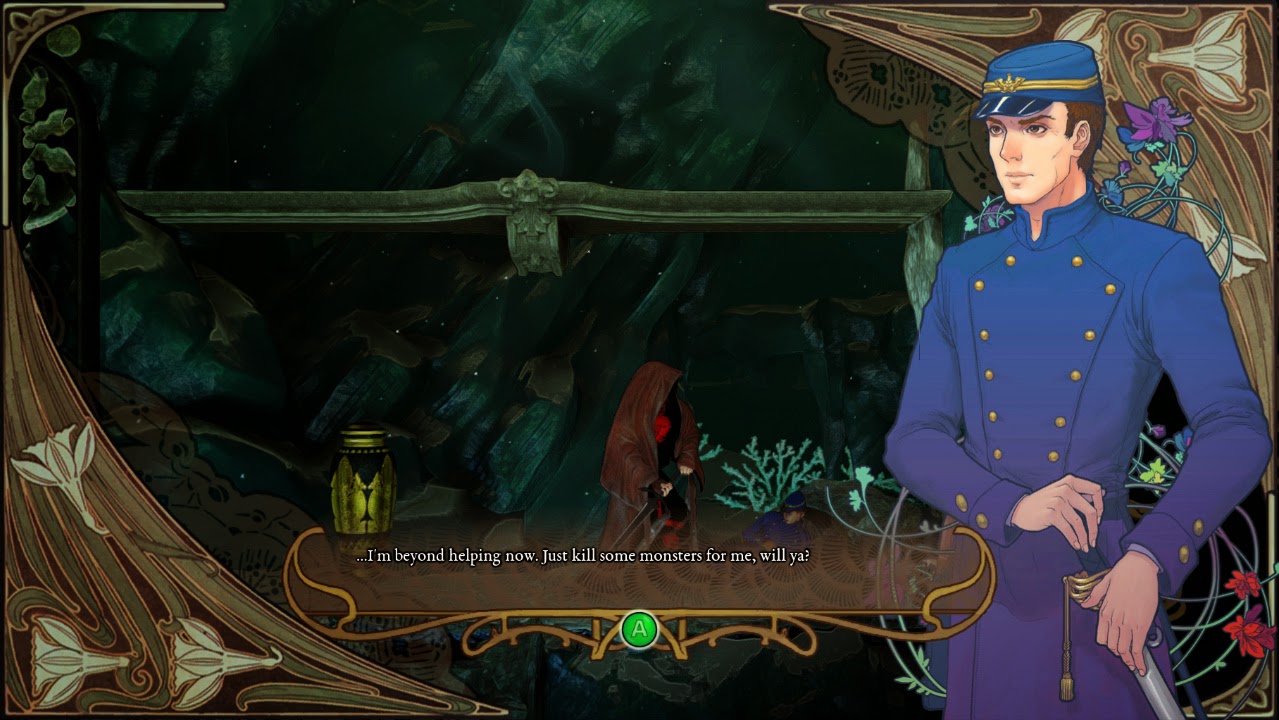 On paper, Abyss Odyssey sounds like an intriguing prospect as it melds notable genre's. Unfortunately, the games overall lack of polish hurts the overall package. Combat is cumbersome as hit detection decides to go on holiday, Platforming never feels as slick as you would expect & the games clockwork framerate judder will test your patience. Its not all bad, the games roguelike elements are executed well & the games audio is decent, but its a difficult game to recommend based on the Xbox 360 version played.

Posted by Unknown at 21:39
Email ThisBlogThis!Share to TwitterShare to FacebookShare to Pinterest