Due to a recent unfortunate event, a slot has opened up in my portable gaming. I always carry my PsPgo everywhere anyway, so I've been trailing my phone as a secondary device to that lately. I have covered mobile games before on OGUK in numerous articles, so it does get a little gaming time every so often. "So why not take a look at something on Android?" I thought. How about something from SEGA. SEGA's release schedule has been a bit barren of late afterall, and as it turns out - Crazy Taxi City Rush is one of their latest releases. With it being designed for smartphones, yet having some of the original creative talent of the series on-board, does it manage to capture any of the Crazy Taxi magic? 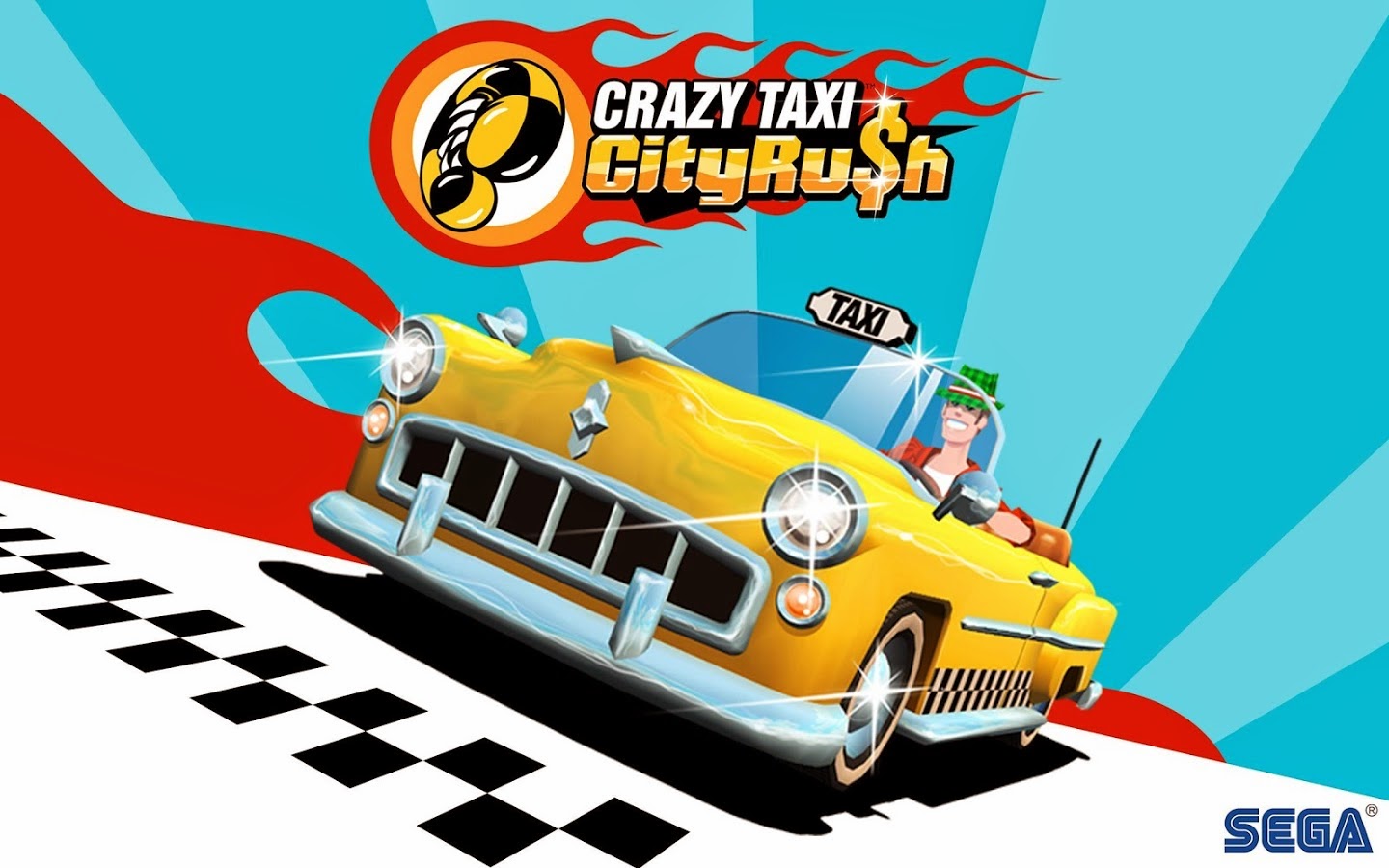 When you first start off you'll get the usual mobile trappings of signing in to Google games (cloud saves & achievements make it worthwhile i guess) As you would expect of a Free-to-play game, its online and will connect to a server before you can start to play. Once Gena shows you the ropes (the very same from previous entries, some others show up too) you get a fistful of dollars to purchase your first taxi. 5 are available, but only 2 are really affordable. Cheaper option allows a few upgrades afterwards while the other is generally a bit better. Its your choice. Once you have a taxi its time to start running that meter! Fares are scattered around the area for you to pick, or you can take part in one of the special missions (checkpoint, destruction etc) to earn cash, as long as you have enough fuel which is refilled every so often. Earning cash is a biggie as it will allow you to buy upgrades making later missions a little easier, completing these mission at the area's HQ opens up other areas for you to earn money (There are 3 in total with a 4th in development for a future update), and also allow you to customise your cab. The levelling up system comes into play here as that unlocks more items for you to buy, customising your cab also has the knock on effect of cash bonuses, making earning money a little easier. Now lets talk microtransactions. Surprisingly, I haven't found it to be that intrusive on this game. You can buy gems (needed to purchase certain taxi's etc) or in game dollars, to help get things quicker if you don't like grinding a little. The main reasons its not a bother is that (1) Your given gems for ranking up, completing achievements - to name a couple of examples and (2) if your shrewd with your customisation of your taxi then you can earn hefty bonuses to your $ count for each fare. So its really down to choice. Do you wanna spend some money on getting the 40 Gems/$40,000 needed for that engine part, or do you wanna play the game and earn it? If you own more than one taxi, you can even hire out your spares to AI or friends to earn extra money. You'll find the game is always throwing a little something your way. There is a difficulty hike though when it comes to the last HQ mission in each area that will require some grinding to get the exotic parts you need, but the rest of the game seems fairly well balanced aside from being locked out of numerous vehicles with silly gem values. Signing into G+ & Facebook also opens up the competitiveness of leaderboards with your friends. 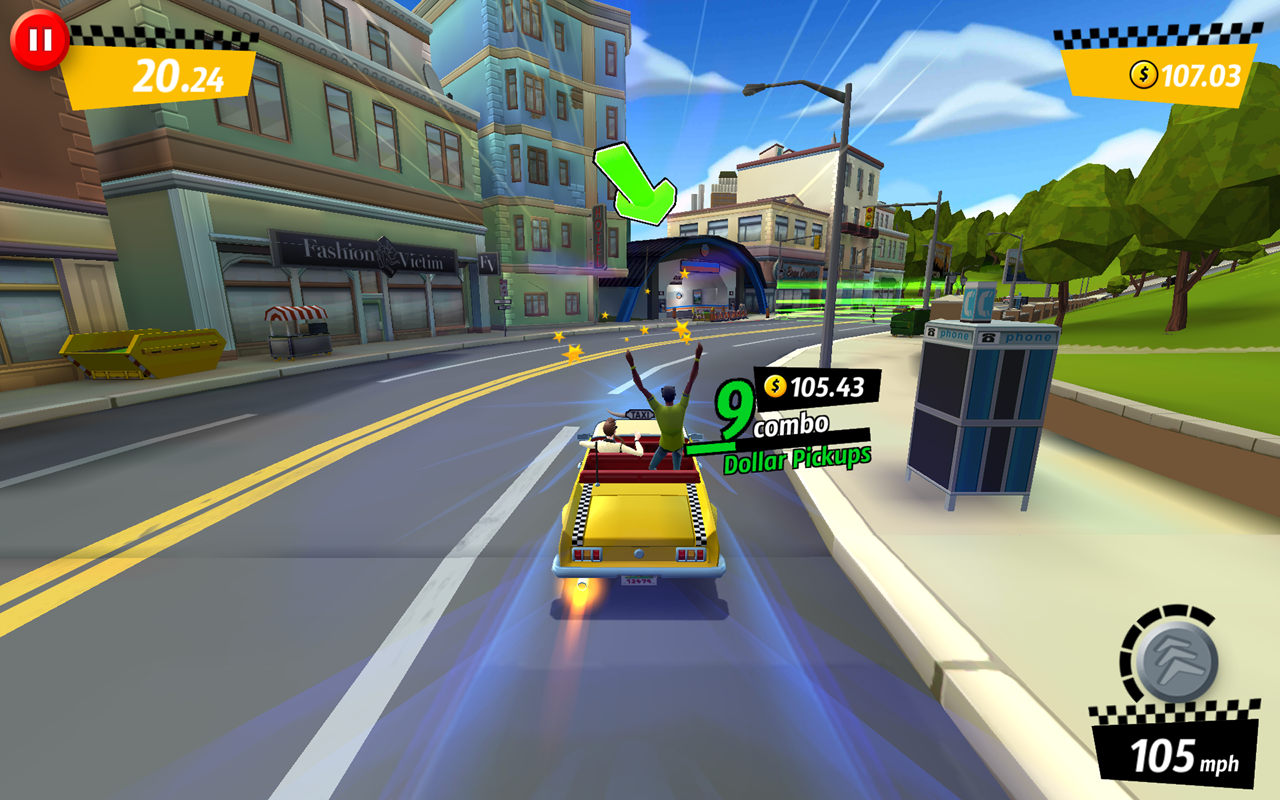 The most important aspect from the point of view of a Crazy Taxi fan will be the gameplay. Does it match the classics in any way? Yes, in most ways it does. The basic premise of City Rush is how you remember a Crazy Taxi to be, getting from A to B as quickly as possible by finding shortcuts & dodging obstacles. It differs in the obvious area of control. Instead of trying to emulate physical controls on a touchscreen, a system of simple touches & swipes keeps things simple. Acceleration is handled by the game, so its just your job to make sure your driving the right way. A tap on the sides of the screen will see you change lane (you can even mount the pavement for a short time if the other lane has an obstacle) holding instead of tapping will see you drifting (needed to hit tight turns at junctions) and tapping the screen when you reach your destination brings you to a stop. Its that simple. A couple of extras are thrown in like a swipe down to U-turn if you miss a turn & a boost button to ignite the taxi's nitro, but that's about it. When you consider the Android port of the original Crazy Taxi only featured touch buttons for steering, drive & reverse, its easy to see why they've opted for a simplistic system like this. To keep things a little more interesting so your not just running fares, there's other things to do. Taxi is similar to the game, but increases in challenge and you earn medals which nets you gems, Tank Smash sees you driving a tank through the streets and smashing/crushing as many cars as you can for a cash bonus (only available every 30 or so hours) and the Daily Rush offers up a checkpoint dash which nets you cash bonuses for each checkpoint hit. Its all similar to the main game, but the shifting of objectives is enough o mix things up enough and having to wait a little while for your fuel to refill between bouts ensures you can't tire of the game as quickly. SO how do the touchscreen controls actually fare then? with the game being designed from the ground up for smartphones, as well as is possible. There's still the odd time when a gesture/tap doesn't register properly, leaving you fist waving at passers by as your timer whittles down, but it thankfully doesn't happen as much as you fear. Which means I'm gonna put my neck on the line here and say, aside from the obvious change in control scheme, this is still the Crazy Taxi we all know & love. 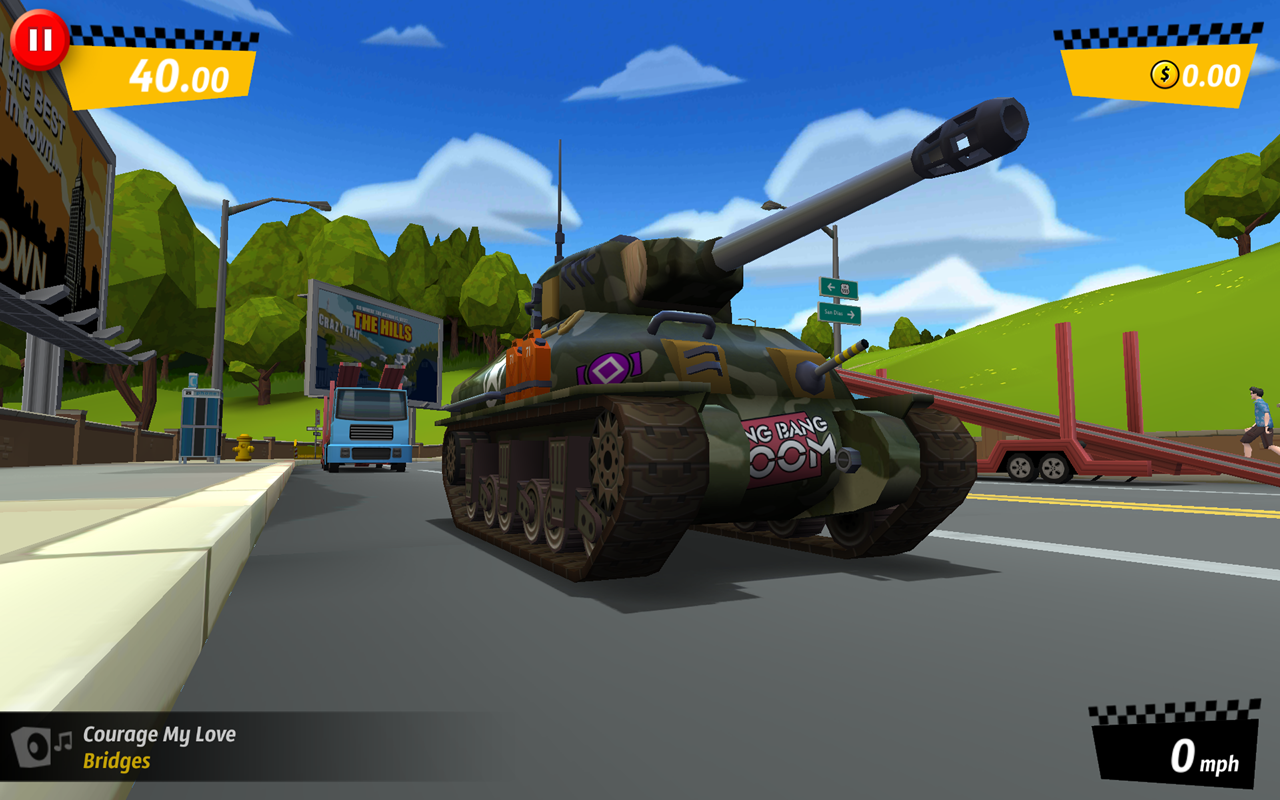 The games graphics will depend entirely on your device, but unfortunately there doesn't seem to be any Low/Mediaum/High option in the display settings to ease phones on the lower end of the spec spectrum. ON my phone though, an Xperia Z, the devices 5" 1080p screen & decently specced internals ensured a solid playthrough. In truth, It probably looks better than its peers even on dedicated handhelds. This is most likely due to the games overall style. The cartoonish aesthetic pops with colour & simplicity that a high resolution screen can take and produce something that's crisp & smooth. There are still areas that are packed with detail though, and the games special effects look great without going overboard in keeping with the games overall style. Framerate is smooth too, although not all the time depending on how often you reboot your phone as leaving it over a couple of days brings heavy bouts of slowdown during the games heavier traffic laden scenes. I guess the game is a bit of a resource hog, as extended playtime raises the temps on the Xperia Z. I haven't mentioned the games soundtrack yet, which is actually decent. A new catchy theme songs plods away in the background on the menus & when it comes to the in-game soundtrack there's some nice tracks. No, its not as iconic as The Offsprings soundtrack on the original, but its certainly not the worst Crazy Taxi soundtrack out there. The lack of an announcer is a bit disappointing though, you'll be a momentary sad panda the first time you fire the game up and see the words 'Here We Go' not accompanied by any announcer. Still, its an altogether impressive bit of software on a technical level for phones, although a little resource heavy at times, and is surely worth a try for the measly 45MB+ the initial download is. 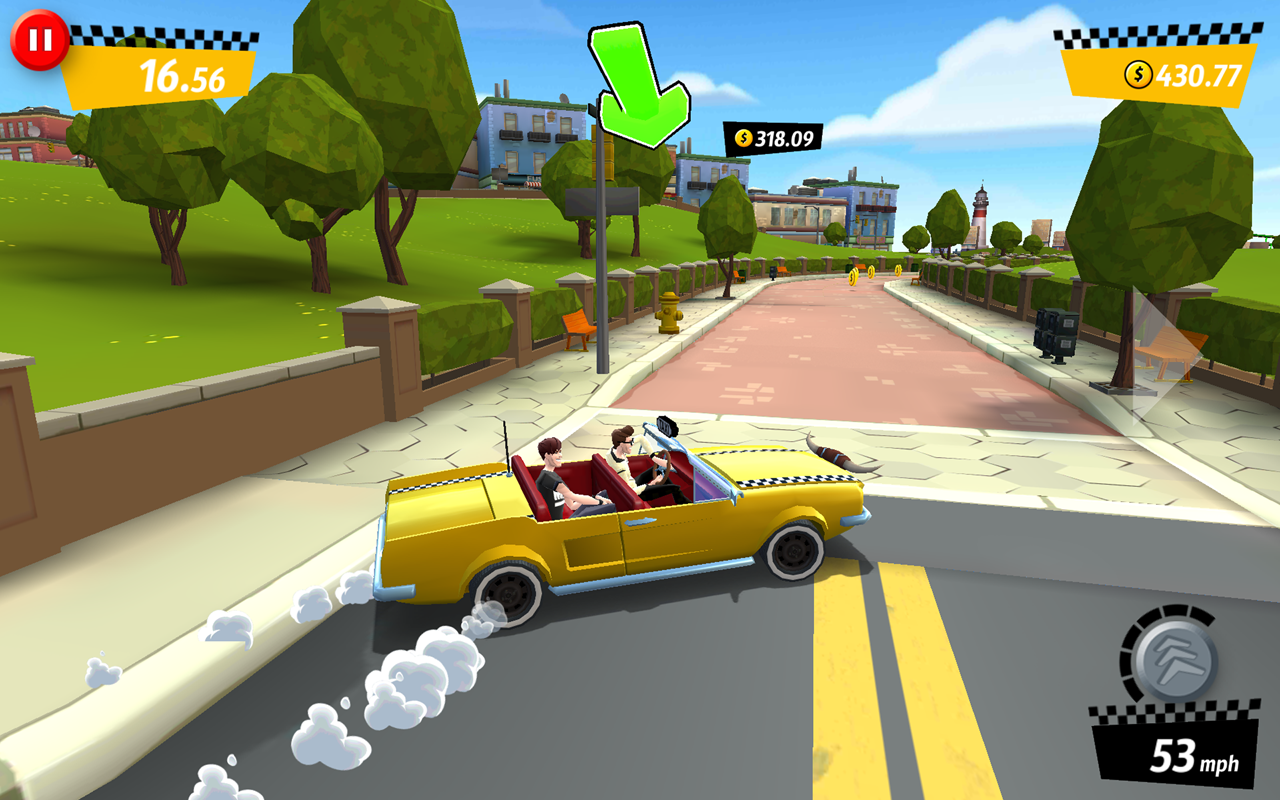 Once you get past the initial stage of 'OMG not a mobile game!' You'll find a game that's even more faithful to the original premise of Crazy Taxi than you thought possible. The usual trappings of a free-to-play game cause a few bumps, some way overpriced cars & the odd difficulty spike, but overall it doesn't hurt the game with most of whats on offer being up for grabs. The games cartoonish aesthetic, customisations & upgrades, simplistic controls and the honest to goodness arcade addictiveness of Crazy Taxi come together to make a worthwhile entry in the series.

Store Links [Google] [Itunes]
Posted by Unknown at 21:11
Email ThisBlogThis!Share to TwitterShare to FacebookShare to Pinterest