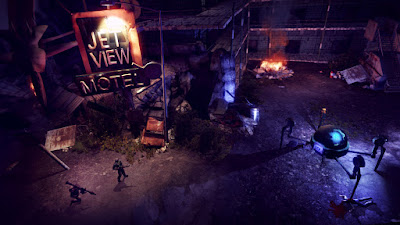 The Wasteland just got even more fun!


Some of you might remember my review of the fantastic kickstarter funded sequel to the 1988 Commodore 64 classic Wasteland (Wasteland 2 Review PC). Cited as the spiritual successor to the old Fallout legacy Wasteland 2 was generally favourably received by reviewers and public alike.

The game has been given a big upgrade in its transition to its Game of the Year edition. Moving up to the Unity 5 engine brings big changes to the environmental textures, character models and lighting effects, on top of this already substantial change several thousand lines of new dialogue have been recorded, new item drops, new perks and trade-offs, changes to encounters, several in game systems overhauled and a new system called Precision Strike has been added.

Precision Strike has been clearly inspired by its Fallout little brother, allowing you to target specific body parts on an enemy to inflict various effects, cause critical damage and give yourself an edge in the fight. This will add a new layer to an already engaging experience and could give you the small boost you need to survive the wastelands.

In a show of rarely seen love from developers, InXile have given all of these changes for free to all owners of the PC version with an automatic upgrade. Alongside this announcement they have also revealed that Wasteland 2 will be ported to PS4 and Xbox One along with all the mentioned upgrades intact.

Very little about the PS4 and Xbox One version has been said openly yet, but I honestly hope it becomes a much loved title from a genre very little touched on for console players and a gateway to more titles from the t-rpg genre to break onto consoles.


The coming upgrades will take effect somewhere in the summer this year with the console releases assumed to be around about the same time.

See you back in the Wasteland Rangers


For those who have not picked up the PC version and are interested, it is at time of writing available on Steam priced at £29.99 and the Original classic for £4.49 at the following links.

Wasteland: The Original Classic
Wasteland 2
Posted by Unknown at 21:03
Email ThisBlogThis!Share to TwitterShare to FacebookShare to Pinterest