Qmega Quintet is a PS4 title on May 1st 2015 developed by Galapagos RPG and published in Europe by Idea Factory. 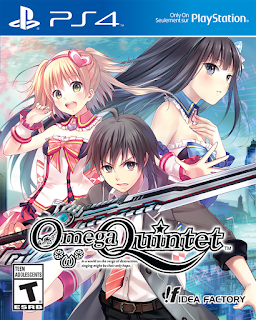 Omega Quintet is the hybrid love child of JRPG and Idol simulator, quite possible the first of its particular kind. Its core story hinges around humans desperately clinging to their existence and sanity by relying on the unlikely power of song and dance to destroy a great evil known as the Blare who is ravaging the planet and destroying the minds of its inhabitants, their only salvation is the Ultimate teen pop group! 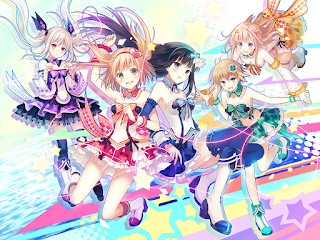 In a world plagued by monsters and the end looming closer day by day, people rely on their only lifeline, the beloved verse maidens. Young women with the ability to tackle giant bats, golems and dragons using the power of song and dance (and in no small part the power of large hammers and guns). The Verse Maidens do battle with the MAD monsters created from interaction with Blare, unlike humans who lose their minds when in contact with Blare other lifeforms become grotesque beasts. You take the role of Takt and play out his job as manager and body guard to the maidens and also the role of the maidens themselves to destroy said monsters live on tv for your adoring fans. 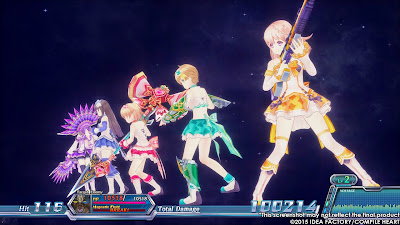 While I was personally excited for this and loved the premise in actuality I found myself a little disappointed, mostly because at any point the story seemed bleak or there was any sense of a major danger it would almost instantly attempt to turn the situation humorous, and I felt this may leave some players lacking the urge to really push on. Despite destroying most of the suspense the story flows quite nicely.

Unfortunately unlike other titles that use humour as a great core concept such as Hyperdimention Neptunia, Omega Quintet often feels forced and unfunny, all too often stepping into stereotypical cliché’s in its use of humour in both the main story and optional scenes. The biggest gripe I had with the story itself is the fact that almost nobody seems to even care about the problem at hand, NPC’s do not make mention of it or seem to even really know what is going on, Takt himself often goes from cliché unlikely hero with an attitude to an uncaring, negative character who clearly isn't bothered if he saves everyone or not, while he manages to make it happen I found it difficult to get behind the biggest hook of the storyline. 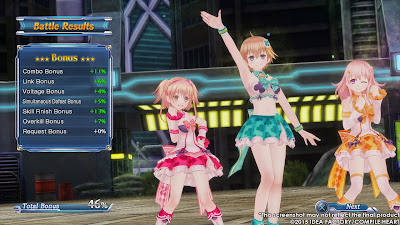 The visuals are what most would expect from a JRPG of recent years with 2d visual novel styling story telling making up most of the way the story is moved along, occasionally offering a still image for the optional gallery collection. It then switches to a 3d viewpoint for the battle system with movement somewhat similar to Hyperdimention and Fairy Fencer, although mostly well done I cannot say that they are particularly outstanding or next level however they are tried and true getting the job done well with solid speed and no stuttering even via Vita remote play leaving no real sense of disappointment.

Omega’s gameplay is another sore point for me, not because its bad per-say but because it is far too cluttered and overall confused, myself and others have agreed that it really is a case of less would have been more. Each of the individual features such as live concert mode where you  fulfil requests to gain bonus stats or harmonics that allow you to chain up to all 5 heroines actions to the disc analysis which teaches them new skills are all brilliant features in there own right but it just seems like they tried to tick of all possible rpg boxes including recycling and creating equipment, quests and editing anything from dance moves through music and even camera angles. 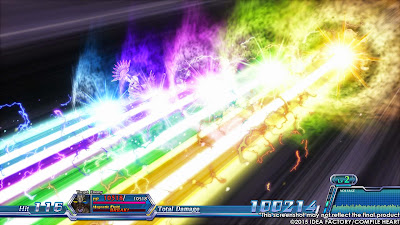 To sum up this title it has all it needs to be brilliant yet continuously falls short by trying too hard to incorporate everything, this often causes it to actually limit itself and leaves everything feeling cluttered and direction-less. It really is quite the shame really as it is obvious what it was aiming for.

Posted by Unknown at 20:10
Email ThisBlogThis!Share to TwitterShare to FacebookShare to Pinterest