With all this talk lately of the PsVita TV and the whining at Shuhei Yoshida on Twitter over a lack of a release date so far for the west, It deos stir the old memories for one of Sonys previous endeavours. Remember the PSX? Sony's DVD-R & HDD recorder that also contained a Playstation 2 in its shell? NO? Well lets have a retrospective look then! From Wikipedia:
The PSX (ピーエスエックス Pī Esu Ekkusu?), also known as the PlayStation X (プレイステーションエックス Pureisutēshon Ekkusu?), was a Sony digital video recorder with a fully integrated PlayStation 2 video game console. It was released in Japan on December 13, 2003. Since it was designed to be a general-purpose consumer video device, it was marketed by the main Sony Corporation instead of Sony Computer Entertainment. It was the first Sony product to utilize the XrossMediaBar (XMB) interface. Its high cost resulted in a lack of consumer interest.[1] The PSX was never released outside Japan. 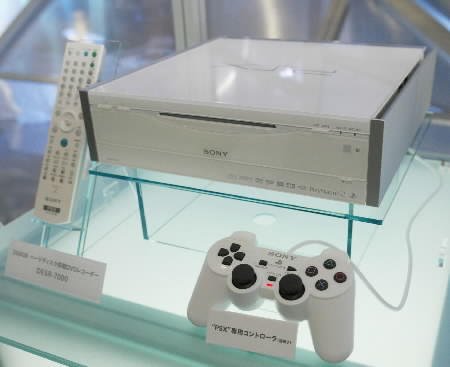 Quite the looker isn't it? Back in the day when all the Ps2 magazines were covering its development and reveal it was very hard to not be a tad hyped. Hell, I actually started to save for one when it launched in Japan in anticipation of a release in the West. It took over a year of denial before I realised it wasn't coming westward. So what was so good about it? Well It was a HDD & DVD recorder that you could play games on, while recording TV! Sounded like a really good idea back in the early 2000's and would have cleared the ol' VCR away that was still popping up every now n again for recording duties lol On the rear of the console was S-Video,Composite and RF inputs for recording and the output was fed through the AV multi-out used by the Playstation, so Component was possible for that all important Prograssive scan. There was also 2 controller ports for the DualShock 1& 2 to connect with the box and slots on the front for Memory Cards, Memory Sticks and also USB. Also included was an Optical out and a built in ethernet port on the rear (No adapter needed like the chunky Ps2 model) The internet could be accessed and browsed on the device and the system was also open to firmware updates to implement new features etc. The PSX was also the first of Sony's devices at the time to sport the XMB interface which would later go on to be implemented with a wide range of Sony's products, notable PsP & Ps3. Also included within the XMB was software for editing audio, video and image data. The built in network adapter and HDD (160GB or 250GB) were also compatible with any games that could use the 2 devices, notably Final Fantasy XI. The PSX came came with just a remote control when purchased, but a white DualShock 2 with a 4-meter long cable could be bought alonside the console or you could use the controller ports on the rear for your own controllers. Retailing at 79,800 ¥ ($749), It was no wonder that it didn't take off like Sony expected it to. Apparently only 250,000 were sold altogether.

So why have I brought this up? Well, its to show Sony have been down this route before and to also show why people freaking out over there being no release date in the west for the Vita TV is a little premature. Think about it, The PSX never made its way here because it flopped in Japan, big time. It was a feature rich, and undeniably cool, Playstation 2 with an eye-watering price tag. The Vita TV on the other hand is listed at 9,954 ¥ (14,994 ¥ [$150] with a DS3 & 8GB card), which is roughly $100. Preorder stock in Japan has already sold out on Amazon! So its more than likely not going to end up as a flop like the PSX due to its price being low and demand already being high. If you was to think logically, you'd summise that the reason Vita TV is only announced for Japan at the minute is probably due to the Ps4 launching there in February. It would be stupid of Sony to launch the Vita TV here alonside the Ps4 n confuse consumers (Yes, people still get confused over the Wii & WiiU as an example) with saturating the market with new Playstation products. The Vita TV will come, Just probably not till at some point next year - Id say after the Japanese Ps4 launch if I had to guess.

The PSX. A true multimedia console as Sony had always envisioned theirs to be. Its a shame it didn't arrive in the west. There was a growing market at the time for DVD-R recorders (I had an LG one myself that was a bit pants) but alas, we'll never know now how well it would have done here. With only 250,000 (approx) being sold and also the units having NTSC-J region locking, Its incredibly difficult to come across one of these. Incredibly expensive as well to be honest. If I ever have the chance Id probably still buy one if the opportunity arose. Its a one of a kind machine that we'll probably never see again from any of the console manufacturers. If your interest is piqued, theres even more information for the PSX on the Video Game Console Library website

So breathe easy everyone and calm the frak down, the PSVita TV will be coming to west...
Posted by Unknown at 15:07
Email ThisBlogThis!Share to TwitterShare to FacebookShare to Pinterest