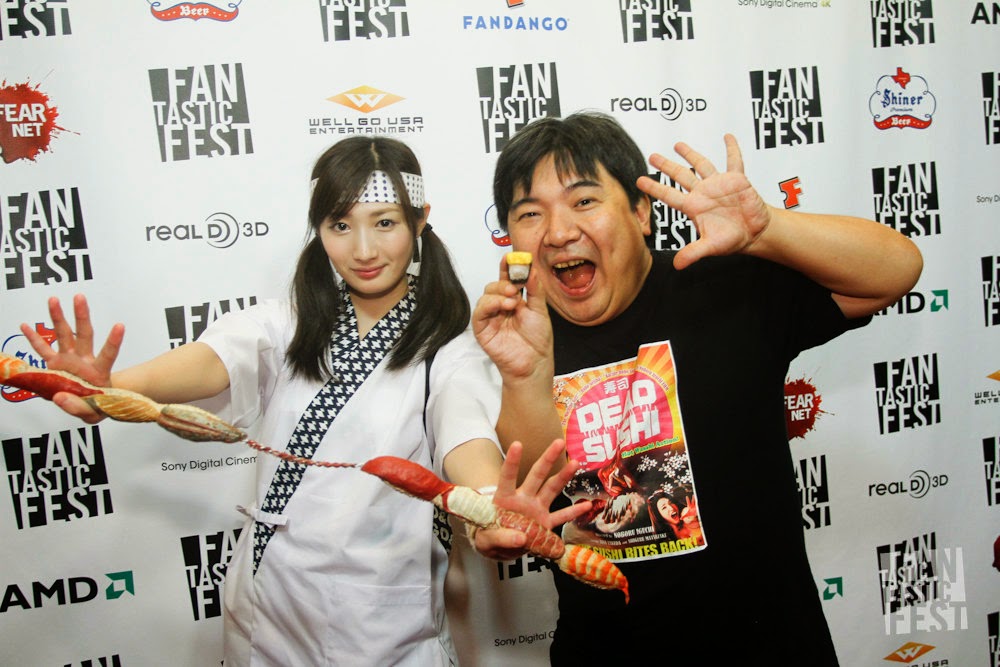 Seen as we're looking to increase our original content output a little here at Otaku Gamers UK, I though it might be a good idea to run something a little different. There may be a time when you need to take a break from a game for a while and the thought of putting on an anime just doesn't seem to cut it, so I'm gonna take a look at some Japanese movies you could try to break up the long hauls a little. First I'm going with my favourite director, Noboru Iguchi (Pictured above on the right, with Rina Takeda at Fantastic Fest) His films tend to be low budget & are pure Exploitation/Grindhouse fun, absurd storylines with all the usual tropes of the grindhouse scene we used to have in the west that offer up some imaginative films (in an extreme sense) Lets take a look at a few... 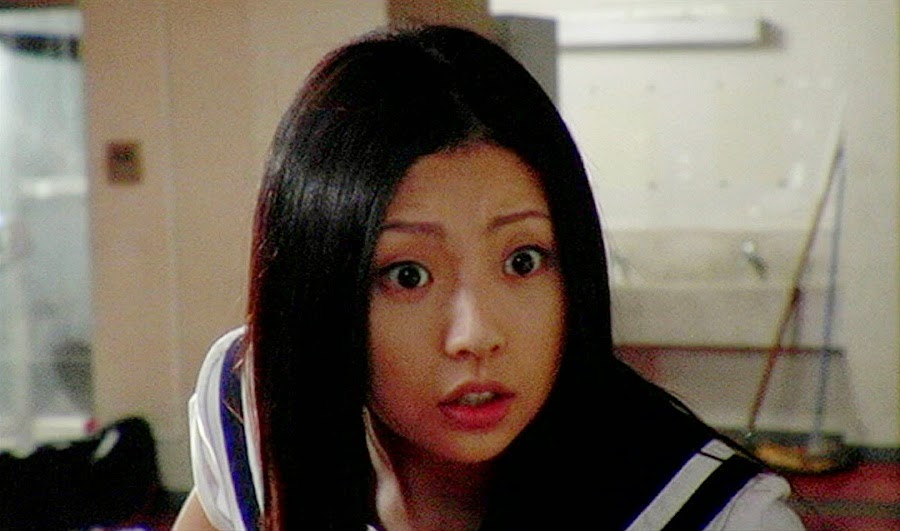 Sukeban Boy (2006)
This one I only managed to finally see recently. Its definitely one of the hardest movies of Iguchi's to find on disk, due in no small part to its age & a small print only released in the US for the west. The film follows the Oira Sukeban (おいら女蛮) manga to a point, before branching off into its own level of iguchiness. A teen boy with a feminine face is teased everywhere and is expelled from numerous schools, so his odd biker father dresses him as a girl and sends him to an all-girl school. He introduces himself as Sukeban, and a classmate Michiko takes a shining to him and offers to show him some clubs. Here's where Iguchi's wackiness takes over as a masked axe wielding, half naked warrioress turns up to cause trouble. Cue breast guns, laughable fighting choreography n the like as everything goes to hell for Sukeban. Asami seems to nail the role of a teenage boy masquerading as a girl, who's goofy Sukeban portrayal brings plenty of laughs. Plus she Asami fights nude at the end. Extra Kudos from me. This Sukeban Boy though, it's probably one for Iguchi fans to go back to. Its ridiculously low budget & if you haven't seen any of his films before, the whole thing could be lost on you. 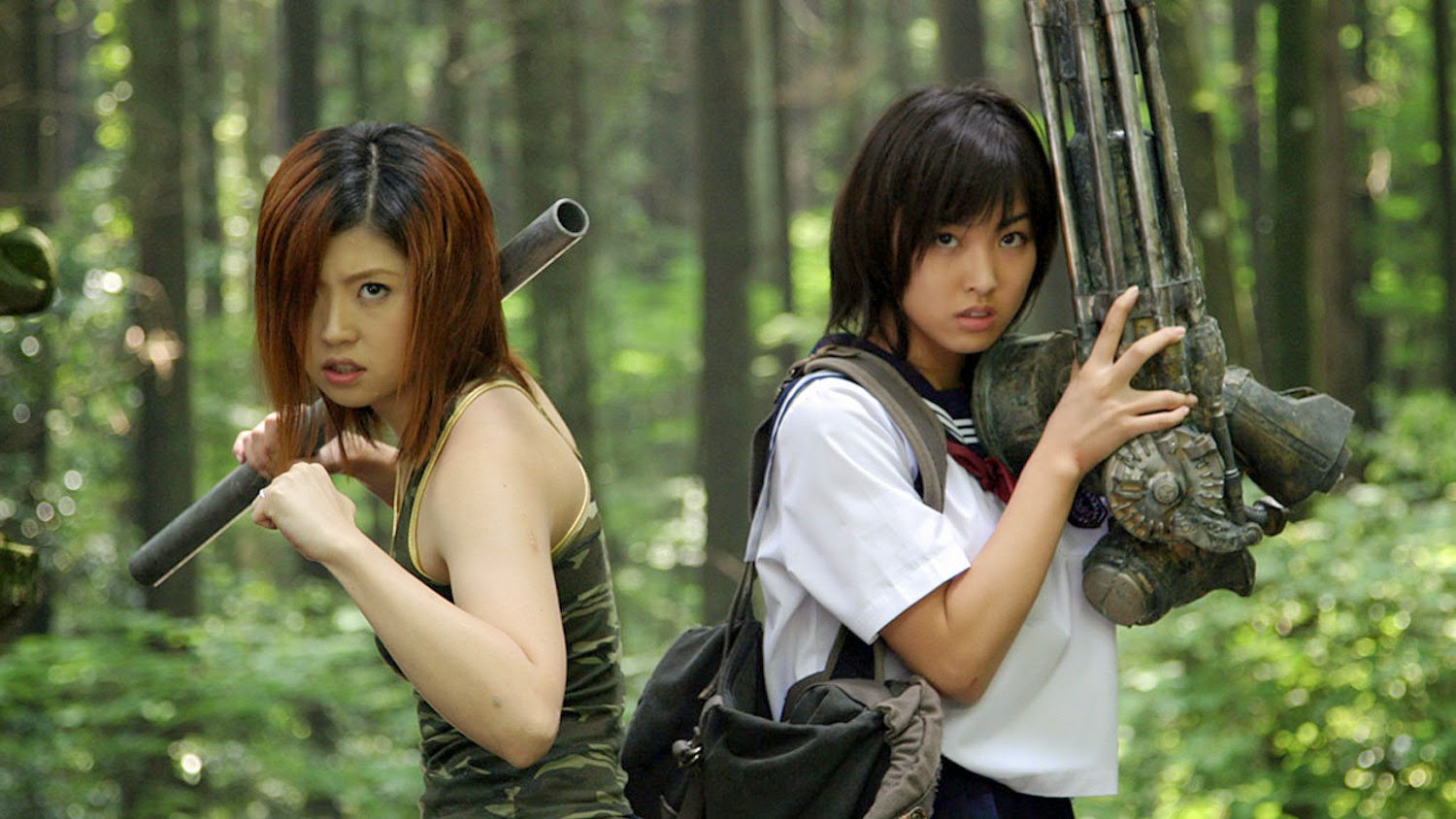 The Machine Girl (2008)
If you're new to Iguchi's films, this is probably the best place to start. From all of his releases going to be talked about here, this is the least absurd - even though it does feature a girl with a prosthetic arms that's a machine gun& the famous Drill Bra later in the movie! The story for the movie is a simple revenge story. Ami is an average high school girl whose world comes crashing down as her younger brother & his friend are murdered by school bullies led by Sho Kimura, son of the local Ninja-Yakuza clan boss. Cue a quest for revenge, as Ami is later joined by the mother of her brothers friend (played by Asami), with them fighting their way to a showdown with the Ninja-Yakuza boss. The movie still carries gore & the odd silly moment, but compared to other films here its quite grounded. There aren't really an absurd set-pieces, as with say RoboGeisha, so its an accessible starting point for anyone interested in seeing what the fuss is about. 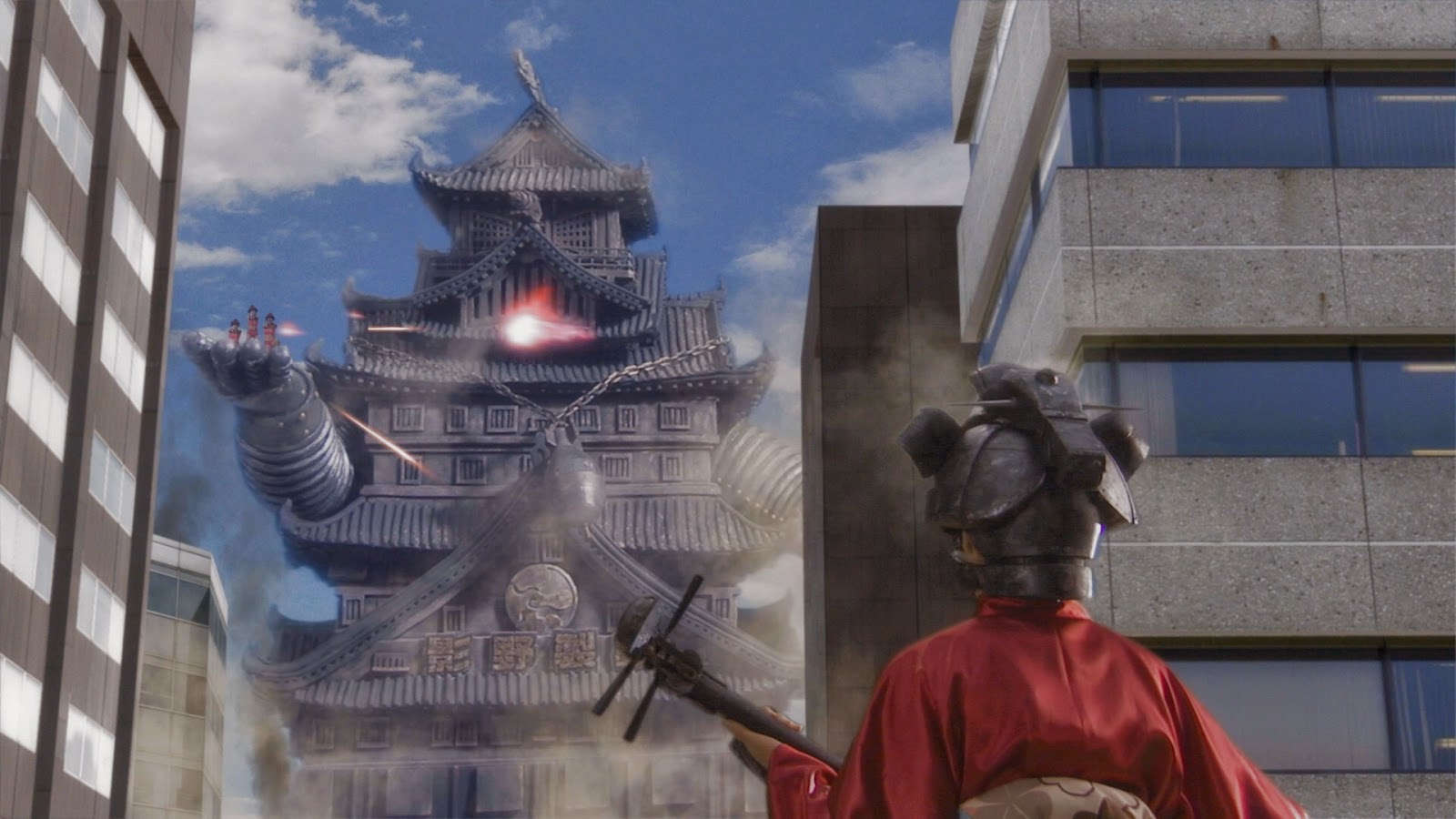 RoboGeisha (2009)
I remember this being the first Iguchi film I picked up on Blu-Ray. All it took was a simple "From the director of The Machine Girl" on the case and I was sold. When it comes to imaginatively absurd films, RoboGeisha is defintely up there with the best of them. The story seems simple enough as it focuses on Yoshie, who works as a servent for her sister Kikue at a Geisha training house. One day Yoshie ruins her sisters performance for Kageno, owner of Kageno Steel, but as he has taken an interest in Yoshie - he invites them both to his house anyway. Its here, when they are captured by Tengu, that they realise whats really going. Kageno steal are building weapons & training Geisha assassins! The absurdity here comes from the robotic upgrades the geisha can get. Machine Gun Breasts, Wig Napalm, Butt Blades are just a few with the tengu all amusingly having 'Breast Milk of hell' that melts foes. It doesn't end there either as there's a robot castle which smashes its way through a city, and the skyscrapers bleed! It helps a lot that the film is colourful, with some inventive camera shots & packed with CGI blood to give it a live-action comic/manga look. Its absurd, but its an hilariously enjoyable ride for those that give it a chance. 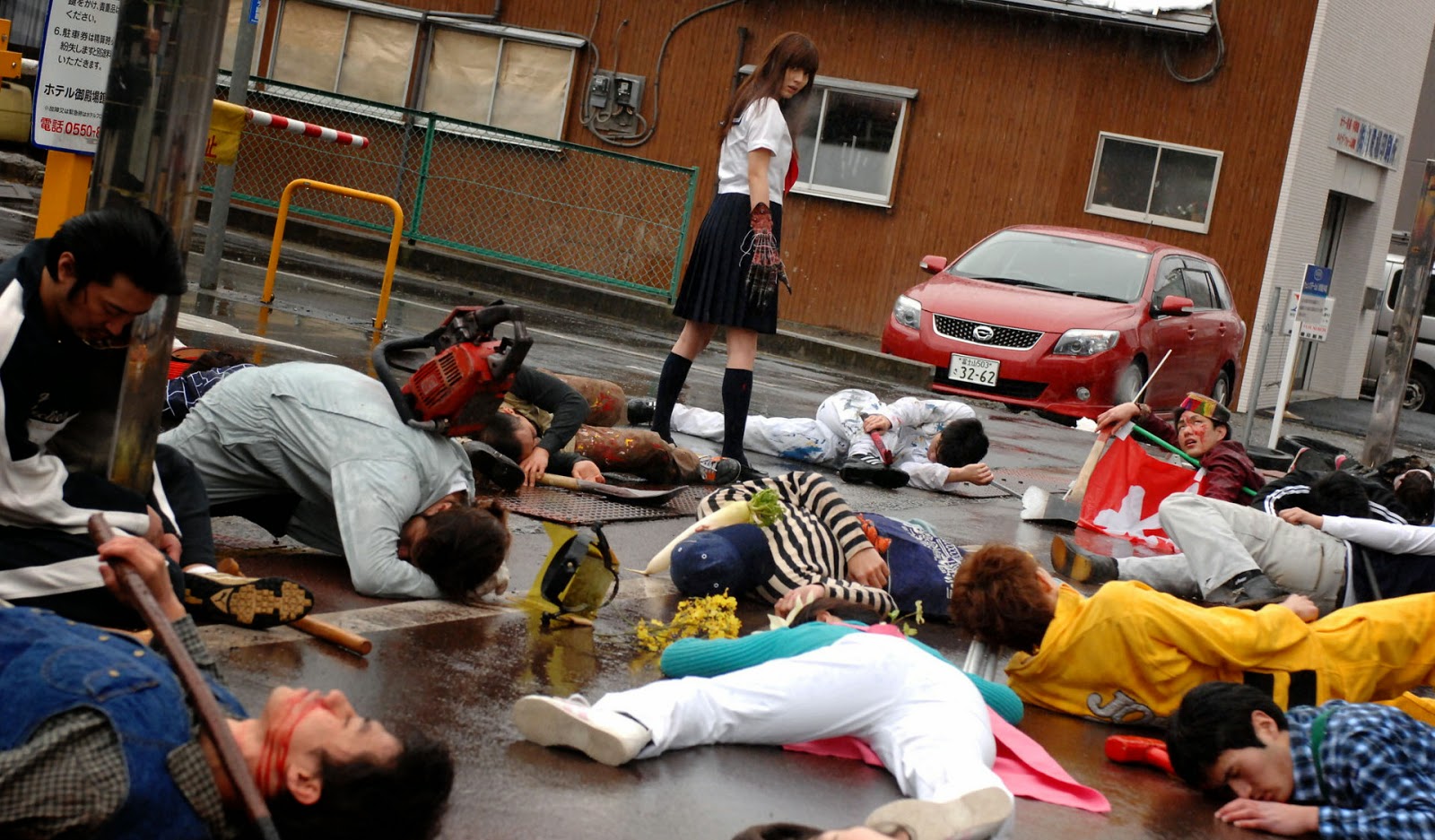 Mutant Girls Squad (2010)
This one is a little different to the others, as it was in fact directed by 3 directors as apposed to just one. Noboru Iguchi, Yoshihiro Nishimura & Tak Sakaguchi all took a part of the film to direct. Maybe its due to how much of a good job the screenwriter did, but the 3 acts from different directors seem to flow together brilliantly. The story for Mutant Girls Squad focuses on Rin, who on her 16th birthday finds out that her father is in fact a mutant (or Hiruko as they are named in the film). Anti-Hiruko police then raid the house, killing everyone but Rin as she escapes (Her escape from the town is surreal as she seemingly has to fight everyone!) She later joins up with a clan of Hiruko, whose leader - Kisaraga - has declared war on Humans. As you would expect, there's plenty of action sequences with lashings of gore & quirkiness which is mainly apparent in the mutant girls. Butt Chainsaw anyone? But the main focus is on Rin & her realisation of certain aspects of her heritage, that forms the basis of the film. Its a step up in absurdity from The Machine Girl without a doubt, but not much more than that as it tries to keep some seriousness for Rin's path in the story. 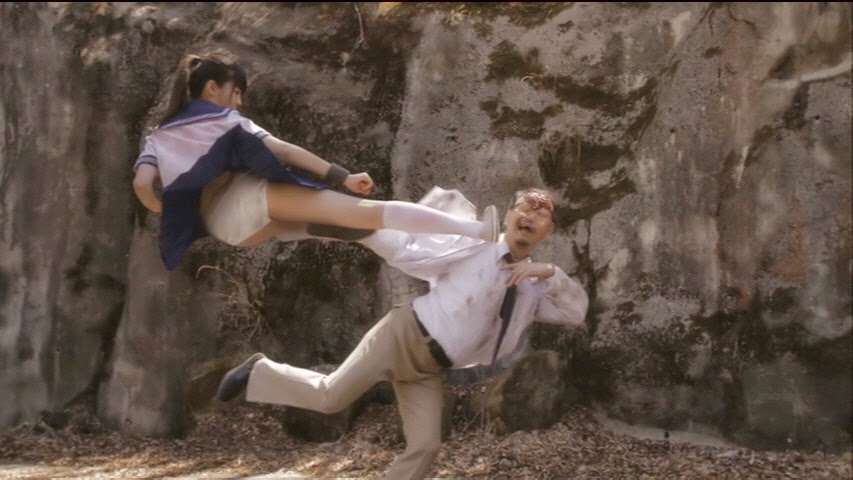 Zombie Ass: Toilet of the Dead (2011)
As your probably already guessing, this one is as absurd as its title suggests. The film opens up with Megumi, wracked by the guilt of her bullied sisters suicide, taking a break with some friends & going on a trip. Its on this trip that one of her friends, Maki, decides to swallow a parasitic worm to apparently help her stay slim. From this moment on things just snowball in the absurdity stakes. When Maki goes into an outhouse to try and poop as the stomach cramps caused by the worm have her thinking she's constipated, a zombie rising up from the stool pit underneath starts the proceedings. Zombies throwing crap, parasites popping out of a-holes, exploding heads etc its all here and more. Things take another twist when the survivors find Dr Tanaka & his daughter as they have their own part to play. This is one film that takes its absurdity to some extreme levels towards the end, but that doesn't stop it being amusing either. When the end credits roll, you'll no doubt say "WTF did I just watch?" Its not a film for everyone though, that's for sure, but I would recommend it if you've watched some of the other stuff here and your looking for your next fix of absurd Japanese cinema. 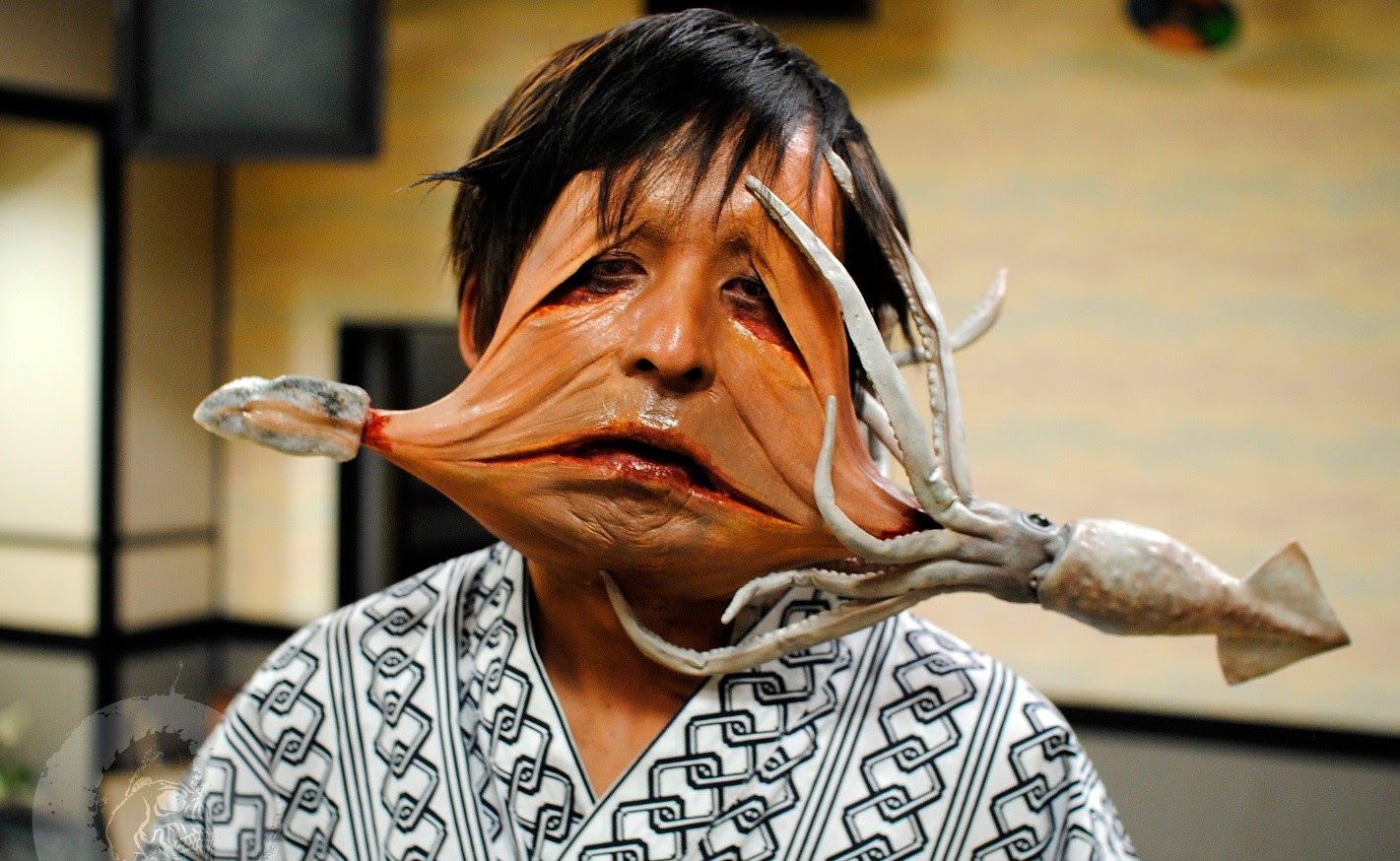 Dead Sushi (2012)
It is said with this movie, that Iguchi was influenced by the surprise popularity of the likes of Pirhana 3D in Japan. Its easy to see why when you watch the film. With this one the story follows Keiko, as she runs away from her family's Sushi bar before finding employment at an inn. While at this inn she gets into an altercation with staff from Komatsu Pharmaceuticals and its not long after that a stranger arrives seeking revenge on the people from Komatsu by using a serum to mutate the food into killer Sushi! The sushi doesn't always kill as it can turn people into mindless drones. Its a simple premise that plays on the 'animals attack' vibe. As you would expect though, comedy moments (see the above pic) and absurd set pieces carry the film. The sushi battleship towards the end is ridiculous. Not the best of iguchi's work, but still a humorous movie to sit through.

Noboru Iguchi has obviously worked on more than these here, those others I may be adding to later lists if I carry on with this line of features, and there's also a couple of new movies this year to look forward to in Nuigurumaa Z & Live from the man himself. I thought it would be best to focus on movies that may be relatively easy to acquire (Aside for Sukeban Boy) in case any of these have left you interested. Like Ive stated before, his films aren't for everyone, but if your looking for something imaginative & hilarious to watch, then Noboru Iguchi's films are worth considering due to how absurd they can be.
Posted by Unknown at 20:37
Email ThisBlogThis!Share to TwitterShare to FacebookShare to Pinterest