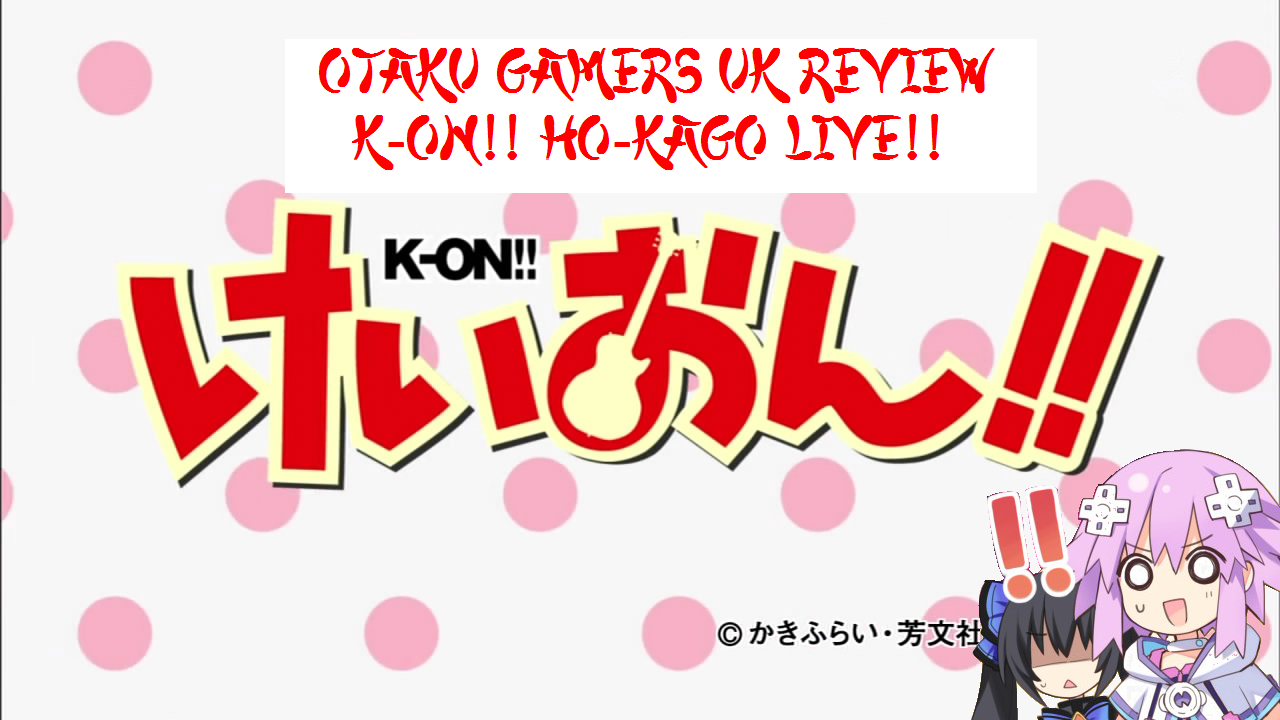 I've decided to start up a new subset of reviews entitled 'Otaku Review'. This will focus on games that would need to be imported & played in there native Language (or patched with a fan translation if available) When there isn't any reviews to publish, these could fill the gap with original content. Anyway, Ive been playing a lot of Japanese games lately on the PsP, so the first review in this new subset is going to be K-ON! HO-kaga Live!! Now I became interested in the title due to it being a rhythm game, but of course also because its K-ON!!. I do like these rhythm games and I find they fit the handheld medium perfectly, so how does this one fare?
Once the game is fired up and your past the usual SEGA screen (done in a cutesy way with Yui's voice) a short introduction is done with the characters and away you go with the first song. Ok I'm gonna get a little issue out of the way first. There are only 19 songs in total. Compared to its peers, K-ON!!'s list is a little short. Ive said its only a little issue as it is somewhat alleviated by the fact there are 5 characters (Yui, Azusa, Mio, Tsumugi & Ritsu) that all play different instruments which gives each playthrough of a song a unique flavour. Normal & Hard modes also switch things up a little. It just wouldn't be an eastern released rhythm game these days without the customary costume changing etc so that's all included. You unlock Items & clothing as you progress which can be used to boost performances or even unlock special events, all depending upon how high your final grade is at the end of each song played. During you time through the story you will unlock events anyway (kinda like a story segments) but also having certain characters in certain locations (more than just the classroom to visit) with certain items you give them can unlocking more (40-50 events reputed in total) Playing through the game also unlocks more options for you on the menu. Making MV allows you to create your own MV's with a select amount of options, A clock option turns your PsP into a talking K-ON!! clock and of course, Multiplayer! Having a multiplayer surprised me somewhat and it seems a decent take on the usual affair. 5 players are able to join via ad-hoc and as you've guessed each takes the role of a band member and plays there part in each song. At the end each person is graded on how well they contributed to the performance to add a little bit of a competitive edge. Aside from the game's minor issue of only 19 songs, which are all pretty much great to listen to by the way, the game is packing a lot of content and activities. Interacting with the characters in multiple locations to unlock events & boost performances while improving your own scores to unlock more goodies should keep you busy for quite a while. 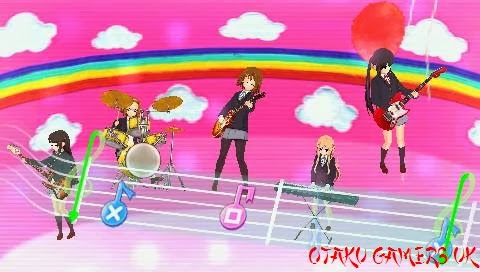 With this being a rhythm game, you'll already have an idea on how the game is going to play. The playable songs have two difficulties, normal and hard with the score you receive depending on how many mistakes are made while playing the song, as you'd expect. As with any rhythm game, you have to hit the right button when the music note goes over it. Chains are formed until the player misses a note. Sounds like your typical Rythmn Game mechanics so far. Each playable character has a different way to play though, and this is where the game shines the most for me. Yui Hirasawa works mostly with the O button, Azusa Nakano mostly uses the X and □ (square) buttons, Mio Akiyama uses the arrow keys, Tsumugi Kotobuki uses the □ (square) and △ (triangle) while needing to hold the buttons and Ritsu Tainaka uses the down arrow keys and the X button. Its this way the game has structured each song that makes it feel like the game has more than just 19 tracks. Having 5 ways to play a track with 2 difficulty modes gives a much higher amount of unique playthroughs than first though. As with SEGA's other rhythm series, Project Diva, the gameplay is incredibly responsive & feels as refined as a series that's been around for years with mechanics that just work & never falter. Top notch gameplay that fits the PsP perfectly, although with the notes being on a bar that you have to make sure you follow can lead to the odd missed note when the next bar is up and a note is really close to the start. Still, its only a minor issue that you'll no doubt get fully used to after a few songs are finished up 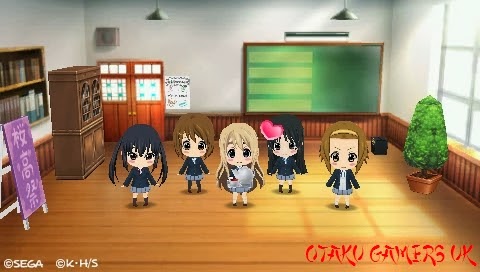 Graphically, the game seems to mix two styles. When doing anything other than playing through the songs, a Nendroid/Chibi style is used for the characters which looks good. When playing through songs, a typical style is used that resembles the show quite well in all its cel-shaded Moe glory. The fidelity on show is quite impressive for the PsP, as SEGA has shown before with its other rhythm game series that its able to extract some decent visuals from the handheld. All the usual things like resolution & even anti-aliasing seem to be of a fairly high standard producing a clean image. Things are a little jaggier when the Nendroid style characters are used tho on the menu's etc, which baffles a Little. Thankfully the nice graphics don't come at the expense of a decent framerate as the game nips along at a smooth pace, seemingly never dropping a frame. The 19 tracks on the game though are all well produced. Not only are the MV's good to watch, but the songs are also well done. Considering the music is based around a 5 person rock band, there still a nice variety the songs with a few surprisingly catchy ones that stick in your mind & put a smile on your face.
*I use a PsPgo which features a screen half an inch smaller than other models so games tend to look a tad crisper* 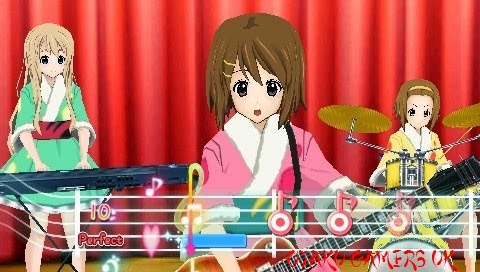 Conclusion
SEGA has struck gold again in the rhythm game stakes. Only having 19 tracks & the odd nuance here n there prevent a perfect score, but unique playthroughs for all 5 characters & wealth of unlockables coupled with a surprisingly good ad-hoc mode ensure theres much to do. A perfect handheld game that matches its peers, maybe even exceeds them, and a must for the discernible Otaku PsP owners out there.

Footnote: Ill use the footnote for these 'Otaku Review's to let you guys know of any translation patches or difficulty in playing native. This game doesn't have a fan-translation but it is relatively easy to play native. Little knowledge of Japanese is need, but if you get a little lost theres a handy little guide here - LINK. A very easy game to figure out tho for those interested
Posted by Unknown at 16:14
Email ThisBlogThis!Share to TwitterShare to FacebookShare to Pinterest