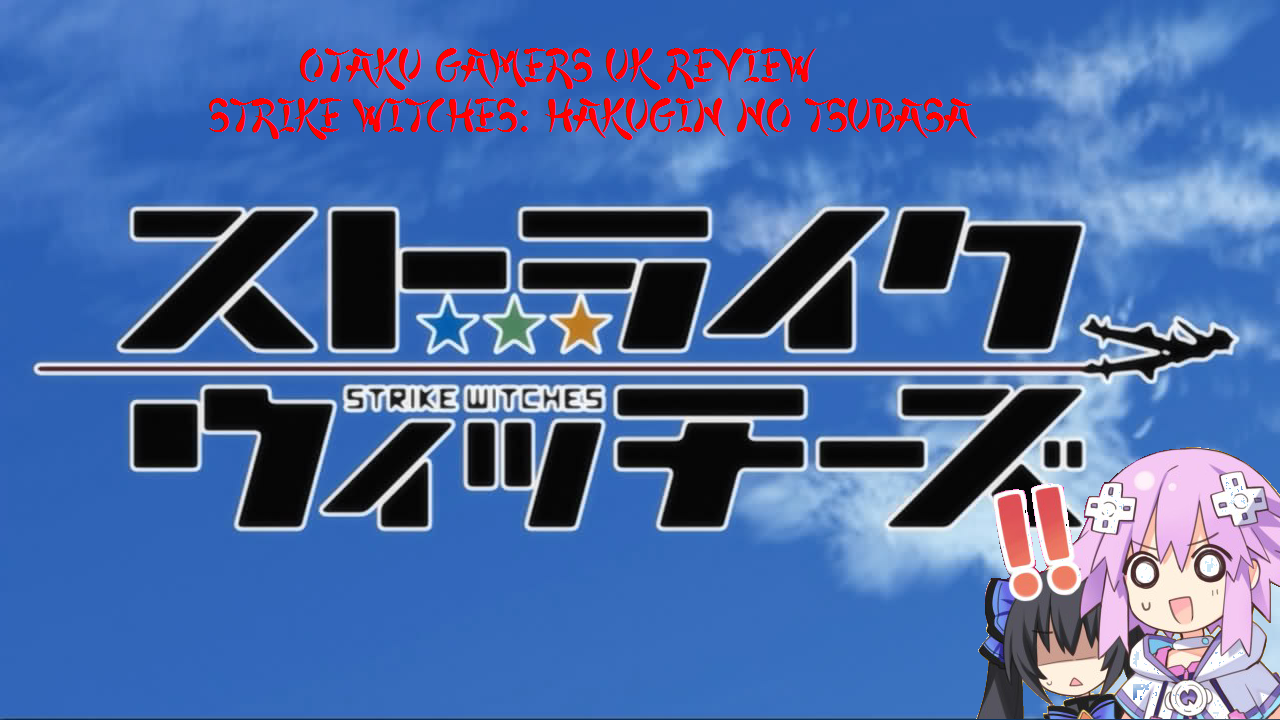 Todays Otaku Review is for a game that started out on the Xbox360 before finding its way to Sony's PsP. Normally when people come across games for anime's, they tend to be along the lines of RPG's or Visual Novels. Today's game is Strike Witches: Hakugin no Tsubasa (Strike Witches: Silver Wing), a bullet-hell shmup based on the popular series. With it taking a different gameplay route than the usual fare, how well does it perform?
The storyline for the game follows the series well, placing itself in between season 1 & 2. Those new to the series may not be bothered much, but fans will want to lap it up as its fully voiced by the cast from the series. The story mode unfortunately has to be completed before other areas of the game are opened to you. You'll more than likely have started with the story mode anyway, but some may not like the restriction. Once story mode is done with, Arcade/Time Attack & Practice modes are unlocked. Arcade allows you to freely form a squad from the 13 witches in the roster (In story mode you are limted to choosing between 4 squads of 3 locked units) and tackle each of the levels how you see fit, choosing your difficulty etc. Time attack mode is similar, but you are graded on how fast you can defeat all of the bosses in the game. Practice mode does exactly what it says on the tin as you choose a witch and play a stage to get to grips with the individual aspects of each one. The Base mode is where you'll be finding most of your unlocks. As you play through the game this area will be continually updated with additional content and there are also conversations to listen on & music to listen too. Some of the content was added from the DLC released for the Xbox360 version, so those fond of that release yet didn't pick up the DLC can find it here within this release. It must be noted though that this game fully deserves the 'Bullet Hell' tag. Those expecting a cakewalk due to it being based on the Strike Witches licence will be in for a rude awakening when they fire up the game. Even on the lowest difficulty of 'Very Easy' you may find yourself succumbing to the game and hitting up that continue a couple of times.  The difficulty you choose will have an effect on how long the game will last you no doubt, but even then your looking at a solid 10+ hours if your looking to sample most of whats on offer. Its a shame then that the games structure doesn't really deviate from the shmup norm, with levels consisting of surviving waves of enemies while travelling horizontally till you reach a boss at the end, although sometimes a level has multiple bosses. Its not that its a bad thing, as shmup fans will feel right at home & it keeps things ticking along nicely for those who have come to see what the girls have been up to between season 1 & 2. With the gameplay (more on that in a moment) having a couple of interesting quirks, a little more could have been added to the games overall structure. 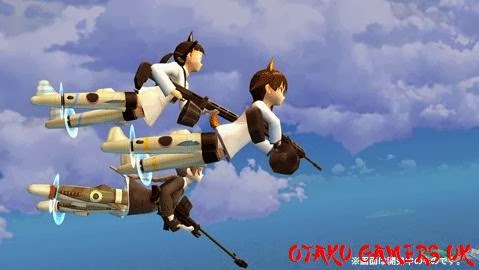 The gameplay is your standard shmup afair as you know, screen scrolls from left to right and you have to ensure you survive through to the boss at the end. Defeating the Neuroi by destroying its core wins you the level. With the release being on PsP you may instantly be a little concerned as to how things may play out, but rest assured a few worthy additions to the formula certainly makes things interesting. There are 2 control systems to choose. A 'Dual Style' gives you the familiar set-up of analogue to move, face buttons control the direction of your gunfire & the D-Pad is used to tweak formation/magic etc (There is also another variant of the dual style thats pretty much the same with a few variations) Most will be drawn to this more immediate scheme, but I would reccommend a try with the 'Arcade Style' controls. Here the D-Pad/Analogue can control movement but all the important aspects of combat are designated on the face buttons. When holding square, you find yourself shooting in whichever direction you face, but switching to the circle button will lock your firing direction. This allows you to move freely around the screen whilst keeping your fire focused in one direction. It takes a little getting used to but once it clicks if feels like the better system to use. Switching up the formation (Theres 3 in total) in real-time also helps with the Arcade sheme as one splits your trio into 1 firing forward/2 firing backwards (the third has all 3 firing forward but in a 'loose' formation) Its a neat little system that helps a lot & also highlights the witches unique ablities as your designated leader will always offer a little something different to the other 2 in your trio. Your able to change the leader at will with just a push of a button, plus to round of things a little more theres also a magic attack you have access to once charged (your witch will glow when its ready) Unfortunaetly the magic attack doesn't do much in the way of damage but it can help to clear a few of those pesky opponents that will harrass you. I prefer the 'Arcade' system mainly due to it being the most versatile, once your used to it of course, as you can keep your thumb held down on circle & use the tipe of your thumb for the other buttons so your always on the attack while mixing things up on the fly. 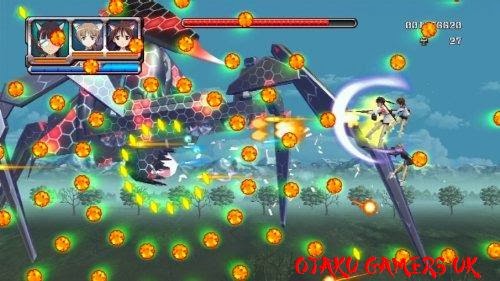 The first thing you'll notice as the game starts is that its using a 3D engine. This surprised me, mainly due to it being based on an anime series so I'd assumed we would be seeing a 2D scroller. Obviously the graphics are downgraded from the Xbox360 version, but they do still look good when put next to similar titles on the PsP. Characters are instantly recognisable, albeit a little angular (the first screenshot is from the 360 version - so just imagine things a little more angular and you'll have an idea), and the levels feature enough variety to not tire you quickly. The amount of onscreen enemies & effects will leave little time for you to appreciate the little details though. This game takes its 'bullet hell' tag to its heart (see the second screenshot) For the most part these effects look good, the witches shield looks spot-on from the anime, but they can also look a little amusing with the Neuroi bullets that look like bananas bringing a few chuckles. With amount of on-screen action and decent attention to detail its surprising that there is little to no framerate issues to speak of. There are instances of slowdown when you defeat a boss and they shatter into thousands of pieces, no doubt a little taxing for the PsP with motion blur applied at this moment too, which thankfully doesn't happen during normal gameplay so wont hamper your experience. The story is told with the usual voiced dialogue cutouts you find in most games that may come as a disappointment to those, like myself, hoping for anime styled cut-scenes reminiscent of the show. Luckily the story is voiced by the cast of the show which helps alleviate this woe somewhat and the cutouts are animated a little, sometimes having amusing expressions. The games presentation gets the job done. It looks good without looking spectacular which ensures buttery smooth gameplay during combat & the VA's returning to voice their roles ensures the game slots into the arc of the series between seasons 1 & 2 nicely. 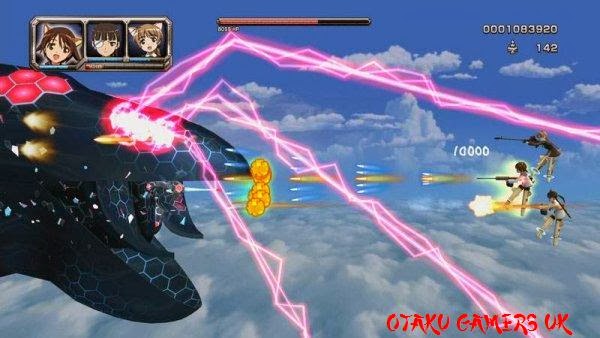 Conclusion
With a rigid structure, short runtime & unlockables that will do little to delight non-fans of Strike Witches seeming to take the sheen off what is a surprisingly good use of the licence, what it gets right for everyone else ensures its one to try. Fans of the series will find a game that perfectly compliments the universe while shmup fans will find a game with a good set of gameplay mechanics & a delightfully devilish difficulty to enjoy. Its not perfect, but the game cant be faulted for offering old-school gaming goodness wrapped in a universe that doesn't seem out of place with that gameplay. One for fans & shmup enthusiasts to enjoy, but it also may surprise others that give it a try

Footnote: No english patch is available for this title, but its easy enough to figure out & play. That also means the story may be difficult to follow for fans looking to give it a try for the story-mode. There is a little guide here that details controls etc, but Ive not found anyone that has translated the story. Worth playing for fans though, even if you have no understanding of Japanese. I also forgot to save the screenshots as BMP/PNG so they are at JPEG format, heavily compressed instead. Sorry in advance for the poor quality that entails.

Posted by Unknown at 16:27
Email ThisBlogThis!Share to TwitterShare to FacebookShare to Pinterest