Another review request that falls within our new Otaku Review section. What we have today is Toradora Portable. A visual novel based within the Todarora universe that has been fan-translated. Is it actually any good then?
Lets get the obvious stuff out of the way. I'm what you could call a n00b when it comes to visual novels. Toradora Portable is the first time Ive played through one in its entirety to be honest. Even when it comes to the show itself I'm not too familiar with it, only a limited understanding of what happened. The good news is that none of that has affected what Ive enjoyed about the title of the game. While the game is set within the Toradora universe, thankfully it features a spin-off or a 'what-if' kind of story which means you don't need to have the entirety of the anime locked in your mind to appreciate it. Some understanding is preferred, but its not required from what Ive played of the title. Now I'm going to try and to this with as little amount of spoilers as possible so I wont be explaining the intricacies of the story, sorry but that's not what my reviews are for. The game opens up with Ryuji waking up in hospital and after a tearful Taiga pounces on him, finds out that he has amnesia. SO the game begins as such with your main goal being to piece together Ryuji's lost memories by interacting with your friends. The story does intrigue and can keep one interested, especially for those who haven't watched the anime as you'll be in the same boat as Ryuji. Everything seems focused around an incident Ryuji has forgotten that happened on Christmas Eve & the two focal characters of that appear to be Taiga & Minorin. Both are wonderful characters so wildly different that you'll be constantly jumping between the two while you figure which to interact with the most (My favourite character though is probably Ryuji's mum, Yasuko [reminds me of Plutia, possibly same VA?]) Its also because of this that you may start noticing some issues, mainly the linearity of the narrative. For a game that has a lot of endings, you'll soon find most are centered around a few focal points in the narrative and only come about due to your failure to reach certain requirements with Taiga or Minorin to extend the story. For the most part these endings are good but they they do feel like a 'Game Over' screen at times due to not fulfilling certain requirements and there has been the odd one that just doesn't make sense within the arc of the story (*Spoiler* Opening an Italian resturant with Hisamitsu & Kouji left me thinking "what the frak just happened?") Aside from the games story mode, there are a few other little mini-games you can play in the Extra's section. A chibi Taiga side-scrolling fighter (pick of the bunch, but wont last too long), a breakout game and a card-matching game. On top of that there’s a BGM player, CG viewer, a Yasuko-themed clock, a list of all the items you’ve obtained while cleaning and Toradora! PSP themes. Not a bad amount of extra's. It will take a LONG time to 100% this game if I'm honest. While you may get the '100' point endings on your first few plays, You'll still have a long way to go to see everything the game has to offer. 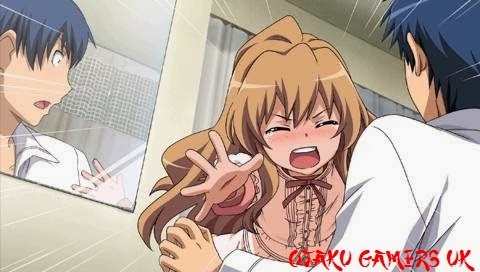 Now everyone knows that Visual novels are more for story than gameplay so this section of the review may be a little short. Luckily there are some things we could regard as gameplay mechanics, both good & bad, to discuss a little of. The main mechanic in play for the game is a hidden object point & click system. This comes into play on numerous occasions and certain items that are valuable for conversations later will be mostly gleaned here. It does become a bit of an issue though as you'll soon realise that a trail & error system will need to be employed. With each time the mechanic is employed, you'll find you have a limited choice to make. There could be 4 areas to check, but only a singular item of use that will help you past the next point (sometimes none at all!) Having to remember these sections to ensure you don't pick a useless item again can lead to frustration as you keep failing the requirements to pass the next focal point of the narrative due to not finding the item and having to start a New Game yet again (as the other editors know all too well - Sorry Guys) The social interacting though is done really well. Granted, its only a list of things to say that you choose from, but the immediate visual response as well as impact on how the character feels towards you is interesting. These sections can also effect the characters within the story, so its a shame that it isn't used anywhere near as much as the hidden object segments. Aside from those the only other gameplay segments would probably be when your exploring areas, I say exploring but its basically a linear path but it does give you the freedom to choose the order in which you alk to characters which can effect the story, and the minigames in the Extra's menu. Its really a shame the interacting wasn't used more as it could've helped with balancing out the, at times, frustration brought on by other mechanics in play. Still, a visual novel doesn't live & die by its gameplay mechanics. 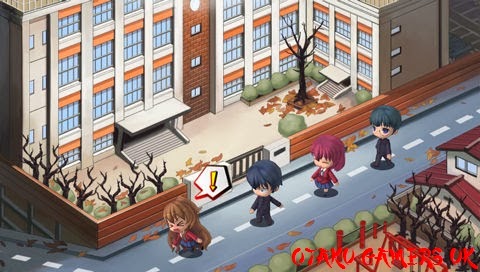 As you would expect with a visual novel, the games art is quite superb. From what Ive seen of the anime Id say it matches it quite well. The 480x272 resolution of the PsP though has absolutely no impact whatsoever on the clarity of the art. Its never muddled or blotchy and looks sharp & packed with detail with some nice animations to keep everything flowing nicely during conversations. The exploring segments tend to feature characters with a Nendroid/ChiBi style which does seem a little at odds with everything else, but the pre-rendered backgrounds for these sections look great. A little animation on them though would probably have been ideal as things can be a little sterile. Their seems to be quite a lot of BGM for this game though with each person you interact with having a 'theme' There are numerous tracks that can amuse and it would obviously be a crime to not mention the wonderful amount of effort gone into the voice-acting. Conversations are always fully voiced and I can only assume that the VA's return from the show to reprise their roles. In truth, there isn't really anything I can fault with the games presentation, aside from the slightly odd change in style, which all helps with keeping you engaged within the games narrative. 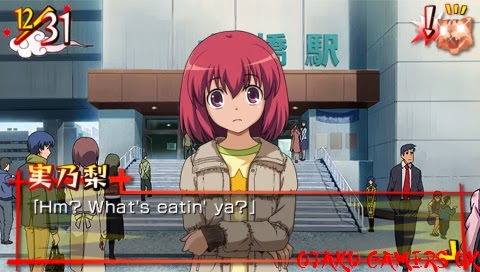 Conclusion
There's no denying that the lack of choice made apparent by a linear narrative at points & frustrating trail and error requirements due to the 'hidden object' mechanic employed can hamper your enjoyment of the game somewhat. Most issues could be overlooked though. The gameplay does have some great aspects (that are not utilised to its full potential sadly) with the story intriguing, forcing you to attempt multiple playthroughs & the characters are great to interact with, the main cast in particular are wonderful. Toradora fans have most likely already lapped this release up, but for everyone else I'd say it say it just about receives a recommendation if you are at all intrigued.

Footnote: Im currently on my 9th playthrough! While some may view the review as a little scathing, I have enjoyed the game but one must always try and remain objective on these things and I felt the score was about right when one views our scoring policy. Ill probably keep playing Toradora Portable on/off for a while yet so feel free to let me know how you get on if you do decide to try it yourself!
Posted by Unknown at 17:05
Email ThisBlogThis!Share to TwitterShare to FacebookShare to Pinterest