When playing a tower defence game have you ever given a thought about the poor characters that have to move through the tower littered maze that you have laid before them?  Have you ever though how difficult it may be for them?  All they really want to do is reach their goal.  Well, thanks to Anomaly 2, you now have the chance to experience what it is like on the other side.  This time the enemies have the towers and you are the poor foot solider that has to navigate your troops through to the end.  On paper it may sound like a complete mess but 11 Bit Studios has proved that this concept is something that can work.


Anomaly 2 is the sequel to Anomaly Warzone Earth, which again was a tower offence game and it received great praise due to its unique style.  We all understand the basic features of a tower defence game; you place your towers in a long winding maze to stop the opposing force reaching the end goal.  Enemies generally come out in different waves and they all have abilities which can be countered by certain towers.  Similar idea - hours of fun.  Well, here it is completely opposite.  You are a single solider that has command of a convoy of vehicles.  Your job is to guide them through the set levels to reach their end goal.  The end goal can be various things such as reaching a safe area or eradicated all enemies in a certain area.  Either way, if all troops die then it is game over!  If you just read this last sentence you would probably ask where is the challenge in this?  This comes from the enemy towers and reverse thinking.  Reverse thinking you ask? Remember the fundamentals of a tower defence; each tower has an ability to over come certain enemies.  In this scenario, you are the enemy (sort of) and each tower can either deal damage slowly with high power or quickly with low power.
For example, the first tower you come up against is your basic 360 degree rapid fire tower.  It deals low damage but it is always firing - so as you move past this tower type, you are constantly being damaged.  Many other different types of towers appear through out the game and honestly some of them are just a pain!  When you think you have the current set of towers worked out, the game throws in a tower which just loves what you are doing to get around the previous ones.  Seriously, the game knows how we all think - most towers will take a lot of damage the more you fire at it.  It is common sense but there is this one tower which loves rapid fire.  It stores the energy of that fire and when it is full it morphs into one bad ass tower which can destroy all your troops within a few seconds.  So yeah, the game can be brutal.
The key to victory is using your different vehicle types to over come each challenge efficiently. 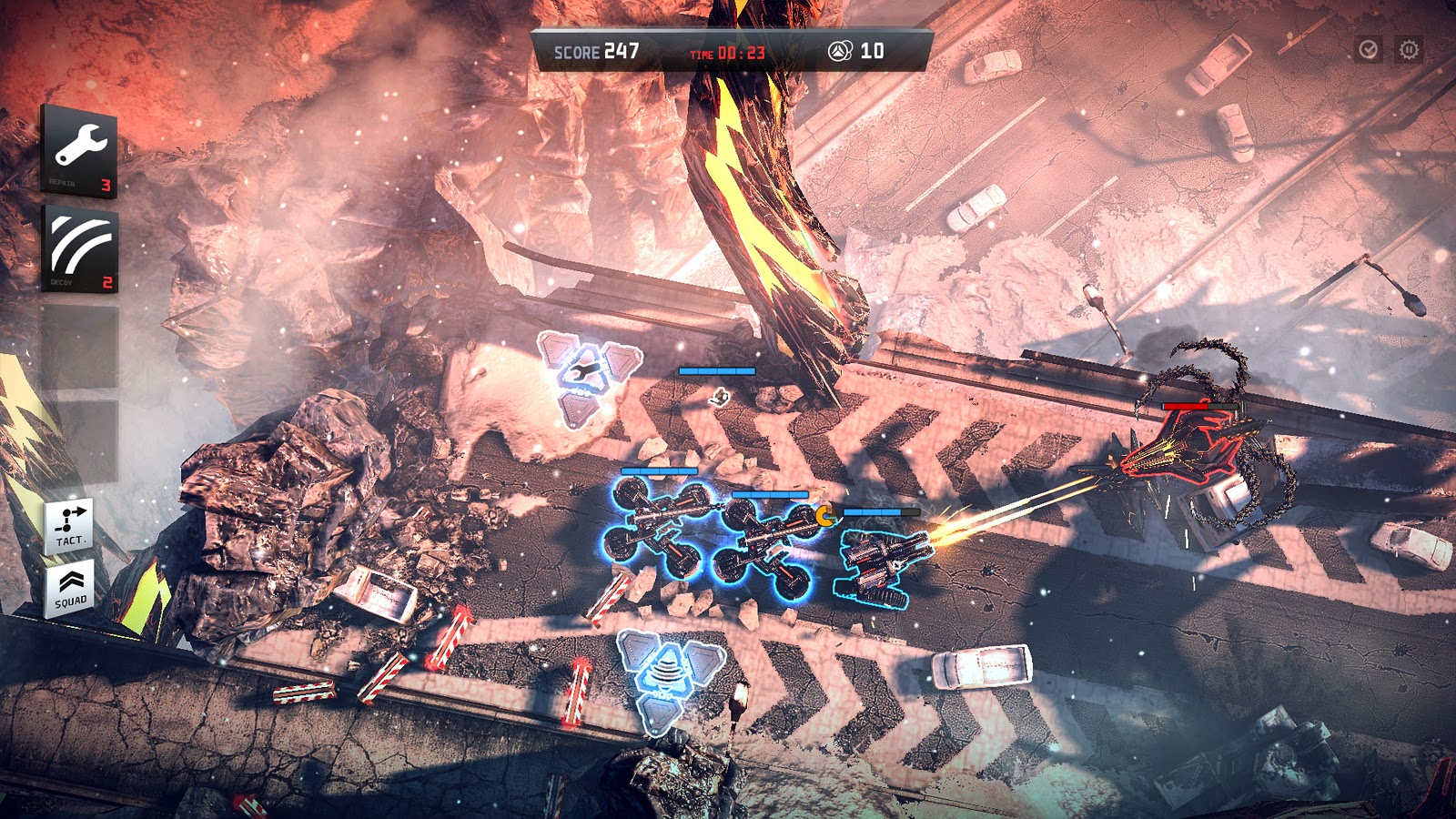 As the commander you are basically the cursor - you set up your convoy and choose the path you want to follow.  Each path gives you an ETA and shows you what enemy types you will face.  Usually the shortest path will have the worst towers on but if you are going for a swiftness gold medal it is something you will have to think about.  Sometimes the longest path with fewer enemies can be the quickest.  Again, it is all down to efficiency.  The path can be changed at any point during the stage so do not worry if you change your mind part way through.

The convoy is built up of various vehicles types and just like the towers they have weakness and strength. The first vehicles you are given is a tank which increases fire rate the more it hits, so these are great in paths which have a lot of towers.  Another tank is one which can only fire in a straight. line but deals a lot of damage.  As well as the primary fire each vehicles can be morphed into another vehicles with a completely different weapon set.  For example, the first rapid fire tank turns into a mech with two power flamethrowers - this is perfect for towers which are hidden behind builds meaning that you cannot fire upon them until you are in their line of sight. 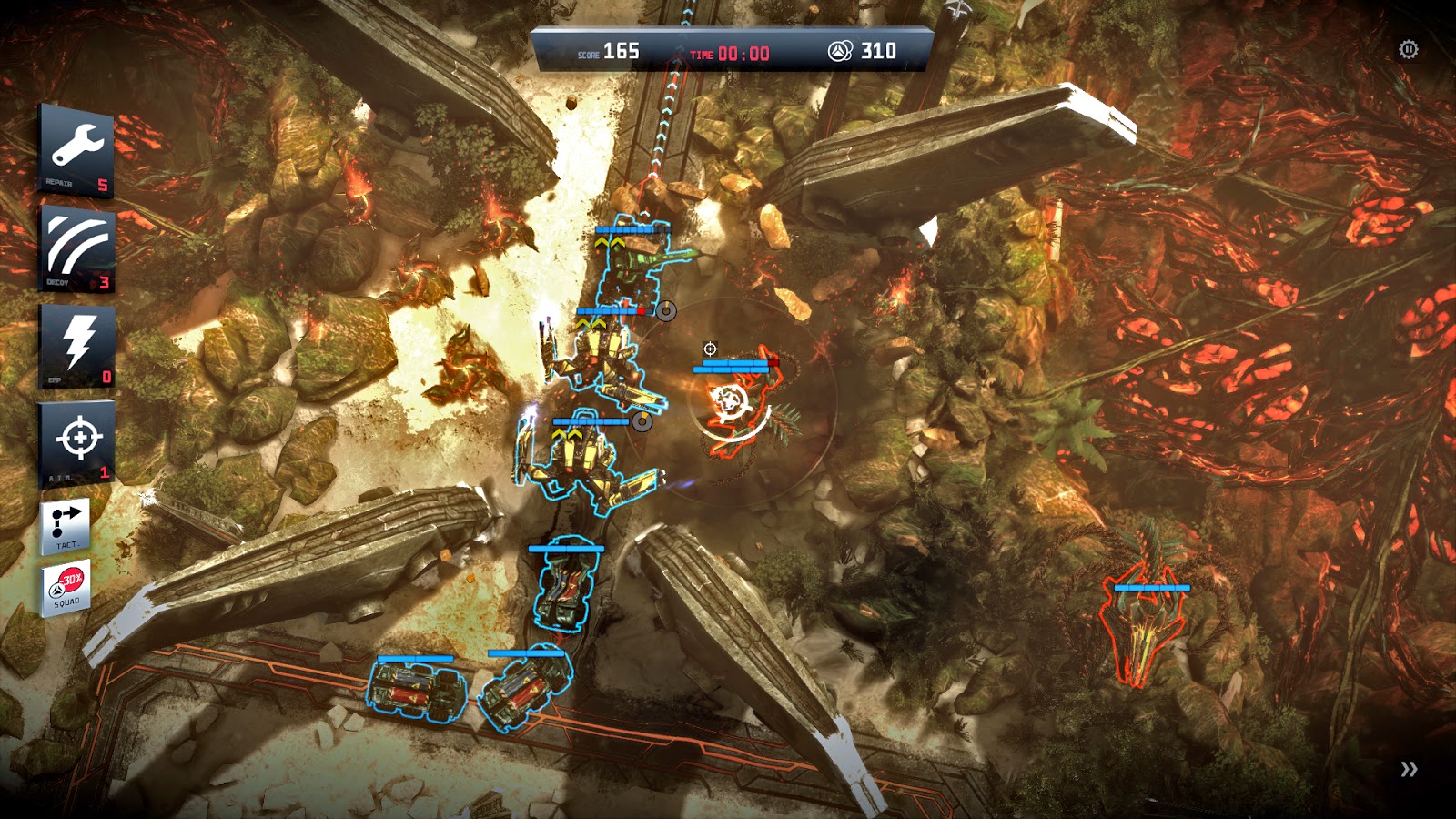 As you progress through the story you are introduced to each vehicle that you can use.  Each vehicle can be brought for the in game currency, which is found scattered around the maps and is also dropped by enemies.  Like other tower defence games, these vehicles can be sold to fund buying a more suitable vehicles to the current situation you face.  The buy back price is fair and can be done at any point during the stage.  Meaning that you can easily change your tactics on the fly if you feel like the current one is not quite working out right.  This is what a liked about tower defence games in the first place and it is really neat that the same features have carried over into the offensives party.  With some maps it can take up to 15 minute to complete and the game really does like throwing different scenarios at you - sometimes it is best to out all attack but other times you may be better off just getting through as quickly as possible without loosing too many units!  Your vehicles can be upgraded at a cost and you do see a significant difference but it is a risk to take - do you invest in your currentvehicles or purchase another one later?  Tough decision as you will see yourself loosing vehicles at some point during the campaign.  Do not worry though, as I have mentioned vehicles can be brought whenever you need them and as the commander you have a set off tools which can help your convoy through the stages.  The first tool you are given is the repair tool.  Like I have said vehicles can be brought but in your best interest it is better to keep your current convoy alive for as long as possible.  The repair tool is thrown on the ground on the path your convoy is taking and as they pass of it they heal.  The only issue I found with this is that it has a very short time limit so if you have you convoy at its maximum the vehicles at the back may miss out on necessary healing!  Another tool is the decoy - this is used to distract the powerful towers which you destroy you within a blink of the eye.  All very handy but they are limited.  Towers do drop the tools but they are at random and you may be picking up lots of decoys when you desperately need a repair tool.  I think they should of maybe put an option to buy these tools as during the longer stages you will be screaming out for they all the time! 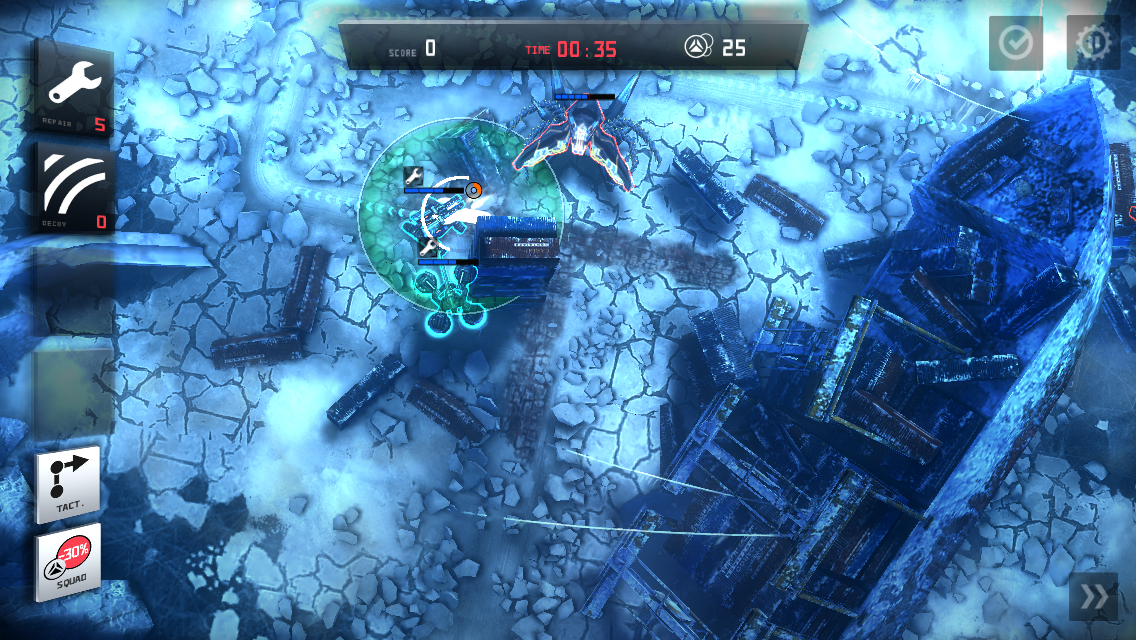 It is a lot to take in and the controls can feel a little awkward at first but with the helpful tutorials and a lot of practise you will soon get the hang of it all.  It takes strategic thinking and a lot of patience to master this game.

I believe the heart of this game is within the online community as it offers you to play as both sides.  You can either play with others over the Internet or even with a friend.  The only downside to playing with a friend is that it is not split screen - I feel they really missed out here.  Anyway, my original point is that at any time in which I tried to get online I was unsuccessful in finding a match.  So until I can get online I will not be giving the multiplayer a full review.

Anomaly 2 is a good idea for a new concept of gaming but it does need tweaking a little.  The, story reminds me of I would expect in a low budget Sci Fi film.  Do not get me wrong, it has a good steady progress which makes sense, it just does not feel exciting.  I found myself skipping some parts as I just wanted to get into the action.  The controls need modifying just ever so slightly.  I like how the commander is the cursor but during the heat of the battle you will find yourself loosing him as he is the same colour as the background! Also if your life runs out you have a 3 second re spawn - may not sound like much but remember some towers can destroy you rather quickly

Overall, Anomaly 2 is a good game and I would recommend it to hardcore tower defence game fans who are looking for something a little different.  You just need to overcome a rather steep difficulty curve and get use to those controls!  Once you overcome them you may find yourself pouring many hours into this title as there is a lot of replay value here due to the medals awarded to you on how well you performed.  Personally playing on the PS4, one playthrough is more than enough for me but it is also available on mobile and I can see this being a pick up and play title.


7/10
(preliminary score- multiplayer not reviewed yet)


Posted by Unknown at 16:05
Email ThisBlogThis!Share to TwitterShare to FacebookShare to Pinterest