A Sudden Urge To Sing! 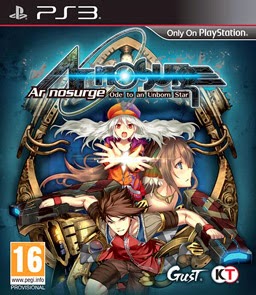 Gust & Koei Tecmo have recently been known for pushing out the brilliant yet marmite games Atelier, here they are with a more JRPG focused game for fans of the criminally underrated RPG series Ar Tonelico.
Acting as a prequel to the series to welcome newcomers as well as fans how will Ar NoSurge fare in a market full of JRPG goodness? Number 1 hit or 1 time wonder? 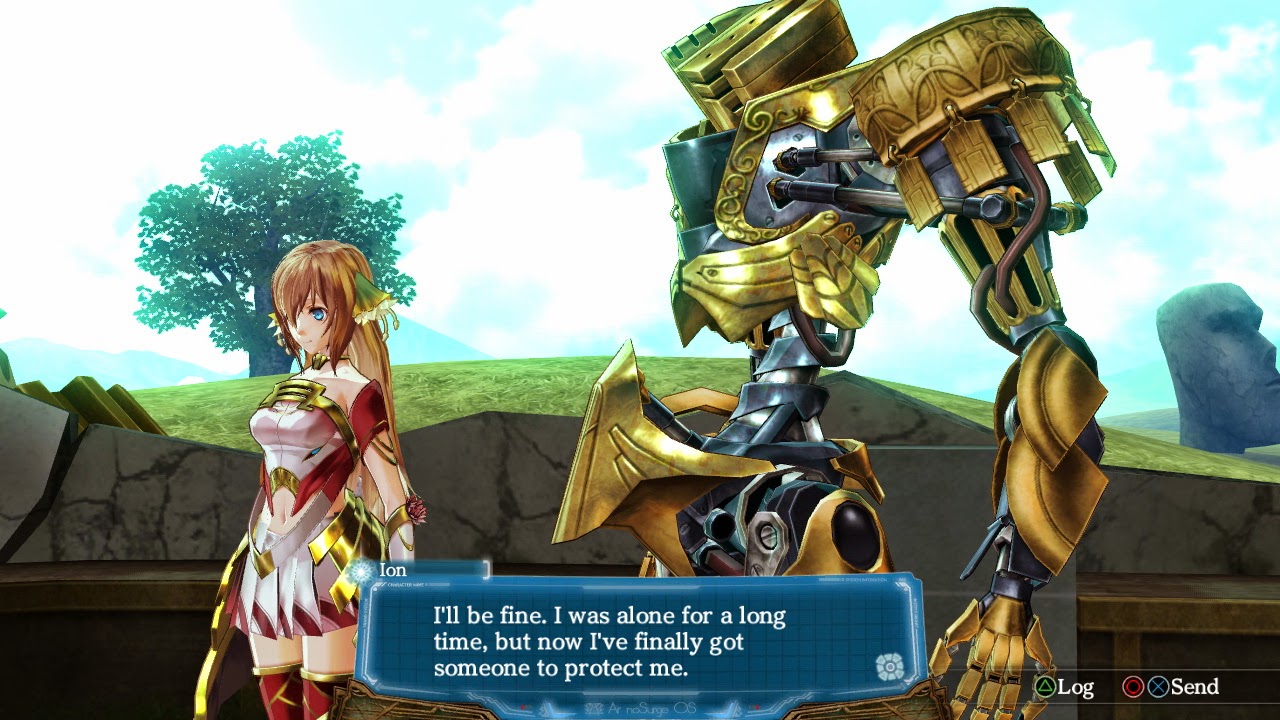 Set on a giant ship in outer space the story is kick started with the loveable duo of Delta & Casty, Delta being your typical lazy and often picked on main character and Casty the loveable Tsundere, clumsy and harsh on Delta. You are quite literally thrown head first into a confusing tale which will take a few hours for you to figure out what is going on,
Delta has -Mock shock- AMNESIA and is currently at what seems to be quite a scandal as you find out he nearly damned the city of Felion by turning down a barrier keeping out your mortal enemies the Sharl.

Delta is drawn back into PLASMA, the cities defence unit in a mission to find an old friend who knows a little too much about Felion. She's been captured by the Genomiral Church, allies of the Sharl wanting to convert every human into one for ascension to god.

The story at a few points is often confusing, bogged down with keywords and references to events in a previous game. By my last statement I have to point out the game is a follow up to a Japanese only VN style game called CIEL NOSURGE, though nothing game breaking happens in it there are still plenty of references.
The keywords all have a handy feature where you can read all about them by pressing Triangle, though it's time consuming you won't get half the story without doing your homework.

There is also the case of it having a 2nd set of playable characters, this causes the story to stop and start at given points, usually just when it's heating up. Also I have to point out that Delta & Cass are miles ahead of the 2nd set in terms of likability and character development.

The secondary cast aswell are all brilliantly written, especially when traveling in the field the mini conversations can range from discussing the item you just picked up, enemy amount, current event and even body odor. You'll also activate Skits during Synthesizing items which are quite amusing and shows some of the stronger points of writing.

Battle are intense and enjoyable, instead of have just a few enemy to fight you will fight waves of enemies you have a set amount of turns to beat as many as you can.

Battle screen is a side view your square, triangle, X and circle button all have a attack set to them as well as holding down the R2 which will give your burst move which will eat up your song magic that you built up from attacking the enemy normally.

Battles are a turn based affair, you choose your attacks some of which are numbered which allows you to combo them, here you have the chance to Break, this stops the enemy from attacking giving you the extra advantage. Should your enemy attack you have to time your defense, not only this but if the enemy gets 6 turns in the field you are booted back to the field map and have to face more enemies at a later date.
If you clear them all out within the turn allowance you'll see no more random battles while you are in that area giving you chance to explore.

You need to also build your burst gauge that will allow you to burst and chain up your attacks.

Your partners song magic is very important, you need to build it in level by fighting monsters when you have built of your harmo level up and then you hit start and select the song magic. There is also the use of Friend Abilities, though not initially accessible they will help you in tougher fights and are worth remembering (Also come with a snazzy anime cutscene) 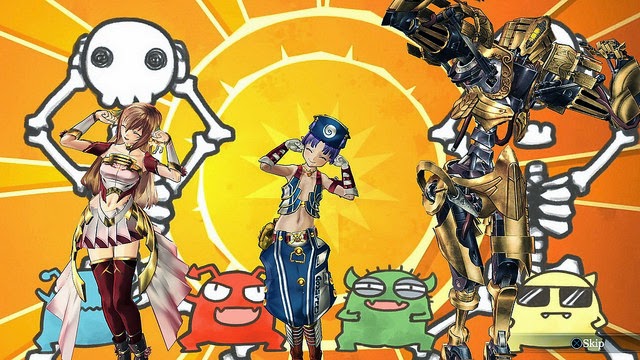 Graphically the game uses a Cell Shaded look much like the later Atelier games, this is a double edged knife as the main cast look and animate fairly well yet the NPCs for the best part are bleh. For the first 5/10 hours of the game it seems like the cast of sort of floating above the floor which gives it an unpolished feel but generally doesn't detract from the game too much.
Anyone who is familiar with Ar Tonelico knows that it has always had some really good music, the same applies here. The soundtrack is brilliant and keeps you plodding through the story, features some tracks from the original Ar Tonelico but what do you expect when one of the games major focus is music?.

Just something to quickly make mention as it's a guilty pleasure, whenever you synthasize something you get a screen like the above screenshot, the characters literally make a song and dance when creating your items!.
When using English Dub you don't get any lyrics so it's worth taking a trip to Japanese dub at some point to hear the songs with vocals.

Geometics are quite focal to your game aswell, to anyone coming in from Ar Tonelico you will know this as "Diving".
What this is in a nut shell is you access your Partner's brain, here you solve conflicts & experience different sides of your partner's emotions.This is all done via walls of texts and images, they are a mixed bag of interesting and downright confusing. To solve these you'll need to spend Dive Points which you get via battles, make the right choices and you progress the story and even sometimes get awarded gems.
The whole point of doing this is at the end of a story arc you'll be given another Song Magic to use in battle, these are devastating attacks so you'll want the very best, You are also given Gems which you can use to power the characters up.

Character development is also done via Purification, what this is boils down to the two characters taking a bath together and discussing life. It's strange but the conversations are mostly rewarding and the more you do it the more powerful your team will become so it's pretty important to the game. 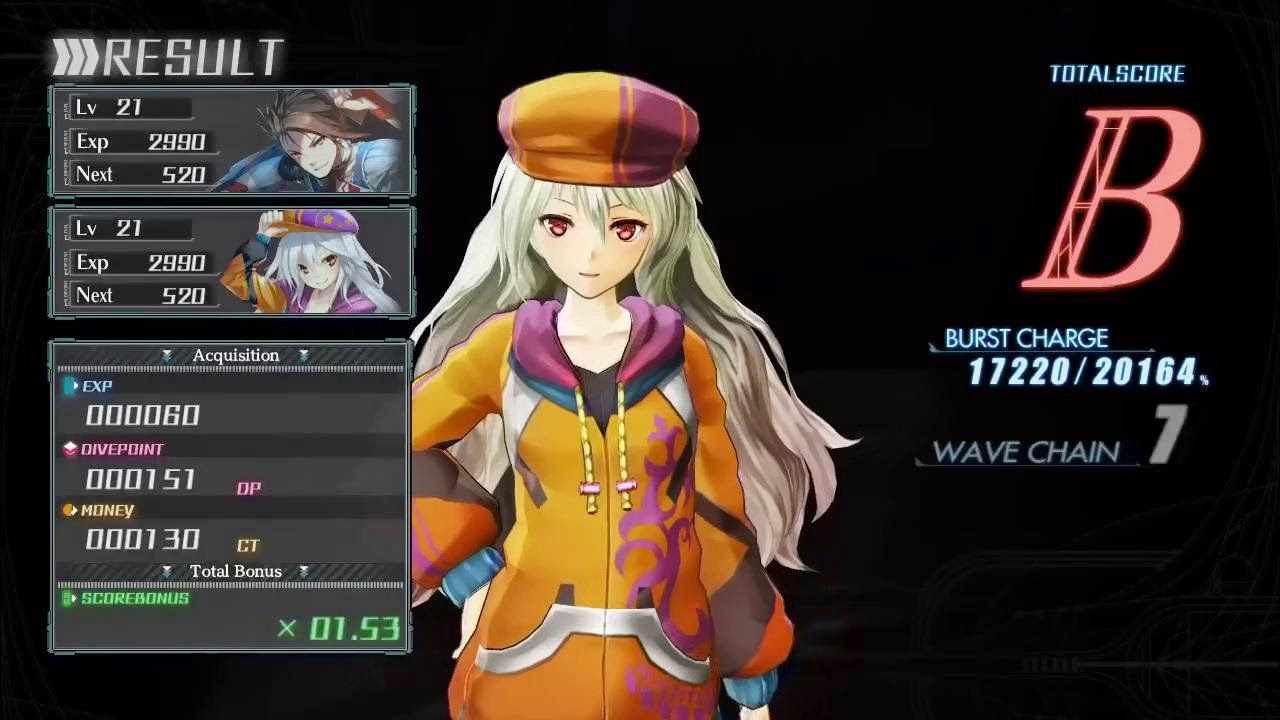 For what seems to be a game on a budget Ar NOSURGE provides you with an above average RPG experience, a little on the talky side for those who enjoy battling but the battle system and character development more than make up for it. There are a few typos and the animations cause a rather unpolished feel about things plus the at times strange pacing knock this title down a little. If I had to describe this I would call it the little RPG that could!.

[Editor note #2 - This review is originally a little different than when it first posted, the re-edit
was done by Andi for quality and consistency]


Posted by GundamNero at 16:08
Email ThisBlogThis!Share to TwitterShare to FacebookShare to Pinterest