News: The Legend of Legacy Coming to Europe Winter 2016 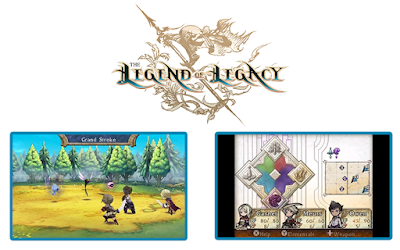 Today NIS America has announced that their newest IP The Legend of Legacy will be landing on 3DS in Europe some time in Winter 2016. It will also be coming in both a physical and digital release.


The details are mostly sparse but a little of the story, key features and an outline of the legendary development team are detailed below.


In The Legend of Legacy, seven adventurers—Liber, Meurs, Owen, Bianca, Garnet, Eloise, and Filmia—arrive on the mysterious island of Avalon to pursue their own agenda as explorers. They team up with two of the other adventurers to achieve their objectives—be it exploring the island for treasure, looking for the "god" on the island, or recovering lost memories. But things change when they discover a singing stone that causes the party to see phantasms of Avalon's forgotten history.

Seven Unique Perspectives — Each character in The Legend of Legacy has their own motivation for exploring Avalon, and their individual conclusion at the story's resolution. Play through as each character to see them all!

Combats Gets Classless — Managing formations to instruct specific combat roles instead of fixed classes adds a different level of challenge for battle enthusiasts.

Balance for the West — Based on user feedback following the Japanese release, several gameplay adjustments were made to enhance the gameplay. More details to come later!

Hopefully we will be able to fill you in on those details and new screenshots as they become available.
Posted by Unknown at 18:21
Email ThisBlogThis!Share to TwitterShare to FacebookShare to Pinterest