Deception is (not) the name of the game. 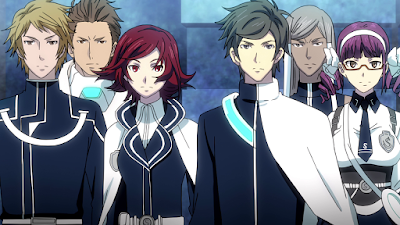 Lost Dimension is the newest Tactical RPG from Atlus, developed by LancArse and released for PS3 and Vita in the US on July 28th 2015 with a European release on the 28th of August. This review is based on a NA review code and the European release may differ.


Although officially released as a Tactical RPG, in reality it leans more on the side of being a Visual Novel with RPG sprinklings and fairly solid mission based gameplay. Unfortunately if I was reviewing this as it actually is it would be one of the strongest in its genre, however as I am reviewing it as what Atlus have claimed it to be, it does not fare quite so well, that is not to say it is bad as a TRPG. 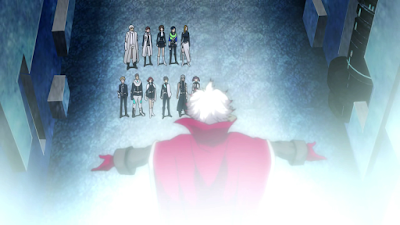 The story itself is a pretty usual affair, A guy calling himself “The End” threatens the world with devastation at the hands of an advanced super-weapon if he is not stopped in the next 13 days. Sho and ten other young psychic members of the SEALED team are transported into the construct The End is using as a hideout bereft of their memory and are tasked with reaching the top and defeating him. Same story, different anime so far, but this is where things get interesting with the teams lost memory and the games core mechanic when The End informs the team that there are traitors in their midst. Suspicion and mistrust runs riot within the team which is further played on as they find out to progress to the next floor, they must vote to eliminate one team member who they believe to be the traitor. For many stories this would be a point touched on a few times throughout the story but in Lost Dimension it is the absolute core that the rest of the title is built around, to great effect. 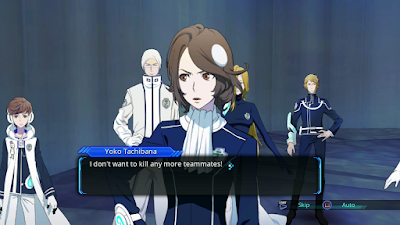 Most of the story is told through animated cut-scenes and visual novel style conversations. The most central story conversations are fully voiced and very well too. Where it falls down is the more optional conversations which instead of being fully voiced choose to repeat short sounds and phrases that repeat constantly, this quickly becomes a major aggravation. The characters themselves are an odd thing, they are mostly one dimensional embodiments of specific emotions which in many games would be incredibly annoying, yet in Lost Dimension they somehow have something very charming about them that makes them both memorable and enjoyable.


Gameplay itself is broken down into two distinctive but linked halves. The first being the mission based tactical gameplay, with the second being the search for the traitor on each floor. The tactical gameplay is pretty strong but flawed in a few key ways, you enter the missions and choose the locations of each of 6 members then take it in turns to move within a circle and commit to an action. These actions are fairly normal for RPG’s being your attack which come in ranged and close combat varieties, gifts, item use and wait a turn. There is an extra called Defer where you can pass on a characters action for that turn to another character that has already taken their turn that phase, this action is very useful, especially in conjunction with the assist system but it does come at the cost of the sanity meter (SAN) The only way to refill the sanity lost from defer is to use Wait which returns some SAN. 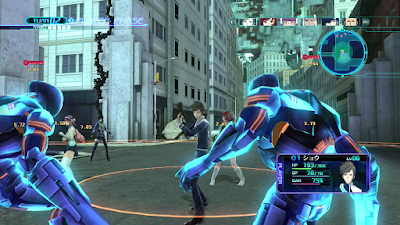 The assist system is really good and works for both your team and the enemy team, if trust is high enough between members and they are close enough when one character attacks, the other characters will join in. This is great for quickly removing single enemies as your entire team can potentially attack that enemy 6 times each during a turn, however the enemy team can also do the same so it is a constant see-saw of tactically setting up for maximum effect without putting team members in danger.


On the most part the AI works but it does have a habit of blindly rushing your team rather than considering possible tactical advantages. The biggest combat problem the game has is a certain amount of forced difficultly, the game deliberately splits your team up for many missions. Having only one healer (if he didn't turn out to be a traitor like he was for me on the 2nd floor in my playthrough) means that losses during a mission are often unavoidable, and when your team has all 6 together you are being rushed by 9 enemies with no chance to space out your team (During my playthrough the game decided this mission was the one to introduce confusion into the mix and my team was being attacked from both sides without any way to escape). This forced difficulty is clearly a result of trying to make the combat a bigger part of the game than it actually is and it just ends up with many annoying incidents and wipes. As solid as the combat is and features much more than most VN’s from a game trying to be a TRPG it ends up failing and feeling like little more than a means to an end where the AI constantly seems to be pushing a cascade failure of the mission. 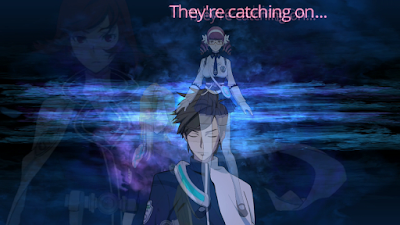 After each mission a short cut-scene plays where your character reads the minds of the members he did that mission with, this gives small clues to help you narrow down your potential suspect out of 3 suspicious voices for that floors traitor. There are many screens with data to help you make this decision and it is perfectly set up, this side is the strongest part of the game by far. Sadly it falls down when it comes to making your final decision because you are thrown into a very annoying mini-game where you have to follow the voice of the team member to find out if the Vision Point (a rare mission reward) you just spent confirms your suspicion or not. Even when you have found the traitor the game forces you to play alongside them, but with an amount of care as when the traitor is selected and removed a crystal is left behind containing the skills they had learnt so far to be passed onto another character as a slot-able item, but the reason you have to be careful is that during combat points are awarded towards a scoreboard, members with the highest score get the most votes in Judgement and also are able to influence other characters to vote with them. This causes the whole gameplay side of the title to be a very careful balancing act between maximising what dead members give to the team moving on and not making them so strong they take themselves out of the elimination to begin with. For the first playthrough the first traitor is the same as it is a tutorial floor, but after that it is randomised for each floor and after the first playthrough you can switch to New Game Plus and then all floors have random traitors.


The levelling up system is nothing particularly special with each team member getting an exp amount from each mission. Active members in that mission get more but inactive members also get a smaller amount. This exp in turn translates to gift points which are used on a separate screen to boost and unlock new skills. The available skills are separated into progression paths, these are fairly linear with very few chances to deviate from a given path, but it does serve the purpose even if it doesn't allow high amounts of customisation. Equipping new items to the characters again is fairly standard with the exception of the crystal remnants of eliminated team members which each remaining member can slot two of. 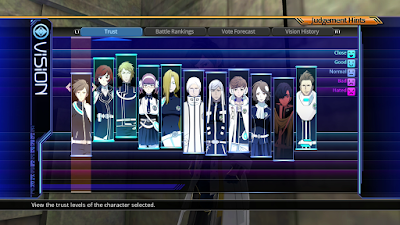 Moving on to graphics it is very much a mixed bag. The cut-scenes and conversations are all very sharp and good looking, but when in missions the graphics take quite a hit with mostly static environments and slightly sub par character models and animations, the exception being the gift animations which are very flashy, the biggest graphical problem is that even with this drop in quality there is still performance issues. These are minor but at the start of a mission or while spinning the camera there are often obvious stutters and frame rate drops. Beyond this the only issue I noticed during my playthrough was that the camera views the scenery as a solid object that it cannot see through or move around so quite often you will not see yours or enemy attacks because the camera is stuck behind an object. For many this will be a forgiveable issue but for me personally missing out of large chunks of the small amount of actual game-play really got on my nerves, none of these issues were game breaking though.


From a sound perspective Lost Dimension is very good with upbeat combat music, emotionally appropriate music for various scenes within conversations and very clear voice and combat sounds. The voice acting is to a high quality with many different voice actors instead of a handful doing many voices. 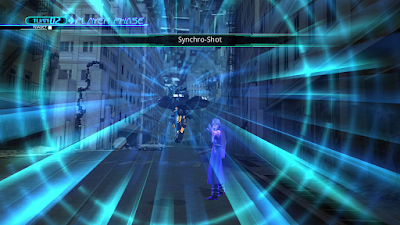 In conclusion although flawed in the most essential way for a Tactical RPG, if Lost Dimension had been released as a visual novel then it would have lead the genre and set a new bar for games of its type. That being said even though it doesn’t shine among it’s peers as a TRPG it is far from a bad game and flaws aside is deserving of most anybodies 30+ hour playthrough.

Posted by Unknown at 18:34
Email ThisBlogThis!Share to TwitterShare to FacebookShare to Pinterest