Some Pre-E3 information regarding the highly popular "sports" PS4 game, Rocket League, was announced a few days ago.


Along with the release date of July 7th it has also been announced that the title will be coming to PS4 and PC with cross play available!  As a tasty treat for PS4 players, Sweet Tooth & his Ice Cream Truck (see what I did) will be a playable character from the launch date. 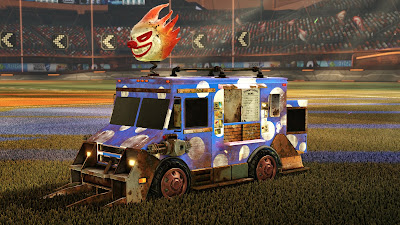 Unfortunately I was not able to get my hands on the beta but from what was spread around the Internet regarding this title it looks very promising.  If you are out of the loop though, Rocket League is a futuristic sports game where you control rocket powered vehicles to guide balls into the opposing players goal.  Basically it is football (or soccer as our cousins call it) for cars.

Intertested yet?  If not check out the below trailer for more of what is to offer.  Hopefully we will meet on the field upon its release!

One final note.  If any of our readers are lucky enough to find themselves at E3 this year, Rocket League is playable so please go and give it a go!

Posted by Unknown at 20:35
Email ThisBlogThis!Share to TwitterShare to FacebookShare to Pinterest