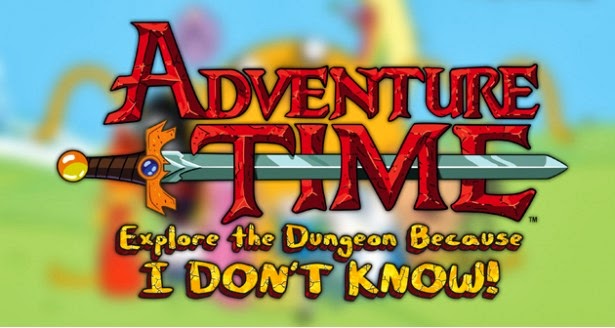 Adventure Time follows the adventures of Fin and Jake as they explore the vast world of Ooo. They come across bizarre creatures and fulfill epic quests. The world created is deep with content and the background story written is amazing. This alone should be enough to create an epic adventure game. But, as many TV and Movie adaptations have proved, the players are once again left short.
What we were left with is a poor, over complicated dungeon crawler which you will leave you scratching your head and wishing for a lot more. 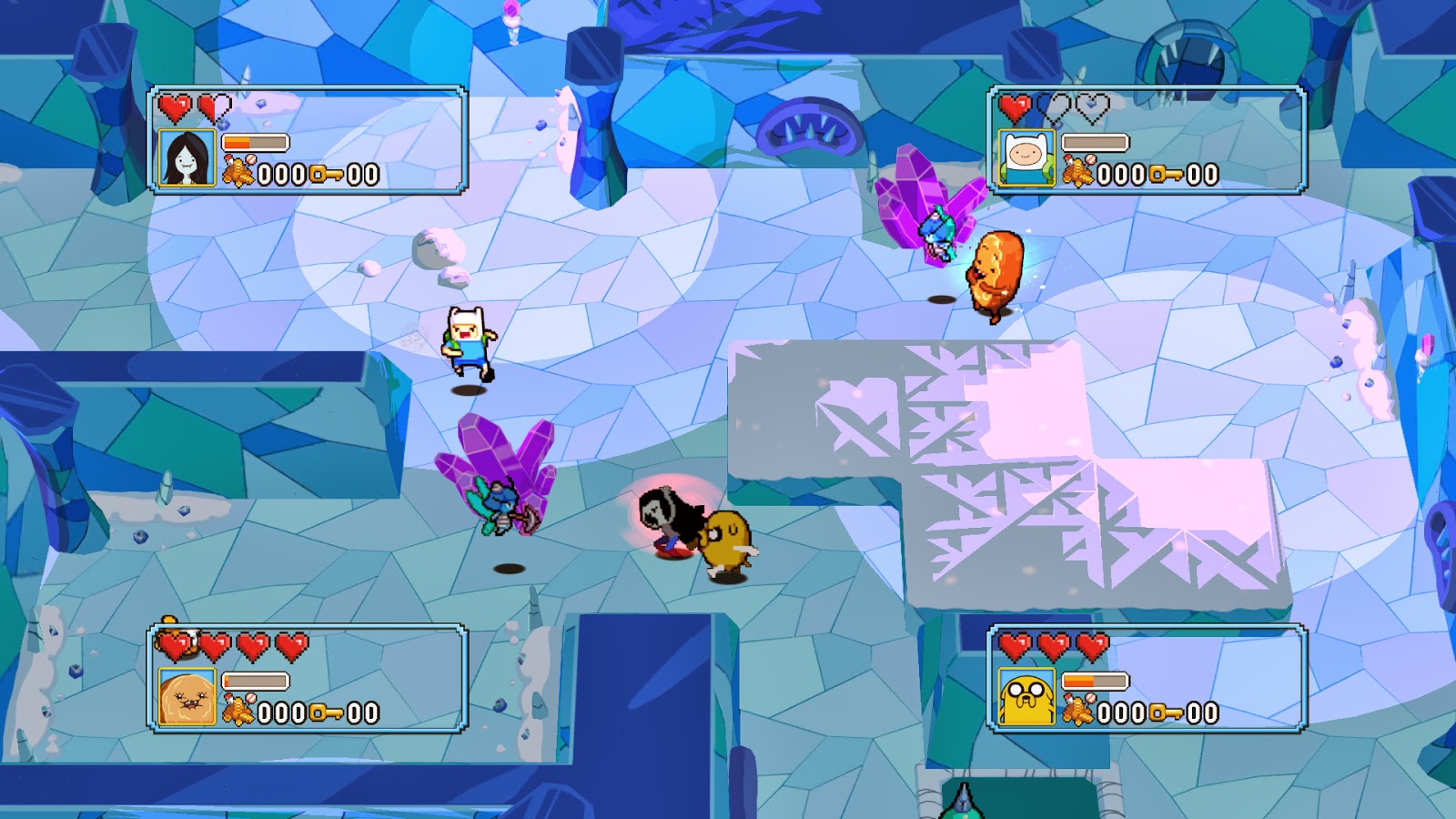 Adventure time has had many strange stories, which in turn evolve into a meaningful tale, but this story feels very forced. It feels like that the engine for the game created first and then they slapped the Adventure Time brand over it to sell it to the fans.
Over time you have assisted Princess Gubblegum in capturing enemies and storing them in the underground dungeons which go on for numerous floors (too convenient any for the genre type to be honest). The issue now is that all the enemies are escaping and it is your job to go down, floor by floor to defeat them all. A simple premise but it becomes very repetitive once you have cleared a few floors. I understand that crawling dungeons will suffer from this repetition after a period but you hit that wall very early on in the game and it does not get any better. For the first few hours I really enjoyed the gameplay and action, but after that, the charm wears of very quickly. The first issue which contributes to this is that there is no variety. This is the case for both enemies and environment. You will find that everything within each floor of the dungeon is very similar to that of other floors. There are really only three types of enemies; walking, flying and ones rooted to ground which throw projectiles. A disappointing thing with the enemies is that the world of Ooo is full of fascinating creatures and this game is very limited on who is in the dungeons. The dungeons themselves suffer from repetition. I know that you cannot have a huge variety when it comes to rooms or floors but a little bit of imagination would not go a miss. I found myself become that bored with the enemies and surrounding that I was just searching for the exit to the next floor. 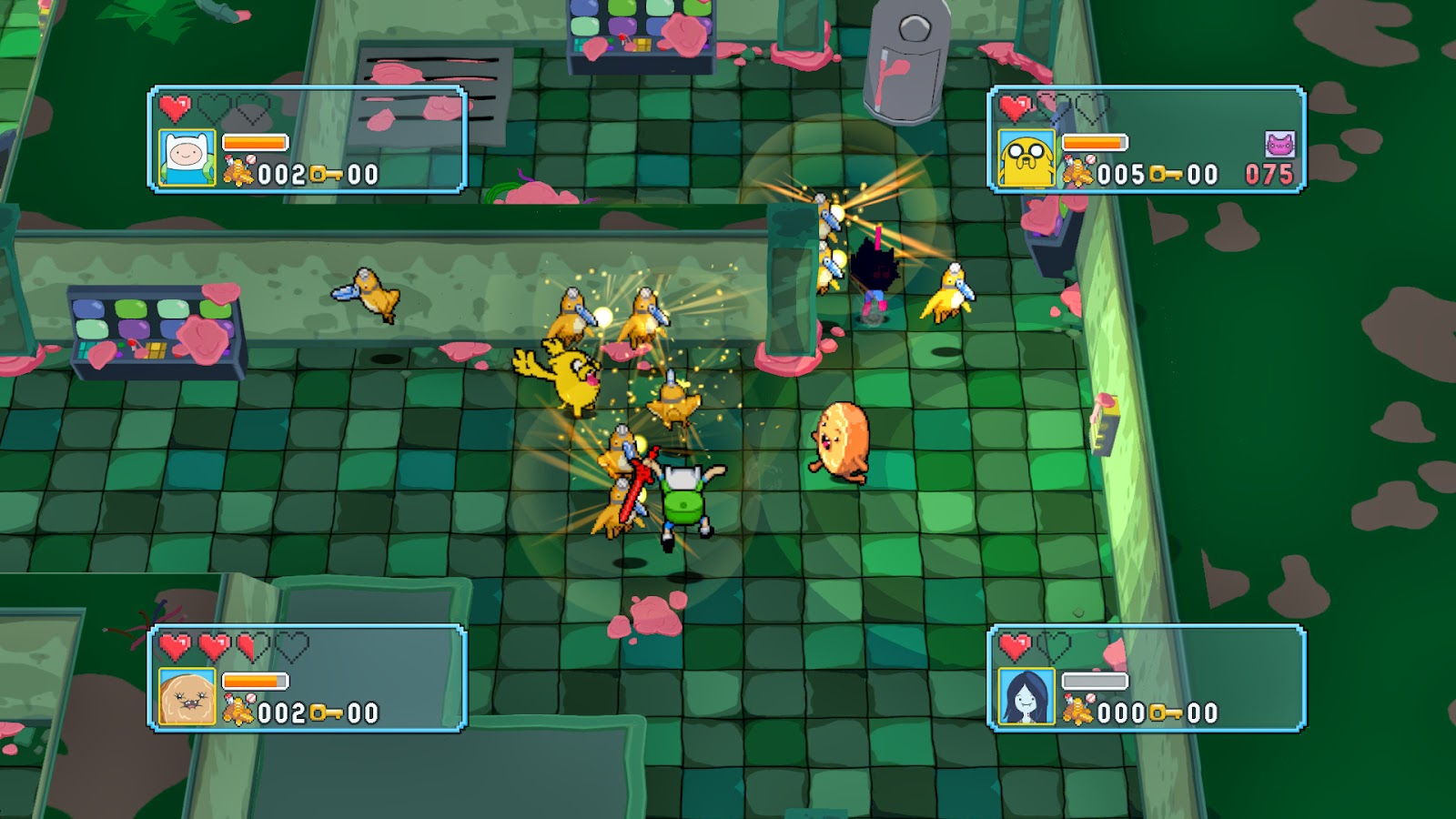 The controls do not help the cause either. It is a game where quick, précises combat a key. Instead of this you are given clunky unresponsive controls.
You battle through the game in a top down 3D world. You move across all axis but when it comes to fighting you will find yourself needing to stop first and then attack. If you move and attack, you find yourself "dancing" with the enemy rather than doing any significant damage. You can pick up secondary weapons but these suffer from the same issues. There are some projectile weapons you can equip too but these are hard work to use. This is a game where you only attack the way you are facing. So when you want to use your projectile, you stand still and aim. Easy to achieve with your basic moving enemies but with flying enemies (who dart around rapidly) it because frustrating rather quickly. 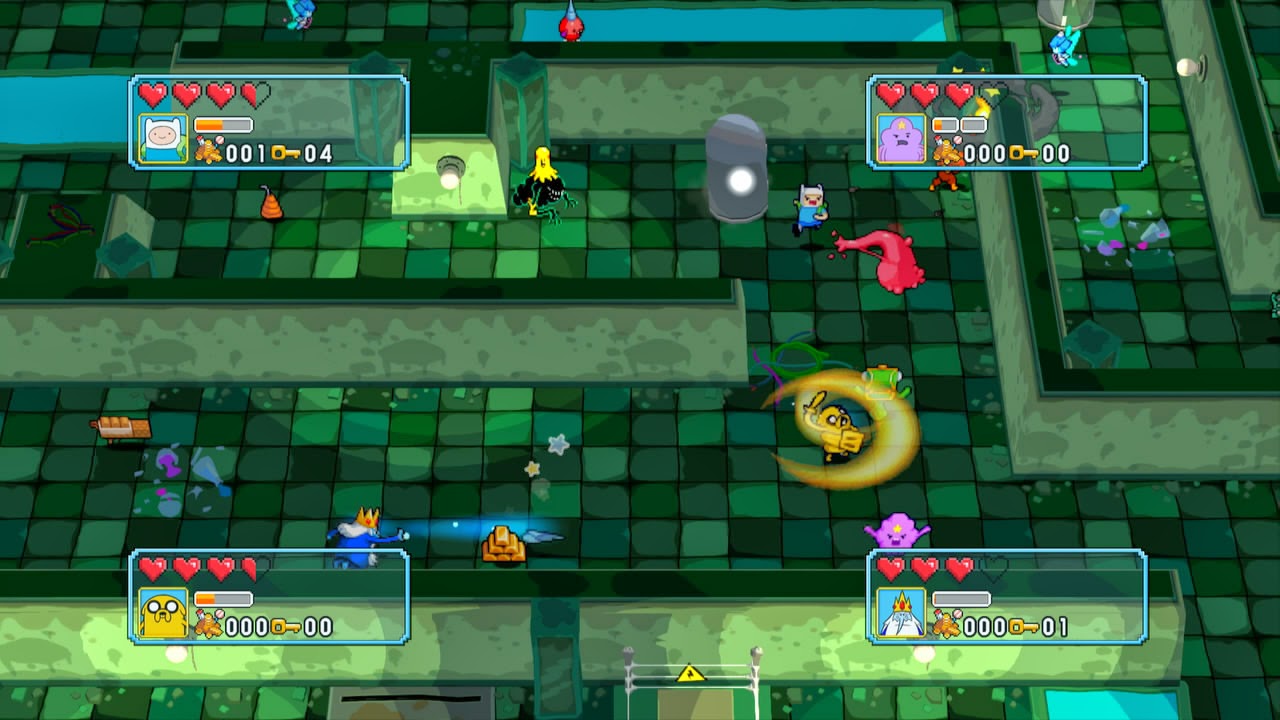 The block mechanic either does not work or it has a mind of its own. During the tutorial it too my far longer than I should imagine to compete it. I found myself not able to pull it off correctly any time during my journeys through the floors. As well as the block, the hit detection is flawed too. Enemies can easily hit you with no problem, but hitting an enemy is like hitting a piñata blind folded! Sometimes you will hit the enemy spot on first time & and sometimes you have to take a few swing at them. Let me mention that my position did not change whilst this happened.

The clunky controls do not stop there though. Even the basic movement around the dungeon has some hit detection problems. When you hit a wall in modern games the hot detections allows you to move around it or along it. In this game you just become stuck. I found myself stuck numerous times stuck on what seemed like a few pixels of space. For a modern game, this is ridiculous.

It wouldn't be so bad but there is a very distinctive pattern and then the game turns into a chore. Every 5th floor you can leave the dungeon, accept a new side question and upgrade your stats. But, your laziness will cost you. You collect treasure whilst in the dungeon which you can spend on upgrades and item when you return to the surface. This is great as the enemies do get tougher as you move down the floors. But there is a catch. You have to spend it all or you will lose it (to tax) when you back into the dungeon. Seriously, that is how it works. What the game encourages you to do is to stay in the dungeon for as long as possible and save up for that one item you desire (or in many cases cannot continue without!). This is the most difficult part if the game; seeing how long you can last until you put the controller down, walk away and never play it again. 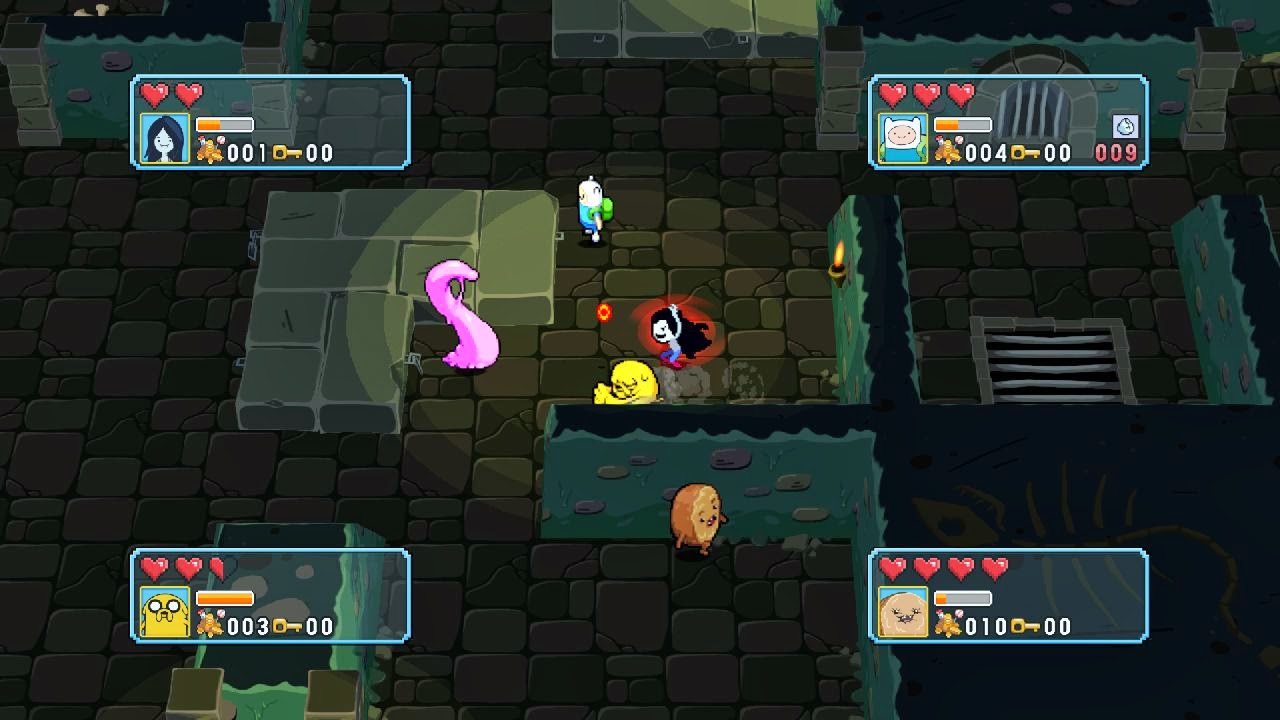 You can play the game with up to four players and this is where it got me thinking. Is this meant to be a party game? Is this a game where it is more fun when it has the maximum number of players?
This game is a great example of a good idea on paper but it was executed very poorly.

In between beating the boss at every 10th floor you will be rewarded with a fun cut scene. They are presented in an 8 bit scene, similar to that of the NES period. Here is the only pint that the fun and charm if the show shines through. The scenes are fun and have great sound clips from the shows voice actors. To be honest this is the only redeeming part of the game as it feels as crazy as the show but this does not carry on into the game.


This game is very hard to recommend to anyone. To the fans is a disgrace to what the show has created and it will put new fans off. It does not even give enough to please fans of the dungeon crawling genre. There are far better games available for them and this is not one of them. Best stick to watching the series.
Adventure Time is not the game fans are looking for, even not what they deserve. Even dungeon crawler fans will turn their noses at this disappointing title. With a nice 8 bit design and a good deal of voice overs, it still does not justify how bland of a title this is. It was a great idea but the charm was lost during development.


"Bad computer! No! No! Go sit in the corner, and think about your life."
Posted by Unknown at 11:43
Email ThisBlogThis!Share to TwitterShare to FacebookShare to Pinterest