Brains.... We all love zombies don't we?  With the popularity of the zombie genre, Dead Nation has arrived on the Vita at the best time that it could.  Dead Nation originally was released in 2010 and marked the beginning of the PSN store's refinement.  Developed by Housemarque and ported to Vita by Climax Studios, Dead Nation is an arcade shoot em' up that is pure adrenaline fun. 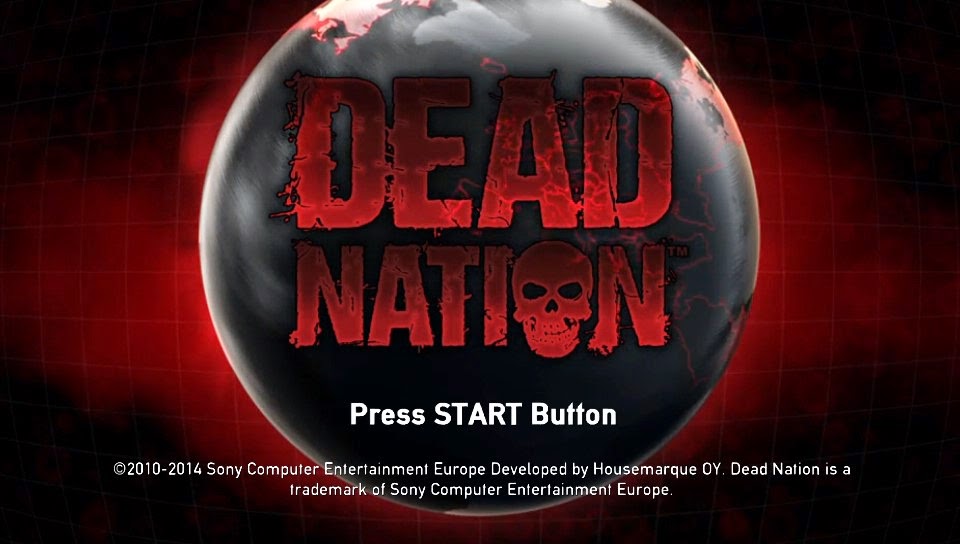 Society has collapsed and with most of the worlds population infected with a zombie virus, it's up to you to survive in the zombie wasteland.  The story follows Jack McReady and or Scarlett Blake, if you are playing in co-op mode.  Jack is apparently immune to the virus and has been taking shelter for over a year now but the time has come to begin the search for food and water as resources have become scarce. 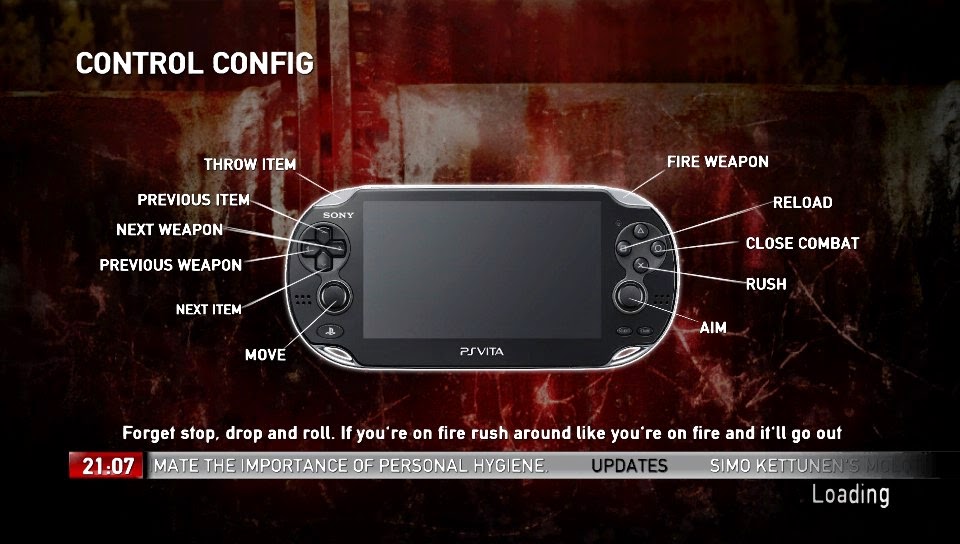 Now onto the gameplay elements, Dead Nation plays exactly the way you would expect the game to play like, an arcade shoot em' up.  You shoot zombies and you try not to get hurt, simple enough right?  That's what makes Dead Nation so good, the developers grabbed a simple concept and perfected it.  Your character never feels too fast nor too slow, the movement speed is just perfect.  You do slow down when you are aiming and trying to flee from a wave of zombies so be wary of that. The aiming sensitivity also feels just right, many shooters so far that make use of the Vita's joysticks have felt unnatural and floaty. Dead Nation has that advantage over the other shooters available on the Vita.

Dead Nation has 10 missions and each mission has around 5 checkpoints that have to be reached before completing a mission.  Each checkpoint has an item shop, after upgrading or buying ammo, the player gets their health bar refilled. Also at the end of each mission the player can stop playing and take a break without losing their score multiplier.  If you leave the game in the middle of a mission you will go back to the last checkpoint you reached but you will lose the multiplier that you built up so far. 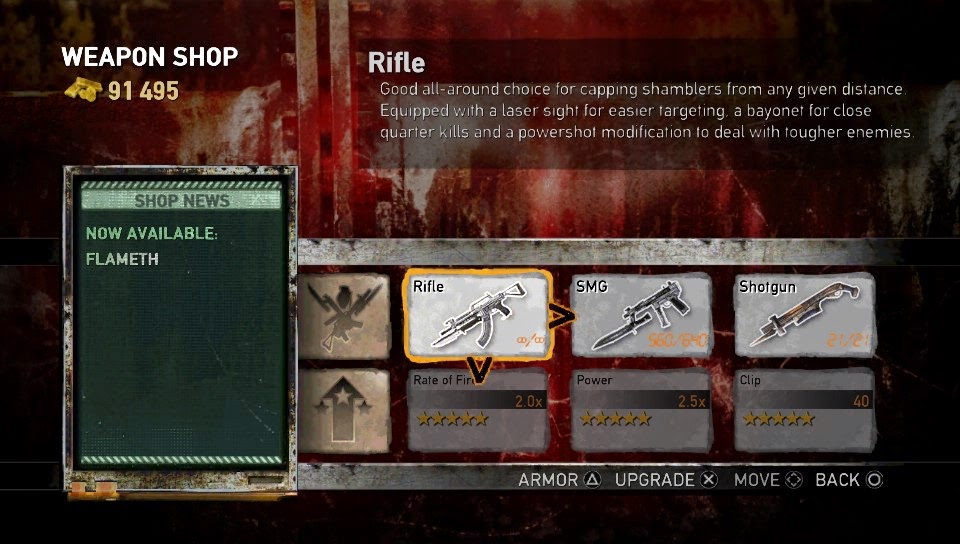 The weapons are what makes or breaks arcade shooters, so lets move onto the weapons.  Your default weapon is the Rifle and it is semi automatic. The other weapons that can be purchased are, the SMG, Shotgun, Flamethrower, Blade Canon, the Shocker and Launcher.  The way that the SMG, Shotgun and Flamethrower works is self explanatory.  Each weapon has their own function and are fully upgrade-able, keep in mind that the weapons are not customizable.  The Rifle is semi-automatic and has infinite ammo, as it is you default weapon. While the other weapons like the SMG and Shotgun have to be bought with in-game currency, so keep in mind that you will have try to loot for money as much as you can.  Any weapon that isn't the Rifle has limited ammo, so remember that you will run out of ammo and will have to default to your Rifle at any given time. The upgrade selections include, rate of fire, power, clip size and the amount of ammo you can carry. Bear in mind where you are in the game and what upgrade is most useful to you at whatever part in the game you are. The best advice I can give you is to fully upgrade the Rifle as soon as possible as it has infinite ammo and will be the weapon you will have to resort to after you run out of ammo with your other weapons.

The player can also carry special items that can be obtained in the weapons shop or as drop items from zombies, these items are very helpful in tight situations so use these items wisely.  These items include, Flares, Grenades, Mines, Molotov's, Dynamite Sticks, and the Auto-Turret.  The Flare only attracts zombies to the spot where the flare is set down for 5-6 seconds but does no damage.  On the other hand the Grenade, attracts zombies for only 2 seconds and eliminates any zombies in the blast radius. Mines are used for self defense, so if you are trying to hold down a checkpoint area, mines are best used here.  The player can also upgrade these items in the weapons shop but you can only upgrade the amount of each item that you can carry. There are also different types of armor that can be carried by the player but keep in mind that armor cannot be bought, new armor can only be obtained by finding special containers throughout the levels. So search each level thoroughly!

Just having so many different items, weapons and armor to choose from changes how the player can play through each mission is what makes Dead Nation so fun.  More arcade shooters could definitely benefit from having more options in game.  Now let's move onto the graphics part of the review. 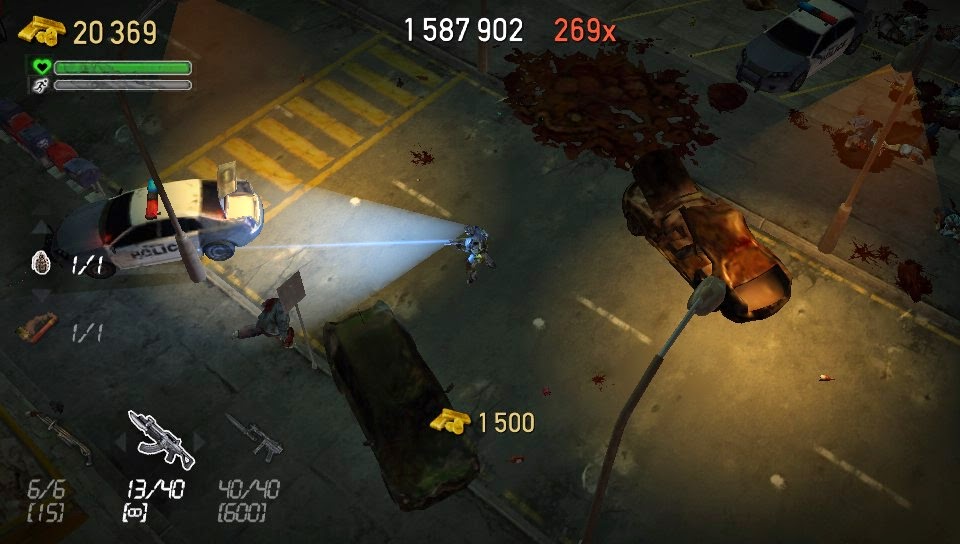 Now I can't stress enough that screenshots will not do Dead Nation any justice and the game looks very nice on the Vita's screen . Also if at any time you find that the game can get too dark you can raise the brightness levels in the settings menu at any given time.  I also apologize in advance for not taking any screenshots when I being ambushed by waves of zombies as it can be difficult to mow down zombies and trying to hold down the PS and Start button to take a screenshot.  The frame rate hardly drops even while being attacked by hordes of zombies.  I noticed that the frames drop when there are large amount of zombie bodies lying around so keep that mind.  There are also rare instances of frame dropping when playing co-op.  All in all, Dead Nation doesn't suffer from heavy frame dips like other Vita ports do.

Dead Nation is a fun game that is perfect for on the go zombie killing.  The game play is great and the graphics are also nothing to scoff at for a Vita game. I definitely recommend Dead Nation to anyone looking for a good portable experience or any hardcore zombie fan.  The difficulty also feels just right and the game controls well.  Road of Devastation, is Dead Nations DLC expansion that offers more missions to play through.  Dead Nation is available on the PSN store for both NA and EU Vita owners. Dead Nation does nothing new but it perfects what has been done already.

Dead Nation is available now on both the North American and European PSN store and also available physically at select retail shops. I can be followed on Twitter @GloriousBagel for any questions.
Posted by Unknown at 20:55
Email ThisBlogThis!Share to TwitterShare to FacebookShare to Pinterest