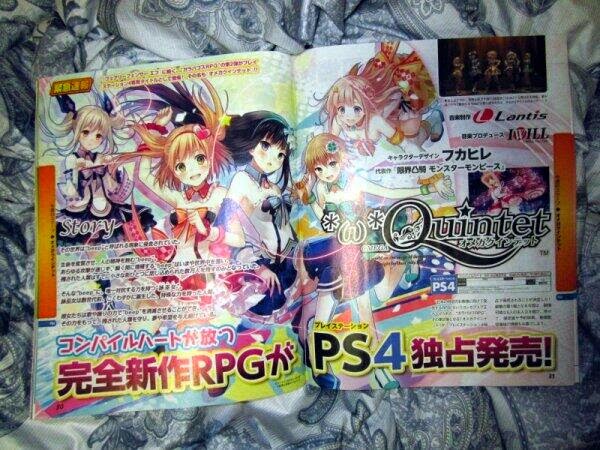 Compile Heart’s has been teasing their second title with the Galpagos brand for a week or so now.
This week’s issue of Famitsu reveals that it’s a game called Omega Quintet, for PlayStation 4. Thats right, we have our first RPG from a niche developer on Ps4 to start getting excited about. Omega Quintet takes place in a world that is being eroded by a phenomenon called “beep,” which has been degenerating the life of mankind by affecting their minds. The protagonist is a young lady who is some sort of “Verse Maiden” and happens to have the powers to stop the “beep”. While most details so far are a little scarce, the latest Famitsu issue does name  some of the characters and their voice actors in Otoha (Riho Iida,) Kyouka (Rui Tanabe,) Kanadeko (Inori Minase,) and Aria (Eii Yamazaki)

Omega Quintet is slated for release on September 18, 2014 for PlayStation 4.

Source [Siliconera]
Posted by Unknown at 11:57
Email ThisBlogThis!Share to TwitterShare to FacebookShare to Pinterest