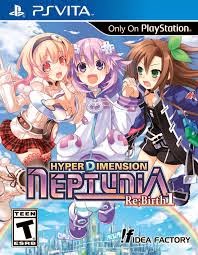 Hyperdimension Neptunia, the sweet heart of IF and niche gamers everywhere. The first title by rights should of been the nail in the series coffin, outstanding and amusing idea coupled with tiresome gameplay which sleep inducing battles would of meant death for lesser series but NepNep's charm shone through and as such the world has been blessed with a smorgasbord of Neptune related titles.
Though originally a PS3 title Nep has recently made her move to Vita with Producing Perfect & now with latest title RE:BIRTH1, complete remaking of the original title using the VICTORY engine. How will Neptune's original outing rate in comparison to the original and does it stand up against it's console titles?.

For those of you who aren't versed in the world of Neptune and Gameindustri allow me to indulge you, Neptune is based off the console wars that have dominated gaming, namely the golden years between the late 80's to Sega's demise earlyI 00's. Neptune herself is designed on a canceled Sega Console called Sega Neptune, She is the goddess of her Sega related piece of land in the world of GameIndustri.
Alongside Nep with also have Blanc, Noire & Vert representing Nintendo, Sony & Microsoft in that order, alongside these you also have characters like IF, NISA, GUST and many many more game related characters.
As you can tell already from this it's all tongue in cheeky and amusingly so, there is a serious story of sorts to be had with the game but it's minimal in comparison to the torrent of amusing dialogue and set ups awaiting fans in this title. The dastardly Arfore (really!) is pirating and undermining the godesses causing them to lose "shares" in their respective land and it's causing chaos, couple that with the godesses turning on NepNep to knock her out of a constant war it's all going a little Pete Tongue in Gameindustri.

What compels most fans to this series is the witty writing and comedy, Neptune isn't above pointing fun at all the amusing goings on around her, from her love of pudding to blatant fanservice nary does an Event fly by without someone mocking something. Instead of smashing the 4th wall it just simply isn't there for this title and honestly it works so well, a true credit to the writers at Idea Factory. 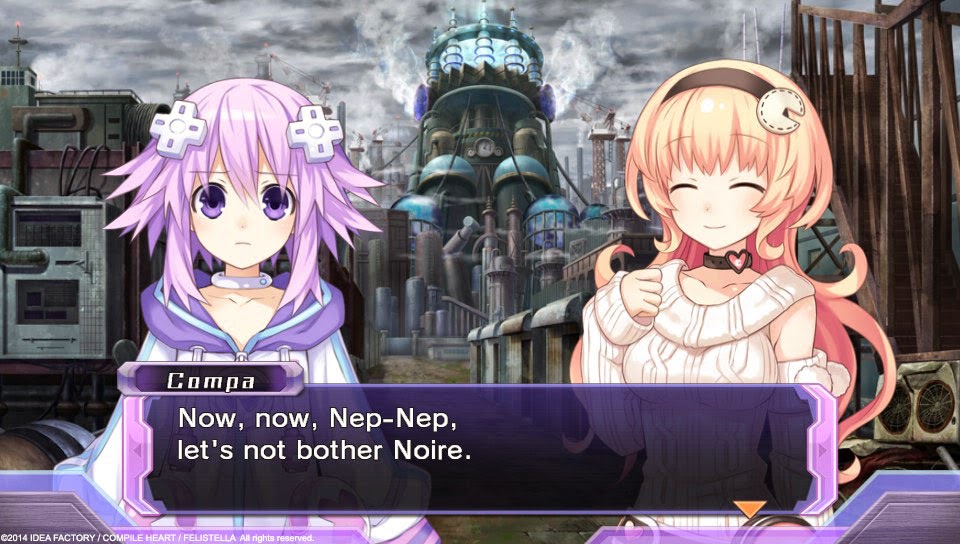 With this title you'll spend a good chunk of time reading, unlike the big budgets thrown towards Final Fantasy & the like Nep has to deal with a much smaller budget and as such cut scenes are quite sparse. Instead you are usually treated to a still picture depicting the action followed by Avatars of whomever is involved. Unlike most though these Avatars aren't static, they breath, move and react along with the script, it's not groundbreaking but it does help breath a little life into walls of text and stationary imagery.

As with all JRPG titles the writing is just half the game, the other half is the rush of dungeon crawling and battling a Noah's Arc style collection of nasties. This is something RE:BIRTH1 has an abundance of so you'll never come a cropper if this is your bag.
Firstly for the first time to my knowledge Idea Factory have managed to pull off a smooth framerate when on the field, this hasn't really been an issue but it's a vast and brilliant improvement now it's here. On the field you are treated to seeing where your enemies are, salvage points, warp points & colourful visuals. While on the field you can search for hidden items and attack enemies leading it into a battle, miss with your attack and the enemies gain a premptive strike & visa versa.

The combat in RE:BIRTH1 uses the VICTORY engine for it's battles also, for those unfamiliar with it you get free reign to run around in a circle arena, you have SP attacks which are like your magic attacks. Your standard attacks have 3 different varieties, rush for building combos, power for hitting harder at HP, Guard for breaking guards. The idea here is to break your enemies guard barrier and then pile on the HP damage, throw in a little combo to really stack up the damage and your golden.
The godesses all have the ability to HDD or power up if you will, this takes a percentage of your SP meter but makes them significantly more powerful and help out alot during boss battles and tougher monsters. 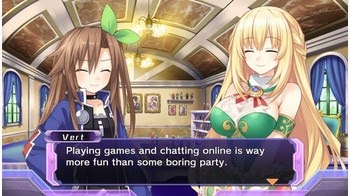 When on the field you'll notice there are different icons for some of the monsters, these are tougher monsters usually requiring more preparation and levels in order to tackle, should you slay these nasties you'll reap greater rewards.
Other ways to spice these up are using the remake system which I will touch upon in a second, using this system to can change the enemies, the drops and even unlock new dungeons for you to grind and empty.

The Remake system is something new to the series and is a nod to the fact that this game is a total remake of the first title. This system gives you some memory in which you can use to alter or remake the game to your suiting, be it add an extra dungeon, change the enemies, kill them by attacking on the main field rather than battle, create items & other quirky little changes really keep the game fresh and open up many avenues for you to keep playing. 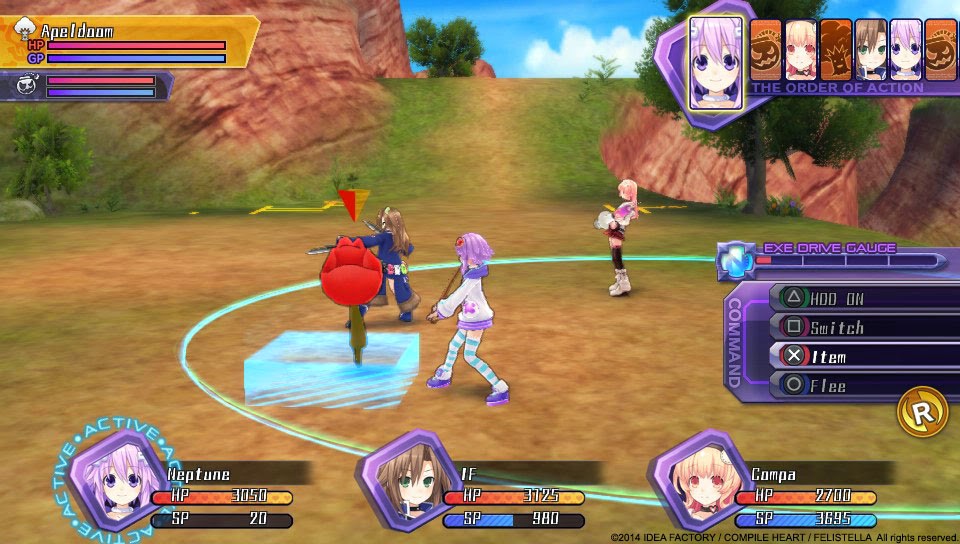 Unfortunately anyone familiar with VICTORY will notice that the dungeons tend to be VICTORY reuses with slight changes to the layout or in some cases just the enemies changed. Enemies are also rehashes from the previous game which isn't surprising but it's a shame to see the chance to freshen up the title going to waste. Infact the more you play RE:BIRTH1 the more you see that it seems the only new additions are the Remake system, the character models for the character and the writing. Another thing that has come over from VICTORY are the wild difficulty spikes, often stopping your progress flat and forcing you to grind and take advantage of the Remake system, I can see why it's done but it could of been performed out a little better.

There is something this title doesn't lack & it's charm, it's such a shame that be it a small budget or lack of vision keeps Neptune firmly planted within the middle ground of JRPG. It's not reaching the lofty heights of Final Fantasy or Persona but it's not a lesser liked title like the Agarest series or Trinity Universe.
REBIRTH1 is currently the tightest Hyper Dimension Neptunia title you can by, it matches VICTORY in visuals and content yet has the edge when it comes to writing.
It's not the easiest starting place for newcomers as it takes some liberties about if you have played a previous title but throw a little time it's way and you'll be defending Planeptune like the born goddess you are! 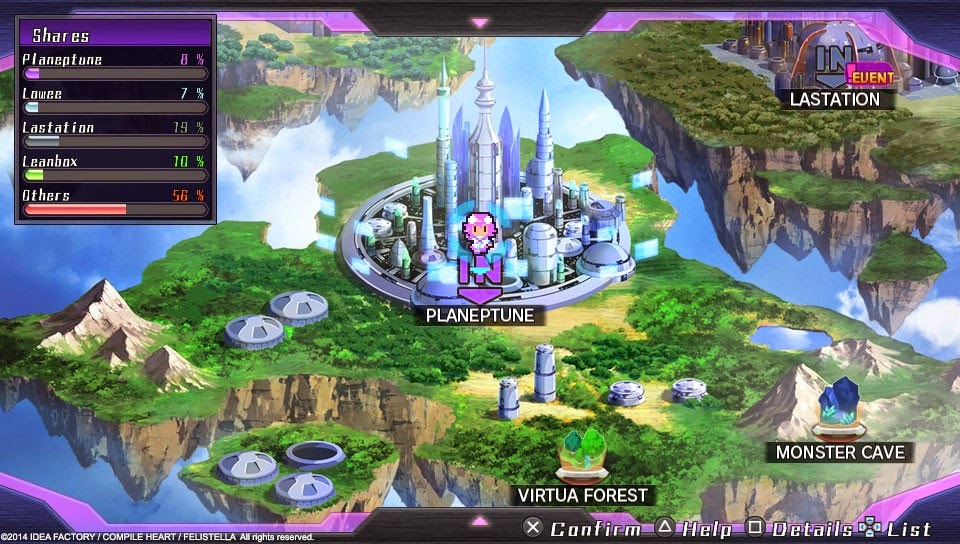 Posted by Andi at 09:40
Email ThisBlogThis!Share to TwitterShare to FacebookShare to Pinterest