As the Hyperdimension Neptunia series continues to grow in popularity, it was always going to be a matter of time before the other goddesses were going to get their chance in the spotlight. Which brings us to Hyperdevotion Noire. A strategy RPG from Sting gives the release a surprise variety to the main series as it joins the ranks of other spin offs trying new genres. Does this fare well compared to the stalwarts of this sub genre? Let's have a peek.. 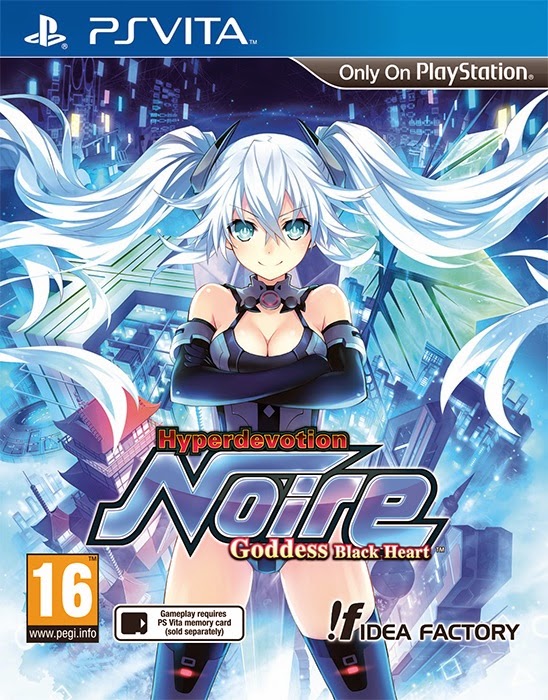 
The story for Hyperdevotion opens up with  Noire as she is coming close to her goal of uniting all of Gamarket under her banner. It doesn't take long for things to go wrong. Arfoire manages to convince Noire that there is a way to end the struggle and unite the world without anymore fighting. This turns out to be a bit of a ruse as it things take a turn for the worse when the share crystals are taken and the CPU's lose their power due to a lack of faith. Luckily your around to provide Noire with a little faith, as the story for this is played out from your perspective as you eventually take on the role of Noire's secretary(much to the ridicule of the other goddesses) With their power gone, the nations empty and the generals, who were under the command of Noire, begin fighting for control amongst themselves. The first couple of chapters are basically for party building, as the story doesn't start to open up till after that & your journey properly begins. In truth, the story is a little weak. This isn't helped by the abundance of dialogue compared to gameplay in the early stages and the fact that, to be frank, Noire just isn't as interesting as the other CPU's which hurts the narrative overall. Some of the new cast are even thrown in to the mix with very little in the way of back story. There are a lot of newcomers though, with most seeming to slot into the universe as though they were always there, so its hardly surprising. It's not uncommon though to see Noire being 'upstaged' by other CPU's,and even some Generals, during the story. Noire fans will revel in what's on offer no doubt as Noire is at the center of all things and there's plenty of screen time and fan-service moments for her. For those like myself (who aren't really fans of Noire) you may find she lacks the spark & charisma of the usual protagonist to help ease the storyline along. 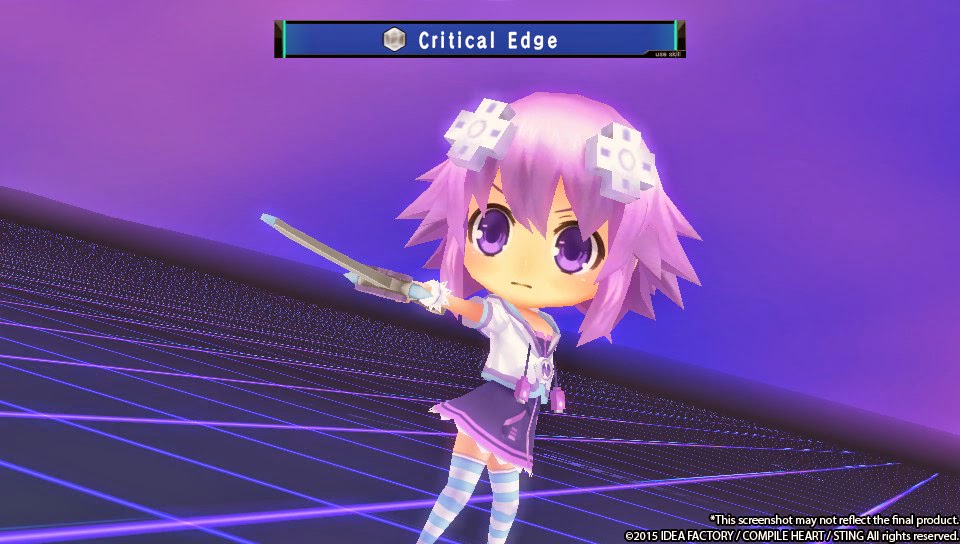 The games problems don't just end at the story though unfortunately. As the game is chapter based with a few story stages making up a chapter, it's not long till repetition begins to kick in. The story stages do pack some variety to them, but these are then rehashed constantly for some mission areas. The side missions are where you'll spend your time grinding, which is why repetition kicks in quickly, ad it's the only place to secure much needed XP & items outside of story segments. Difficulty spikes can hit regularly too at story missions, and not being ready means you'll be stuck in a loop till the battle is completed. Items don't carry over to the a restart unfortunately either, but any levelling up stays. A few tries will usually see you pass the more difficult missions. Outside of the guild battles, there's little else to do. Hyperdevotion lacks the combo customisation etc of the main games due to a switch to a strategy format, but has the item development system plucked from the main series. This is great for Neptunia veterans as crafting items & weapons is exactly the same, but those coming from other series may find the lack of item/weapon upgrading within this system to be a little limiting. Aside from crafting with the items found during battles from foes & chests, there's little else to do. The Basilcom has a feature that allows you to complete quests which unlocks new events to view, with you also able to decorate Noire's Basilcom with points earned when completing tasks. Noire fans will get the most out of this addition. 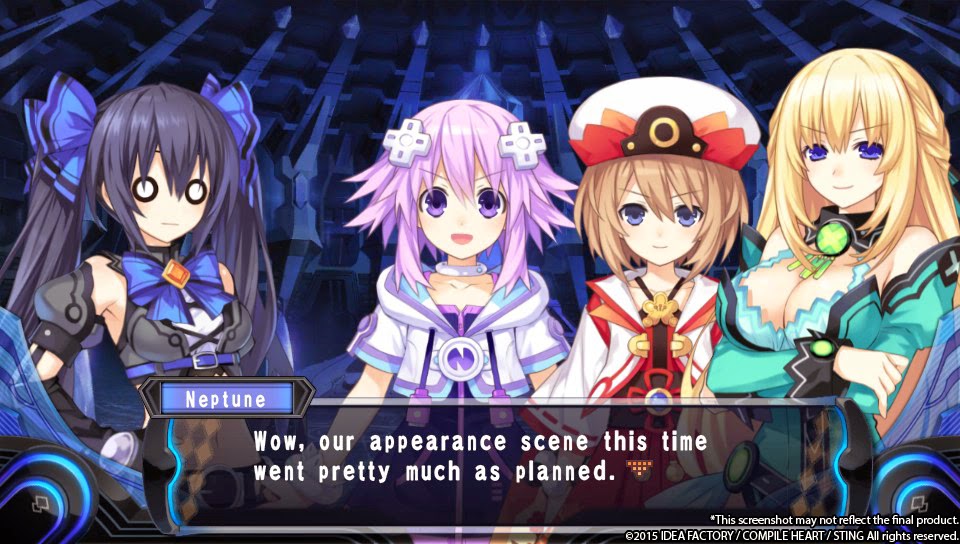 Things do start to pick up for the game once you've started a battle. The switch to a strategy RPG gives the spin off a different feel to the rest of the series and offers up a nice variety of tactics due to the stages. Those fond of games like Disgaea will be able to slot straight in and be comfortable with what's on offer. Each stage can have multiple tiers, traps and other oddities like lifts and trains to keep you thinking a few moves ahead. You'll begin by choosing who will feature in the battle (you may be able to add more during the battle which uses up Lily points) with your choice of a leader also provided your party with stat boosts. Variety is also added by each character having stats which offers varying ways they can have an effect during the battle. The lily system used sparingly in the main series is brought to the forefront in Noire's spin off. Similar to other games of this ilk, having another party member within the surrounding grids can have an effect on your current character. This comes in the form of a peck on the cheek, which reduces the amount of SP used during special moves and builds the lily meter a little. More surrounding allies gives more bonuses. Once the meter is full you are able to unleash a special move, which depletes the meter less with surrounding allies nearby, or bring in extra units if you've not hit the unit limit for the battle. A lift/throw ability also spices things up a little as it allows you to reach inaccessible areas and take more tactical routes via flanking and hit & run. The gameplay is most definitely the best aspect of the game. Its simple enough to draw newcomers in, with the added tactical diversions on the stages giving it a little more depth for veterans of the genre to exploit. 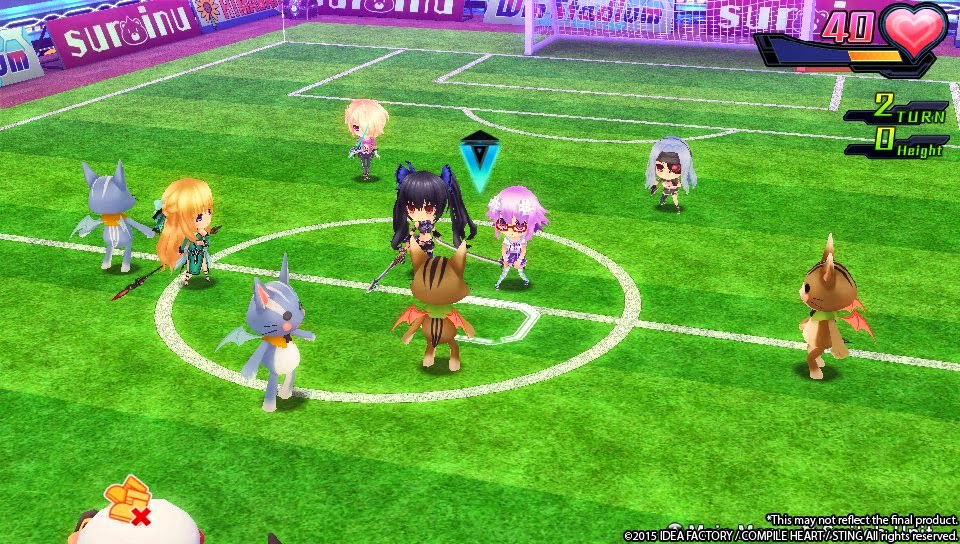 Another good aspect of the game is it's presentation. With the likes of Rebirth seeing the console releases ported to Vita, the games CG's and sprites look as good as expected. It's in the games redesigned style for the In-game graphics that the biggest surprise comes. The new Chibi style lends itself perfectly to the Vita as the switch to SRPG format also allows more detail to be packed into the Battlefield. Each level has its own quirks and visual cues to help improve variety, with some even having multiple tiers. It's with the character models that you'll see the biggest change, the Chibi offering a style vastly different to the CG's used during dialogue, which can be a tad jarring at first. Sometimes the Chibi looks cute, others creepy, but it's always fairly well detailed and each character looks as you'd have expected. I'd have to say the special attack sequences are the highlight of the game though,each unique and packed with special effects which also gives one a better view of the character detailing too. The games audio is ripped straight from the rest of the series, and it's of a fairly high quality considering the games 1.5GB file size, with even dual audio thrown in for those that prefer the original voice acting. Playstation TV compatibility is also available for those with Sonys diminutive device. The upscale works very well. Character CG's look fairly detailed, albeit a little soft due to the Vita's native resolution, and the stages manage to still look sharp and detailed with only minor aliasing. One of the better games to play on the device. Its a nice looking, and sounding, game overall as the switch to a Chibi style doesn't seem to have caused as much of an ire as first thought. 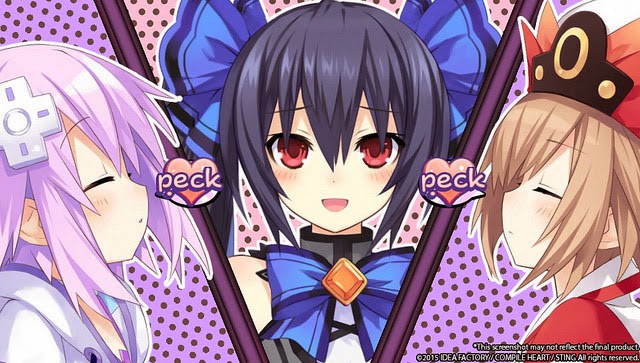 The gameplay lays solid foundations as it has enough tactical clout to give the game depth that is lacking elsewhere. The Chibi style too gives the game a polished outlook with the rest of the presentation following suit. Its a shame then that the narrative doesn't seem to have the usual spark of the series and the repetition is quick to take hold from the lack of variety elsewhere within the game. With almost nothing to do outside of battling, aside from the Basilcom feature with Noire, its a game best played in small doses. Fans of the series may enjoy it, Noire fans will love it, but its a missed opportunity to bring new fans to the series.

WhoShould Play This:
Who Should Avoid:

Posted by Unknown at 18:27
Email ThisBlogThis!Share to TwitterShare to FacebookShare to Pinterest