There be Dragons Here

7th dragon is a role-playing video game for Nintendo DS developed by Imageepoch and published by Sega in Japan on March 5, 2009. 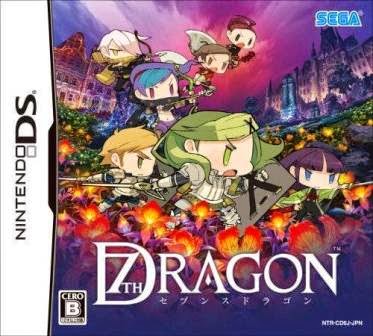 This game is like a wet dream for me 7th dragon is for all intent and purpose Etrian Odyssey in a more classic RPG format rather than dungeon crawler similar to that of the old school JRPGS, yet more polished. It’s a truly beautiful game that I came to love within the first hour, anyone familiar with the Etrian series will instantly recognise a lot of the features this game offers from the customisation options to the stores and the menus and battles but set in its own RPG world complete with world map, towns and dungeons. It’s a refreshing change from the dungeon crawling series that has clearly been it's main influence, a welcoming change of pace and offers something new, in essence offering the best of both worlds in fine balance to appeal to newcomers as much as old fans of the genre.

The story is typical RPG fare. You arrive in town seeking fame and fortune working for the guild, only to experience some misfortune and ultimately become the saviour of the world, in this case you start your journey to become famous only to be given a quest to investigate strange goings on in the world, odd plants growing in remote areas and monster going on a rampage ending in a 3 year coma! When you finally wake and find that the dragons have begun their all out assault on your world covering the land in the bloom and forcing humans on the defensive. The aim is now to rid the world of the bloom and the 666 dragons each of them at a sub boss or boss level and appearing everywhere, this is no small feat and reflects in the major difficulty spikes. This alone isn't all you have to look forward to as there are quests and material grinding to do to acquire weapons and ability’s you will  need to even stand a chance of fulfilling your lofty goal. I honestly just didn't want to put this game down as there is always something happening and something to do and you want to push on to find out that next little bit or get what you need for that armour.

Now we come down to the nitty gritty of all modern gaming, the graphics and yet again fans of the Etrian series will feel right at home, its almost identical in most aspects with the only real change being the world display. It kind of has a chibi art style look to it, something I have referred to as a polished version of older RPG titles on the SNES, it looks really good and works very well with the style.

The graphics seem to drop a little outside of the towns when entering the world map its not to noticeable but seem to be a little more well square for lack of a better word. This is the only real drop however small as the battles look nice and the towns and visual novel like text scenes look right at home. I have includes some pictures to give you a clearer picture of the world display as well as showing the Etrian presence.

The game offers a variety of options for customisation ranging from classes to new armours but the most useful is the standard RPG character system that allows you to spend points you earn from levelling up to spend on a verity of skills that  really make each character your own, as well as special skills that need to be unlocked in various ways. This offers many ways to play the game and allowing you to adjust to most situations with relative ease. The battles are mostly random encounters and they're not shy you will encounter them every few steps and can be a pain if you run out of healing items, not to mention MP is scarce especially in the early stages. Then there is the dragons that prowl the maps as shadow like monster skulls, defeating these lowers the bar and counter to inform you how many dragons are left and removing some of the bloom that covers the planet, a flower that bursts and drains your life as you walk on them and its literally coating the planet so prepare for some annoyances. The battles themselves are relatively straight forward, you see your opponent on the screen and have to select commands such as attack or using your skills learned through customising in order to defeat them, nothing particularly genre defining. The real challenge comes from the spikes in difficulty that if you’re not prepared for will surely kill you.

Ultimately this game is one that should appeal to all Etrian fans and classic RPG fans alike. It's interesting and provides you with a multitude of things to try and to accomplish as well as offering a challenge and a solid story. Honestly if I had to say it's one of the few times they took something that was good kept it core elements and then added to it. I am very happy with the title and will more than likely be playing it again before long as there is much more to experience. One thing I would like to see from this title is a UK release.

Posted by Unknown at 18:17
Email ThisBlogThis!Share to TwitterShare to FacebookShare to Pinterest