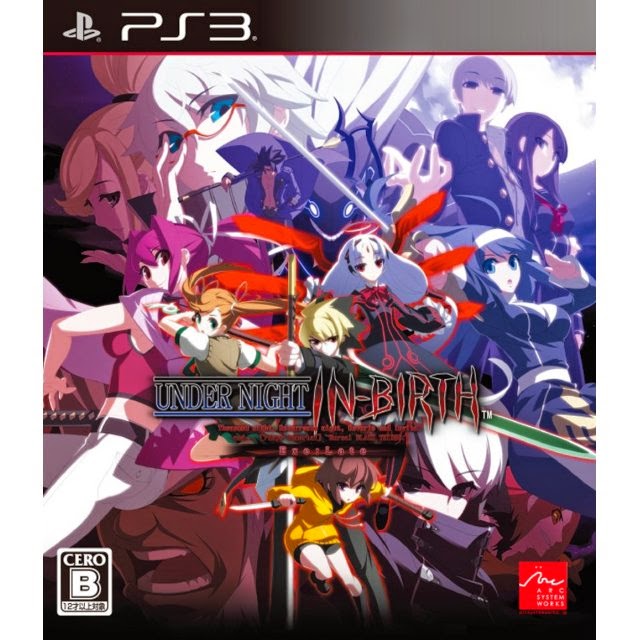 Note: This is a re-run of my previous review of the Japanese version of Under Night In Birth Exe: Late from Sept 2014. The only difference between the Japanese version released around then and the EU version available now is the addition of English text and voice acting, and as such the review still stands as it originally did.

What makes a good fighting game?

Opinions on this will vary. Some people say a colourful cast of characters. Some might say a variety of features such as a full story mode or even a Streets of Rage inspired affair. Perhaps a plethora of unlockables, concept art and other goodies?

For me, personally, the best kind of fighting game is one that gets the basics right. I’m all for frills and extra stuff, but when designing any one on one competitive game your core must be rock solid in my opinion. Chess, after all, isn’t exactly known for pin up art of the Queen piece or some ridiculous “Pawn Onslaught” mode, but rather because it’s a well-respected strategy game based around a cast iron foundation.

This brings us to Under Night In Birth Exe: Late, a recent console release from French Bread, makers of Melty Blood, who in a way that almost feels like mockery have foregone lace and fluff in favour of making a fighting game that is stripped down and devoted to making the fundamentals as robust and bulletproof as possible.

Under Night In Birth Exe: Late (hereafter referred to as UNIEL, which sounds oddly enough like a washing powder brand…) tells the tale of Hyde, minus a Jekyll because there are no pansies in this game. Hyde is your typical high school student, minding his own business, studying, honing his swag skills, the usual shounen tomfoolery, until a phenomenon called the Dark Hour Hollow Night and an attack by the creatures known as Shadows Voids leaves him in possession of a power called EXS, and he forms a partnership with Linne, a small girl with ancient secrets, and Waldstein, the man with the crane game arms. When they disappear sometime later under mysterious circumstances, it’s up to Hyde to find his friends and unravel the mysteries of the Hollow Night. 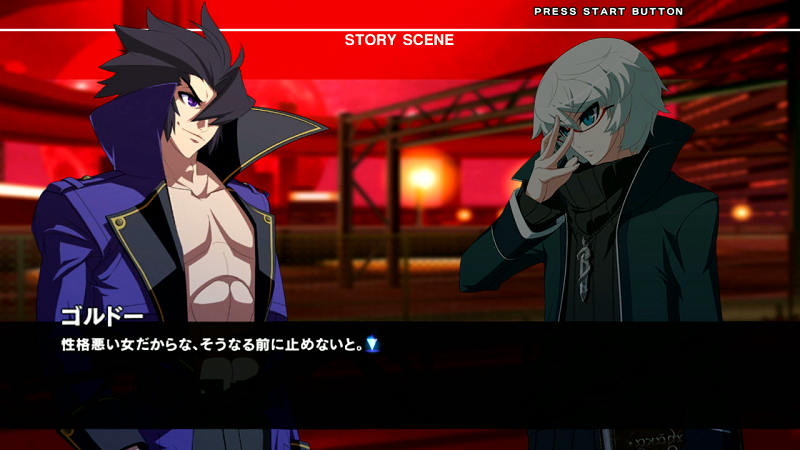 If there’s one thing that irks me about fighting games, it is often the undue emphasis some place on what can turn out to be a laughably weak story. Blazblue: Chronophantasma was no exception, with a story mode that clocked in at several hours of, what was to me, ninety percent pure nonsense. UNIEL, on the other hand, sets up the context with its arcade mode and allows a plot of sorts to play out there but has no dedicated story mode to speak of. While I suppose it’s not particularly right to praise something by its absence of a feature rather than provision, the fact that UNIEL doesn’t oversell its plot is a refreshing change and from what I’ve gleaned from the wikis the story seems serviceable enough.

UNIEL instead focuses on core features and functionality. There are your usual modes: Arcade, Versus, Survival, Time Attack, Training and Score Attack, along with a Replay Mode and Gallery/Palettes, but there isn’t much beyond that. There is no dedicated Story Mode for example, nor a Challenge Mode. The Training Mode in particular is fairly standard and doesn’t provide examples of combos or explain basic system mechanics. Not explaining these I would argue is a good thing as it forces players to experiment rather than being given often sub par or incredibly difficult combos as golden standards or failing to go into the mechanics in sufficient depth, but UNIEL also doesn’t include the frame data in game either, which is still something I want to see in more fighting games. I’d be remiss however if I didn’t mention that the Training Mode features a frame counter, which times your inputs and can be ridiculously useful for getting timings down on certain combos and attacks and it’s frankly a feature far more fighting games should implement. 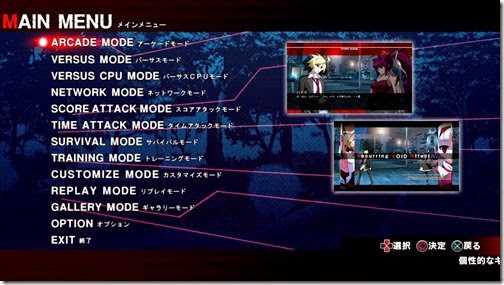 UNIEL doesn’t play like your average anime fighter either. Those coming from Melty Blood will probably feel right at home with the game but those coming from the likes of BlazBlue: Chronophantasma and Persona 4 Arena Ultimax may find the transition somewhat bumpy. Normal jumping for example is always done with a set amount of momentum and distance rather than super jumps or airdashes being the norm. As such, UNIEL is not a game I’d recommend for beginners since with the game's hands off approach new players will likely find it very daunting.

UNIEL’s main unique mechanic is the GRD gauge, which serves not so much as a tug of war but rather a race of sorts. GRD is generally obtained through offensive momentum and is consumed by defensive actions such as backdashes. Every so often, the player with the most accumulated GRD will enter a “Vorpal” state which confers several benefits such as bonus damage and access to “Chain Shift”, essentially a rapid cancel with a time pausing effect. Unlike BlazBlue: Chronophantasma’s Negative Penalty system, which operates behind the scenes in a relatively obscure fashion, the GRD gauge is a great example of a mechanic that drives players to play offensively rather than turtling up and also has clear and tangible benefits worth pursuing, yet it also isn’t so heavily decisive that not obtaining Vorpal state ensures your defeat in a round. Other mechanics such as Shielding, Veil Off and the like work similarly to Barrier Blocking and Bursts from BlazBlue: Chronophantasma but with a few twists that usually tie back into the GRD gauge or to the EXS (read: super meter) gauge. Also worth noting is that UNIEL works on a “reverse beat” system, in that you can link together pretty much any normal move back to back in a blockstring but will not be able to use it again later until you return to neutral, which is contrast to the gatling systems of other fighting games, allowing for more freeflow pressure. As a concession to beginners, there is also a “Smart Steer” system that works like Auto Combos from Persona 4 Arena Ultimax but with superior implementation as it does not grant above normal resources nor does it end in a super as a trap for the would be button masher. This all sounds daunting, and as I mentioned UNIEL is not for the faint of heart, but thankfully French Bread have released a number of tutorial videos (with some having been translated as well) and as always there are good wikis to review. 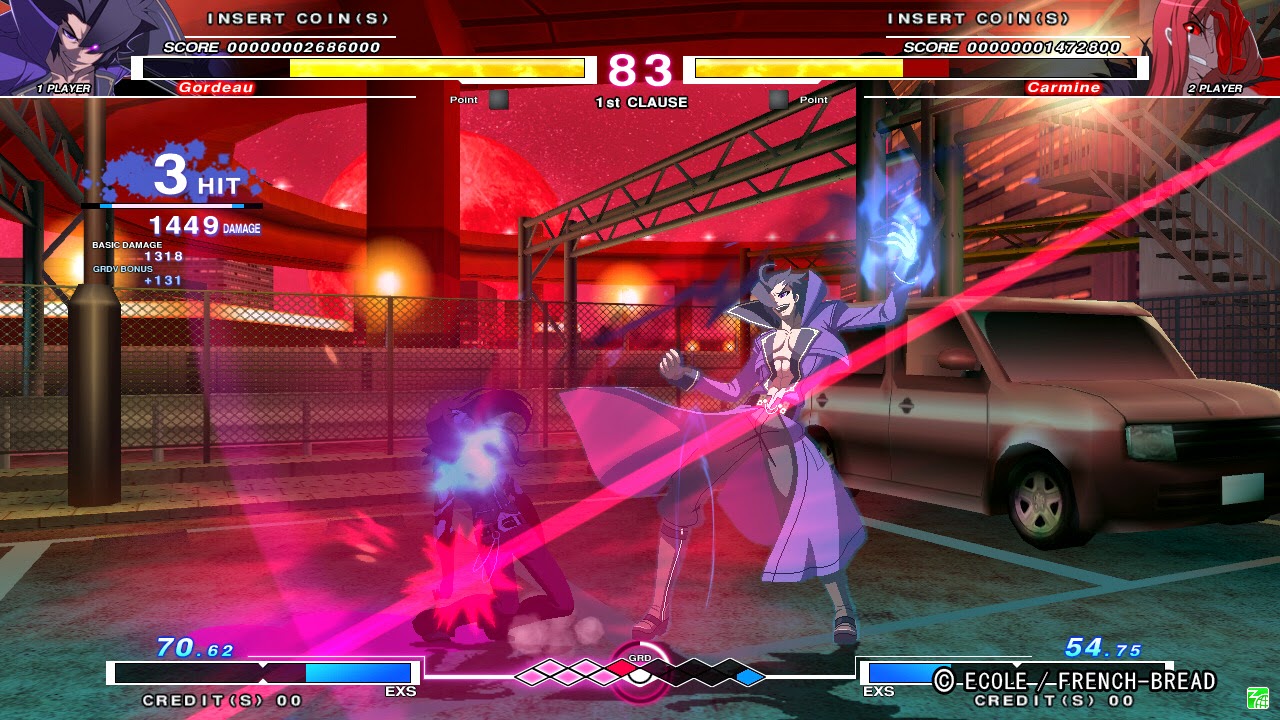 UNIEL features sixteen characters in total, from the likes of Bloody Mary drinker Carmine, to “Mr Tickle meets Yog-Sothoth” in Merkava, to Gordeau, master of ASSIMILATION . The cast is varied and all have their own unique element sort of like BlazBlue: Chronophantasma’s Drive mechanic, but instead these traits serve mainly as passive effects that you need to be aware of rather than necessarily focusing heavily on in your gameplay. Hyde’s sword attacks do chip damage for example, and then we have Sion Eltnum, who has a Gears of War style active reload mechanic for her pistol as just two examples. The character sprites are superb and the animations are fantastic to behold, but what I particularly approve of in the character design is the almost total lack of unjustified fanservice. On the sound design front, attacks feel like they have weight and impact behind them (Hyde’s rekka in particular feels great to pull off) which is always good for the feel of a fighting game. The OST is also superb, featuring a mix of rock, melodies and even dubstep, with my personal favourites being Hyde’s and Waldstein’s, although sadly Nanase’s theme (which I’ve not linked here because I’m pretty certain to do so would be a war crime under the Geneva Convention) is a full blown turkey amongst the rest, but overall the soundtrack is great. Finally, there are several stages that, while a bit bland, serve as decent enough backgrounds that also sell the desolation of the Hollow Night well enough. 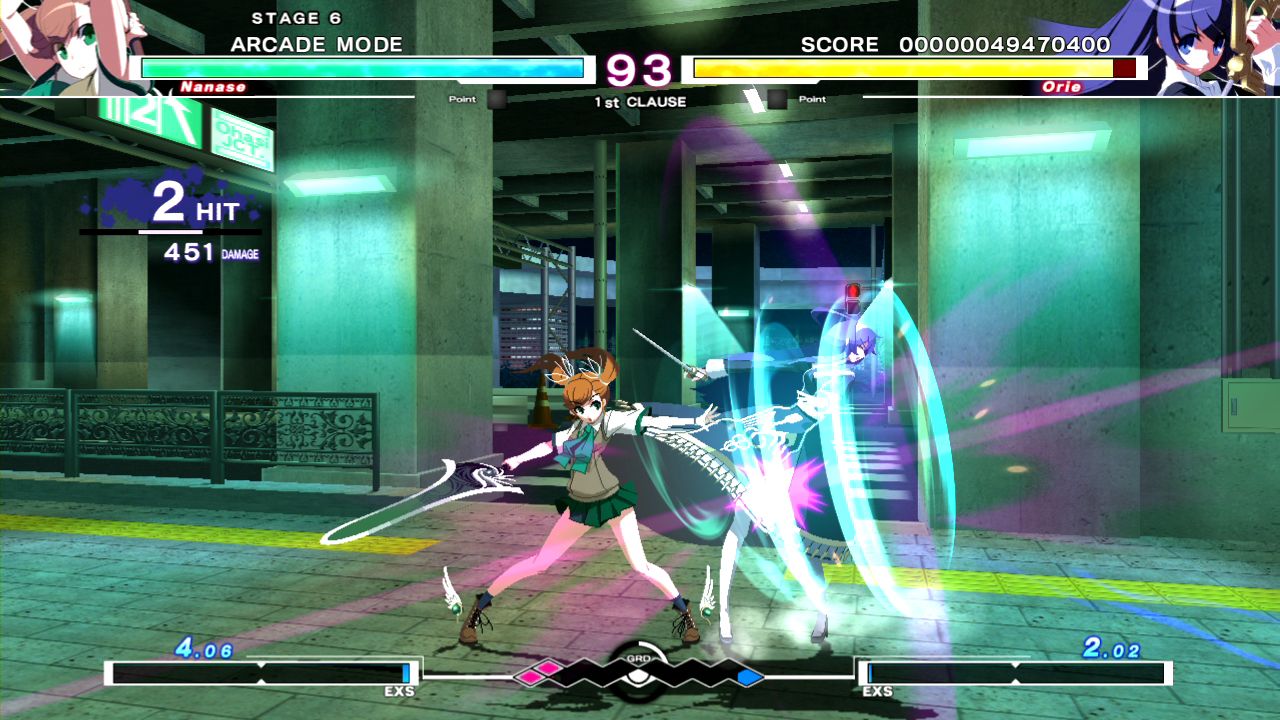 UNIEL’s online mode is a bit spartan, featuring only player rooms and ranked matches, but what makes it stand out, and I almost feel like this is like saying a car is the best in its class because it has four functioning wheels, is the netcode. I’ve had numerous issues with BlazBlue: Chronophantasma’s netcode (and to a lesser degree Persona 4 Arena’s) resulting in poor connections and lag spikes even to players in the UK, yet UNIEL features silky smooth play with even two bar connections. Generally speaking, players I’ve fought in BlazBlue whom I’ve then taken on in UNIEL have been far better experiences because, comparatively, the online experience has been less laggy overall. Matches that were like treading in mud in BlazBlue have been, while not flawless, markedly better in UNIEL. While the lack of an Arcade Lobby doesn’t help UNIEL’s online community, its superior netcode makes it the more fun experience in my opinion and Arc System Works frankly should be ashamed that they have been unable to accomplish this most basic and important of things in their own games. 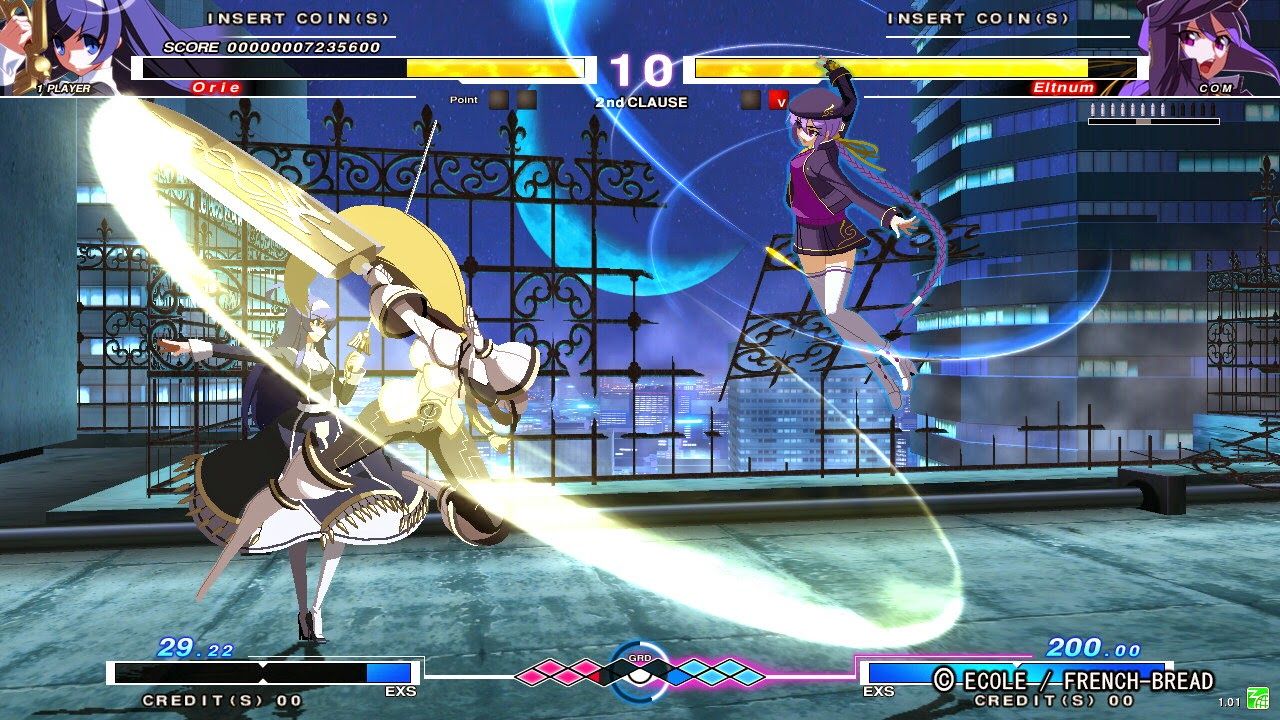 The thing about UNIEL is that it can seem bare bones relative to other fighting games as of late. But, to tie back to the point about fanservice that I mentioned, what French Bread have done is make a fighting game first and foremost. The mechanics are solid, the netcode robust, and there’s a general sense of purpose behind everything. UNIEL is certainly not a neophyte’s game, but for those jaded by poor asymmetrical balance in other games and bad netplay experiences it is a breath of fresh air. Indeed, what UNIEL does that I think the likes of BlazBlue: Chronophantasma do not (or to be more charitable, not to the same degree) is that it knows what it is and ultimately respects the player. It does not offer combos and explanations because it assumes you have the mental capacity to do your own research and try things out, and it does not try and saddle you with a bloated, overwrought story or immature fanservice. Plus, if you do stick around and persist beyond the somewhat steep learning curve, I think you’ll find a rewarding and enjoyable fighting game waiting for you. And hey, Gordeau’s got the best move in all of fighting game history, GRIM REAPAH, so what more could you ask for?

Who Should Buy?
- If you’ve been playing fighting games for a while and are looking for a solid, enjoyable new experience that respects your intelligence as a player, or are sick to death of bad netcode, UNIEL is for you.

Who Should Avoid?
- UNIEL is not a beginners game and I wouldn’t pretend otherwise. Also, if single player modes such as a full Story Mode are your thing you’d be best looking elsewhere.

- Shadon1010 knows it's two minutes to midnight, to kill the unborn in the womb...
Posted by JD at 11:31
Email ThisBlogThis!Share to TwitterShare to FacebookShare to Pinterest