Idea Factory has turned it's hand to the often imitated yet hard to perfect art of Card Battling. Since the dawn of Yu Gi Oh I have seen countless games try using card systems to bring in a different audience, from the often ignored Metal Gear Ac!d series to the outstanding forgotten gem Lost Kingdoms from the Gamecube. 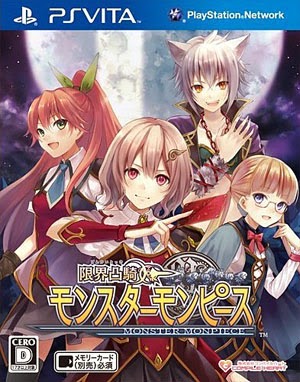 Of course as with most genres you have the shining points and then the blemishes that often occur, an over saturation of Yu Gi Oh games & it's kin haven't done much to keep this genre fresh. Where will Monster Monpiece stand & more importantly just how much "Fan service" is in this title?


(One image further down may be NSFW proceed as appropriate)

First off is the story, I'm just going to openly say this right now that the game isn't exactly orientated for story. What I mean by this is in the politest way that the story is utter bobbins/cack/rubbish, not to say that it's a horrible mess as it's got some really fantastic writing at points it's just the subject matter which causes it to be laughable.
You have the main cast of Mei, Fia, Elza and Karen who aim to be Monster Girl Card Masters!. Naturally as ever this doesn't pan out and Elza ends up getting taken over by a demon of sorts!. Time to step up on an epic journey around the world to stop the demon inside your friend and battle masters from all over.

With It being a card game the cards are the natural focus for it creating a rather silly story, people don't fight, they play cards. World consuming beasts are kept in cards and can be bought in bulk at the shop. It's all very silly but if you have come for a gripping story full of intricacies and explanations you'd be best served elsewhere. 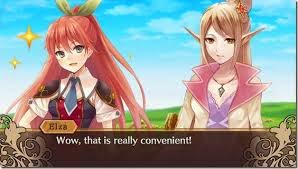 Gameplay is king (or queen as the game is female populated) in regards to Mon-Mon. As mentioned it's a card based game so you will spend hours tweeking your deck and chasing elusive cards to attain your lofty goals.

All this is done via a HQ Menu which is pretty much your main menu. You'll arrange deck, buy items, buy card packs, equip items, save & load, check settings and "rub" cards.

I'm going to "touch" (yeah I went there) on the card rubbing first, as ecchi and often embarrassing in public as it is, it's not as bad as it's been made out to be & it's not exactly time consuming either!. You don't have to do this to complete the main arc of the game and you can gather items that will do it off screen for you.

What this feature is basically comes down to "evolving" your card. In some cases it means more HP or ATK and in rare cases a downgrade such as lack of mobility or lower stats than before.
How do you this? You have the rub,pinch,tap or smack certain areas of your card until a meter fills up. Yes the areas are often questionable and the sounds certainly are!, this also causes your already provocative card to shed a little more clothing. Yeah this is where the controversy with this title is coming from, I can see why it's problem for some but hear me out.
I'm not a huge fan of Moe or Ecchi but I wouldn't judge anyone for it, personally for me I was in two minds loading this game up in regards to the content. Honestly it's minimal and doesn't effect the core gameplay in the slightest, it adds nothing yet detracts either. It's purely aesthetics.

The world map is bare bones, you have markers which your sprite jump between. When it reaches a marker it'll either be blank, have money, items, rub points, cards or an enemy. There are several gates you have to pass to get to the city where your tale continues but it's all very minimalist. 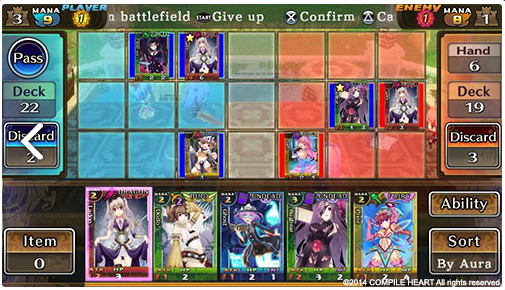 Cut scenes are similar in that nothing really happens in them. There are a few different sprites for different reactions but it's fairly stagnant and often nothing more than fluff and filler. More often than not I felt myself trying to skim a cut scene due to how ho hum the whole affair is.

The battles, this is the meat of the game and where quite rightly you'll want to spend the most time. Set on a board with a castle set at either end, you have an area of 9 squares, foe has the same, in the middle there is a 3 square down divide.
The objective of this game is to cause enough damage to the opponents castle, this is done by summoning Monster Girls and watch as they plod along the board to the other castle.

Your monster girl cards all have different attributes, some need to be next to an enemy to attack where as some a square away. Some are used for buffing attackers and some for healing them.
They all have a coloured aura and should you summon the same colour aura twice you get a small bonus, do that again and you get a huge bonus on all stats.
They all have a certain grouping such as Dragon or Beast, should you have two of these cards you can fuse them giving them combined stats and creating a force to be reckoned with.

All this is done using Mana, you are awarded 3 Mana per turn. You can gain additional Mana using card skills, items or just not summoning or using the full required Mana on a turn. Card Skills are another thing to take into account, they have passive skills such as auto heal & auto move but they can also have skills you can choose to activate such as Additional attack power or Gather 3 Mana upon summon and death. 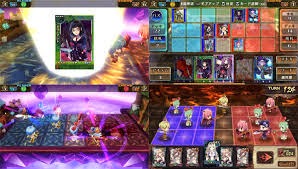 Finally you have items you can use in battle, these can help you gain health or mana, increase after battle spoils or just help the title of battle swing your way!.
Take all of this into account and you have yourself one hell of an addictive and strategic card game on your hands!. It could of used things just as trap cards to add another dimension but this is something they could easily remedy into a follow up title.

Overall I have really enjoyed & still enjoy Monster Monpiece, it's a fantastic pick and play title with the addictive nature that comes with card based games. The Ecchi may be an issue for some but as I have already stated it isn't a factor for me & I'm not a fan of that nature. The story is a little lacking and seem to be there just to give everyone an excuse to whip out cards and wage war on each other.
The appearance and layout is functional and works but a little space, it's clear that when this game was designed that they put the most effort into the gameplay and it's great to see that.

Posted by Andi at 12:49
Email ThisBlogThis!Share to TwitterShare to FacebookShare to Pinterest