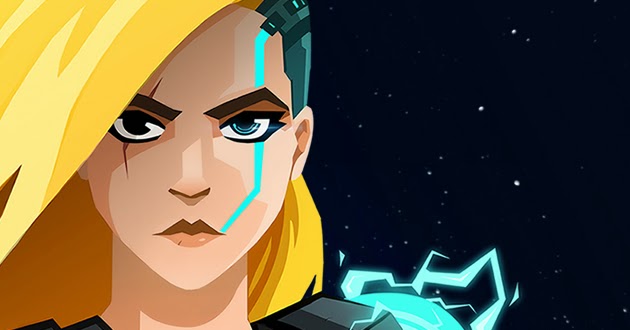 Before the indie revolution on Sony's Home consoles there was a period when they only lived on the PSP under the titles of minis. This is where it all started. Within some of these titles were some little gems which just needed a little something extra to make them really shine. Velocity is one of those titles. Originally released as a mini and then remastered for the Vita. From the popularity of this fans wanted something more and their calls were answered. Sometimes a sequel can kill a franchise if done wrong but in this case, Futurelabs just added more onto the already perfect formula. 2X is a game I have been keeping an eye since faking in love with the original title and I am so happy that I get the chance to review it for all our readers.

So, does Velocity 2X deserve a place next to its predecessor? Well, let me take you on a small space adventure. 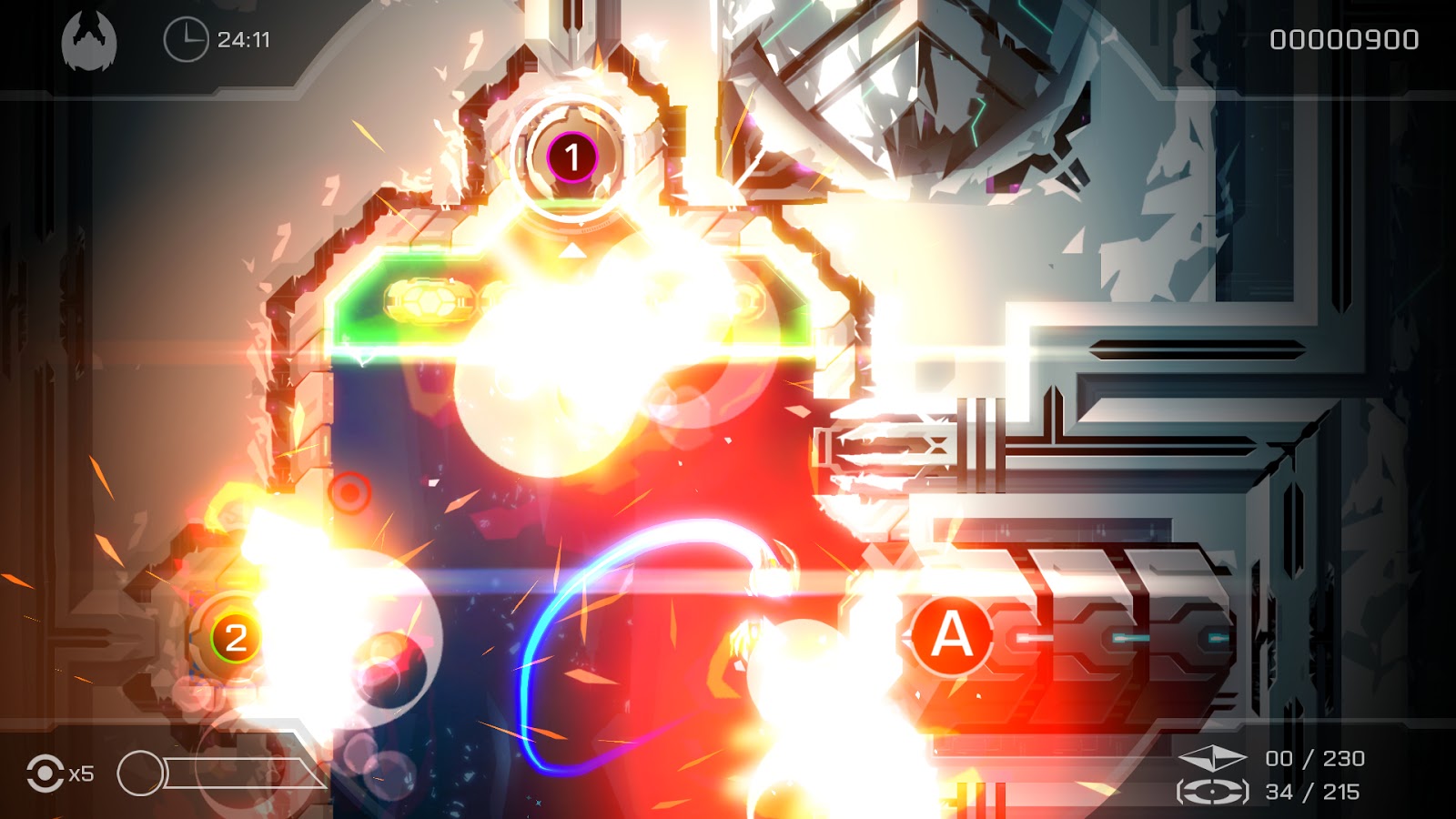 When you start playing the first few levels of Velocity 2X, not much has changed from the previous title. You still fly around vertical corridors in your very nimble Quarp jet, dodging enemy fire and collecting survivors. Again, to make the experience that little bit different the teleport function is still present but now it feels a lot smoother. I found myself on the previous title becoming stuck as the targeting system moved sluggishly across the map. Now the target is as smooth as the Quarp Jet. Once you learn the levels you will find yourself boosting and teleporting with very little difficulty. I feel that this is the one area in which the team at Futurelab has concentrated on the most as the controls are very tight. They wanted to give the players a smooth, enjoyable experience. As you play through the 50 levels you will get the sense of comfort in the fact that it is very familiar to the original and that is not a bad thing. This though, was not good enough for the team. I feel that they wanted to give the players more by expanding what can be done whilst playing though 2X. This came by bolting another genre type onto the shmup and in term creating a whole new gaming genre. 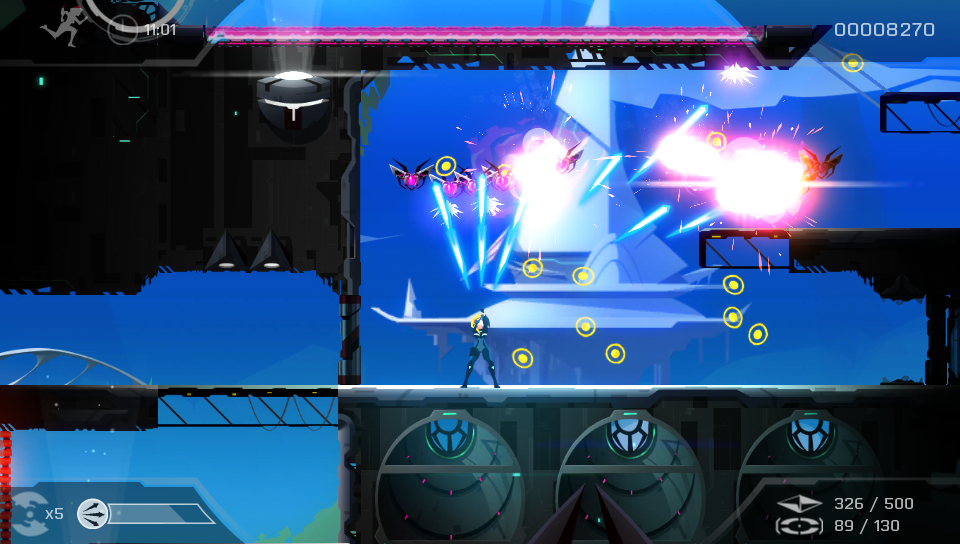 In 2X, Lt. Kai Tana can now leave her ship and have her own mini platforming adventure. I would not say it is the greatest achievement in gaming but it really adds a little more depth to the game. Most parts of the game require you to activate switches in number order to progress and some of these have to be done on foot. These section can be just as quick on the main part of the game and the most impressive thing is that Kai possesses all the abilities that her ship does. You can teleport through obstacles and slide under obstacles whilst boosting. Firing your weapon on the other hand is slightly different. Unlike in the main section where you can only fire in a straight line (or use bombs to four directions) you have the ability to fire in all directions. This is used to clear containers for crystals, defeating enemies and activating switches. Either way, this slight change in the control scheme makes these sections feel just as fun and manic as flying around in the Quarp Jet.

I original said that fusing genres together is not the greatest achievement here. The greatest achievement is how well they fused them together and how natural the game feels when you go from one section to another. Even as I played further and further into the game I was still impressed by how the transition does not affect the speed of the game - this is a game which encourages speed runs and these transitions do not hinder the experience. 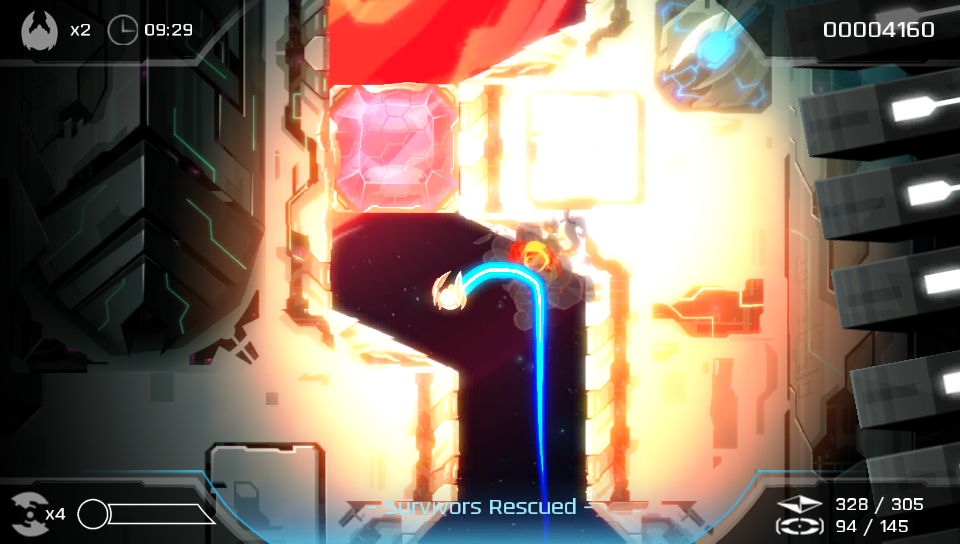 There now seems to be more structure to the story in Velocity 2X. In Velocity it felt like the story was bolted on at the end but here the game and story were built hand in hand. There are now gorgeous comic book style cutscenes with fully scripted characters and even the levels are split up with boss battles! These feel very old school in the way you fight them - you have to progress through different stages in order to fully defeat them.

There are three types of level present again. The hostile force style is when the truly feels like a shump. This is the only level type where enemies are always present and at some points there is so much going on that it is tough to work out what will hit you first. It can get a little crazy sometimes with the amount of bullets on screen (not Ikaruga level) and you will probably end up dying. I found myself dying the most during boss battles as this is where they put the majority of the action in the game. This is not an issue though as there are no lives in 2X; you just get put back a few seconds on the map so you have the chance to have another go. the only thing is causes issues for is if you are going for a perfect run and then it becomes a problem. By mixing these level types throughout it keeps the game interesting as you have to adjust your play style depending on which one you are currently attempting. Also, each style carries over into the side scrolling stage - the quicker levels are all about getting from one end to another in the shortest time by using all your skills whereas the hostile or rescue levels require some precise skill to progress.

If you wanted to you could just play the game from beginning to end without even thinking about what your score was but trust me at some point in the 50 levels you will start thinking that you can easily beat your last score. Once you begin doing this you will be adding countless amounts of hours into gaining that perfect medal! This basically means hitting all the levels targets in one run without dying and to get these later on in the game requires some skill and above all patients. it is like an addiction, once you get you one you will need to get them all. 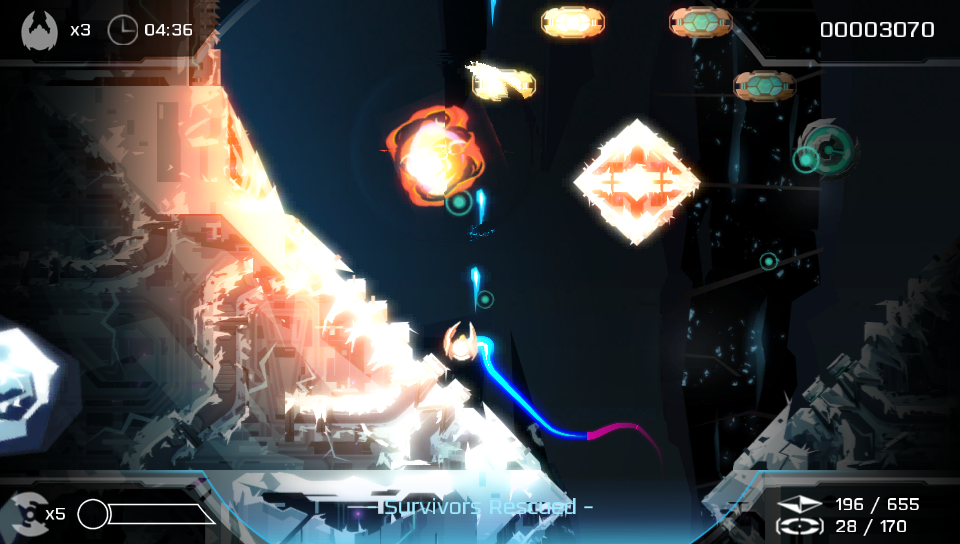 It looks fantastic on the PS4, which you would expect for the simple art style. What you are presented with are very detailed backdrops with adds that little bit more to the world created in 2X. The ship models are amazingly detailed. A lot of time has gone into making them look and feel realistic whilst playing. As you zip around the world you leave a trail of energy in your wake, you gunfire travels perfectly as it heads on its way to its final destination and the enemy explosions looks gorgeous. The lighting effects it brings to the table are just astonishing; every crystal shines of nearby surfaces and you ships trail glows as you move. For such a small game, you can see that the team have used all which is on offer whilst developing it for the PS4. The greatest achievement here is that it looks just as good on the Vita. The really wanted the player on the go to have exactly the same experience as the player sitting at home. Saying that though, 2X has cloud save and cross buy meaning that you can carry on playing 2X where ever you are. Velocity Ultra was a great game. So in turn I will say that Velocity 2x is a perfect sequel to a great game. What Futurelabs have done here is very impressive. It is not the fact that they have fussed two genres together, it is how well they have managed to blend them together. It is hard to think of many games which have tried this successfully but here it just works. The fast pace of each section compliment each other and it feels satisfying. What you have here is the right way to create a sequel; do not change the original formula - just add onto what has already made the previous great. Saying this though, this is maybe the only games downfall - there may be too much of a similar thing. I know that as humans we do not like too much change but some gamers will argue that all 2X is, is an upgrade, not a full sequel and a small part of me would have to agree to that. It is very hypocritical to say that change is good but they say humans don't like change but it is true. Gamers are the hardest group of people to please - too much change we hate it and too little we get bored. Yes, Velocity 2X is bigger than its predecessor and offers new elements to the table but at its core it is still the same fast paced vertical shooter. Do not get me wrong though, this is a title which all arcade game lovers should buy and small team at Futurelabs should be very proud of what they have achieved in the few years they have been on the scene. 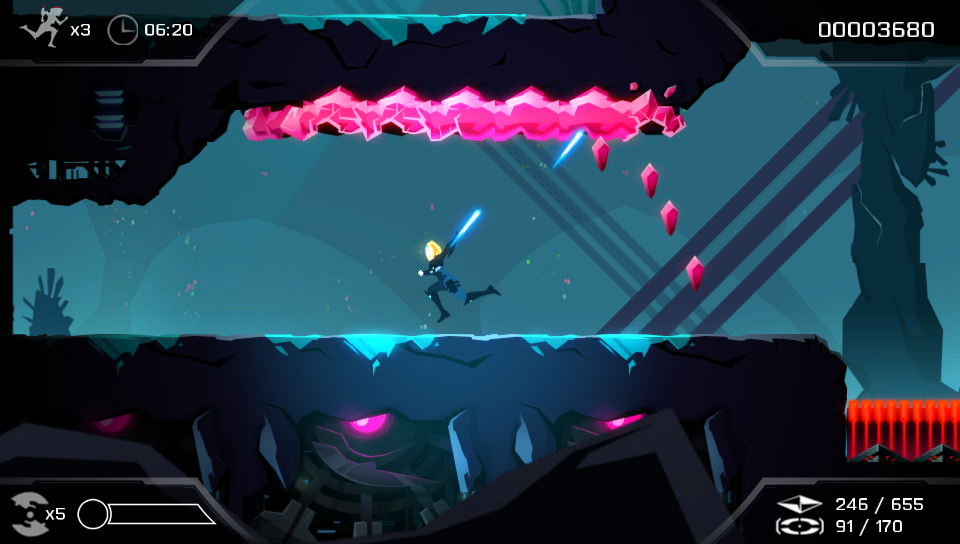 The studio listen to the players opinions from the previous title and took action upon it. The end result is this, Velocity 2X, a game made for the players. It is smart, beautiful, punishing and very hard to put down. Velocity 2X is a must own title for either your PS4 or Vita. It has a great pick up and go attitude. The levels are short and full of replay value and if you are a player who needs to 100% everything in a game, you are in for one hell of a ride with this one.

Who Should NOT Buy This?

Review copy supplied by Futurlabs
Posted by Unknown at 17:00
Email ThisBlogThis!Share to TwitterShare to FacebookShare to Pinterest