Recently we have been looking at further ways to expand our original writing, during our campaign for Yakuza 5 I had the idea of trying to ask some questions for prominent members of the Yakuza western community for fans and newcomers alike. 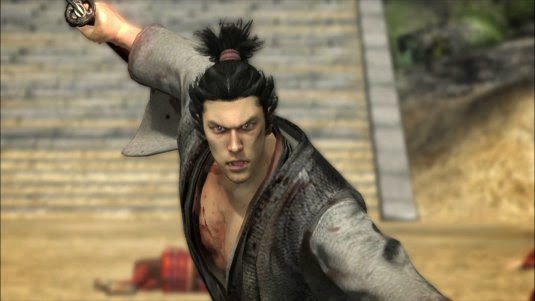 First off here is an interview conducted with Patrick Coffman, more known as The Patrick. Known for his Yakuza guides including the outstanding Kenzan! guide which I myself have used and personally swear by! you can find it HERE!.

- First off, thanks for agreeing to this it's a massive honour to be given this chance to speak to you as someone who swears by,
your Kenzan! guide. I have given you a brief introduction but would you just tell everyone who you are & what you do.


Well, thanks for the words of praise! It's really my pleasure, I think.
I'm just your typical video game fanatic, I suppose. I go through periods of spending the majority of my free time playing games.
It also happens that my major at university was the Japanese language, and so I took many courses in their literature and history. I figured I would use my Japanese knowledge to raise awareness for imported games--you know, I knew many people would enjoy the series, but that they would be unable to play them since they didn't know any Japanese. When I made my first RgG guide, I actually took it as a matter of course that the game would not make it to the West at all. I believe it took a year for them to announce localization plans, so they surprised me by releasing it in the U.S. and Europe. I regarded the game as a hidden gem and just wanted to help people find it more accessible, so I started writing the guide and answering questions on GameFAQs.


- As I mentioned you created a completely translated guide for Ryu Ga Gotoku Kenzan!, what originally spurred your decision to undertake such a task?.


I decided to work harder on the Kenzan! FAQ than the others primarily because I felt that title would be ignored by the fans.
I particularly like the Edo Period of Japanese history, so I found the game's setting to be quite appealing. However, as the game was in development, many people--including a large portion of the fanbase--seemed to regard it as a side game, like a card-battle game or slot machine offshoot. In reality, it's pretty much the same as a "canonical" RgG title, with familiar faces and things to do as in the other main games.
I realized its localization chances were very slim. Honestly, I was a bit surprised the second game was brought to the West, considering how poorly received the first game was in terms of sales. So, I (apparently rather correctly) deduced this title wouldn't make it into the hands of fans of the series. I put more detail into that guide in hopes to help people who would be able to appreciate the title. I have to apologize for the few larger errata in the guide as a result, but I hope my efforts helped some people out there get the most out of the game.


- It's staggering the amount of content in the guide, how long roughly did it for you to complete the guide to the level you were happy with it and was there any stage that you felt it wouldn't be completed?


I must admit writing the guide took up a great deal of my time. I think it took some 3 months to complete, with something like 8 hours a day at times.
As for thinking it might never be finished, that was practically a quotidian fear of mine, yes! There were some major obstacles to overcome, such as the weapons crafting segment of the game. I realize it's very difficult for people who can't read things such as necessary components to complete that part of the game, but I know some have been able to go through it all. When faced with how to represent that in a way that made sense, it seemed like presenting information was a daunting task, to say the least.


- Did you run into many problems when creating the guide?. Also were you ever contacted by Sega or any members of Sega in regards to it?. They seem to have taken to pulling RRG videos from off of Youtube lately.


I did run into quite a few problems. As I mentioned before, it was a difficult task to figure out how to represent things such as names of periferal items to people who couldn't even read what they were looking at. I included things like the system where I wrote the number of characters in responses to the brothel girls to try and give people a better idea of what they were looking at as they tried to get through it, but there are still some aspects of the game I'm not sure people can accomplish without some Japanese knowledge (for instance, the mini-game with the brothel girls where the player has to choose from cards strewn about the floor).
As for being contacted by SEGA, the only SEGA employees I have ever heard from have been Shôji Hidenori (one of the main composers) and (series producer) Nagoshi himself, but that was mainly in response to my comments via Twitter or on blogs.
I did have a few of my videos blocked by YouTube. I think that was because said videos included full cut-scenes. I suspect YouTube has some sort of bot-like program that scans videos for copyrighted materials (presumably to bar users from uploading movies), and so they were flagged. I responded via their own form to say that I was providing footage of a playthrough, rather than showing copyrighted movie material, and all videos eventually ended up online.


- Do you have any plans to tackle any other of the RRG titles like Ishin or the PSP titles?.


I'm ashamed to admit that I still have yet to acquire Ishin. The Bakumatsu Period of Japanese history in which the game is set is very interesting and I would definitely like to play it, but money and time are too tight these days. I would like to write a guide, but I would also like to get back to work on the one I was writing for RgG5 at some point. When my PS3 died, I lost my save data--and I had already put hundreds of hours into it!
As for the PSP titles, I have both of them in my possession, but I have not even unwrapped them. I simply don't play handhelds very often. There's something about staring at a small screen I just can't do for long periods of time--which is why I remain sans smart phone (like a proper Luddite).
I always hoped to play them on the "big screen." I hoped for a rerelease in the vein of the God of War PSP titles, but I now don't really see that happening. I'm quite curious how "syn Sophia" handled it, as I was a fan of their wrestling games when they were known as "AKI." In my dream world, we would have the action of the series farmed out to Platinum. Actually, in a perfect world, the action would be handled by Kamiya Hideki--but I know he has said many times that he basically has zero interest in the RgG games!


- You became active again on Twitter around the announcement of RRG 0, Is this a title you are looking forward to? What are your hopes for this title & in your honest opinion do you feel are the chances of it leaving Japan.


Oh, yes--I am looking forward to RgG0! I do have some qualms about it, though, at the same time.
To be quite honest, I was a bit disheartened by 5. The series had, indeed, become a bit stale through RgG4 and Of The End (Dark Souls), and so, I think they had the right idea about rebuilding everything.
However, I found that the finished product did not address many things that needed work in the series. The action and load times in the game were actually even slower and clunkier than its predecessors, for instance. This sluggish clunkiness combined with the extreme addition of side-game-like content really did make the game a bit of a chore, at times.
I know this doesn't sound like something a fan should say, but I do hope they pare things down and get back to basics this time around.
As for its localization, I fear SEGA has abandoned the series as projects for release outside Japan. I have a few friends who were hoping to get RgG1&2 HD in the West, for instance, and even that didn't make it over.


- You started working on the Kenzan cutscene translations before your Ps3 died, is this something you are still going to undertake & have you seen the ones put out by KHH Subs?.


I would love to get back into my video walkthrough of Kenzan!, but I haven't had the time. Unfortunately, I did not have PlayStation+ at the time--so, no "cloud" storage--and so my saves were all lost when my PS3 died. That means I would have to basically do everything again, from scratch, to reach the point in the game I was at in the walkthrough.
I actually only watched a few of KHHSubs's uploads, but the ones I watched were very well done. I believe he is still active, so I'd expect more to come!


- Finally it's been amazing to have this chance to talk with you, do you have any projects lined up in the future & for anyone interested whatis the best way to contact you about these?.


The first thing I'd like to do is to completely rewrite my guides for RgG1 & RgG2. I went back and replayed the titles when they were rereleased on the PS3, and when I went back to my guides for them, I found them incomplete, full of errors and--to be honest--not written very well.
After that, I would like to finish my guides for RgG4 and 5, and then possibly start on Ishin and 0. As I mentioned before, though, these guides really do take up a prodigious amount of time, and I am at a point in life where free time seems almost unattainable.
Anyone who wishes to contact me about the guides can feel free to give me a shout at Twitter (hatoriki) or Facebook, or at my PlayStation account (hatoriki_kai). I have to note that almost never actually check the e-mail listed in the guides as it has become a spam magnet. I think this is possibly because I listed it in the guides! The best way to contact me through e-mails would be coffman (underscore) patrick (at) yahoo (dot) com. I wrote it like that to try and avoid a sea of spam!
I would also like to note that anyone contacting me through Facebook should please identify themselves. I've had a lot of strange friend requests, and I generally ignore them unless they come right out and say they are fans of the series.

Anyway, thanks for the opportunity to talk about one of my favorite game series. It's always a pleasure!.

I would just like to once again thank Patrick for taking the time to talk to us & personally for his Kenzan! guide. Anyone following the Kenzan! diary should know that it wouldn't be possible without this very guide.
I hope you found this as informative and entertaining as I did & would love to do more stuff with Patrick in the future!.

Posted by Andi at 14:17
Email ThisBlogThis!Share to TwitterShare to FacebookShare to Pinterest