Through the fire & the flames!


Dragon Quest Heroes: The World's Tree & The Blight Below (breathe) is the new collaboration between Omega Force of Dynasty Warriors fame and the little known company Square Enix. Overseen by long time Yuji Horii, Omega Force are once again trying to capture the lightning in a bottle they had with the brilliant Hyrule Warriors only this time using JRPG juggernaut Dragon Quest. 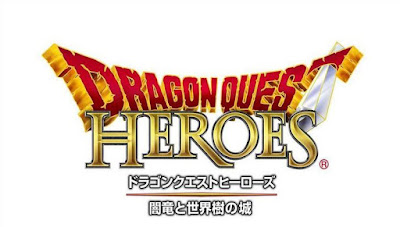 How will the tried and tested Musou formula suit the intricate and often mysterious world of Dragon Quest?, Will it manage to strike a balance between action and adventure & finally will it bring in a new set of fans for both?

Dragon Quest Heroes released Feb 2015 in Japan and it chronicles the adventure of Act & Meer as they fight against the many evil beings trying to take over the kingdom and destroy the World Tree. Releasing both on the Playstation 3 and 4 this is the first time in quite some time, especially as far as Europe is concerned where Sony have been given Dragon Quest. In a move to create wider appeal SE brought on Omega Force to make this a much more action filled, fast paced hack & slash title with lashings of Dragon Quest staples.

In regards to the story there isn't too much I can say, as unfortunately my Japanese is restricted to less than 10 words and even then it's rusty so for this review I won't be taking story into account. I will say that the cutscenes are brilliant and you do get a small idea of what is happening but due to it's JRPG base A LOT of content is hidden within the text and character interactions.

The cast is made up of original characters for this game and returning characters such as Jessica and Yangus from DQ 8, Terry from Dragon Quest VI & Maya from Dragon Quets IV. As you can expect from such a title even the NPC are made up from the various titles so don't be surprised to see the almost legendary Blacksmith character model looming over his store counter. 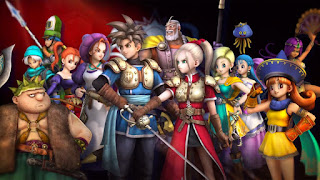 The in game music is a mix of new original tracks alongside revamps, remixes and re-imaginations of previous Dragon Quest songs which will surely invoke any nostalgia. From what I can tell the voice acting at least for the native Japanese is spot on & the monsters all sound crisp, it really has benefited being on a home console with Blu Ray as they can really squeeze everything out of the audio. On that subject expect to hear all the familiar jingles you would, nothing makes me happier than during a level hearing that iconic Level Up jingle.

Visually the game is a treat, playing it through on the PS4 I was treated to some lush and colourful visuals, silky smooth gameplay to go along with the unit count on screen. The setting is the standard Dragon Quest medieval setting lavished with the nuances of DQ, the HP hit markers litter the screen during combat and each and every monster in the game is a faithful recreation of familiar monsters.

Gameplay now and straight off I have to stress that this ISN'T an RPG, it plays nearly identically to any Musou game you may of played. For those unfamiliar with Musou think giant battle fields, hack and slash action & battle field awareness, only this time around they have mixed it up with Tower Defense! 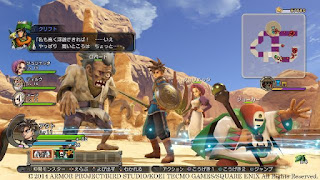 The combat is simple to start with but after a while you'll pick up the more advanced moves and notice how deep it can be, weak attack, strong attack and 3 special attacks, varying combos and sheer enemy count keep this title from being stale. Unlike most Musou games where you have several small camps and 1 main camp, this game is mainly made up of 1 main base you have to protect. The base is the World Tree sapling and you have to stop the incoming hordes from destroying it, to do this you'll need to summon some monsters to keep it safe while you close off the spawn points.
During battle some monsters will drop coins, these coins allow you to summon some of the monsters within the game to either Defend an area, perform an attack or Buff/Debuff depending on the monster.

This adds another level of strategy not seen in any recent Musou title and is honestly very welcome, it can be a little strange at first going in expecting full Musou especially as the first few levels are standard get to the end and wipe everything out affairs.

Alongside these you also have boss battles which usually pit you against gigantic monsters surrounded by hordes of smaller ones, which is a fantastic way of seeing just how capable the system they have developed for this game is. 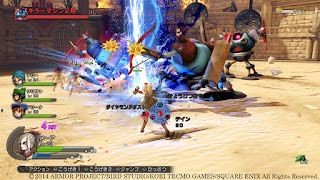 In typical Dragon Quest style you are given an M.P meter which dictates how many special attacks you can pull off before it depletes. Ether bottles or waiting over time refill this, but you can also find medicinal herbs scattered around the levels as well as Gold to help buy your characters new equipment.

The campaign weighs in at around the 15 hour mark first time around, plenty of post game content in the form of free battles, dlc missions and side quests. As with all Musou games you will get bang for your buck even if you fly through the main story quicker than most.

Overall I enjoyed the time I poured into Dragon Quest regardless of the language barrier. It's such a fun title which just oozes quality and is an ode to Dragon Quest over the years, the system it uses and how pick up & play it is should welcome newbies and fans of DQ & Musou alike!. The game launches in October in the US & Europe and I implore any Musou fan, any Dragon Quest fan and anyone who is into quirky and addictive games to check this title out.

Posted by Andi at 10:45
Email ThisBlogThis!Share to TwitterShare to FacebookShare to Pinterest